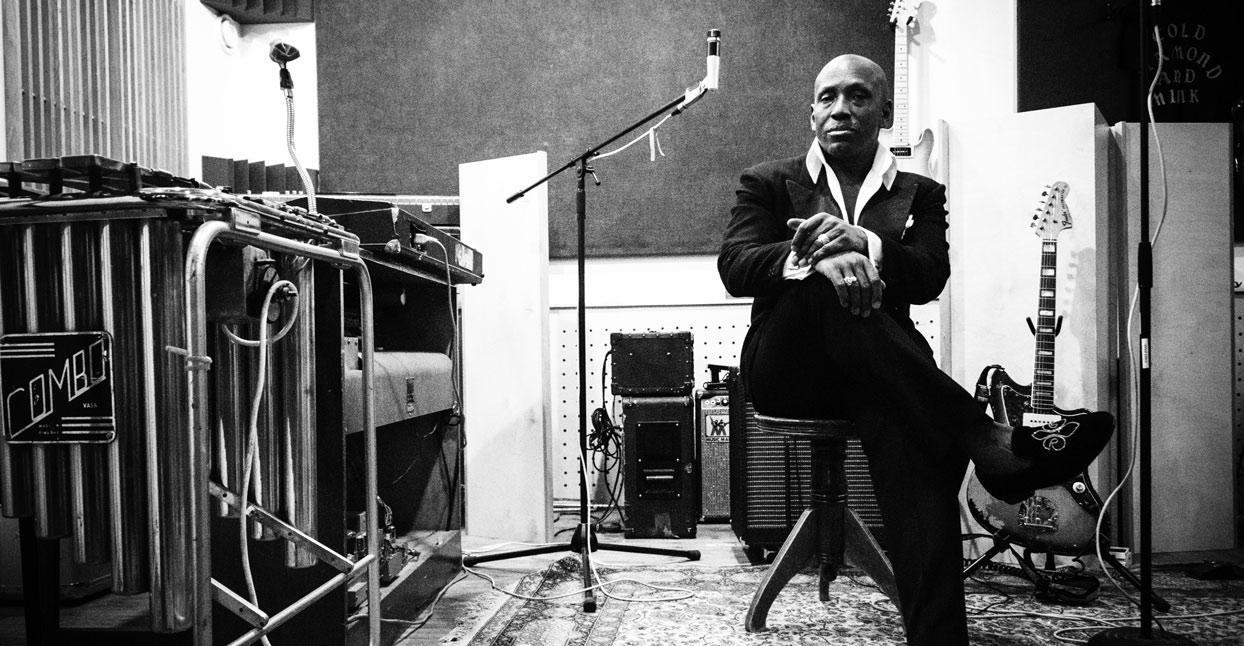 Holding court at Jimmy’s Corner, a vintage bar in Manhattan’s Times Square where the jukebox rolls out classics from the Stax and Curtom labels, the soul singer Carlton Jumel Smith tells an anecdote about James Brown gifting him a bowtie he’d been wearing on stage during a show. According to the 59-year-old Smith, who grew up in Spanish Harlem, he then wore Brown’s bowtie for good luck during a successful audition to portray the funk hero in director Barry Levinson’s 1999 movie Liberty Heights. Just as this series of events begins to sound like a fanciful tale being spun by an old timer, Smith pulls his laptop out of his backpack and opens up pictures of him and Brown, complete with the fabled bowtie.

“James Brown is my idol,” says Smith, adding that his “world was changed” after he witnessed Brown perform at the Apollo when he was just eight years old. Since then, Smith has carved out a respectable music career for himself, even if his releases have so far flown under the popular radar. His latest album, 1634 Lexington Avenue, seems set to usher him into the current retro soul circle headed up by Lee Fields and Durand Jones. It’s a warm LP, released on the Finnish label Timmion, a living love letter to the tone and tenor of classic ‘60s and ‘70s soul. Smith’s soaring, emotive voice is backed by rustic drums and gritty stabs of brass provided by the label’s house band, Cold Diamond & Mink.

Smith’s long-standing love affair with soul music was sparked as a kid when his mother would send him off on Saturdays with the money to buy a ticket to Harlem’s legendary Apollo venue, and a bag of donuts; he’d camp out at the front of the stage, snagging autographs and snapping photos with the artists that would become his idols. Around this time, Smith also recalls pestering his mom to let him dress in a “green polyester suit with sequins,” in a bid to replicate the stage fashions of the day. Later in life, Smith remembers hanging at a “little hole-in-the-wall nightclub” in Harlem, which became an after-hours spot for big name artists who’d played Radio City Music Hall earlier in the evening: “As soon as you went in you knew everyone had been to prison—which made it the safest place, because nothing’s going to happen. But on any given night you’d have George Benson or Stevie Wonder in there playing with the local cats who never quite made it. They used to call them cutting contests.” (Smith also has the names of his musical heroes tattooed down his right and left arms, including James Brown, Al Green, and Sam Cooke.)

While gigging around the world and performing in countries like China and Turkey—where Smith’s face was plastered on a giant billboard to promote a show that was a mix of original material plus covers of classics—the genial singer has proven adept at stumbling into fortuitous opportunities. One of these interactions paved the way to recording 1634 Lexington Avenue. After a show at the Casino Ray venue in Helsinki, Smith was invited to a jam session led by the Finnish artist Pratt, of the Timmion duo Pratt & Moody. Pratt asked Smith to join him on stage, they bonded, and Pratt brought Smith to the Timmion team at their offices. When Smith was played a track the crew were working on, he began singing along—and quickly cut the single “I Can’t Love You Anymore,” a deep, bluesy slab of soul that features Smith breaking into a falsetto. It became his first release for the label, and the spark for 1634 Lexington Avenue.

Paying tribute to Smith’s talent, Sami Kantelinen of Timmion says, “Carlton’s song writing is much about tradition. His voice has a very dynamic range. I think he had been mostly using his explosive style, but we urged him to discover his softer tone too.” Kantelinen adds they wanted 1634 Lexington Avenue to resonate as “a timeless soul album” in a bid to “encapsulate Carlton’s presence and style.”

Right from the get-go, the album comes good on striking a timeless note, while also conveying Smith’s superfan-style enthusiasm and encyclopedic knowledge of soul music. The opening track, “Woman You Made Me,” is based around a buoyant, horn-fortified groove. At one point, Smith trills the lines, “I can’t help but think about you all the time / Like Sam Cooke said, you’re always on my mind.” It’s a lovingly referential lyric; Cooke’s name, tattooed on Smith’s arm, links his contemporary songwriting back to the vintage soul sounds of the past and sums up his deep devotion to the genre. “I hope you can feel and identify with something in my music because it’s honest,” says Smith. “Music is the reason we’re all here—I’ve often said lyrics plus music equals your life.”