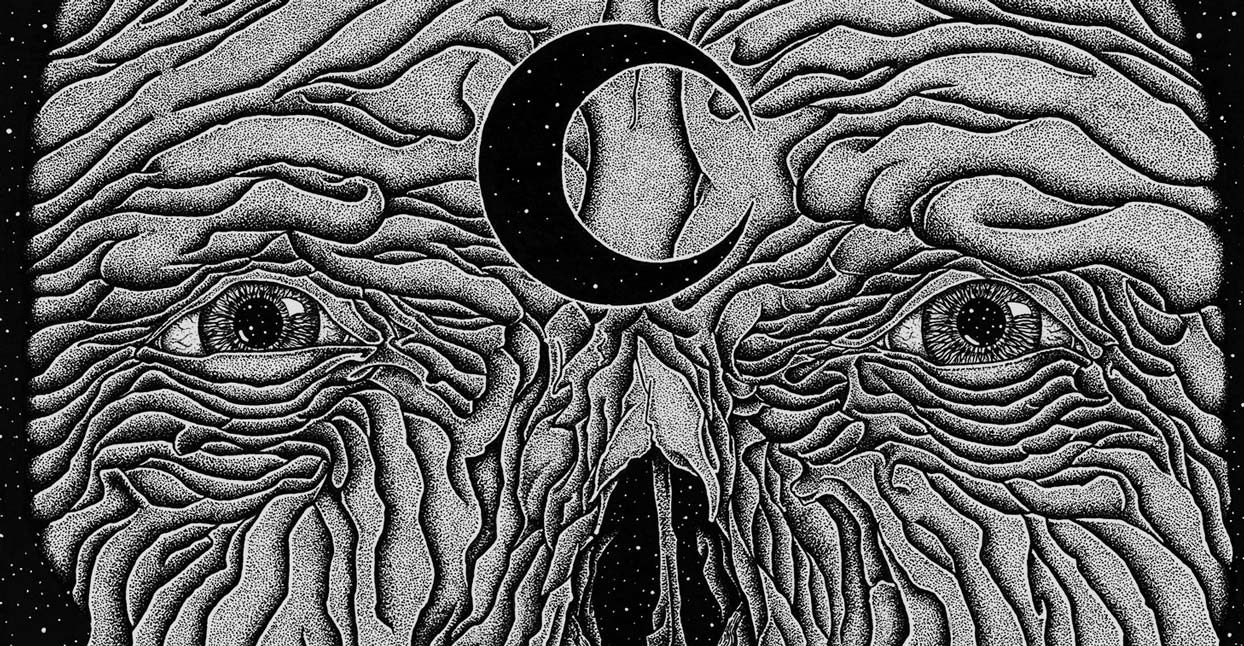 Call of the Void aren’t exactly a by-the-books grindcore outfit. Though their sound is rife with blast beats, nihilism, and chaotic fury, there are unbelievably heavy sludge riffs, thunderous crust-metal polyrhythms, and bit of the brash aggression of ‘80s hardcore mixed in too.

Founding member Patrick Albert attributes their sound to the fertile scene of extreme bands located in the Denver/Boulder region that have inspired him to draw from several different subgenre wells. Like-minded members of Call of the Void’s cohort—Primitive Man, Blood Incantation, and Vermin Womb—have never colored fully inside the genre lines, interested more in the pursuit of heaviness and intensity by any device necessary. Call of the Void’s newest EP, AYFKM (produced by go-to metal engineer Dave Otero),  continues to polish the sound they developed on their previous releases,  Dragged Down a Dead End Path and Ageless.

We spoke to them about all the elements that came together on AYFKM, including their punk influences, and keeping the flame burning without burning out.

You mention punk rock quite a bit, is that an influence?

There’s a part in this stoner rock documentary called Such Hawks, Such Hounds where they talk about being old punk dudes that just slowed down punk songs and then became a doom band. That really resonated with me. It really is all just the same music just played at different tunings and different speeds. A lot of people call us grindcore, but none of us really listen to grindcore music whatsoever. We have blast beats but that’s about it.

Punk riffs are the best riffs; timeless classic music. We wanted to do all versions of that. The first song [on AYFKM], “Get in the Van,” is obviously an homage to Henry Rollins. The whole concept of that song is that I wanted to take a sludge riff at the beginning, so a little homage to Carnivore and Sleep’s Dopesmoker and then use it again as the chorus just played faster. That’s pretty much what we do: we like the sludge and then we play it at punk speeds.

What is the songwriting process like? Is it collaborative or is it more of a solitary exercise?

Mainly I write the songs. We got back from tour; it was the worst tour we had ever done. I had a wild hair up my ass to learn how to play drums. I wanted to take a different approach to writing music, so instead of me writing guitar riffs, I wanted to write a song on drums, demo some stuff out and have the rest of the band add their personal playing style to it.  I’ve never done that before. Usually what happens is, I’ll bring a song to the jam space and we’ll work on it, change things; people will come up with different ideas. There are three songs that I wrote on drums first.

Dave Otero of Flatline Audio—he’s a big name in the production of extreme music. He’s also a Denver guy; did you know him before doing AYFKM?

We did. Gordon [Kock, drummer] and I had a sludge band called Black Sleep of Kali and we recorded with him once; obviously he’s got a great reputation. We wanted to keep it in Denver; usually we go to Salt Lake City to record with our buddy Andy Patterson.

Dave is a mastermind. He’s got the ear. He started in Boulder. Flatline Audio was in his Mom’s basement for the longest time.

Usually, we like to get out of Denver, we like the vibe when it’s strictly recording. When we record here in Denver, we go into town and Dave only records like nine to five, then you go back home and hang out. I just don’t like that; I like getting up and going to the studio and leaving when you’re ready to leave; sometimes it’s nine o’clock at night, sometimes it’s four in the morning. That’s what I prefer. I think it’s better for creativity purposes, not staying on a strict schedule.

In the future, we’re probably going to go to Salt Lake City for recording and go to Dave for vocals and mixing and mastering. I like having two sets of ears on it.

How long has Call of the Void been a functioning band?

Gordon and I had been playing together for like 10 years in various bands. Call of the Void has technically been around for 10 years, but there have been a lot of stops and starts. Around 2011, we actually found a couple of dudes who were pretty solid and decided to take it full force. All the pieces just fell together.

Everybody wants to be in a band until it’s time to put in the hard work and hit the road for weeks at a time. Was it a challenge to get full-time members in the band?

When we got picked up by Relapse, I didn’t think our singer at the time, Steve (Vanica), wanted it to be as serious as it was actually going to turn out to be. That pretty much lead to him leaving eventually. We then added a second guitar player. We had a guy that had been in an earlier version of the band and we added him; it turned out he didn’t like touring and that led to his eventual leaving as well. Now we have a solid crew, everybody has the right mindset; everyone is ready to go. The road has been extremely pleasurable because of that.

10 years is a nice chunk of time for a band to develop. Has the vision of the band changed at all over the years?

When the drummer and I started out, we were really into the Dillinger Escape Plan and Converge; we were into being technical and doing whatever we could to push out musical abilities. We decided finally, after screwing up live, that maybe technical music wasn’t for us! We decided to strip our music down with hardcore punk being our basis and making it as heavy as possible. We’ve gone through different versions of being more sludge-heavy, more punk heavy, more doom-heavy and finally, after all these years, we’ve been able to put it all together in a way that we feel comfortable. Every version of the band was confusing to people. I still feel like we’re a little confusing to people, but I feel like over time we’ve been able to get it down to something that maybe after you hear one album and then hear some other material, you can figure out what we’re doing.

Did having different members coming in and out affect the creative process of the band?

The new guy, Nathan Siegrist, is way better than me at playing guitar. He picked up our music and has been able to add his own take on it.  It’s taken a little while, but after playing shows together and writing together, he knows exactly what he wants to do and is super-stoked to get things rolling.

What is the backstory behind the name of the EP—AYFKM, or “Are You Fucking Kidding Me?”

It’s kind of a joke; it’s kind of not a joke. I really wanted to do a super punky record. We like to make fun of ourselves even though we’re very serious about it. We’re very disappointed in a lot of things and “Are You Fucking Kidding Me” describes that. It’s weird because we say it and sort of smile at each other.