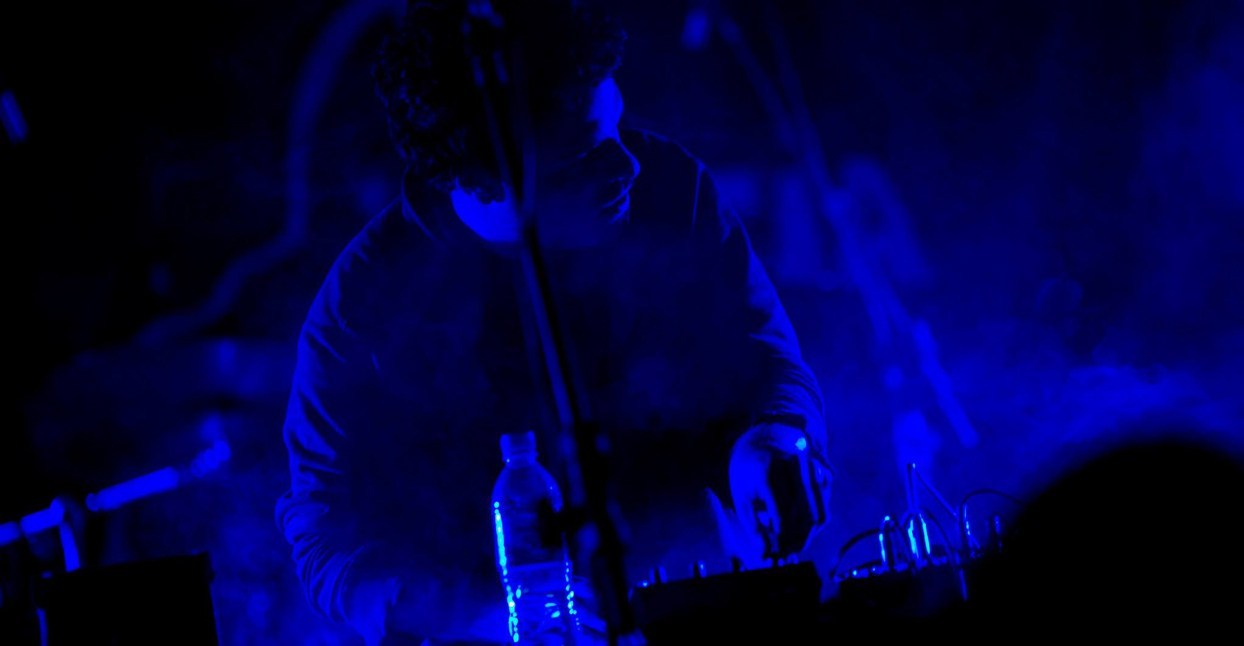 Cadu Tenório learned about dissonance early. His first acoustic guitar, given to him by his uncle, had a large hole in the top, covered with adhesive glue. “It was impossible to tune the guitar in a conventional way,” he says, “so I had little choice but to start making noises with it.”

Tenório has been making an awful racket ever since. The Rio-based Brazilian musician has created a sprawling, clattering discography, influenced by industrial and experimental performers such as Throbbing Gristle, Stockhausen, and Masonna. Like many noise musicians, he’s also been influenced by technology itself; as a child, he’d spend hours recording his broken guitar along with radio programs, toys, or room noises.

After dabbling in hardcore as a teen (“I had a certain ability to scream,” he says) his first serious band, Sobre A Máquina, grew out of his job at a record store. He decided to share some demos with fellow employees and musicians Emygdio and Ricardo Gameiro. He figured they would think it was a “joke, not even a song,” he says—but instead, they wanted to record his compositions. The result was an experimental rock band with grooves that constantly teeter on the edges of ambience and noise squall. On the 2011 album Areia, Tenório is credited with “composition, synths, beats, amplified objects, and other electronics,” while Emygdio and Gameiro play guitars and Russian ex-pat Alex Zhem plays sax. The result sounds a bit like Sonic Youth mugged by robots.

Tenório’s best known work outside Brazil is probably the solo power electronics project VICTIM! (or V!). U.S. label Fusty Cunt Tapes has released his albums under that name since 2013. VICTIM! “deals with very personal traumas, and with obsessions, psychological degradation. It is a project where violence and weight are the essences,” Tenório says. The track “Parede” from his short 2013 album Lar, verges on harsh noise wall in its intensity, though there’s a minor-key, melancholy melody buried under the feedback.

Tenório has also been influenced by Brazilian performers like Arnaldo Antunes and Tom Zé, and some of his most exciting projects combine Brazilian traditions with noise. In 2013, he collaborated with MPB Brazilian singer Alice Caymmi to record a song by classic Tropicália composer and singer Jards Macalé. Tenório frames Caymmi’s impassioned torch song vocal with stuttering bursts of static and crashes of noise on the first track. On the second, the crunch and smash is mixed up front, with Caymmi’s voice a background echo, as if she’s wandering lost through a gigantic, empty factory.

In 2016, Tenório collaborated with scholar and singer Juçara Marçal on the album Anganga—which, Tenório says “was a gift.” The two met at a show in Rio, and soon began to discuss the possibility of a record of songs by enslaved miners—music first collected by Aires da Mata Machado Filho and performed most famously on the 1982 album O Canto dos Escravos. The songs, Tenório says, “are already beautiful without accompaniment, so I wanted to create pieces that would bring the weight, the anguish of being there, and still find in the music a glimmer of hope and freedom.” Marçal’s pure, clear voice is a shocking contrast with Tenório’s grime-stained blasts of tortured electronics.

Tenório’s most recent project has been a three-year multimedia text/music online amalgam called Corrupted Data. Tenório was inspired by the myth of the Blue Whale Challenge—an urban legend/moral panic about an online contest which encourages participants to perform various tasks, ending in suicide. “I’m interested in how fictions direct our understanding of the world, how they come to be real, whether from our faith or how we resignify things around us, or how we reattribute our memory,” Tenório says. Corrupted Data consists of two albums, with song titles that are often quotes from various sources (especially the anime Serial Experiments Lain). There’s also a website with mysterious flickering symbols and links to more texts and quotes. You can Google around to find the sources of the words while listening to the albums; it’s like wandering through a maze composed of words and blank walls.

Tenório has various projects in mind for the next year or so. He’s contemplating another album with Juçara Marçal, and will release a collaboration later this year with Vitor Brauer (Lupe de Lupe) and Felipe Pacheco (Baleia). He’s also trying to tour outside Brazil, an “old dream” for him. Whether that happens, though, one thing is for sure; Tenório’s future will continue his noisy, adventurous trajectory.