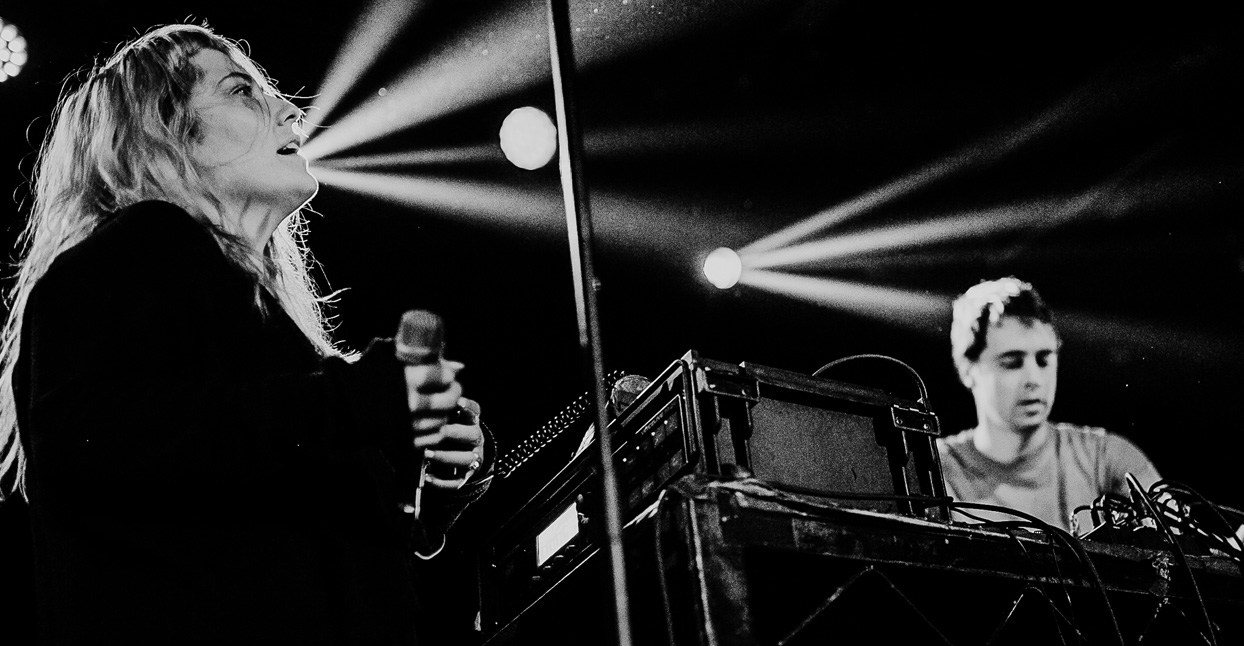 “I can no longer run away from things the way I used to be able to.”

That’s Jae Matthews, vocalist of Western Massachusetts darkwave duo Boy Harsher, talking about the role of escapism in the group’s oeuvre at large. She and Gus Muller, who handles most of the synths and programming, have been making dark, soulful, synth-based music since 2013. The idea of movement, of leaving, of dropping everything, is a consistent theme throughout their catalog, especially on 2017’s Country Girl EP and their new LP, Careful. Careful is released on their own imprint, Nude Club Records, and it is a triumph; they’ve been through the fire, and have used those experiences to forge a testament to vulnerability and honesty.

Music wasn’t a major force for either member in early childhood, though Matthews mentions hearing her father, at one point a Methodist minister, singing constantly around the house. Matthews and Muller both began going to DIY shows in high school. “There was a cool venue in Northampton,” says Muller, “and I would see anything that I could that I thought was cool.” Punk grabbed him immediately, and that independent spirit has stayed with him as he’s grown. Matthews grew up in upstate New York, something she calls “a much bleaker situation” than Northampton. She lived a bit outside Utica, a place where seeing a show was not an impossibility, but she frequently had to drive to Rochester or Buffalo to see an act like Cursive.

Matthews is upfront about the roles of loss and trauma in her life. Her father died when she was 16 years old, and her mother has battled against alcoholism for much of her life. “I went through a lot of grief in a small window,” she says, “which maybe was a formative window. Years 14 to 17 felt like a lot of bad shit happening. I spent a lot of time reflecting or being depressed, and I don’t think I felt independent until I left for college. I had no real rebellion, because there was nothing to rebel against. I had an intense relationship with my mom, but I never really rebelled. She’s just a narcissist—it’s impossible to rebel against that.”

Careful is the duo’s sixth slab of wax, despite serious ups and downs in their working relationship. The album’s title is a reference to that, as is the unsettling, personal title track: a combination of dark ambient textures and what sounds like a voicemail message, alluding to periods of communicative distance and offering a plea to be safe. Matthews recounts the story of the painful performance in which they played an extended version of the dark, abrasive dirge “Cry Fest” from their LP Yr Body Is Nothing—“We had done Boy Harsher for a couple years, but not recorded anything. Then we had a really sloppy break-up in Savannah, Georgia, and our conflict crystallized at a festival we had booked. It was a great show, but we couldn’t even be in the same room to talk, let alone agree on a set. We both showed up at the gig with our own plans. My plan was to get tattooed, and Gus ripped some noise. A friend who was masked because they didn’t want to get in trouble tattooed ‘Careful’ on my back while I held the mic to my chest, while Gus was in the back. Eventually he threw a candle at a wall out of pure angst.”

“I think we were going at a really high velocity before,” she continues, talking about what it’s taken to come back together, “and sometimes you have to stop and move a little slower. The lesson was important. Time to take a break. I moved out of Savannah after that. You have to reclaim your autonomy and then if something’s going to work, it’s important to have respect and be responsible.”

The reconciliation worked, obviously, and Careful is their tightest work yet, featuring some of the group’s most memorable hooks—see the bouncing synth melody on “Fate” that provides the backdrop to Matthews’s brooding ask of “Hey fate / What do you think you’re trying to prove?” However, that lovely air is punctured during the latter half of the track by Matthews’s shrieks, calling to mind the duo’s frequently visceral and involved live performances. Careful is cinematic, too—narrative, even—showcasing the duo’s ability to construct and deconstruct moods with predominantly instrumental tracks like “Keep Driving” and the title track, alongside dark pop bangers like “Crush” and “Face the Fire.”

Careful still has its moments of anguish, but the tension and anxiety shown on the record are in the pursuit of development; escape simply prolongs the inevitable. “We started to realize that you’re really just running from yourself,” Muller says. “No matter where you go, you’re still the same person.” Matthews, too, grows weary of constantly leaving—“I’m still celebrating escape because that’s my number one vice,” she admits, “but it’s so lackluster, or it’s not as fulfilling as it was.” Lucky for Boy Harsher, It turns out facing conflicts is just as strong a creative fuel as running from them.