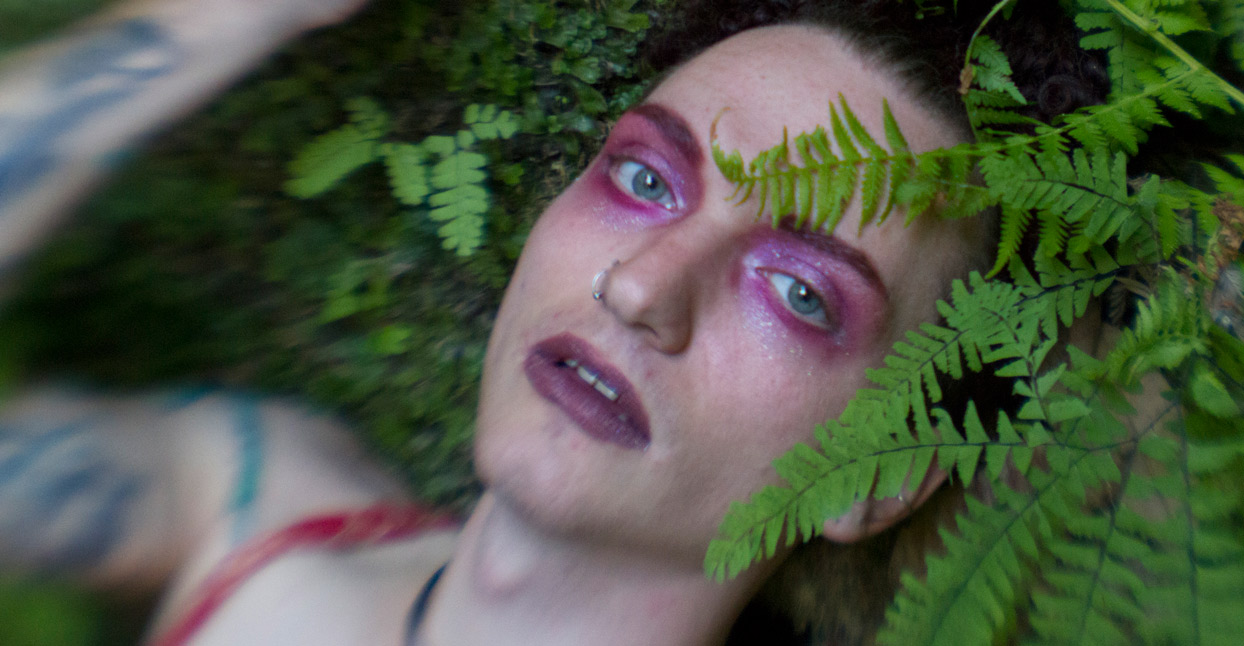 In 2012, around the time that James Ferraro and Daniel Lopatin were exploring what would later become known as vaporwave, there was Rare Nnudes, a collective and net label co-founded by producer and DJ Clifton Anthony, aka Bored Lord. Committed to “digital shamanism”—manifesting the physical and emotional space occupied by ephemeral social media like Tumblr, Facebook, and SoundCloud—Bored Lord played reticent, futurist music. Her early output was immersed in Web 2.0 symbolism.

For five years, Rare Nnudes was the locus of Bored Lord’s output. Collective mixtapes and one-off EPs hopscotching genre lines were commonplace, and live, Anthony hunched over a MIDI controller while stacks of enormous, dusty TVs with built-in VCRs streamed a glitched-out video feed of the event, before “stream” was a verb, or a Facebook feature.

Two years later, in a shack in an abandoned lot in her hometown of Memphis, Tennessee, Bored Lord went through a sort of genre metamorphosis and shed digital nativism for a Southern Gothic aesthetic. She performed her first vocal album, 2015’s Omens & Sigils, accompanied by a live band. “I used to only perform live while playing keys or having a backup band,” she says, “but just recently I decided to try singing with backup tracks and I love it. It’s just me and the music and the audience. It’s far more raw and minimal.” The show and album revealed the emotional core behind an artist whose output had been focused on the digital, with no physical releases, and signaled a departure from the post-internet aesthetic that dominated early Bored Lord releases. There was raw, emotional clarity in the lyrics, instead of euphoric escapism. The candid expressionism continues on Bored Lord’s latest release, Magik Made with Mental Illness.

Two and half years elapsed between Omens & Sigils and MMWMI, but Bored Lord has gone through a lot of changes in a relatively short time. “I just recently moved out to Oakland, CA. I came out as queer and trans after being in a pretty heteronormative relationship for a while,” she says. “I made a few EPs on Rare Nnudes and one EP on STYLSS. I made a lot of club music and started DJing more. I started doing remixes for Knightwerk. I joined Trash Cvlt. I had a few visual art showcases in France and Belgium. I produced for a lot of artists including Hippy Soul, London Jade, SHUG, and JayVeeThePrince. There’s probably way more I can’t think of.”

The Southern Gothic symbolism she explored on Omens & Sigils is preserved on MMWMI. References to practical magic and folklore, and forthright lyrics all define the new Bored Lord, as she addresses “IRL” space and explores herself in new musical environments. “For me personally, I view magic as the practice of intention through ritual, one that derives from heritage or culture. I inherited my ability and knowledge from my mother, who did so from her grandmother, who did so from the elder women in their life and so on,” she says. “The reason why I tied it to mental illness is because of how I’ve seen my mother and people who are open about their practices treated in the public eye. For that reason, I keep my rituals personal and only really discuss it with other people who have their own deep involvement. Plus, using it as a hobby has its waves of trendiness.”

The first six songs on MMWMI are introspective. On “Would It Be The Same,” Anthony becomes abruptly confrontational, facing the social pressures associated with coming out, singing “Would you talk shit or defend my name / Would it be for me or for personal gain?” “I am a very open person,” says Anthony on the enduring nakedness of her work. “It’s both my strength and weakness so naturally, if I’m saying words aloud, they are going to be honest to who I am and what I know.”

On how this openness connects Anthony to her audience, she notes, “The most common kind of messages I get are people saying that certain releases helped them get through hard times. I’ve heard some intense stories from people, friends and fans alike, which is weird because I don’t exactly write things that are intended to be relatable. It just proves that even when you feel the world is crushing down on you, you aren’t alone.”

On MMWMI, Anthony’s compositional aim was fluidity. “I spent far more time with each song this time around,” she says. “They all went through many drastic changes, some of them unrecognizable from their original form and others went through several versions only for me to go back to the first try. I wrote and rewrote lyrics and then would take [lyrics] out at the last minute. I’d record vocals over and over, only to keep a first take a few weeks later. It was far more organic than the focused vision of Omens & Sigils.” The few guests that make an appearance are longtime peers. “The album features  collaborations with other Rare Nnudes artists. Producer Qemist provided keys and vocals on ‘Caveman.’” Anthony says she is “99% sure the guitar sample is from a session with dinoDNA,” one half of the R&B project Magnolia.

Despite the empathetic connection that draws fans to Bored Lord’s emo electronica, she clarifies that this is not necessarily a redemptive quality. “I don’t wanna say it’s therapeutic, because that makes it seem like it helped me cope with the things I was going through. That’s not the case at all. The music’s more biographical than anything. And because of that I had to step away from it several times. I didn’t really anticipate it though. I almost didn’t put this project out. I almost quit music altogether while making it. I even released it early last year and deleted it.”

The result is wildly varied and exciting. This eclecticism is essential to Bored Lord’s identity. “I hate feeling like I can only express myself in one way. But the community surrounding underground electronic music spans all these forms, and I don’t think I need to separate them in order to be a valid artist. My true passion will always be writing these psuedo-pop songs. I’ve been doing it since before I can remember. But I’ve also just made strong relationships with people in the underground club and rap scene. Oddly enough, those spaces have always been more supportive of my material than anywhere else too. So the experimentation is far more organic than it might come across.”