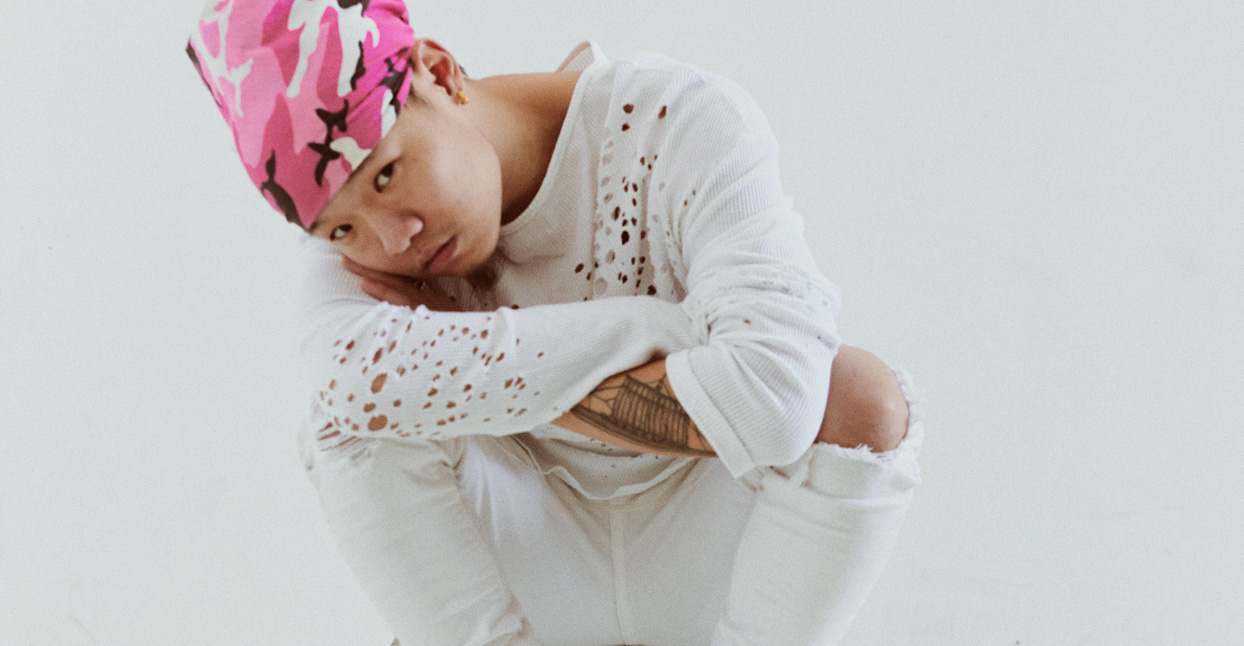 The living room in Bohan Phoenix’s Bushwick apartment, which he shares with a number of creatives including his longtime producer Zachary Levine-Caleb (better known as Jachary), features a piece of art that unites Chinese and American culture. It’s a friend’s drawing of the Chinese and American flags, split horizontally, with the colors of the stars switched: China’s five golden stars are replaced with white, and the 50 white stars on the American flag are colored in yellow. Indeed, the duality of Phoenix’s Chinese-American upbringing is the centerpiece of both his life and music. It’s a theme that appears throughout his new EP, Jala (加辣), where he interweaves English and Mandarin flows over Eastern-tinged instrumentals by Jachary, Howie Lee, and others.

Born Bohan Leng and raised in Hubei (湖北), Phoenix immigrated to America when he was 11 years old to live with his mother, who left her job working real estate in Shenzhen (深圳) for an assistant job in bioengineering in Newton, Massachusetts, in 2003. His stepfather, who is Swedish, eased him into his new environment by enrolling him in an ESL program at Bigelow Middle School, but he also wanted him to stay involved in activities that connected him to his homeland. “I was doing martial arts in Chinatown for six years, because my stepfather wanted me to have a community of my own,” Phoenix tells us on a snowy afternoon in February.

As a child, Phoenix honed his English watching Western television. He became infatuated with Eminem—the source of his love of hip-hop—after watching 8 Mile. He memorized the rapper’s catalogue up until Encore, imitating him word for word. He even dressed like him. “I was like [in] 7th grade with [a] do-rag. Shady Unlimited shirt. Very unaware, but very obsessed,” he says.

He later got into 2Pac’s work after hearing Eminem was a fan—so much so that later, in his LoveLove Studios downstairs, he pulls up his shirt to reveal a rework of ‘Pac’s AK-47 tattoo with “LoveLove” written over it. He’s also wearing a gold Death Row Records chain, which matches a gold earring his aunt gave him. Now 24, Phoenix’s music has moved from lyrically dense records to more experimental territory, adding both modern trap beats and Asian instruments for an international flair. His journey to full-fledged rapper is well-begun; he works amateur nights at the Apollo, and has released a steady stream of EPs online. But despite this success, his parents were initially skeptical of his decision to pursue music. “I never stopped doing it,” he says. “The more I kept persisting, [my mom] just realized, ‘Oh, maybe he’s so serious about this. There’s nothing I can do to change his mind.’ So let’s just be harmonious.”

Phoenix plans on moving back to China this June to be closer to his family. He’s ready to connect with his heritage again, this time as an adult, delving deeper into China’s musical history for inspiration. We spoke with him about embracing his ethnicity in his music, the making of Jala, and how he plans to be vocal during Donald Trump’s presidency.

Why do you embrace your ethnicity in your music? You’ve become the rapper who will rap in English and Mandarin and that’s very unique.

When I got to New York, it was very much about English rhymes for me. 2010, 2011, that was when J. Cole was bubbling hard. I was like, ‘Wow!’ The Warm Up. I had a song called “Rap With J. Cole or Die Tryin’.” I showed up to his first album signing with the shirt, Rap With J. Cole or Die Tryin’. I heard he did that with Hov. I still have a picture of me dapping him up, and he was looking at me [laughs]. I bet if I met him today, he will still recognize me, because I still have the same haircut.

So I got into him heavily. I start sounding like him. After coming into New York and realizing, ‘Wow, I’m going to be a small fish in a huge pond right now,’ that was so discouraging. He was the one at the time—even though I ended up sounding like him for a bit—he was the one that kept me interested and kept me going.

You took X Years off the internet because you felt it wasn’t the best representation of you. What made you comfortable to rap in Chinese?

It just made me feel like I was achieving something—whether I was getting paid or getting more recognition, I’m doing something that’s unique. I took a lot of pride in that, and I built off that. It was clicking with me. The more comfortable I felt about it, and the more I started thinking about this identity thing, the more I started accepting this other side of me without neglecting this Western side of me. It is also a part of my journey to today.

The more I tried to tap into the other side—the Chinese side—this last two years, I’ve been back to China like five times. I took the homies back there. I really wanted to show them where I was from. I thought this was the best way for them to understand who I am. They are hanging out with my grandfather, my cousins. I guess it wasn’t really one thing, except when I started to switch over, it felt right and I knew it was something that if I went for it, I could built off that.

You call your music “oriental trap” music. What is that?

[It’s] absolutely Asian, absolutely oriental. From Tibetan sounds to Japanese sounds to monastery sounds and Malaysia. Howie has a bunch of friends in all these countries in Asia; they just send him sounds they play. He doesn’t have to worry about sampling or nothing like that. He went to school in London after China, and he just really had an open mind because of the social environment, the closed-offness of China.

To me, he saw the future. Like, ‘Yo, I’ma mix this Asian and Western thing.’ And yeah, this whole oriental rap, this Asian trap shit, it’s just that same energy, that same rhythm. That’s the whole beauty of this hip-hop shit. It’s so accepting. I feel blessed having been accepted. People been rocking with it.

Was Jala made in China or here in the States?

Well, “3 Days in Chengdu” I already had since last June. The reason I put it on there is because it really resonated with a lot of people in China. It’s my favorite song. It’s the most meaningful song I’ve made to date. I guess the idea of having a project revolve around Chengdu and [my] hometown started around then. And then, meeting the Higher Brothers, hanging out with them. Two songs happened out there—“No Hook” and “Group Exercise.” For “Group Exercise,” me and Howie wrote the hook together in Taiwan. The rest was here. I met Drummy in Brooklyn; he’s a mutual friend of Tony G who shoots my videos.

I want to talk about “Eastside.” How did it come together?

It’s the only non-rap song on the tape. Before Eminem, it was Jay Chou. In 2002, when I first got a cassette tape to learn English prepping to come here, I was shopping around for music. He had this thing called The Eight Dimensions and it had a rap song on there called “Dragon Fist.” He had a music video with all cartoons flying around. In 2002 in China, that was the coolest thing I’d ever seen. He was like my most listened-to guy, and I’ve always liked singing. After gospel choir, and Zach putting me onto soul and D’Angelo, there’s no turning back anymore. You can rap, but in the back of your mind, you just want to be D’Angelo. That’s all you want to be. The coolest guy ever.

And so I was like, ‘Yo, I’m not that good of a singer.’ But I love the texture of the Auto-Tune, and I want to make a Chinese R&B song in this style, so that’s what I did. ‘Cause the whole Chinese pop R&B thing, it still got that old ballad-y feeling, that very traditional rhythm. It’s just a little cheesy. I think some people aren’t going to like it, but mixing this Chinese with this Western R&B thing is going to make someone else make some Chinese thing and make it dope.

As you maneuver through this rap industry, how will you address stereotypes of Asian rappers?

I’ma talk about it. I’ll start a conversation. I think starting a conversation is the best way, rather than directly putting someone down. I see a lot of issues surrounding what’s happening now is people putting each other down for supporting in different ways. I feel like Donald Trump literally brought out the worst in us. People who are not Trump supporters are putting people down because they didn’t go march or something. It’s really hypocritical. ‘Fuck Trump! But fuck you too, because you didn’t go march.’ Or, ‘You posted something on Facebook and that’s not doing anything!’ It’s like, ‘He posted on Facebook, he did do something. Someone who didn’t post on Facebook—or anything at all—actually didn’t do anything.

Have you thought about being political given what’s been going on with Trump’s recent immigration ban?

This is my response to this: Just like you, it’s an everyday thing for me. What’s the best way? For me, right now, my action is to treat every individual better than I can. Take it at an individual basis. My stepfather and my mom both voted for Trump. My mom doesn’t know better. She just did it because he did it, and they are companions. I don’t think my parents are bad people, I don’t think my mom is a terrible person because she voted for Trump. To me, it all goes back to treating each individual with [respect.]

So many times I want to just blurt out some political shit about Trump. But then I’m just like, ‘Is adding one more voice of hatred or displeasure gonna help?’ Or is it a slower thing than that? Is it more of having a conversation like this and making sure we both, [from] today on, treat everyone fairly? So I haven’t posted anything political about Trump or said anything in a song, but I might. It depends on how things unfold.

It seems a little crazy the past few weeks. This whole moving back to China thing, people think it’s aligned with that. The timelines just happened to align; I’m not really escaping back to China. You know, could I be in China and have my U.S. citizenship revoked? Then I don’t have Chinese citizenship or U.S. citizenship. So things like that scare me. Everyday, I’m in the same boat as you trying to figure out what’s the best way I can use my voice.