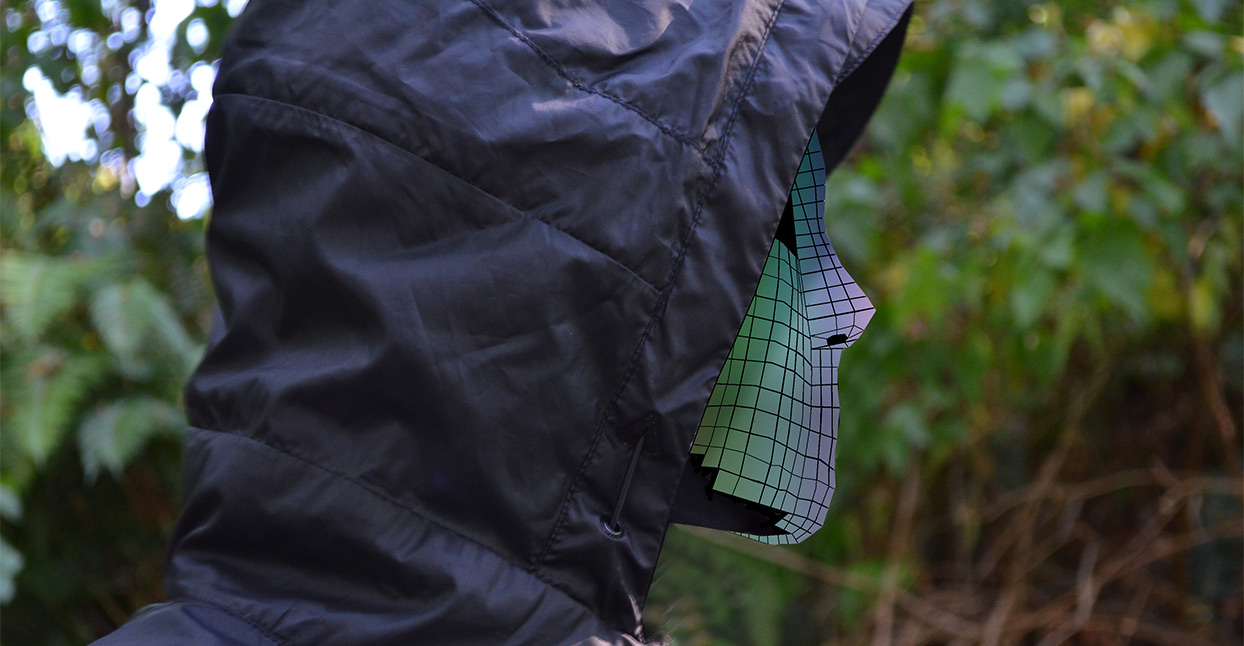 Blank Banshee knows how to keep his audience baited. It’s been three long years since his last record, and he’s spent the last several months issuing cryptic, email-based teasers for an album that was assumed by fans to be called Blank Banshee 2. (His previous albums were titled Blank Banshee 0 and Blank Banshee 1). When the album finally arrived last Monday it was called MEGA, but it’s clearly a product of the same creative vision as its predecessors. Its fragmented-yet-soulful vaportrap bridges the yawning chasm between itself and Blank Banshee 1, both a continuation of and an expansion on Blank Banshee’s signature sound. Yet even if its masterful balance of abstract ambience and danceable trap marks the pinnacle of Blank Banshee’s brand of vaporwave, the conditions surrounding its genesis still remain something of a mystery.

We jumped at the chance to interview the producer, who appears in public only when sporting his now distinctive glitter-ball mask. We asked him how he feels about the “vaporwave tag,” whether or not his music is influenced by video games. Somewhere in the midst of his answers, we caught a glimpse of the person behind that mask. We think.

As you may already be aware, there’s some debate and controversy online as to whether your music really is vaporwave. Is the question of belonging to a particular genre or scene something that concerns you when making music, or is it not especially on your radar?

I feel like it’s my job to make the music and other people’s job to decide what it is. It’s not really something I think about. Ultimately, whatever people want to call my music is cool with me. My job is to make it good. If it isn’t good, people aren’t gonna call it anything.

Your live show has earned considerable praise from your fans. Do you have any plans to tour behind MEGA?

I’m thankful for that, considering I’ve only done like 10 Blank Banshee shows. There’s no immediate plan to tour for MEGA but there will definitely be a tour in the future.

Your music often evokes the world of computers and video games: you’ve got a song called “Dreamcast,” and another, “My Machine,” that samples the “Intel Inside.” What exactly does this world mean to you personally and as an artist? To what extent does it inform your music?

I grew up with the internet. I had it in 1997 when I was like 10, so, inevitably it became part of my childhood. I’ve always thought the sounds of early technology were cool, and once I got into samplers, it was like taking the red pill. My mind just went straight to old phones and Windows 95.  And I’ve always been into video game music—long before any other kind of music mattered to me.  Composers like Uematsu, Mitsuda and Kondo, and others are major inspirations. Their job back in the day was to write music for virtual environments, like fields or ice caverns, sometimes based only on vague descriptions and using extremely limited technology. They all did it insanely well. I’m not sure how many producers approach music from that angle, but it definitely informs how I work.

The expectation surrounding MEGA (or Blank Banshee 2, as it was previously known) was probably the biggest it has ever been for any artist associated with vaporwave. Did you feel this expectation when working on MEGA, and did it put any pressure on your shoulders?

Not really. The only pressure was the pressure I put on myself to make a great album. I wanted to record live instruments and vocals and use samples in more creative ways, and it had to stay true to the Blank Banshee format.  I love making music, so it’s an enjoyable process. But obviously I set the bar as high as I could.  I care about making great art that stands the test of time. Blank Banshee fans are extremely smart, and would know right away if I released some half-assed shit.  I understand my music, and I know what makes it appealing.  I make sure I’m a fan of it too.

MEGA sounds a little harder than its predecessors, even a little more informed by techno in some places. Did you have any explicit musical influences when working on the record, or did it develop more as a natural evolution of your sound?

Compared to other music identified as vaporwave, your music often sounds considerably more intricate and complex. How long do you generally spend working on a piece, and what do you need to hear from it before you can say it’s finished?

Da Vinci was right: art is never finished, only abandoned. It can take a while to reach that point, honestly. MEGA took about a year and a half in total to complete once I really got into it.  “Cerulean” kind of came together all at once, but then there’s songs like “Gunshots,” which existed in 2010. That’s just kinda how things work.

Given that you go by an alias, and that you wear a mask during live performances, it’s hard to know who you are and what exactly your music might be ‘about,’ in a personal sense. So, without perhaps giving too much away, what is MEGA about?

MEGA has subjective meaning to me, but so does all music.  It generates unique imagery inside all of us.  So me telling people what I think MEGA is about will only impede their ability to figure out what it actually means to them. Which is what really matters. MEGA is your album—when you download it or stream it and listen to it and walk around with it, you’re in your world, not Blank Banshee’s. I’m just providing the soundtrack.

At a sensitive time in modern history, when countries are destroying themselves via civil war and human civilization is arguably destroying its own environment, vaporwave can sometimes be charged with seeming too detached from political reality. Would this be in any way a fair judgement on what you do as Blank Banshee, or does your music address political realities in less obvious ways?

Yes, it’s fair to say my music is detached from politics. But, obviously, I live in the real world, and things I see and hear can bleed into it. For example, the song “Web Ring” came together around the same time as this story last year about a Syrian kid who drowned and washed up on the Mediterranean while trying to immigrate to Canada with his family. It was obviously really tragic. But it’s not like the song is ‘about’ that, so much as it is an abstract of the emotion from those images. That’s as far as it’s ever gonna go.

The vaporwave community is extremely active on places like Reddit. Do you find the community helpful, or daunting? Do you read the message boards at all, and do you ever engage with fans?

The community is incredibly supportive. But it’s not really my place to be on Reddit trying to impose my own opinions about my music. I love my music, of course. I wouldn’t release it if I didn’t. But how I engage in that discussion is through the music itself.

Your music has recently been used in a variety of Simpsonwave tracks, with the use of “Teen Pregnancy” in “S U N D A Y S C H O O L” being the most notable. What do you make of Simpsonwave? Are you happy for your music to be used by the subgenre?

Yes. I fuck with Simpsonwave.

Would you be open to producing for other musicians? Is this something you’ve considered before, or even done already?

I enjoy the initial process of writing and creating music, but once that’s over, there’s a lot of monotony involved. So I haven’t produced for other artists, no. I don’t really think that’s my thing.

Finally, will we have to wait another three years until the next Blank Banshee release?