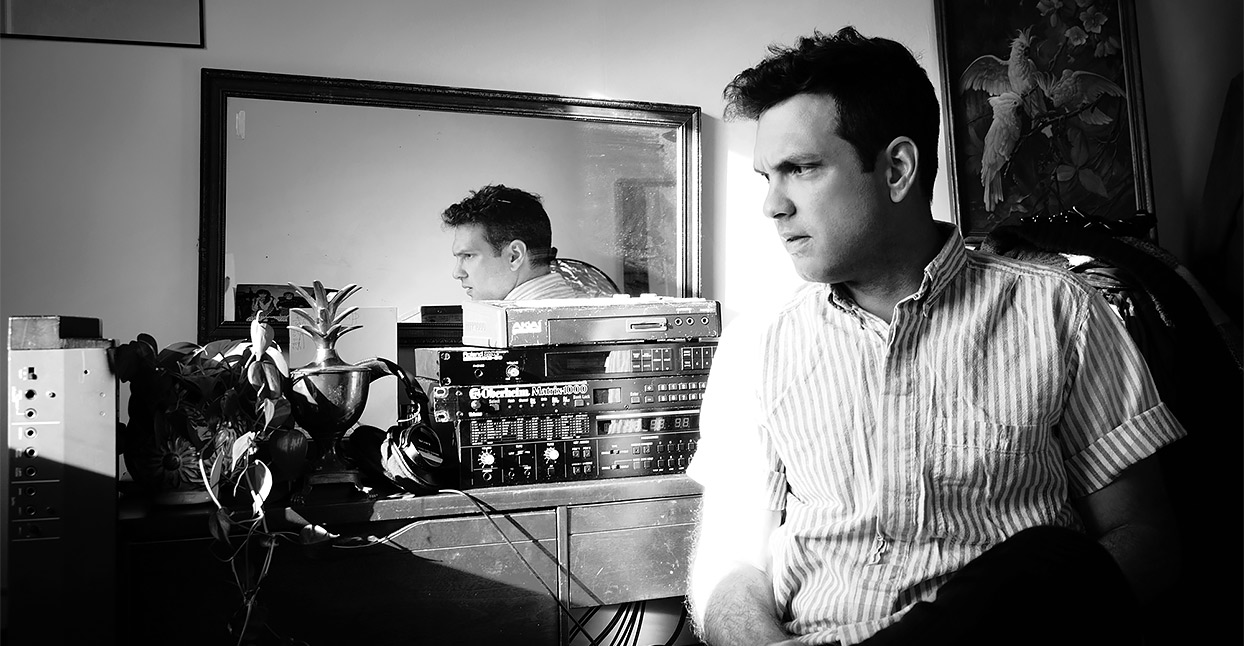 It doesn’t take much to get Chris Stewart’s right brain going. Just the other day, the Black Marble frontman was watching a documentary on Great Britain in the ’70s, and a segment on the Labour party somehow led to him mulling over the finer points of dog food.

“There was a political slogan at the time for the Tories: ‘Labour isn’t working’, meaning the Labour party is failing you,” he explains. “But it also hit me as ‘your hard work isn’t paying off’, and I thought of a few different images for that. One was a casting call for a pet food commercial; there’s just a big white room with a handler and trained animal just standing there.

He continues, “It’s a weird idea but it stayed with me for awhile. Like, the monotony of trying to get this animal to perform on cue in front of ad execs all day long, hoping to pay the rent and hoping that your pet doesn’t pee on something, or wig out in unfamiliar surroundings and bite someone. As if it’s not frustrating enough trying to rely on other humans.”

To bring things back to the creative process behind It’s Immaterial (Stewart’s first LP for Ghostly International), we asked Stewart, who is also a graphic designer and Black Marble’s de facto art director, to share six steps for creating a killer record cover.

Step One: Be Resourceful

When we were recording Weight Against the Door, I knew I wanted to shoot this ominous-looking building in Bryant Park in Manhattan. But the only camera I had was one of those Flip cameras from back in the day that took blurry pictures that looked like a cross between video and a lo-res JPEG.

My roommate at the time was a pro photographer, and had a Canon Mark III—which cost more than my car, probably. He must have been out of his mind that day, but for some reason he let me borrow it. The whole way there, I was just praying I didn’t drop it, or that someone wouldn’t rob me while I was shooting. It went fairly smoothly, considering I’m far from a real photographer. The image of that building framed with the trees to one side is still maybe my favorite image from any of my albums so far. I think my absolute terror with potentially ruining my roommate’s camera allowed me to focus better or something.

The front cover image for A Different Arrangement was a pattern I stumbled upon online after a few months of mulling titles over and looking at visual inspiration. My process is that I usually begin thinking of the image for an album cover and the name of the album about halfway into writing the songs. I usually have four or five things kicking around at any given time, and the winning combination usually hits me without being attached to any real predictable timeframe.

Anyway, right when that album dropped I got an email—and so did my label—from some guy who introduced himself as ’being notable from the Whitney Biennial’, insinuating that I stole his work, even though in my mind there wasn’t all that much similarity.

The funny thing was, I sent him the source file as proof of where I had purchased it from, but he still went on his blog the next day and played up the fact we ripped him off. Which was an interesting life lesson for me in human behavior if nothing else.

Step Three: Have a Lot of Spare Time

I usually do many versions of covers before I settle on one. With the latest record, I went through about 20 iterations with the current front cover in terms of just typographic treatments alone.

At one point, I scrapped the whole thing and just did a grey cover with some weird rune in the middle and wrote Black Marble with no title. I ultimately figured it would get called out as a King Crimson rip-off—which it basically was—so I went back to the photograph Logan White shot and stripped all the type and crazy stuff I had done away, and put it inside a thick black border with a simple serif font. No adornment at all, really, and that’s what wound up working best. The photo is so compelling on its own, I think.

Step Four: Always Get a Printed Proof of Your Work

Unless you really don’t care if the colors on your final album look anything like how you intended, you basically have to get a physical proof of the design—a printed copy that gets signed off on and sent to the printer. They then eyeball this and try and match the print run to your file. If you just get a screen proof, which some places prefer because it’s faster and easier for them, you should probably design everything in black and white or just resign yourself to never actually looking at your album cover in person. I’ve had to completely write off certain things because I just didn’t have control over how it was going to look, and I knew the person working on it didn’t care what it looked like. I will just never look at that particular item so I don’t ever have to get annoyed about it.

Step Five: It Gets Harder the More Albums You Make

The first record was the easiest to be happy with, because there was nothing else to compare it to. As you go along, you will probably feel some compulsion to match your later records to the first one thematically or stylistically, which can be limiting in a good way. I like a challenge anyway. I think the first three [Black Marble] records go well together as a visual system, but it’s funny; I’m starting to get boxed in by the elements I’ve used. Like, I already know the fourth record will have a thick white border as a reversal of the third one with black. I can see all four of them together, and nothing else I can think of so far will really tie them all together in that way.

Around the time an album is coming together, I’m always open to—or thinking about—art. Anything can strike me at any time, and I try to be open to that. I prefer to try and let a few different ideas hit me over time and pick from those, rather than have some high-minded concept going in and try to work on it till it’s right.

The hardest thing for me is gaining the perspective to know when something is good or not, so by just being open to ideas, you can react to a concept more as a viewer instead of a maker.  You can become the audience. I’m terrified of doing bad work and not knowing it, so I play these kinds of tricks to be able to see my work as an outsider.