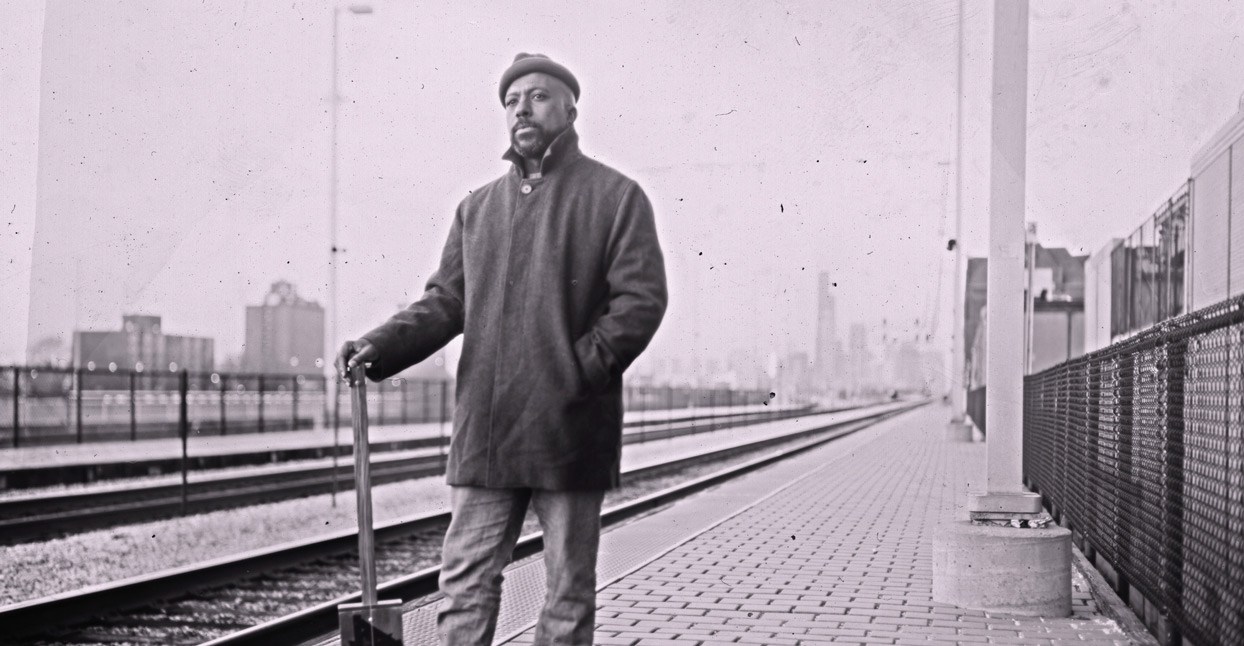 Ben LaMar Gay is about to release his debut solo album. It’s also an album of his greatest hits. Until this point, the Chicago-born composer had treated the process of making music as an exercise in improvement: Rather than making songs to be released, he made them to analyze and study. The ones he enjoyed were sent to family members, and Gay’s nieces and a nephew became his biggest fans. After seven “records” in seven years, International Anthem—the Chicago-based jazz-leaning label—in conjunction with Gay, has culled the greatest from these personal exercises and turned them into Downtown Castles Can Never Block The Sun, an album that remains surprisingly cohesive despite featuring material from over the course of nearly a decade.

“Every project came from the same desire to make a sound or tell a story,” Gay says. “That cohesiveness just makes sense. It’s from the same storyteller. The stories may be different, some characters may be different. When your mama is cooking, she does certain things, certain rituals in that presentation of food, you know it’s her.”

While Downtown Castles Can Never Block The Sun is all uniquely the work of Ben LaMar Gay, its 15 tracks branch out in all sorts of directions, touching a multitude of genres, styles, and sounds. It’s part Muscle Shoals swamp rock, part ‘60s free jazz, and part Brazilian bossa nova—the latter owing to Gay’s part-time residence in the South American country. Gay pivots between these genres with the fluidity of a seasoned veteran. Having been a young jazz player in the Chicago scene, Gay was an early collaborator with musicians like Jeff Parker, Joshua Abrams, Bitchin Bajas, and Jaimie Branch.

He’s no stranger to International Anthem, either. In 2017, Gay released the excellent Bottle Tree album with vocalist A.M. Frison. After watching his friends and collaborators find a support system within International Anthem’s world—and getting a taste of that life with Bottle Tree—Gay wanted to jump in on the fun with these meditations he’d been keeping close for so long. The process to Downtown Castles was a long one, and while his fellow players were signing record deals and releasing LPs, his path was furnished with a few more stops. Despite his success as a jazz cornet player, Gay wasn’t comfortable releasing his music. He was still finding his sound.

“There were attempts to just try to find my voice and just physically play,” Gay says. “I just had to learn how to produce a big sound, a solid sound. But with cats releasing stuff with International Anthem, it’s inspiring. Both sides are valid.” This is how one unreleased record became two, and two became three, and before he knew it, he was sitting with International Anthem label boss Scott McNiece, sorting through seven albums worth of material.

As it turns out, Gay’s process of recording music mainly for himself proved crucial to his growth as a musician. “It gets you to the truth of what you’re supposed to be about,” he says. “Not that I know yet, but documenting it and putting it into a bundle of sounds—it’s like binding a book. It’s me trying to get to a different thing as a human, instead of trying to be a great musician. Maybe I can use music to help me be a good father—if I want to eventually become a father.”

Downtown Castles Can Never Block The Sun is a reflection of the diverse and layered world he’s spent the past seven years immersing himself in. The song “Music for 18 Hairdressers: Braids & Fractals” is a play on Steve Reich’s Music for 18 Musicians and mirrors its use of repetition and pulse, looping fractured notes from stringed-percussion instruments with the occasional cornet burst. “Miss Nealie Burns” has the same ecstatic release provided by strummed balalaika as Jewish folk songs, and a subtle tambourine gently reminds the players of the pulse.

“Swim Swim” balances hypnotizing funk with Gay’s strongest singing performance on the record, a swaggering, growling reflection on relationships—backed by chanted vocals and the occasional scat singing. It’s perhaps the best encapsulation of the world Gay’s trying to conjure on Downtown Castles: untethered from any genre but still linked together by his incredibly unique approach to songwriting. This sort of precision and vision takes time.

“The reason why my sound is all over the place is that, man, when you realize who you are…that stuff to me is just Americana music, in the truest sense,” he says. “I was born on the South Side of Chicago. With the Internet and everything, I can only be that cat from the South Side, but all of those sounds we’re hearing, mixtures, and mutants of situations that produce this stuff, come from being unbound.”

Gay may be informed by the loose connections the Internet can provide, but his sound is as much a product of refining his skillset alone, quietly, and with minimal critique, response, and adoration. It’s a monk-like approach to music, and he’s now ready to talk: “I’m just excited for people to see what’s been happening over the past seven years.”