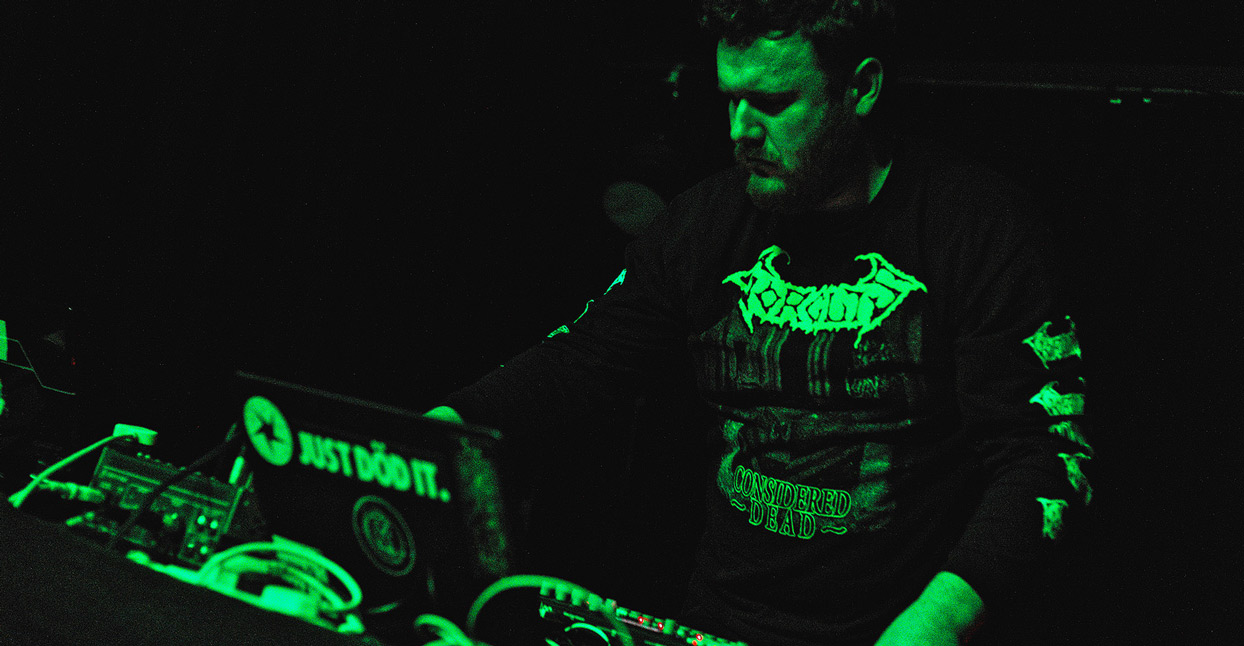 Whether making music as Basic House or running his label Opal Tapes, maverick producer Stephen Bishop has consistently charted his own path. A self-proclaimed fan of both dance music and pop, as well as the fringe stylings his own output favors, the U.K.-based Bishop has varied his approach over Basic House’s releases while retaining a semblance of techno and house music’s core foundation in traditional beats. Not so his latest full-length, I Could Tell You But Then You Would Have to Be Destroyed by Me, on which Bishop abandons rhythm almost entirely, in favor of creepy ambient spaces.

Fittingly enough, the album derives its title from artist Trevor Paglen’s 2007 book of the same name, a photo collection of patches from top-secret military “black ops.” But as bone-chilling as the new material gets, Bishop also sees the album as a commentary on underground music scenes and their codes. In the early days of Opal Tapes, for example, Bishop initially balked at selling digital versions of the label’s catalog, preferring instead to dub every single cassette by hand. These days, of course, he subscribes to a more pragmatic approach that offers the best of both worlds.

Case in point: The second Basic House album on Luke Younger (aka Helm)’s A L T E R imprint, I Could Tell You, is also available via Opal Tapes in an expanded NOYFB! box-set edition that features a bonus album, Puke Your Horizon, assembled from a blend of live performances and field recordings.

Bishop spoke with us about the new album and its intersection of themes.

Let’s start with your new album and the mood you were trying to evoke. The description on your Bandcamp page contains terms like ‘psychosis,’ ‘anxiety,’ and ‘paranoia.’

Well, I should say that I didn’t write that description myself. But it is a pretty dark listen. And the subject matter it reflects is terrifying on the surface, yet also organic and intrinsic to how societies function. So I guess the sense of paranoia is apparent in the underlying push-pull effect between knowing that there’s a necessity for a lot of these unknown technologies to be developed and experimented with, and then seeing them as terrifying black holes of money that could otherwise be used in more humanitarian ways.

There’s an introspective angle as well, because you’re relating top-secret black ops to the way we all operate on an individual level.

Absolutely. Trevor Paglen’s research is specifically about black operations, but the one thing that immediately drew me to his book—apart from the ostentatious title [laughs]—was the fact that it was about patch[-wearing] culture. Coming from an interest in heavy metal subcultures, where patch-wearing is really prevalent, this form of identifying or obfuscating oneself through a symbol is what I’m particularly interested in with this record.

These themes aren’t necessarily going to be apparent for listeners who aren’t aware of them. What types of clues did you leave in the actual music?

I’ve always been a fan of music or albums that have a buried narrative—even if it’s only visible to the person who’s made it, or to people who’ve had it explained to them. So be it. As a little boy, I was really obsessive about construction equipment—diggers, cranes, things that you would find on construction sites, whether it was playing with Legos or in real life. If there was construction going on locally, I used to go and watch that stuff, even when I was like three or four. And I guess the sounds were a really big part of that, too.

The title of the track ‘Procul Este Profani’ translates roughly as ‘Beware those who go beyond here.’ It begins with these naïve statements by these young men—boys—who are talking about why they want to grow up. That track, perhaps antithetically to the way that most first tracks on albums work, then immediately plunges into something that’s essentially kind of boring. It’s like a plodding procession of deep drums against a pretty atonal backdrop. That plodding line of drums represents the drudge of life before you’re kind of driven insane by the process. And then, at the end of the track, there’s an older man who speaks about where he’s ended up [laughs]. That’s me trying to draw a line between this sense of naïveté and facing reality. That sense is there in the way I’ve chosen to make music and have a career. It isn’t an insanely hard job, but it’s not a very easy job, and it’s certainly not a very well-paid job. But there’s an arc to the way that line develops over the course of the record.

Can you talk about your background in metal and hardcore?

I’ve always been interested in sound, particularly atonal sound. But I was only able to understand and categorize that when I was quite a lot older and had read and listened a lot more. In the midst of that progression, there was a lot of metal. But it wasn’t specifically because it was metal—it was more about just looking for sonic extremes. In metal, music gets faster and deeper, and you have these obvious jumping-off points. For me, a real jumping-off point came when I started to hear the extremity that I was looking for, but within quiet music and music with great space like Keith Rowe, [British improvisation group] AMM, Japanese electronics like the Onkyo scene, and the use and abuse of really simple equipment to make these very intense headspaces.

That form of improvisation—using a low-input mixer and simple feedback machines—is the basis I built on for tracks on the album like ‘Janet Terminal Blue’ and ‘Pixys,’ only I was using my skills at composing with the computer to help me on the way to making this story a bit more broad. All of the track titles on the record specifically relate to North American black operations, but I just see those as the most widely written about, at least to my knowledge given my limited research.

So you’re making a parallel between Paglen’s subjects and your own life path, like your choice to run Opal Tapes as your mode of subsistence. It sounds like that’s reflected in the music as well.

It is. And then there’s the learning about how these things work. I mean, I’m proudly independent as a label, yet I’m still not truly independent [laughs]. You’re always attached to the lines of output, be they distributors, customers, what have you. You’re always part of this larger mesh, and it’s never really just a direct artistic output. It has to be supported by these infrastructures.

On that note: One of the things that’s interesting about the Opal Tapes story is that initially, you only wanted to issue cassettes. You were hesitant to release music digitally, but you found that the following you’d built up—people who were attracted to the design aesthetic of the physical product—were willing to spend £5 on a digital download, so you relented.

Yeah. I suppose it’s strange to think back, because I don’t even consider the two all that separately anymore. I’ve always been someone who’s bought—and stolen—digital music throughout my life [laughs]. For a lot of people, that is the product. That’s exactly what they want, for it to exist on an account on Bandcamp or a similar platform, and they want to be able to access it in high quality, etc. I’m not very old, but I’m also not that young [laughs], and people are just digesting music in ways which I never thought they would, or with as much hunger. People are very willing to spend money these days on weightless products. That’s a good thing that we’re facing now because, hell, it’s certainly keeping the underground music scenes—or whatever it is that Opal Tapes is considered to be a part of—alive.

That said, one of the things that I think surprised everyone is that there are listeners out there now who take a hybrid approach—they want the cassette and the digital. I wonder if there isn’t a growing number of people for whom having just the digital isn’t enough; they need some sort of analog to it.

The press release for the album draws connections between ‘occult knowledge,’ black operations, and musical subcultures. When you stop and think about it, underground music scenes—the people who probably make up your audience—tend to operate like secret societies and foster an ‘occult’ vibe. They have a shared language, use symbology, and view themselves as being heretical to the mainstream.

Yeah, there’s a shared vernacular to a lot of this, and a common use of certain design traits that can kind of hook people. For me, rather than reflect so much on that, I was thinking more of the importance of this book and what it triggers, which is that we may think that we’re part of these occult circles but, of course, the moment you’re Google search-optimized and, in the case of Mr. Paglen, you’re selling on large online retailers, you’re very far from that. You’re a commercial entity. So this whole thing of wearing the patch or selling the record through these highly self-optimized avenues is contrary to anything which would be considered occult or esoteric. And that’s maybe what the shared vernacular truly is: a shared confusion over believing that you’re doing something under the radar when it’s all extremely overground. As dark or weird or, yeah, occult as you think these things might be, they’re just sitting on a server somewhere.