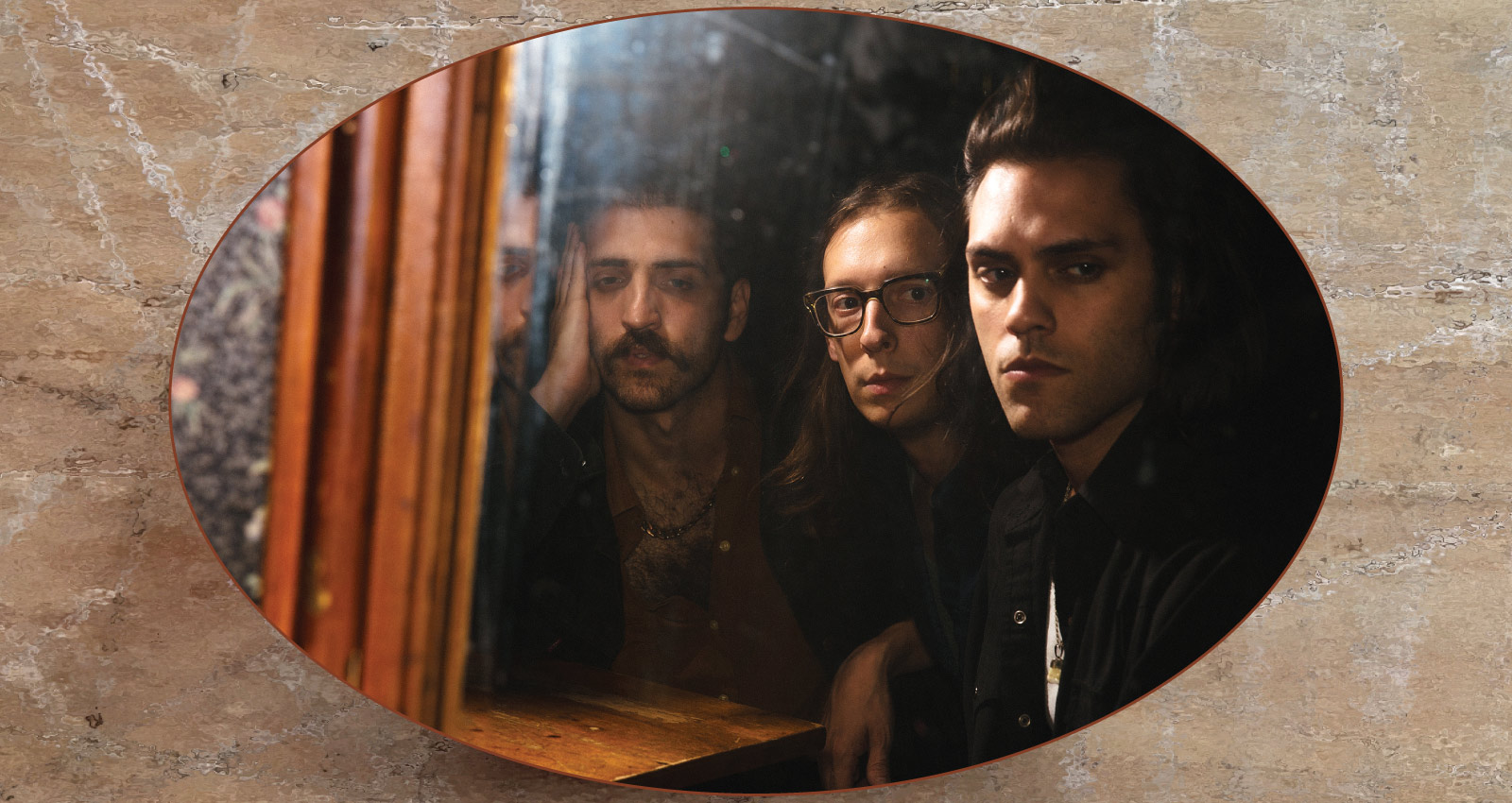 Stray, the bleak and gripping new record from the Brooklyn group Bambara, is populated by a cast of lost, desperate characters. The first one we meet is a dancer named Miracle. In the album’s first song, Miracle is prepping in the dressing room of a Southern nightclub called The Cheetah, straightening her blonde wig before taking the stage. She leans in close to a mirror to inspect her lower-lip tattoo, which reads: “Meanness.”

Miracle is the daughter of chemically sterilized parents—her origin story is also the source of her name—and before Stray is over, we’ll have spiraled backwards in time to learn about them, how they were named Ben and Lily, and met in an insane asylum. We’ll also learn about how Death—a humanlike figure who hates lightning bugs and loves sugary cocktails—eventually caught up with Ben, Lily, and Miracle, just like he did with Crystal and Cole and Claire, and all of the other loosely connected characters who inhabit the album’s 10 songs. Not so much a concept album as an anthology, Stray employs a deliberately chaotic narrative structure, introducing you to different characters and incidents at sporadic intervals, and then requiring you to do the work of figuring out how all of them connect to each other. To wit: On the album’s third track, we learn that a character has been murdered; we don’t actually meet that character until track ten.

“I wanted the album to be like a collection of short stories that were all connected, but each one had its own arc,” explains Bambara frontman Reid Bateh over beers at the neon-heavy Brooklyn bar, Mood Ring. “I loved how the last album turned out, but on a song-by-song basis, you couldn’t just dive into it—[for each song], you’d have to rely heavily on the song that came before it. With this one, I wanted it to be like: You can just listen to any of the songs, however you want. And if you wanted to connect them to each other, well, it’s there for you to dive in.”

“The last album” was Shadow on Everything, Bambara’s fourth, and the first in their catalogue where Reid’s gift for narrative songwriting felt like it started to snap into focus. That album told a more linear story, one about love and murder in a small Southern town. What Reid is after on Stray is arguably more challenging and, ultimately, more rewarding: To write a collection of interlocking short stories, shuffle the pages, set them to fierce, hellbound, Birthday Party/Teenage Jesus riffs, and let the listener do the rest. “I’ve always been drawn towards narrative, and I used to fight it,” Reid says. “And then finally I was like, ‘You know what? I just want to write a record as a story. I want there to be a narrative arc, and I want there to be characters that come and go.’”

Stray is the culmination of a journey that began with 2016’s Swarm, which was the the first time Reid experimented with narrative. Before that, the group—rounded out by Reid’s brother Blaze on drums and lifelong friend William Brookshire on bass—flailed gamely in a kind of noisy experimentalism that never really suited them. In concert, the group would furiously multitask, trying to set off a series of noise samples and pre-set triggers that made the live show feel, as Reid puts it, “like watching someone work on a car.” An accidental epiphany came during a 2017 show opening for Girl Band during which Reid—who used to handle both guitar and vocal duties on stage—broke his hand beating on the back of his instrument. The injury forced the group to recruit a live guitarist and relegated Reid solely to the role of frontman. It turned out to be a blessing in disguise: Reid is almost supernaturally suited to the part, stalking the stage with the fury of a Southern preacher, bellowing tales of doomed characters in a severe baritone, and punctuating the ends of phrases with great sweeping gestures. There’s a kind of powder-keg combustibility to his live presence; watching him onstage in the full throes of his worked-up Pentecostal fervor feels like how it must have felt to see Jerry Lee Lewis in the ‘50s. To put it another way: Bambara have gone from being a group of proficient auto mechanics to one of New York City’s best live rock and roll bands.

All of that fire, brimstone, and bleak sexuality is filtered directly into Stray, where Blaze’s blistering, avalanche-style drumming and Brookshire’s sinewy, menacing basslines provide the kind of ballast and musical brutality that beautifully complement the darkness in Reid’s lyrics. Songs like “Sweat” whip and thrash, with clawlike guitars dragging jagged lines over low, groaning bass. As on Shadow, the songs on Stray gain added power from a lineup of auxiliary players: a bleary horn section adds a queasy, juke-joint greasiness to songs like “Miracle,” and the backing vocals of Palberta’s Anina Ivry-Block and Drew Citron of Beverly serve as a kind of ghostly Greek Chorus, punctuating key moments with eerily sung asides.

Much of Stray is loosely adapted from stories Reid heard from his family while growing up in Georgia. Miracle’s chemically sterilized parents Ben and Lily, for example, are based on friends of Reid and Blaze’s father. “My dad grew up in Georgia, and his summer job was working on an assembly line,” Reid says. “And one of the guys he worked with every day was a dude named Ben, who had been chemically sterilized because he was a wild motherfucker. They used to do stuff like that in the South back then.” Just like the characters on Stray, the real Ben was eventually committed to the Milledgeville Asylum, where he met his wife. “She was also chemically sterilized, because they thought she was ‘slow.’” Reid says, shaking his head. “So, yeah, Milledgeville Asylum is a real place.” Reid heard countless stories like this growing up: About how his grandfather, who had moved from one small town in Georgia to another, found himself living next to a local crime family, and marched into the local police station demanding to be deputized. (They happily acquiesced, even giving him a gun. The crime family showed their appreciation by burning down Reid’s grandfather’s house.) He also has a few stories of his own: When he was still living in Georgia as a teenager, one of Reid’s friends died of an opioid overdose. A few nights later, that friend appeared to him in a dream—an experience that shaped the subject matter for the turbulent song “Sweat.”

Stories like these are the reason why every article about Bambara—and now, this one too—inevitably includes the phrase “Southern Gothic.” And while Reid is quick to acknowledge the influence of writers like Flannery O’Connor (“When I was in high school I read A Good Man Is Hard To Find, and it just blew my fucking mind”) the commonalities have less to do with character types and setting as they do the philosophy that runs beneath them. “I do think, at the core of most people, is a desire for destruction,” he says. ”Whether that’s burning things down, or committing violence against other people, I think everyone probably has an equal urge toward violence as they do toward good.” Indeed, the sole connective tissue between all of the stories on Stray is humankind’s baseline propensity toward violence—even more so when their circumstances become desperate. Cole’s wife Claire drowns their baby in a bathtub; Serafina escapes the asylum and sets fires all over town; a stranger pulls a gun on Starr Street for no reason and shoots everyone in sight. The message of Stray, if it has one, echoes the words of John Hobbes: that life is nasty, brutish, and short, and that the number of people you can actually trust can be counted on the fingers of one hand.

Given that, it’s little surprise that the character who appears most frequently on Stray is Death. The first time we meet him, he’s barreling down the highway in a copper Pinto amidst the roaring Satanic surf of “Heat Lightning.” He keeps turning up throughout the record to strike every other character down, taking something of theirs with him each time as a memento of the kill. His frequent appearances snuff out the characters’ attempts to better themselves. When we meet Miracle at the start of the album, she’s trying to save money for a better life. When Death turns up four songs later holding her blonde wig, we know that her plan failed. Cole survives the death of his first girlfriend, falls in love with Claire and has a baby, but still ends up murdered in “Sing Me to the Street.” Part of what makes their deaths so affecting is the vivid way Reid writes their lives—divorced from the context of the songs, his lyrics could pass for excerpts from a novella: “Crystal was younger than me, but much tougher, with a dark smile on her lips”; “She smokes out her window, watching the sunset behind the figures of bending trees”; “KC said, ‘Son, no Savior will return. See what happened to Irene after years in the church? Ain’t no Good Book going to keep the maggots away from their lunch.”

As that last line clearly indicates, Stray doesn’t exactly conclude on a note of optimism. “I’m not super big on hope,” Reid laughs. “I mean, I think it’s almost like faith, or religion, or something. It’s one of those things that sedates you. I know it’s one of the saving graces of human beings, but I’m not super big on it. Individual people make me happy, and I have optimism about people—not as a whole, but individuals. And there are people that I care about and they make me happy. But hope in general is not a big thing for me. If anything, I try to squash it as much as possible.”