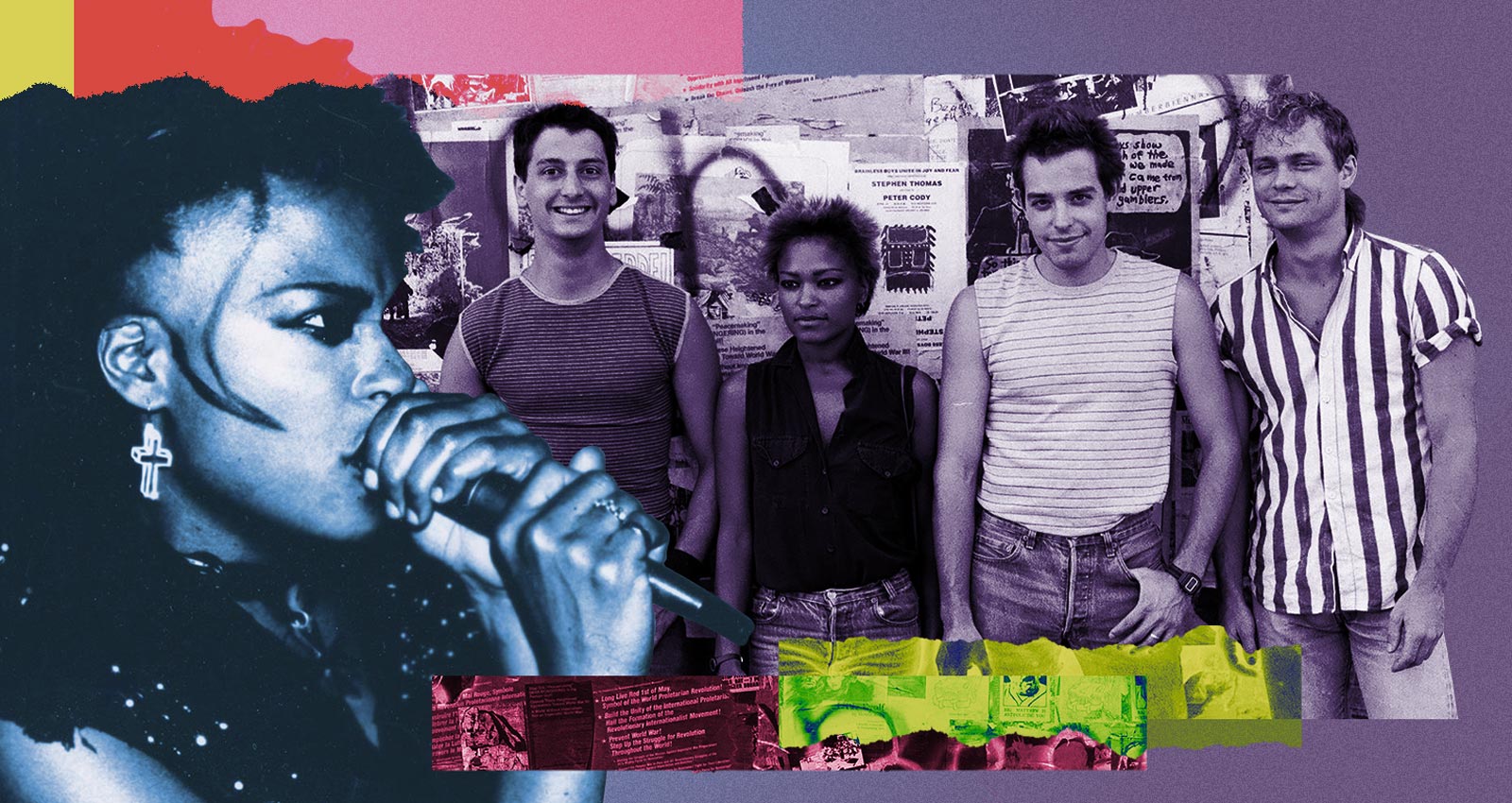 Photos by Christina King and David Ledgerwood, collage by Bandcamp

Last fall, the internet blew the lid off the story of Tina Bell, a Seattle rock singer whose post-punk, proto-grunge band Bam Bam predated the likes of Nirvana, Pearl Jam, and Alice in Chains. Until recently, few knew of the group that the singer fronted from 1983 to 1990. With a retrospective release coming out early next year, Bam Bam has narrowly escaped disappearing into a black hole of rock ‘n’ roll memory.

The persistence of the band’s bassist, Scotty “Buttocks” Legerwood, in preserving artifacts from the group’s existence has been vital—and, at times, heroic. After more than a decade in safe storage, Bam Bam’s unreleased demo tapes survived not only obscurity, but also opposing elements in two different incidents—first, a flood, by inches, which caused the band members to move the early demos to a presumably safer location… which caught fire. Despite orders from a firefighter on the scene, Legerwood braved the smoke and entered the burning home to save the tapes, risking his life and incurring serious injuries. Had Legerwood obeyed, the group’s videos, first photoshoot, and early studio recordings would have perished alongside those demos.

In February of next year, the Villains (Also Wear White) EP will be released by Bric-a-Brac Records, the very first release from the Chicago record store’s in-house label. It includes songs from Bam Bam’s 1984 7-inch of the same name, and the album art nods to the original design and graphics. Three previously-released songs—“Villains,” “Heinz 57,” and “Stress,” engineered by Chris Hanzsek at Reciprocal Studios—are paired with three never-before-released demo tracks (“Swing Set,” “Going to a Party,” and “It Stinks”) that the band self-recorded at the home studio shared by Bell and guitarist Tommy Martin. Seattle legend Jack Endino mastered everything, bringing it all together.

On the title track, a distorted chord rings out, surrounded by growling feedback. A spaced-out snare hits, and the guitar chugs out a hypnotic three-note riff. A chaotic scream tears through the song’s center, and the pieces suddenly unite in a blitz of screaming guitars, stormy rhythms, and cutthroat lyrics (“Bad guys wear black/ Show another side”). Gang vocals give extra power to the chorus chant: “Villains also wear white.” “’Villains’ is about sexual abuse and rape,” Legewood says. “It was already in work when we were watching a late-night cowboy movie in which the bad guy was the town sheriff. Tina chuckled and said ‘I guess villains also wear white.’”

“Going to a Party” leads with an ambling rhythm and a group of stoned guys singing, “Going to a party/ Going to a party/ Gonna have fun” before the song doubles in speed and Bell screams: “You don’t like to go to parties/ You don’t like to have fun/ You never got down!” and later, “You don’t know how to dance/ You don’t know how to be cool/ You aren’t so slick/ Fuck you!” Bric-a-Brac co-owner Nick Mayor says, “It paints a picture in my mind of the typical dismissive party dudes getting in Tina’s way, and then her unleashing frustration and anger upon them.”

This mental image would be in character for the singer. Bell wasn’t afraid to speak up; when an audience member spouted racist comments toward her, she used her microphone to hit back, and wrote at least one song about the racism she experienced growing up. “‘Heinz 57′ [is one] of the few times Tina addressed racism,” Legerwood says. “Mouth breather kids at school taunted her with the nickname ‘Heinz 57,’ because she was of mixed race. She basically reclaims the name and tells them to fuck off with a bit borrowed from Shakespeare’s Tempest.”

But with friends, Bell’s demeanor was easy-going. Both Bam Bam drummers, Matt Cameron and Tom Hendrickson, recall her kindness. Says Cameron, “I remember Tina being very warm and welcoming when I first met her. She gave big hugs and had a huge infectious smile.” Hendrickson emphasizes her warmth, as well as her talent. “Tina was welcoming and super nice from the get-go,” he says. “She could have been a model ‘prima donna’ type, but she just wasn’t. She was down to earth. She never put on airs toward fellow musicians. I always really appreciated that. It always made me feel like I could play how I wanted to play.”

He adds that it was a shame, “that [Bell] didn’t get the attention and recognition she deserved. She never got her just due. She was essentially ignored. It was really unfair.”

In an interview with KEXP’s podcast Sound & Vision, Cameron said, “I’ve played in tons of bands, but then when I would meet these people in Seattle that were these unicorn people.” He goes on to name Bell alongside Chris Cornell, Kurt Cobain, Mark Lanegan, Eddie Vedder, and Layne Staley. “I think Tina is part of that generation that I came up with that had some of the best rock lead singers ever.”

Legerwood suggests that, as an artist, Tina would have wanted to be appreciated for her work over her identity or her place in history. He says, “Tina knew the three of us—her, Tommy [Martin], and I—had worked together as a team creating Bam Bam’s sound in the beginning, and I don’t think she’d appreciate the assertion that she or Bam Bam single-handedly ‘created grunge.’ Tina just wanted to rock and would’ve wanted to be remembered as just that: a brilliant musician of the purest rocker spirit!”

Of course, a host of circumstances impacted the band’s trajectory and legacy. But ultimately, considering the pervasive white, male-centric narrative of punk, hardcore, and grunge, the revelation of a Black woman fronting a sludge-metal band in the early-to-mid-’80s before “grunge” was even a term used to describe music, is mind-altering. This was half a decade before Nirvana laid down the first tracks for Bleach, and a year before Green River recorded “Come on Down” in the same studio with the same producer. In the mid-’80s, the Melvins opened for Bam Bam, and Kurt Cobain lugged their gear.

For many music fans and musicians who are women and/or of color, Tina Bell’s identity matters. Much has been written about the way women in grunge were covered by the press. Black musicians have historically been stripped of their rightful credit and sphere of influence in numerous music genres. When it comes to grunge, Black musicians are not just located on the periphery, they’re often not even covered—and not because they didn’t exist.

Bric-a-Brac co-owner Jen Lemasters says, “Being [a WOC], I have really come to find solace in representation. I know it doesn’t mean everything, but I have enjoyed being able to find women paving the way, which is why Bam Bam is so important to me.”

In 2020, Lemasters created an Instagram account showcasing records in her collection that feature women in early punk and adjacent genres. She is specifically interested in unearthing records of unknown bands with members who are women of color. She explains, “So much history generally has been whitewashed. It has become a hobby of mine to dig and look through punk and post-punk music looking for BIPOC women, people who may have been overlooked because rock ‘n’ roll wasn’t ready to be more inclusive. To this day, so many people in documentaries comment on how inclusive the punk scene was, but at the end of the day, we are still listening to Henry Rollins and Dave Grohl talk about the Ramones and Fugazi.”

Since the group recorded very little during their time together, the evidence that does exist is important. Both Bell and Martin have since passed, so neither lived to see the day that their almost-forgotten project get a second life. “It’s kinda like finishing an incomplete chapter of our collective musical lives. It’s been a long fight trying to secure Tina Bell and Bam Bam’s legacy, and this is one more step toward that goal,” Legerwood says.

Lemasters says, “People need to hear Bam Bam so they can challenge the way they think about rock music. The more exposure to the history of BIPOC people and women in rock as well as every other aspect of life will hopefully get the world to the conclusion of inclusion, acceptance, and embracement of diversity.” She concludes, “I am very excited to be a part of that and help get her music and story known.”