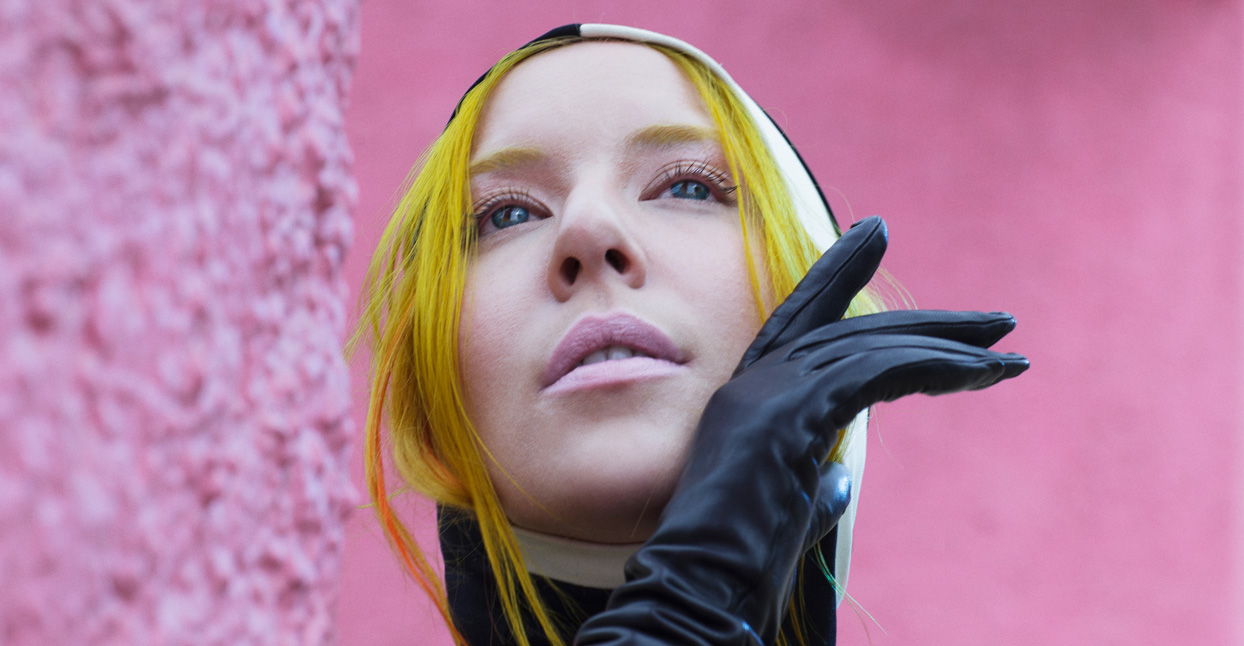 “People have always been good at imagining the end of the world,” wrote environmental activist Rebecca Solnit. “Which is much easier to picture than the strange sidelong paths of change in a world without end.” It makes sense that Austra’s Katie Stelmanis chose this quote to frame her third full-length, Future Politics; like Solnit, Stelmanis has a lot on her mind, and her music has deeper layers beyond its synth hooks and propulsive beats. Stelmanis is openly gay, and she wants Austra’s music to be a safe haven for the LGBTQ community and a vessel for Stelmanis’ progressive thinking. Future Politics plays like the party before the apocalypse, but Stelmanis isn’t going down without a fight. Its dancefloor-ready electropop belies an urgent wake-up call to the world, and an optimistic belief that social change is still possible.

Stelmanis is a striking visual artist as well (check out the hauntingly beautiful video for album single “Utopia”), and Future Politics is a glam package of hope in a time of darkness and uncertainty.

You quote activist Rebecca Solnit on change coming from writers, artists and the marginalized. How do you feel we are doing in that regard?

I feel that people are starting to wake up. As many international onlookers have commented on the Trump phenomenon, they’re saying America has been exposed. I think to a degree that’s definitely true. I think it’s America being exposed to actual Americans. Growing up in the ‘80s and ‘90s while living a relatively comfortable life, I think the millennial generation is deemed apathetic, but I think we’re starting to figure out how truly messed up things are. This election is the icing on the cake. It’s a huge shock and a wake-up call to our generation.

How did the current political climate impact Future Politics?

With the album, I was going beyond the idea of politics in general. I’ve believed for a very long time that the political system is so broken and utterly incapable of addressing the issues most of us feel are important. Trump just confirmed that. I wouldn’t have changed the thesis of the album, and I feel it’s more pertinent now than before. The album was inspired by the destruction of neo-liberalism, which is the destruction of Hillary Clinton. It’s something that’s so normalized that politicians are incapable of seeing beyond it. We have politics that are seemingly progressive, but without anyone who knows how to govern. That said, I wasn’t anticipating the rise of evil fascism while I was writing the album.

In this election cycle, there was talk that any art that wasn’t overtly political was inconsequential. Are you dealing with that at all?

I don’t think any art is inconsequential. I feel the exact opposite. I think art is more important than it has ever been. Maybe not ever, but it’s definitely more important than it was a year ago. I get it, though. I was talking to the director of one of my videos, and she said that it didn’t feel right to put out anything at the moment that didn’t have some kind of political undertone or message. It feels really hard to put out something that isn’t a comment on the situation.

Do you become artistically or personally empowered when faced with hate and sexism?

I think when I’m faced with hate, I get this attitude of ‘I don’t give a shit.’ There’s a nicer way to say that, but it’s almost like all inhibitions are lost when someone’s hating on you. I’m suddenly not afraid to say or do anything, and I think that’s a good place to be artistically. It’s not like I feel unsafe, but it’s more a response to annoyance or someone saying something I thought was misogynistic. It definitely would be different if I was in a position of fearing for my life. It makes you want to work harder.

As an openly gay woman, have you become fearful for your safety?

I don’t have any fear for my safety because I grew up in Toronto, which is a super liberal city. I travel in liberal circles. I’m white, which is very beneficial to me. It’s very rare that I have feared for my safety, but it’s obvious there are many people that don’t have the same luxuries as me. They don’t live in a big city or are a person of color. I’m also pretty straight looking. I don’t look queer, but for people who are more visibly queer or trans, life can be a lot more difficult for them.

What was going on with you personally when you started writing Future Politics?

I started writing three years ago and had just come off five years of touring. I moved to Montreal but wanted to live kind of far out, so I ended up totally isolating myself. I was living by myself. It was freezing, dark and there were definitely some intense feelings of loneliness and sadness. It was a very important reset as I needed to remember how to be alone. I tried to not look at the internet and taught myself how to unplug. It put my brain in a whole new, relaxed state. I actually hadn’t read a book since high school and I felt like I was getting stupid, so I started reading militantly. One of the books I read was Naomi Klein’s This Changes Everything. She ties the environment to capitalism, and that’s what led me down the path of feeling this collective sadness. The Great Barrier Reef is gonna be dead in 20 years. I think people feel really deep, personal sadness about these issues, but there’s not really an outlet to express that sadness. People write songs about breaking up and breaking hearts, but I feel that this sadness is just as intense. A lot of the songs on the record are about dealing with those emotions. How do you even comprehend that the world is dying?

Was it swirling confusion about your sexuality early on?

I was a weirdo in high school. I personally wouldn’t have thought of myself as a nerd, but years later I ran into someone from high school who said, ‘You were such a nerd in high school!’ I was the classic freak/geek. I didn’t even really think about dating people. I’m not the kind of gay that just likes all girls. I only like lesbians. I didn’t realize I was a lesbian until I met my first lesbian. My gender is just more feminine, as I don’t really look like a lesbian. In the queer community, there’s a wider spectrum of how people feel comfortable presenting themselves. I’m more comfortable presenting myself as feminine, which happens to be in line with my gender. Lots of gay women would rather die than put on a dress because they’re in a different place on the gender scale. It’s not really a choice, but just how I’ve always felt most comfortable.

Was there a concrete moment when you knew you were gay?

My mom knew before I did. I don’t know how she knew, but I didn’t like to communicate with my mom. She just knew, so I never really had to come out. Suddenly I had a girlfriend and brought her over. My mom was like, ‘I was right!’

Is there an artist whose path you’d like to follow, in the sense that they’ve made all the right moves?

I can’t relate to any artist that exists. In terms of career trajectory, there’s definitely artists who’ve had awesome careers that I’d like to have. It’s hard to see myself fitting into any role. That has always been a struggle for me, because I don’t know exactly where I fit into the music industry. I don’t see the person I should be following or whose career I should be emulating. I just feel different, and not in the sense that my music is so original.

As you create, do the lyrics or soundscapes come first?

In the past, the lyrics always came last. This record was much more a holistic process. There’s more intention behind this record than past records. I was writing the lyrics as the music was coming together. They both informed each other, along with the visual aesthetic. Everything grew together on this record.

Would you feel dirty putting out a pure pop record?

I don’t think I’d feel dirty, and maybe five years ago I would have said, ‘Yes.’ At this point, I think it would just be fun to make a pop record. Good pop is just amazing music. Michael Jackson made pop music, but there’s a lot of shitty pop that gets heavily marketed and gives it a bad rap. I think that if you can make good pop, that’s the hardest and most amazing thing you can do.

When art, communication and peaceful activism fail, what do you think are the next moves?

I think that art is becoming subversive again. The hippie, peace and love movement was subversive. The idea of free love and breaking out of these conservative, Christian barriers was subversive at the time, but those ideals filtered into the mainstream and shaped the way we govern ourselves. I think now it’s our job, as the creatives, to remake those subversive messages. I believe that as a community, if these messages are circulating and becoming widespread, they will filter into the mainstream and influence the policy makers. I think the goal is to maintain these discussions so that people are forced not to ignore them.

When you perform live, do you impart any kind of political message?

I’ve never really done it. I’ve just started dabbling in that now, but I haven’t figured out exactly what I’m going to do. It’s very important to me that people know our show is a very inclusive and safe space. That’s why I’ve always been very open about saying we’re a queer band or I’m a queer artist, because then all the queers come out. It’s nice to have a space where people can go and not feel out of place.