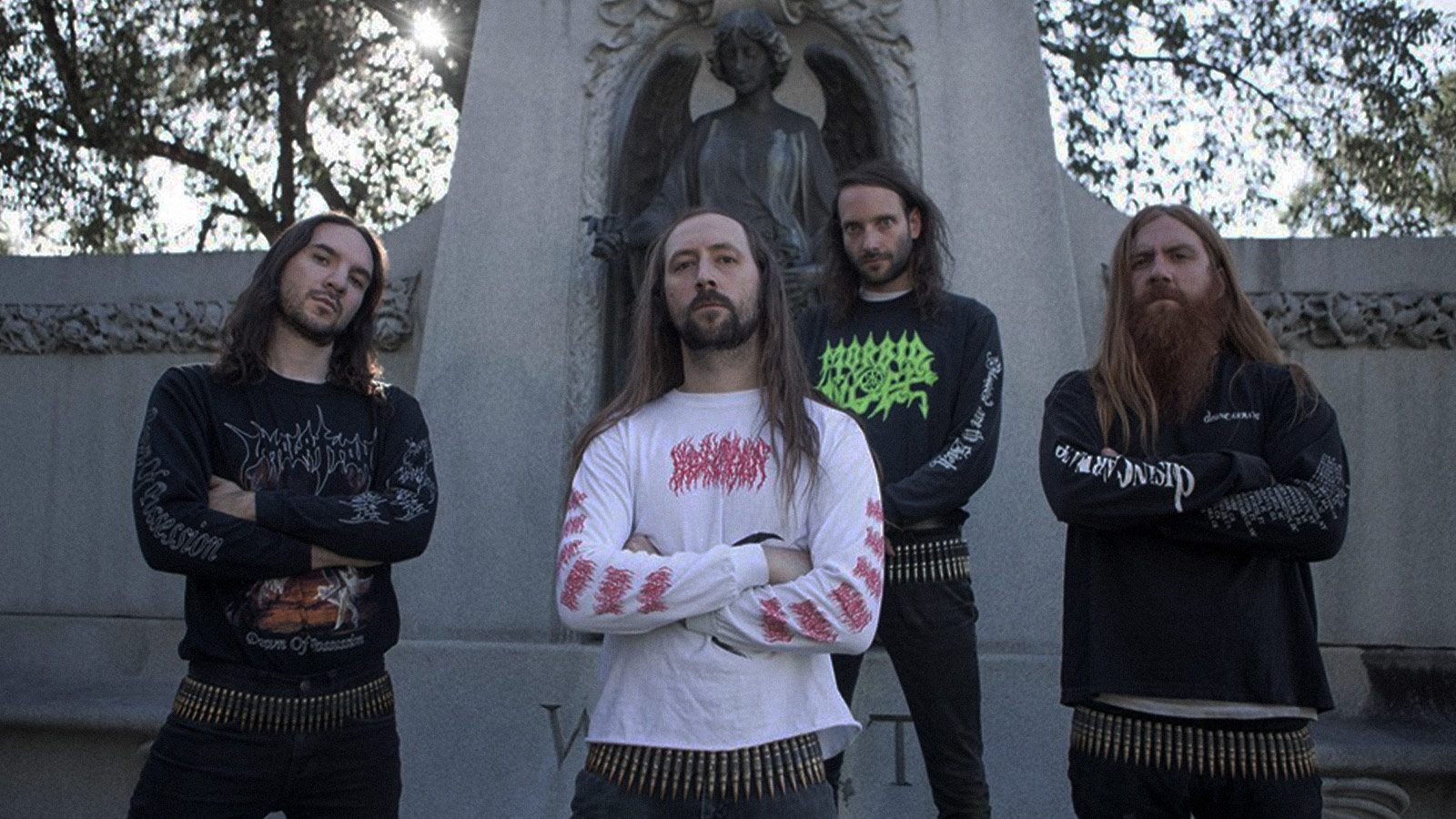 “Our current world and the state of human politics is a perfect illustration of how the human experiment has failed. One need only watch the news for a few minutes to see the state of affairs as a complete catastrophe,” says Isaac Faulk, drummer and founding member of Blood Incantation. “That is ultimately the point of Blood Incantation, to posit ideas that question the status quo; it is not our job to change everyone’s mind, merely to offer different ideas on our position in the cosmos.”

The Denver death metal band rose to underground fame on the strength of their 2015 EP, Interdimensional Extinction, and became full-on critical darlings following 2016’s debut full-length, Starspawn. After three years of relentless touring and writing, they’re back with Hidden History of the Human Race. It’s a labyrinthine, compositionally fearless prog-death odyssey that manages to take everything Starspawn did well, and do it even better: the riffs hit harder, the atmospheric passages are more effective, and the band’s lyrical obsessions come across clearer. The album asks us to consider new ways of thinking about the world and our place in it, by looking to the stars, yes—but also by looking within. The title of lead single “Inner Paths (To Outer Space)” serves as its thesis statement.

“Spirituality is an outlet for understanding the unknown, and what is more unknown than our cosmos? Perhaps the only thing more mysterious is our own consciousness,” Faulk explains. “That is why it is even more important for us to be explorers of inner space, to fully venture into the darkest and most treacherous waters of our own minds.”

The band uses imagery traditionally associated with science fiction to drive home their heady philosophy—right down to the stunning cover artwork by the legendary British sci-fi illustrator Bruce Pennington—but they don’t see themselves as a “sci-fi-themed” death metal band. For one, they take this stuff seriously. When they bring up ancient alien theory to question the official story of how the pyramids were built, it’s not because they think it’s cool (although they likely do)—it’s because they want us to rethink our most fundamental assumptions.

“The inherent belief that our culture, political system, and overall civilization are the apex of humanity, that progress in this age is inherently good, should be dismantled and evaluated from an objective point of view,” Faulk elaborates. “The story of our species tells us that we are animals with amnesia. We do not fully understand where we came from, which leaves quite a bit of blank space to fill with our imaginations. As a band, we just take this to its most interesting conclusions to create an internal dialogue within the listener, helping them ask questions they may have only considered in passing.”

As it turns out, proggy, transcendental death metal is the perfect vessel for asking those questions. Blood Incantation, along with peers like Tomb Mold and Artificial Brain, have brought cosmic death metal back from the edge after a generation of hyper-technical bands with more chops than ideas poisoned the well. While Blood Incantation are plenty technically proficient as players, their music is miles from any conventional notion of tech-death.

The four songs that comprise Hidden History are genius-level arrangements, each one a richly rewarding world of its own. “Slave Species of the Gods” is the most straightforward track on the album at first blush, but even as it barrels forward for its entire runtime, it changes up the riffs on the fly like a hockey team making line changes on a power play. “The Giza Power Plant” leans into ancient alien theory with its accompanying Nile-nodding Egyptian flourish. “Inner Paths (To Outer Space)” is almost meditative with its extended atmospheric sections, though they’re interrupted by some of the heaviest riffs on the record. The album culminates in the stunning “Awakening from the Dream of Existence to the Multidimensional Nature of Our Reality (Mirror of the Soul),” an 18-minute epic that the band chases down countless interdimensional rabbit holes without ever losing focus. It’s as reminiscent of Hemispheres-era Rush as it is Blessed Are the Sick-era Morbid Angel, a perfect encapsulation of the Blood Incantation sound.

Despite the style of music they play and the themes they tackle being objectively challenging, the band has achieved a kind of universality that’s rare in extreme metal. They’ve toured with death metal OGs like Cannibal Corpse, Immolation, and Demilich, but they’ve also found support in the punk and hardcore communities and become one of a handful of active metal bands who the generalist music press has latched onto. While well-deserved, it’s definitely a bit baffling.

“I have noticed this as well, and it strikes me as surprising too,” Faulk says. “I’m happy that so many people are as excited about this weird branch of music as we are.”