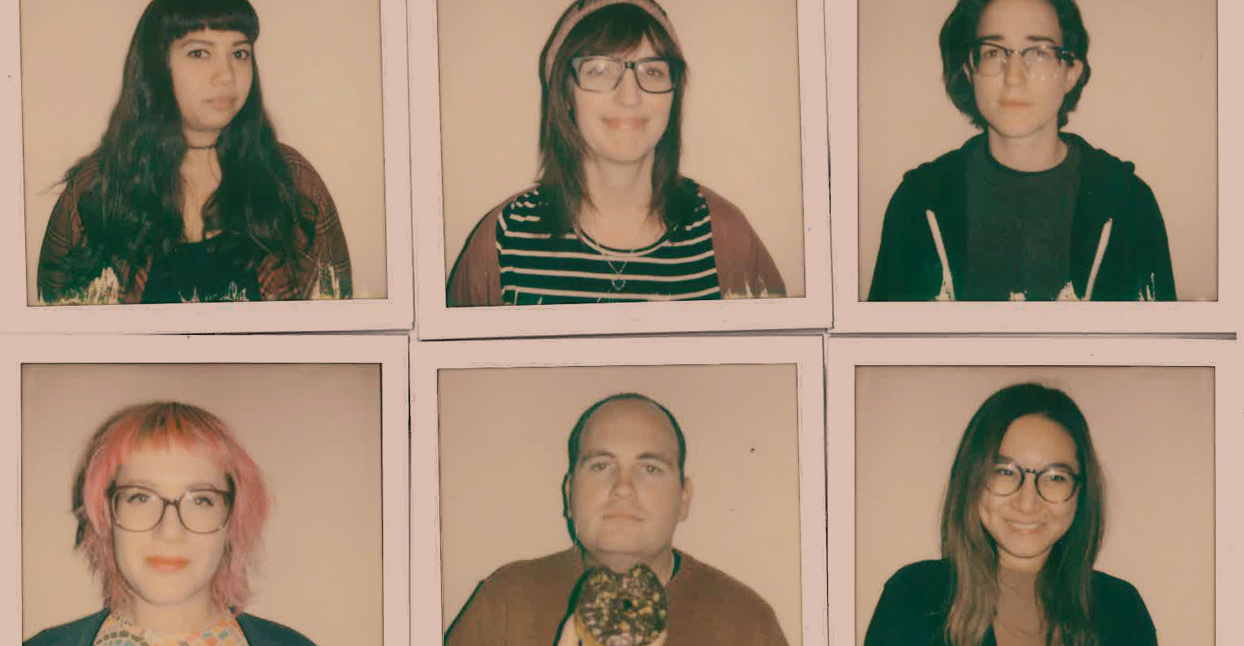 You can’t talk about Aster More, the Philadelphia-based six piece dreamy shoegaze band starting to make waves in the city’s music scene, without talking about their origin as part of this past year’s First Time’s The Charm show. The event, which featured eighteen bands playing their first show ever, was created in order to promote the idea that music should not be closed off to marginalized people or to those who have never played in a band before.

The first Philadelphia iteration of the event (similar events happen in cities around the U.S. and overseas, including Portland, New Orleans and London) was in 2013, leading to the formation of bands like See-Through Girls and Marge; its ethos in Philly is very much a result of a larger, intentional cultural shift over the past decade to make Philadelphia’s DIY scene a lot more inclusive and diverse. Carolyn Haynes, Aster More’s guitarist, singer, and saxophonist—just on one song, “Dream Sequence”, but still!—has also been playing music in Philly for a number of years, most notably in Ghost Gum and the underappreciated Catnaps. Haynes reflected on that general shift while discussing Aster More’s place in the city: “I think Philly is really good at checking itself. … I think we’re pretty good about saying to someone else, ‘Hey you can’t be doing this, this isn’t cool.’ I think that opens it up to be able to have something like First Time’s the Charm and have it be so popular.”

That self-awareness and intentionality in actions is important. According to Aster More’s keyboardist and singer Kristine Eng, while the event translates anywhere, “It’s cool that it’s a Philly thing, because it’s good to see that Philadelphia is making strides towards bringing minorities to the front. I think it’s important that our music scene thinks about that and is trying to make a place for that.”

To be considered for First Time’s the Charm, a band had to be able to say yes to at least two of the following three criteria:

Aster More said yes to all three. According to bassist Ariel Lin, “I don’t think this group of people would have come together without First Time’s the Charm.” This sentiment was repeated by many of the bands in the time leading up to the event, of which I was both an organizer and a participant.

Lin had never played in a band prior to Aster More; she says she was inspired by her friend Melissa Brain, who had learned to play drums in Marge. “I thought it was really awesome,” Lin says, “and everyone there was really excited and supportive of the whole cause, and so I thought it would be a really cool idea to be a part of the second [First Time’s the Charm].”

First Time’s the Charm is not there to allow people to cross off ‘be in a band’ from their bucket list, nor is it to create the next generation of musicians. At its most basic, it’s a purposeful environment for people who have historically been marginalized—especially when it comes to the music scene, even in its DIY variations—to feel comfortable existing as creators, even if they’ve never played an instrument before. Eng says, “First Time’s the Charm gave me the ability to reach out to other people and say, ‘Hey I want to play music with you,’ when I don’t think I could have been able to do that if this event didn’t exist—because I didn’t have any experience, any background in playing music for a really long time; I’m very much a novice at what I do.”

That act of reaching out to people to form a band can be more difficult than it sounds, particularly when you feel as if you don’t belong.  As Eng puts it: “Going to people who are experienced, who have played in bands before, and have been playing their instruments for most of their lives and saying, ‘Hey, do you want to play with me? I have no idea what I’m doing,’ is really scary. But because this exists and it’s such a supportive community it feel okay to do that, to reach out to people and build something new and not feel weird about it.”

While not everyone in Aster More is new to making music, the juxtaposition of experiences between the six members has definitely helped shape their sound. Drummer Patrick Graham, who has been in bands (Spraynard, Nona) since he was a teenager in the Philadelphia suburbs, says that having people in the band with less musical experience has been a benefit rather than a hindrance: “There’s … a beauty to people who haven’t written a lot of songs in their lives and the way they approach songwriting [versus] ‘I have ten years of all these rules that I’ve set up for myself that are hard for me to break.’ So it’s cool to get back to breaking those rules and just writing a song cause it’s what comes.”

Haynes—who, according to Eng, provided the initial spark to start the band—agrees. She explains that the songwriting process in the band revolves a lot around the members learning from each other. “Just cause you’re strong in one area you might still be weak in another,” she says. “So working with a bunch of people who all have [their own] strengths and weaknesses—it opens it up for everyone to feel more comfortable messing up all the time, because we all do it.”

Playing shows, recording, and even the simplest function of a band—regular practice—have been valuable experiences for the members, especially considering that they weren’t even sure if the band would last past the initial performance in July. Amanda Hagenbuch, who along with Haynes and Rachel Wetzel make up Aster More’s three-headed guitar attack, said, “I think the goal was, at first, just to get everybody together and to get people in the band that hadn’t played instruments in a while and use it as sort of a learning experience… Once we started playing together we all realized we really liked each other and we really liked what we were playing. So First Time’s the Charm really got us together, but once we were all already together and seeing what we created it became more, like, ‘We’re still going to do this, right? Everybody really, really loves this, right?’”

Up until being asked to join the band, Hagenbuch, who has been playing guitar since she was 10, had been feeling “super defeated” about the Philadelphia music scene. “I just felt like there’s this weird rule that for some pockets of the music community that ‘if you’re not this caliber of a musician why are you in a band’ or ‘you can’t write a song unless it sounds like this’ or ‘this is the kind of music we write, this is the genre we want to be, and you’re not that so you can’t be in this,’” she says. Aster More has defied that. Wetzel, who also plays in Dreambook, explains that being in the band has give her the chance to grow as a musician: “I feel like I was very pigeonholed into my style and my comfort level and then coming here I feel like [Haynes and Hagenbuch] have made me a better guitar player… It’s set the bar a little higher.” That idea of growth, pushing people past their comfort zones to create something more, is also integral to the mission of First Time’s the Charm.

Aster More’s first release, a self-titled EP, was released digitally in December and will be on tape soon; their sound, which stretches from dreamy indie pop to heavy shoegaze, is reminiscent on this recording of everything from Versus to Ride to The Promise Ring. Moving forward, they plan on eventually recording a full-length album and touring (“We’re just letting it happen organically and playing shows here and there,” says Lin). They’ve played alongside pretty standard indie bands like Loose Tooth, Marge, and Sun Organ, as well as on more diverse bills—they just played a benefit for the Community Futures Lab and Philly Black & Brown Workers Collective with the noise duo Drums Like Machine Guns and the political hardcore band Soul Glo.

No matter what the future brings, just being able to play music in this band has been a life-changing experience for everyone involved, especially those who hadn’t had the opportunity to do that in the past. “There’s nothing I would want to change from the experience,” Lin said. “From a personal point of view [I] can push myself a bit more to learn the bass more, and push myself creatively to write music for the band. But I understand that other people have been doing this for so much longer than me so I don’t feel like I’m comparing myself to [them]. It’s been really good. Everyone’s been really supportive and honest and I’ve had a lot of fun.”