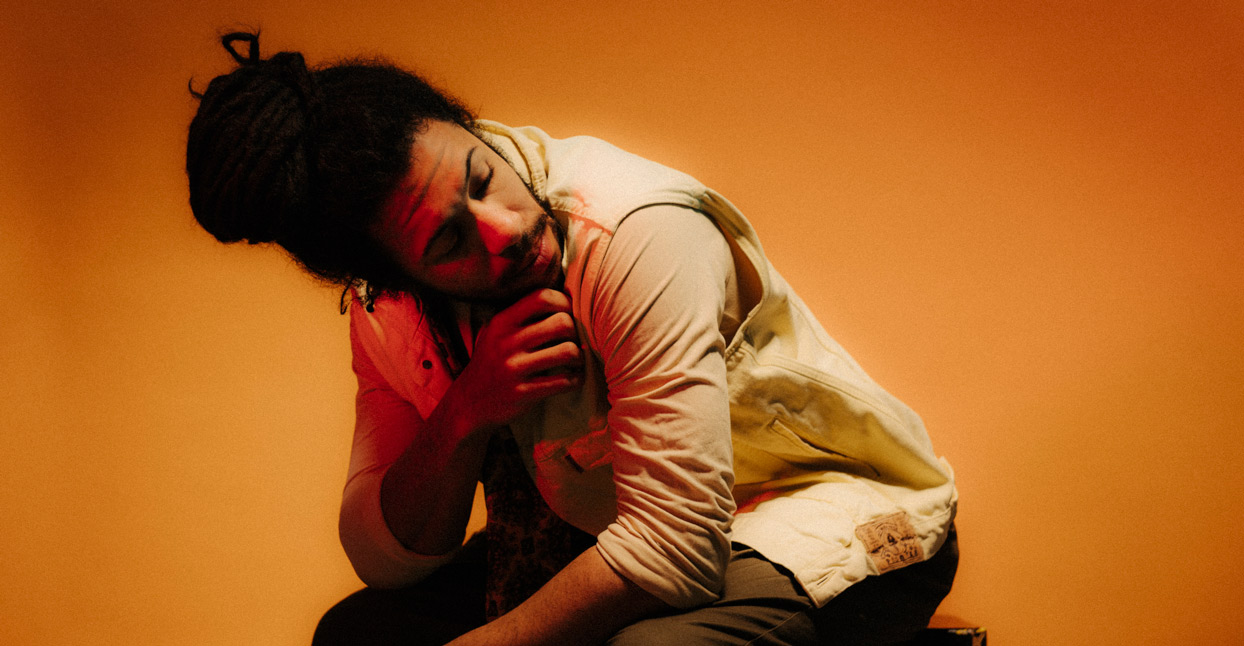 “I’ve been keeping myself fairly busy,” says Ash Walker. That may be an understatement. Aquamarine, Walker’s Night Time Records debut, is only his third LP, yet the young Londoner is constantly recording new music, remixing his favorite tunes, dabbling in dub, reggae, and jazz, and collaborating with his fellow U.K. dub-adjacent tastemakers. That is, when he’s not DJing as an opening act for The Specials.

“From the DJing point of view, having a broad, sort of eclectic taste in music comes out in a lot of my records,” says Walker. His previous albums, Augmented 7th and Echo Chamber, and his work with Ebi Soda, Zeb Samuels, Resonators, and more hint at that reach, moving from raucous club-core to dub to Radiohead-like, minor-key percussion jams; fans of In Rainbows will love it.

Aquamarine is a gentler beast. Across its 40-minute runtime, Walker presents a refined upgrade to his grab-bag approach to underwater jazz that focuses more on conventional songwriting, brightened by peppy sing-along melodies. It’s also the first Ash Walker effort that sounds like it was made by a band in a room, as opposed to a man by his lonesome. You can hear that right away on album opener “Under The Sun.” Fellow Londoner Laville, who serves as Walker’s voice on half the record, makes a plea to play in the sea with you; Walker’s gurgling production provides the water—loose and dubby and free. If it came out in 1974, it would have inspired suburban kids to check out King Tubby.

“I felt a lot more comfortable writing this one,” Walker says. “I had a lot more time to make it as well.” Some of that is due to the fact that this is the first album Walker recorded at home. “With previous albums, I was pretty much living in studios and writing in them. This one was much more organic and came about more naturally.” It helps that he enlisted producer Jonathan Shorten, who has worked with such pop-forward acts as Boy George, Brandy, S Club 7, and more. The album’s other notable guests include the great Marc Cyril, Walker’s go-to bass player, and Yazz Ahmed, the trumpet and flugelhorn player who has worked with Nile Rodgers, Lee Scratch Perry, and, you guessed it, Radiohead.

Another key element is the album’s attention to sound—right down to the inclusion of old-school vinyl pops and hisses. This is what Walker calls his “anti-sound engineer” approach. “From an engineer’s point of view, I kinda go against the grain,” he says. “I’m not a fan of clean, precise, and perfect. I’m quite an advocate of mistakes. I’m a big fan of fuzzes, crackles, and all the stuff that a normal engineer would try to clean up and get rid of.” Walker did have one engineering guide for this record: old King Tubby LPs. “You’ll never get a sound like that, because the man was a genius,” says Walker, laughing. “But I like to use his music as a reference point for where my highs and lows should be. He was a sculptor of frequencies, and I learned a lot from just listening to his records.” Walker succeeds, particularly in the newfound prominence of the bass in the mix. “Being a bass player myself and often writing songs first on bass,” he says, “it’s massively important! I put a lot of focus in mixing down the bass.”

Another important Ash Walker musical factor: flavor. He often describes his own songs as having a specific taste, an idea that becomes literal for his band’s new multi-sensory live set-up. Thanks to artist Ezra Lloyd-Jackson, The Ash Walker Experience now has upgraded visuals and even curated smells to accompany each song.

“Ezra codes these visual patterns that react to what we play,” says Walker, “which gives the impression that the visuals are floating. And we have these diffusers that we let off at different times throughout the gig that helps take people on a sort of ‘smell memory’ journey. We really want to go for touching all the senses, making it a little more accessible for people who may be visually or hearing impaired. I’d like to think that my music could benefit any person.”

It’s a genuine and beautiful gesture from a genuine artist making beautiful music—the latest step for a young artist who’s already made his own claim as a notable “sculptor of frequencies.”