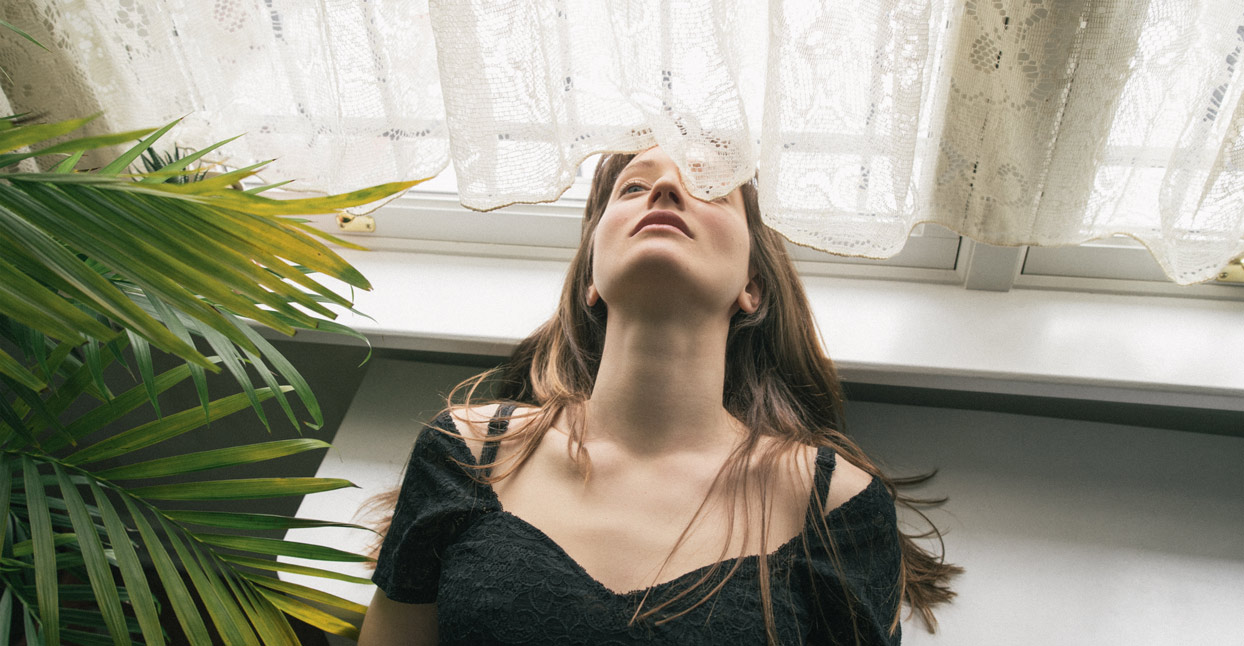 When Annie Hart first started working on the songs that would become her debut solo album, there was one question looming large on her conscience: What the hell is the point? “It was this all-consuming thought,” she tells us via phone from her home in New York. “Like, we’re all gonna die, shouldn’t I be helping the homeless instead of this? It just seemed like a random use of my time when I have a lot of other useful skills for the world.”

As one-third of the synth-pop trio Au Revoir Simone, Hart—along with bandmates Erika Forster and Heather D’Angelo—has spent the last 14 years making dark, dreamy songs that feel as if they’ve been plucked from some neon ‘80s otherworld. Though Au Revoir Simone has been on hiatus since 2013 (save for a brief small-screen reunion as part of this year’s Twin Peaks revival), its members have kept plenty busy in the time between; while Hart went solo, D’Angelo pursued an environmental science degree, and Forster formed protest rock band Nice As Fuck with Jenny Lewis and Tennessee Thomas. Hart also gave birth to her second child—something she says deepened her questions about what it meant to be putting out music at this point in her life.

With Impossible Accomplice, Hart channels these bigger existential questions into eight bracingly intimate songs about love, loss, empathy, and crumbled relationships. Though the album’s shimmering synths and shuddering drum machines will no doubt call to mind Au Revoir Simone’s alluring repertoire, Impossible Accomplice finds Hart taking a more minimal approach to arranging, as well as exploring deeply personal lyrics. “But you come with me again because you’re dying to be free / And I come with you again because it comes so easily,” she riffs on “On The Way Down.”

Following her recent U.S. tour, we spoke with Hart about going solo, reuniting with David Lynch, and how she rediscovered her purpose as a songwriter.

How did this batch of songs start?

One was actually intended for the next Au Revoir Simone record, and it never happened because we took the break. The other ones either started—a lot of the ideas started when I was riding my bicycle, actually. I ride my bike a lot, and the rhythm of riding a bicycle, combined with being a little bit distracted by paying attention to what’s around you, it frees your mind into coming up with ways to entertain itself. So if you’re a songwriter, you entertain yourself by writing a song. If I overhear something, or if I’m just thinking about my day, and I think of something that sounds like a melody, I’ll just repeat it in time with the motion [of the bike] and get chorus ideas. I have a lot of voice memos of me singing while also panting like crazy, or whispering because it’s New York City and there’s a lot of people around and I don’t want anybody to hear me. Then I’ll take those ideas and when I have the hour or the half-hour free I’ll listen to them and then kind of figure out what the chords are underneath it.

There’s this mix of heartbreak and happiness across the record. Do you find yourself more inspired by one versus the other?

Honestly, ‘Hard To Be Still’ is a happy song. ‘My Heart’s Been Broken’ is about empathy… the overarching theme of that one is, ‘I’m not judging you because I’ve been there too.’ But all the other ones—and every other song I ever wrote probably—are all about failed relationships in one way or another [laughs]. I just feel like it’s so hard for me to dwell on my happiness. When I’m happy, I’m experiencing the happiness, and that’s what I’m thinking about, and that’s what I’m enjoying. When you’re sad, and when you’re dwelling on things or emotionally processing stuff, it’s a really internal time. It’s a time when you’re not looking to go out and grab some drinks with your friends. It’s a time when I’m looking to be staying in my basement analyzing my feelings on the situation.

Where do you look for non-musical inspiration?

I’ve been really getting into poetry lately. There’s so much good poetry, and I never really spent much time reading it. I’m currently obsessed with the writer Grace Paley. She sort of dropped out of writing and became this ’60s activist, but her poems and short stories are so descriptive and the words she uses are so beautiful. I read one of her books and immediately went back to the beginning and read it again.

Au Revoir Simone showed up twice on Twin Peaks: The Return. Were you a fan of the show?

I missed Twin Peaks the first time. I was a little too young. My older brothers could watch it, but all I ever heard was the eerie soundtrack up in my room. After we met David in New York and started doing events with him, we all kind of delved into the back catalogue. We ended up watching the original two seasons of Twin Peaks in the tour van on Heather’s iPod with an earphone splitter [laughs]. We were basically sitting in each other’s laps and screaming the whole time, our heads all three inches away from each other’s. I think that was my ideal way to watch it—by yourself is too much. And it was nice to be able to analyze it together. If you’re just watching it by yourself you’re just alone thinking, ‘Is that real?’

Now that you’ve done a month of solo shows, what have you taken away from the experience?

You know, when I first started this project I kind of went down a rabbit hole. After Trump was elected I was pretty depressed about a lot of things—the state of the world and the direction it was headed in. I was really upset about the dichotomy between fake news people and quote-unquote liberals. My Facebook became, ‘I’m blocking so-and-so because they think Trump said this and it’s true’ and ‘I’m blocking this person because they voted for him.’ It was tearing families apart.

It seems so cheesy, but I really feel like my goal as a musician is to bring people in a room and have them experience the same thing at the same time, and have them use me and the songs as this vehicle for getting people to feel open towards the other people around them. I don’t know how that’s going to translate or if that’s going to be effective, but I definitely really make an effort. I feel like talking to a stranger, or just looking in a stranger’s eyes, or just being connected to the general community is so important. I feel like our society is shot unless we can bring people together.