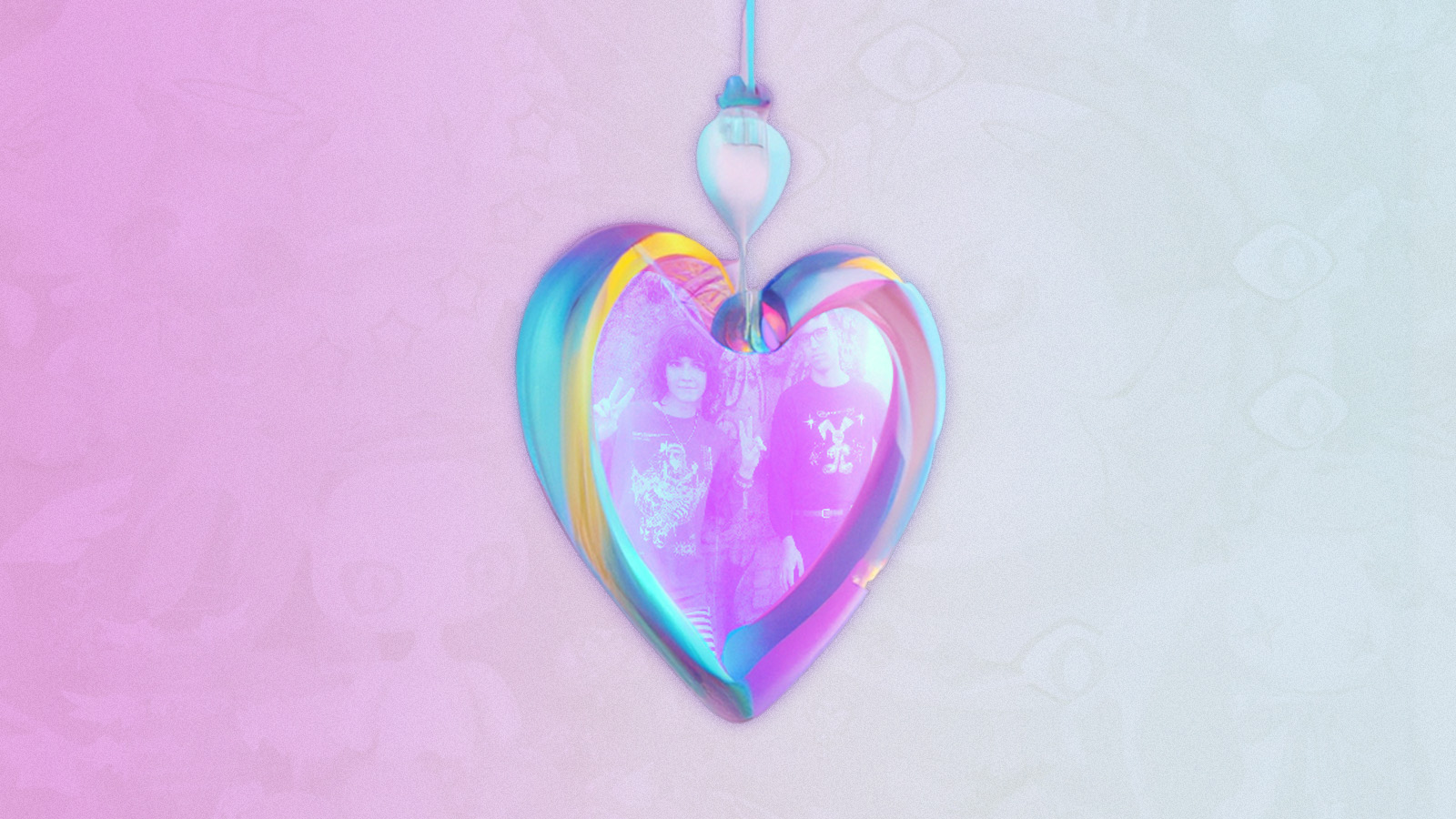 Asked to describe their band’s sound, Ada Rook and Ash Nerve instantly have an answer: “brutal euphoria wave.” The descriptor becomes a refrain throughout our video chat, with Nerve and Rook often repeating it back and forth between each other. “It’s our catchphrase,” Rook jokes.

The sound of Angel Electronics—full of blast beats, screams, and sunny major key choruses—fits right in with both artists’ prolific histories in wildly upending traditional genres. On their debut ULTRA PARADISE, the duo borrows just as much from Rook’s industrial solo output and the noise pop of Black Dresses as they do from Nerve’s melding of bubblegum pop and happy hardcore on his own and in watchusdiedotcom. “The thought was,” Nerve says, “the weird contrast between those two sides would make a unique sound.”

Angel Electronics’ inspirations—the maximalist industrial metal of Strapping Young Lad’s City, the genre-anarchic metalcore of Paledusk, Slipknot’s “flair for the dramatic and theatrical,” Maximum The Hormone’s swerves from bubblegum pop to deathcore—cover just as much sonic territory. But one band gets referenced most: the J-rock idol group BiS (and their sister group BiSH), Nerve’s “absolute favorite group of all time.” In BiS, Angel Electronics saw the possibility in pairing unapologetically poppy melodies with heavy production, and a kindred drive to artistically push themselves to their limits.

An Angel Electronics song can pull from any and all of these influences. ULTRA PARADISE opener “WALL OF SUMMER” comes out of the gate with a pummeling barrage of blast beats and drop-tuned chords, only to barrel into bright, soaring harmonies. Tracks like “SECRET TEACHINGS OF ALL AGES” invert this by leading with the melodic and saving their gnarliest breakdowns for late in the song. Rook offers another description of their sound: “death metal on molly.”

Though Rook and Nerve have been friends since 2016 and occasionally work on each other’s material, ULTRA PARADISE marks their first album-length collaboration. For Rook, the band was an escape from a stressful sudden move from Toronto to Hamilton due to black mold. “We were like nowhere,” she says. “I was just like, ‘Fuck it, Ash, do you want to form a band so I can do anything with my brain that’s not focused on this shitty little town?’”

With Nerve in Los Angeles (“We consider ourselves a Los Angeles band,” he says, “because we both live here in our hearts”), the two began trading files over Google Drive. Nerve would send fully-written demos to Rook, who would handle production and sometimes rewrite hooks as needed. Working together came naturally—Nerve loves songwriting but hates producing, while Rook finds songwriting hard but loves “the tedious minutiae of production.” Both love singing, and many of the tracks on ULTRA PARADISE were either written or reconfigured to play off the duo’s vocal interplay.

Ash emphasizes that Angel Electronics’ effortless dynamic comes from a shared valuing of novelty and “the alchemy of two people coming together—you can’t really predict what’s going to happen.” Rook adds, “There’s a kind of chaos—trusting the other person to fuck it up in their own special way—that I think is the key to healthy collaborations.” Every new file sent between the two became a repeated exercise in saying “I can’t believe you let me get away with this,” as Nerve puts it, be it his lyrics about Western esotericism or Rook “sneaking in djent breakdowns” on tracks like “EVIL BEHIND YOU.” On album closer “RAINBOW,” Rook recalls nervously sending a file with a “really stupid breakdown in the middle,” only to have Nerve love it and keep it on the finished track. Rook chalks this compatibility up to both of them being maximalists: “We appreciate when the other keeps putting shit in.”

Lyrically, the most common figures throughout Angel Electronics’ songs are—suitably—angels. The two note that religious trauma and “the sense of dread you put in a child” is a theme across all their work. With Ash, that manifested as awestruck obsession over the Book of Revelation’s methodical descriptiveness. Rook, likewise, is compelled by the Bible’s angel imagery, specifically ophanim, for how they embody a “confusing sense of goodness” that’s both beautiful and “scary as shit”—a dichotomy reflected in the sound of the band.

This intentionality carries through to the album’s construction at large. Rook professes how important she finds album sequencing, and how she organized ULTRA PARADISE’s tracklist into symmetrical halves, right down to starting each side with blast beats. Dividing the album’s two halves is “PARTY GIRL,” a Rook-led track about a shy girl longing for an outgoing woman. Rook sees it as “the heart of the album,” lovelorn and tender synth-pop building to a cathartic, happy-hardcore climax. At its height, Rook and Ash harmonize “And if there’s a God above/ I think that He’s giving me a sign/ Because He opened my heart/ And helped me make you mine”: the most hopeful sentiment the album carves out of its religious themes.

In sonically adventurous tracks like “PARTY GIRL,” Angel Electronics are already looking toward their future. They mention a second album is already planned, and they aspire to push their extremes in pop and metal even further. If there’s one thing Angel Electronics hopes listeners take away from their debut, though, it goes back to the core motif of our interview. “We want to be the definitive brutal euphoria wave band of Los Angeles,” Nerve says. “Let’s see the younger generations come in and do better than us.” Rook is just as ready to stake Angel Electronics’ claim: “Maybe they’ll do better than us, but we’re the progenitors.”