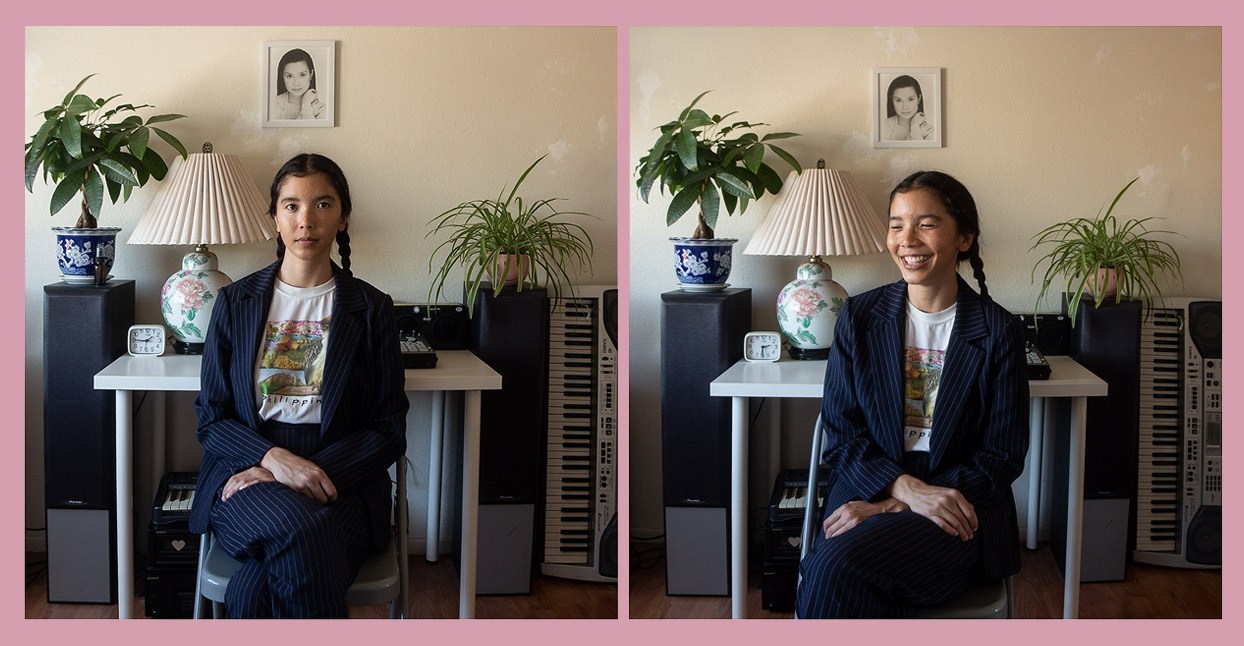 Ana Roxanne photographed in her studio by Inga Schunn

When ambient singer and composer Ana Roxanne originally recorded and released the unusually named six-song collection ~~~ in 2015, she did it alone, without any formal announcement or fanfare, keeping the deeply personal work largely to herself for fear of the reaction. Soon after, she moved away from her hometown of Oakland to Los Angeles. A friend passed her album along to producer Matthewdavid, who was looking for artists to perform at a daytime ambient series in a park. He reached out and offered to release her music on a larger scale. Leaving Records, the experimental label he co-founded, re-released ~~~ on March 15. “To share these songs again, years later, and have a positive response to them, it’s giving me so much motivation to keep going and not doubt myself as much anymore,” Ana says.

Throughout ~~~, Ana creates aural spaces for contemplation, layering drawn-out synth notes that sound like the tail ends of organ chords. On some songs, Ana sprinkles staccato digital pings, combining computerized sounds with those that suggest natural atmospheres and the sound of wind rushing past the ears. No two tracks rely on the same textures. Album closer “In a Small Valley” features a recording of a family gathering; ‘90s R&B streams softly from a speaker in the distance, while conversations and laughter populate the foreground before giving way to the sound of wind chimes and a small choir singing over rolling thunder.

Each track builds on silence and stillness, gradually reaching rapturous crescendos, often driven by Ana’s soaring voice. There’s something hymnlike about the music, but by braiding in undulating, reverb-laden synth harmonies under her ghostly, commanding vocals, it creates glory and power from intimacy and introspection rather than the swelling glory of church music. On lead single, “Nocturne” Ana’s voice emerges from within a foggy layer of synths, first hovering, then ascending, like it’s scaling a cathedral’s vaulted ceiling.

In some ways, the sound of ~~~ — which was created using a vintage Moog IIIP—mimics the weather in the Bay Area, where Ana grew up in a tight-knit Filipino-American community. That symmetry was intentional. “What I enjoy most about [ambient music] is you can create these soundscapes and these environments that you can exist in for a moment, an environment that can be transformative or just very peaceful,” she says. “It feels very powerful to be able to kind of create a space like that.”

Ana’s devotional style springs from a sacred devotion to pop music. She got her start by singing along to superstar ‘90s female R&B and pop vocalists—people like Anita Baker, Toni Braxton, and Whitney Houston—which her mother and four aunts would listen to after moving to the States from the Philippines. On ~~~, those influences make their presence known on “I’m Every Sparkly Woman,” a twinkling cover of Whitney Houston’s 1992 take on Chaka Kahn’s “I’m Every Woman.” Singing karaoke—a staple at her close-knit family gatherings—inspired her to pursue jazz singing. Despite the fact that she sang in church choirs throughout her childhood, Ana says she didn’t understand the healing power of music until performing with her college choir in cathedrals in the Midwest.

But despite the fact that music loomed large over Ana’s early life, she credits three specific experiences with sparking her interest in transitioning from jazz singing to pop music. The first came in the early ‘00s, when she was in middle school and heard Alicia Keys’s debut album, Songs in A Minor, for the first time. “I remember seeing [“Fallin’”] on MTV and just being very blown away by her,” she says. “It was all very powerful. Especially I remember I would listen to the first song on that album—she was playing Moonlight Sonata and kind of talking over it. When I look back on the song, it feels very spiritual.”

The second took place just six years ago, during a trip to India, where met a teacher who exposed her to the structures and performance of classical Hindustani music and singing. “That was another moment like when I heard Alicia Keys sing for the first time,” Ana says. “I heard this teacher in India sing, it was the same kind of like, ‘Wow, this is insane. I have to be involved in this or learn about it or do this.’” When she returned to the States, she continued her lessons and enrolled at Mills College where she began experimenting with analog synthesizers, composing her own songs, and studying the work of artists like Alice Coltrane. “That’s when I began to make these connections between what I found beautiful in music and what I wanted to do,” she says. “Learning about these avant-garde composers and then seeing how a lot of their influences came from Eastern traditions, that’s when it all started to come together for me.”

The third turning point happened this past October, about three years after Ana released ~~~ in secret and moved to Los Angeles to further pursue music. She posted a portrait of herself on Instagram with a caption that read, in part: “I’ve been wanting to do this for a long time, but it’s been difficult to know how or when. But here it goes: I wanted to let you know that this is what an intersex person looks like. I am intersex.”

“It feels like I was always singing in code with these songs. Music, even if no one knows what I’m talking about, is a way to be heard,” she says. “There came a point where I felt like I needed to be out, because even though I was singing about these parts of myself, I still felt invisible.”

Terrified for weeks about the decision to share her secret, Ana says she was overwhelmed with love and support from her community. On the other side of coming out, the songs on ~~~ retain their power, but some of them resonate differently. “When I was writing [“I’m Every Sparkly Woman”], I saw [it] as a testament to my femininity and empowerment as a woman. I felt a need to justify my feminine identity,” she says. “But now, I am not sure how I identify, but at least now I feel confident in that unknown. I feel comfortable in that exploration. When I perform that song now, it feels as though I am calling upon the confidence and beauty of the divas, and exclaiming that I love myself, whatever gender I may be.”

For Ana, her identity and her art are inseparable, and the divine transformative power she recognizes in both shines through on ~~~. The expansive sounds, the reflections of stillness in nature, her powerful voice, all converge to create a space for revelation and wonder. That she decided to share that space is a blessing.