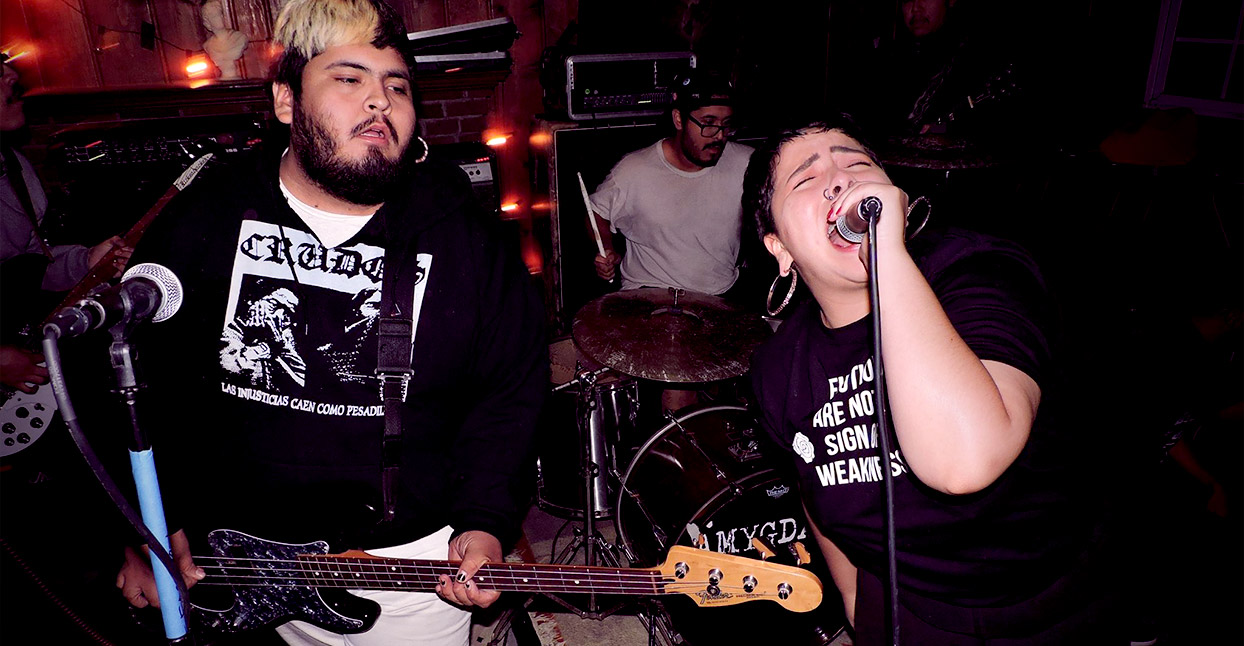 The results of the 2016 U.S. presidential election and Trump’s ensuing cabinet choices have brought the U.S. into line with a worrying global Western move toward the far right (see: Greece, the U.K., France). For marginalized people in the Americas both in and out of the DIY punk scene, all this means is that the curtain’s been ripped back, the chaos exposed—the colonial legacies and the long histories of resistance.

There will surely still be some cliched and irritating calls for punk to “get good again, like it was during Reagan”—as if important punk resistance suddenly stopped in 1992 with a Democratic president. (Anyone who’s been paying attention would beg to differ.) Five-piece San Antonio political punk cabal Amygdala position themselves as part of this ongoing tradition; they started making ferocious, caustic and outspoken hardcore together in 2014, and their 2016 effort, Population Control, certainly pulls no punches. “Semillas,” their latest track, was recorded live in October of 2016 on their recent tour, and features audio of a ceremonial prayer performed by indigenous Guatemalans at a benefit for Standing Rock that Amygdala also played, a powerful statement of pan-indigenous solidarity.

We spoke to Bianca (vocals) and Yole (bass) from Amygdala about the rise in visibility for queer punks and punks of color, how the punk scene at large can become more inclusive, and why punk is so useful still as a sound of resistance.

Hardcore punk seems to be having a renaissance in sound and progressive ideas, especially over the last few years. There seems to be a particular rise in the participation of people of color and queer-identified folks. How do you guys see yourselves fitting into this paradigm? How do you identify collectively as a band, and has this helped or hindered your acceptance as a band?

Yole: Yup. While there is a rise of people of color and queer-identified folks playing hardcore punk, let’s not forget that we are not the first and we aren’t the last. This isn’t anything new. It’s just the fact that white supremacy [and its] normalization for so many years has played a role into what punk is supposed to look and sound [like]. I think it’s amazing that there is a rise [or] renaissance. Being a punk of color, I didn’t think much of it because San Antonio is predominantly brown. Two years ago, touring outside of Tejas gave us a different perspective because we’re all brown bodies. Three [out of five] of us identify as Chicano/Chicana politically. We all come from Mexican/Latino migrant families, first and second generation. Everyone else was majority white, the ones that would come see us play. Sometimes we can’t help but feel tokenized at times because that’s the reality, but we’re here for survivors, we’re here for people/punks of color. It means everything to us when POC/queer punks come tell us after our set that we made a difference in their lives.

Bianca: For me, playing music is the way we express ourselves. I don’t think enough about who we are—how different we are compared to a lot of bands in our genre. We are all people of color. Our existence on that stage is an act of resistance. Pure and simple. I can never guarantee that when I walk on that stage that the audience can relate or learn from anything I express, because the majority of them are white. They can like our music, but the message is just as important. I hope that our platform has given space and hope to many other brown folk. Brown, queer, fat and poor in the hardcore punk scene—I want to break free.

Our narrative is unique. We are often neglected and fragile; “machismo” hurts us all. There were many obstacles we had to overcome before you saw us at our first show. Queer experiences are not all the same, especially for people of color. And even more so for the “undesirable”—fat, ugly, broken, disabled. It’s painful to see white, thin and conventionally attractive punks always being romanticized; not to mention they are typically more recognized for their music over someone like me. What I’m saying is, they got it easy. I have to work harder, smarter and [I have to be] unapologetic, to stand my ground. It is being on that stage, telling my story where I rightfully belong.

That is absolutely what’s up. It’s amazing that that history, particularly of Latino/a punks being erased is so prevalent—even though entire cities (like San Antonio) have majority brown scenes or entirely separate punk scenes where brown folks are the majority, like L.A., and Chicago. What are some ways that the national U.S. punk scene can become more inclusive to punks of color and queer punks.

Yole: By stepping up. Don’t feel sorry, do something about it. Don’t just glorify and then tokenize POC/queer punk bands. Don’t just cater to them and the shows they play [that they’ve put together themselves]. Don’t decide then that for one show, one night you’re going to respect their pronouns, their identities. Do that [at] every show; do that for POC/queer punks who show up, pay and support [every] band. That’s being inclusive.

Bianca: The first would be to offer help to book more POC bands. I can’t tell you how many times I see people bend over backwards for bigger, whiter bands but when a fellow POC punk asks them for help, they are often less enthusiastic. And trust me, the music can be very similar. The only thing different? Maybe we just don’t look the part. There are a lot more brown and black folk getting involved, playing music and booking, but the fact remains that we are not the majority. What you can do to become more inclusive is to encourage and invite more punks of color. You can tokenize and glorify our music all the time—but I often see the absence [in the audience] of my people. The participation of my people should be the most urgent interest when putting together a show. Punk is for everyone, but it was made for people like me.

Why do you think punk and hardcore are the best styles for your message?

Bianca: The musical culture embedded into hardcore/punk isn’t only present at shows, it follows us in [our] everyday lives. It empowers individuals [and] communities, and is a way of inhabiting our space in this world. The sound itself is intense and powerful, which leaves a lasting impact [for] the audience listening.

Speaking of life outside of punk rock, what are some of your non-band related activities? How does hardcore inform how you move through those activities?

Yole: If we’re not working, we usually hang out together, make each other food, [and] drink beers together. [We] try to not always bring up band stuff, but we’re always planning out what we could do to create a better scene and what we want out of that. To tell you the truth, Amygdala—and hardcore in general is pretty much all we’ve got and are invested in. It’s our life. At the moment we’re working on starting new punk/hardcore bands and branching [out] into making an Amygdala family tree, haha. We’re gonna start working on a new album in January [of] 2017. So there’s not a lot of room for other activities besides music. We hang with family and go to shows. I, however, have invested in community organizing [and] protests with a local union and have been involved with working with youth. That’s been my other passion. I’m going to school full time in the spring, so for me it’s gonna be all about bands, school, and community.

What’s the songwriting process like? Are there general themes you work with? Does Bianca write all the lyrics, or is there a process? It can be tricky narrowing down a narrative that all members agree upon.

Yole: As far as lyrics go, [these are] all Bianca’s narratives and [are about] her experience growing up dealing [with] and overcoming her oppressions as a woman of color. This is her platform. The more [general] social-political songs—she and I work together on those, feed each other ideas and write together for the most part. I’ll write about 80% of the songs and introduce them [to the band], then Carlos, our lead guitarist, will write other parts to it. Then [come] the drums and then our second guitarist learns the riffs. And i already know my bass parts. If there is an issue we want to bring to light, we ask the rest of the crew about it and get their take/opinions on said subject. Bianca, Carlos, Cesar and i have been the longest standing members that drive Amygdala since we started in mid-May 2014.

Bianca: Yeah, I can elaborate! The process is always random. I can’t keep up with journals and such. Usually I’ll be at my desk at work and have sticky notes everywhere of themes, lines and titles when they pop up in my head. I simply can’t sit down and only write lyrics. It just doesn’t work that way for me. If a song truly needs to come out of me, it will do so and it will be written like I saw it in my head. When I try to sit and write, it just doesn’t seem genuine to me. I think too hard and that’s not what I want. I want passion, rawness and realness. My favorite writing process is being able to hear a new song being written [by the band] while I write the lyrics. That way it is musically driven.

What are some bands you’re interested in? Anyone you saw on your recent tour? Any interesting stories? What’s in the future for Amygdala?

Yole: Soul Glo, Closet Witch, Big Hand//Big Knife, Bonglord, Krimewatch, Mercy Ties, Velvet Sunshine, Hive Mind, and Mean Girls are some bands we saw on tour that I thought were amazing. A story from tour? Brian from Thou booked our show in New Orleans at this cool art space; [the show] that ended up getting shut down by folks who work for the city [who] said it was too loud. Only one band… was able to play that show [at the space]. The show got moved to Circle Bar, we played and it was a good show. One of the guitarists [from one of the other bands] then told our guitarist Carlos that we sounded like At The Drive-in and Joliette, which was funny because we don’t sound like those bands—but I guess when you’re brown and Mexican, we all sound the same. New album for 2017. Playing a fest in Mexico City in February. Break Free Fest! in May—[it’s] a fest that focuses on POC. A West Coast tour in the summer and hopefully a Mexico/South America tour. We’ll see—but keep up with us on Facebook or write to us at Amygdalapunk@gmail.com.