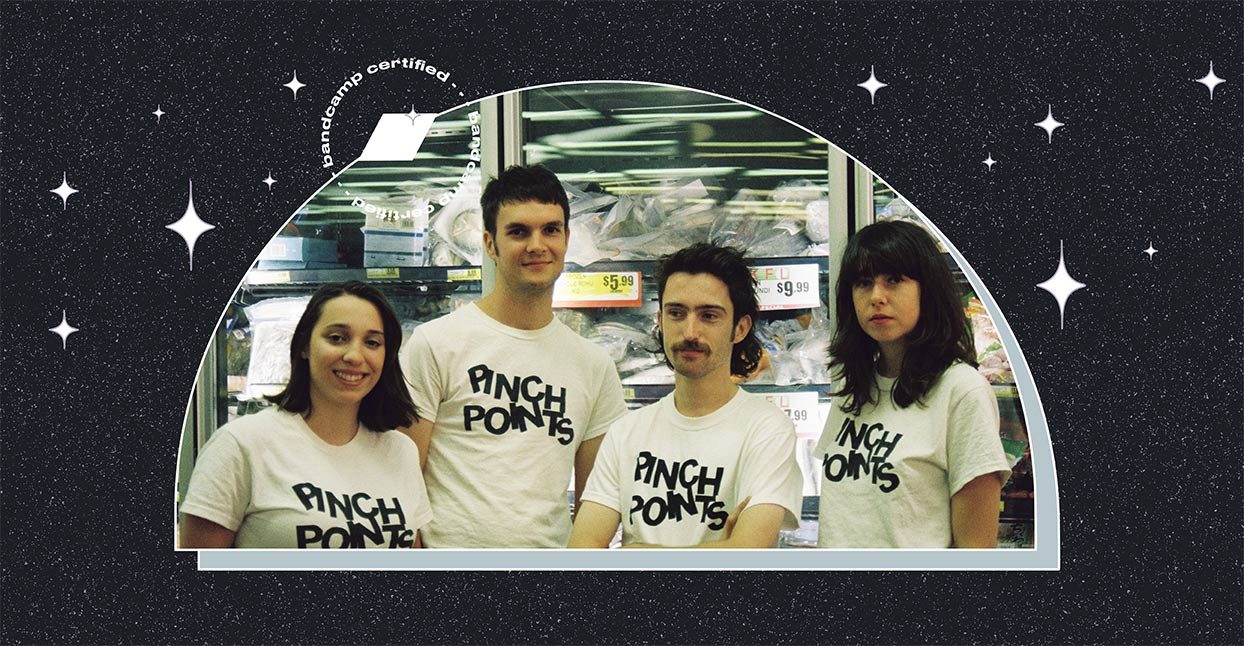 In 2017, when the numerous bands Adam Smith played in all decided to take a break at once, the Melbourne singer and guitarist found himself with a sudden pocket of downtime. He decided to use the extra hours to do something he truly enjoyed: form another band. He noticed a spare, ominous warning on the flatbed of a passing pickup truck—“pinch points”—and wondered, “What kind of music would ‘Pinch Points’ be?” The answer was a stack of short, jerky songs about ominous machinery.

He recruited housemate (and frequent collaborator) Jordan Oakley to join him on guitar, and the duo began rehearsing and recording at home in Melbourne’s Coburg suburb, along with bassist/singer Acacia Coates and a string of successive drummers. (Isabella Orsini became the band’s permanent drummer in July of last year). Pinch Points’ debut EP Mechanical Injury—of Bandcamp’s Best Records of 2018—landed somewhere between the mouthy indie rock of Parquet Courts, the riotous power-pop of Royal Headache, and the equally angular music of older bands like Wire and The B-52s. Their new full-length Moving Parts follows suit, retaining the group’s self-production and ‘zine-style visual aesthetic.

For a band that describe themselves as “turbo-punk,” Pinch Points stretch out on the new record—more than half the songs even cross the once-distant three-minute mark. But even though their songs may go on for a few seconds longer, they still focus on avoiding the obvious, paring back any extraneous elements. “Get in, get out, leave before the lights come on,” says Smith. “When we started writing, we tried to work with different song structures and move through different sections at a different clip, to keep things from getting repetitive. [So] the songs just ended up finishing when they did.”

Though Smith spearheads the songwriting process, which often starts with just a title phrase, his isn’t the only voice in Pinch Points. Coates sings lead at the opening of “Lifetime Member” and flanks Smith for a dual attack on itchy, anxious anthems like “Spelt Out,” while Orsini belts out blistering vocals from behind the drums on “Stranger Danger,” which began life as a look at online paranoia before swiveling to focus on women’s troubling lack of safety in public spaces.

On both, that song and “Put Out,” Smith takes a more democratic approach to the lyrics, given that the two songs are damning examinations of flawed men. “He wants to get our input as women,” says Coates, “which I appreciate a lot.” Coates also marvels at Smith’s ability to write entire songs in his head while working his day job at a liquor store (or, “bottle shop,” as they’re called in Australia), somehow holding onto riffs and lyrics until he can commit them to his phone during lunch.

One of the grabbiest approaches to lyrics arrives in closing number “Ouch!!” (not to be confused with the album opener, called “Ouch!”), on which Smith recites the entirety of a glowing review written by Bandcamp’s own J. Edward Keyes before adding some meta-commentary. “The second half is a riff on the last song of the first release, about wanting all of us to disappear into the band. We were trying to review our position in the band and online.”

For a band who wear their own T-shirts in their current press photo, Pinch Points do seem somewhat insular and self-aware. And while they’re playing outside of their home state of Victoria for the first time in June, they already feel like a trusted brand, thanks to their spot-on social commentary, rapid-fire tunefulness, and DIY approach—all of which are more apparent than ever on Moving Parts.