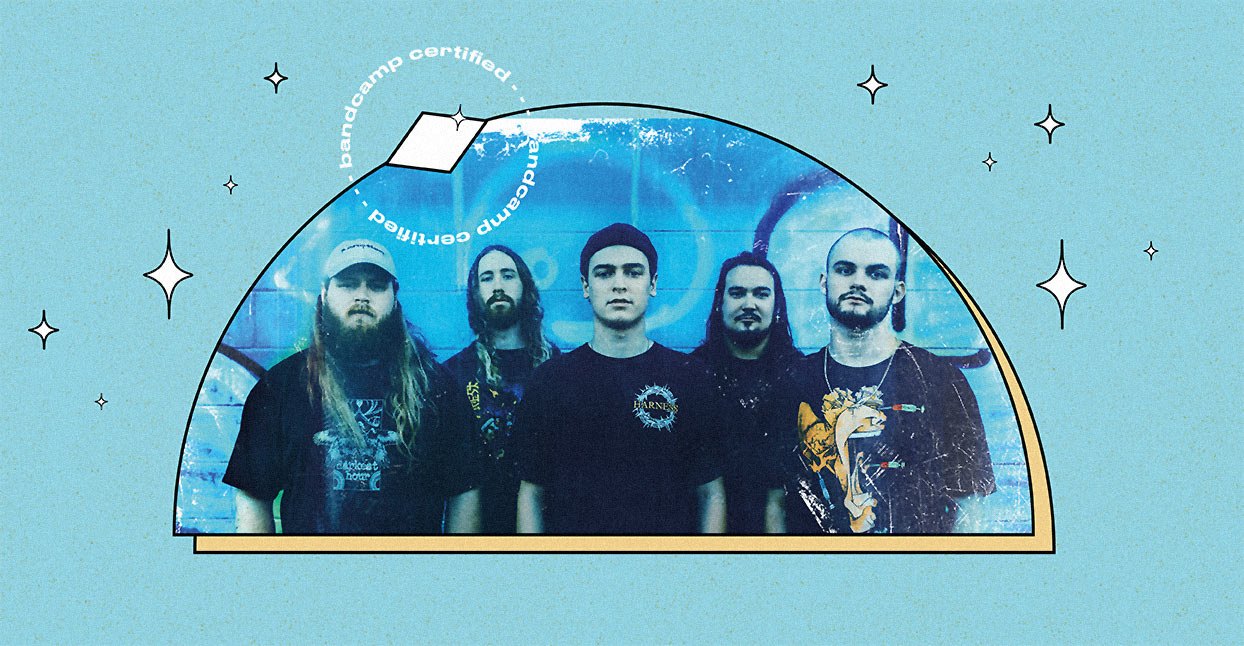 “When we’re writing, we’re literally going, ‘Would we mosh to this?’”

That’s Knocked Loose guitarist Isaac Hale, talking about the writing process for—well, all of his band’s songs, but especially those on the Kentucky hardcore troupe’s new record, A Different Shade Of Blue. “It’s so much fun to write that way, because when it pays off, it really pays off,” he says. “When you get to the live experience, you get to see what you envisioned play out in real life. And that’s what it’s all about.”

For Hale and his bandmates—vocalist Bryan Garris, guitarist Cole Crutchfield, bassist Kevin Otten and drummer Kevin “Pac Sun” Kaine—crowd participation is priority number one. “I think it’s a unique experience that you don’t get with other styles of music,” Hale says. “Hardcore is cathartic. It’s what made me fall in love with the genre, and it inspires me everyday. The reason why I am who I am is the live experience of playing shows, being at shows, participating at shows.”

In fact, Hale dropped out of high school at 16 to pursue Knocked Loose full-time. His parents—a couple raising a son in conservative Oldham County, Kentucky—gave their blessings. “I’m in a rare situation where I knew what I wanted to do from a really young age,” he explains. “So my parents always knew, too. There was a bit of stigma around being a high school kid who drops out to be in a band—I know that sounds real rough on paper—but my parents believed in me. I feel very lucky.”

That was 2013. Soon after, Knocked Loose hit the road for nearly a full year. They released their first EP, Pop Culture, in 2014, followed by their full-length debut, Laugh Tracks, two years later. With a sound that combines the metal menace of Entombed and Slayer with the dissonant hardcore of Disembodied and the modern edge of Code Orange, they toured relentlessly and built up an impressive following on social media. (As of this writing, they have over 109,000 followers on Instagram and over 98,000 on Facebook.) By early 2018, Knocked Loose were headlining a month-long U.S. tour with revered L.A. hardcore vets Terror opening for them. Somewhere in there, Hale got his degree online.

If the now 22-year-old guitarist has his way, A Different Shade Of Blue will be the springboard that launches Knocked Loose to the next level. With an album cover design that vaguely recalls that of Swedish hardcore game-changers Refused’s hugely influential 1998 album, The Shape Of Punk To Come, Knocked Loose’s latest is also meant as a statement of intent.

“This is the new era of Knocked Loose,” Hale says. “As a band, we’ve pushed hardcore places it hasn’t been. We’re bringing it to new people. We’re expanding the boundaries. We’re not sucking ourselves off or calling ourselves the next big thing, but we’re doing our best to create something new and exciting that new people can connect with and listen to. Most importantly, we think we’ve pushed our boundaries past what we could see.”

Time will be the judge of Hale’s claims. But pre-release tracks from A Different Shade Of Blue—“Trapped In The Grasp Of A Memory,” “Mistakes Like Fractures” (which appeared earlier this year on a teaser 7-inch), and “…And Still I Wander South”—seem poised to incite the band’s rabid fanbase to physical extremes. The top YouTube comment for the “Trapped In The Grasp Of A Memory” video sums it up best: “This album is gonna send me to the hospital.”

“If people wanna show their appreciation by fucking moshing or jumping off of some shit, just do what the music makes you feel,” Hale says with a laugh. “Because the music makes us feel fucking insane. We are very, very proud of it.”