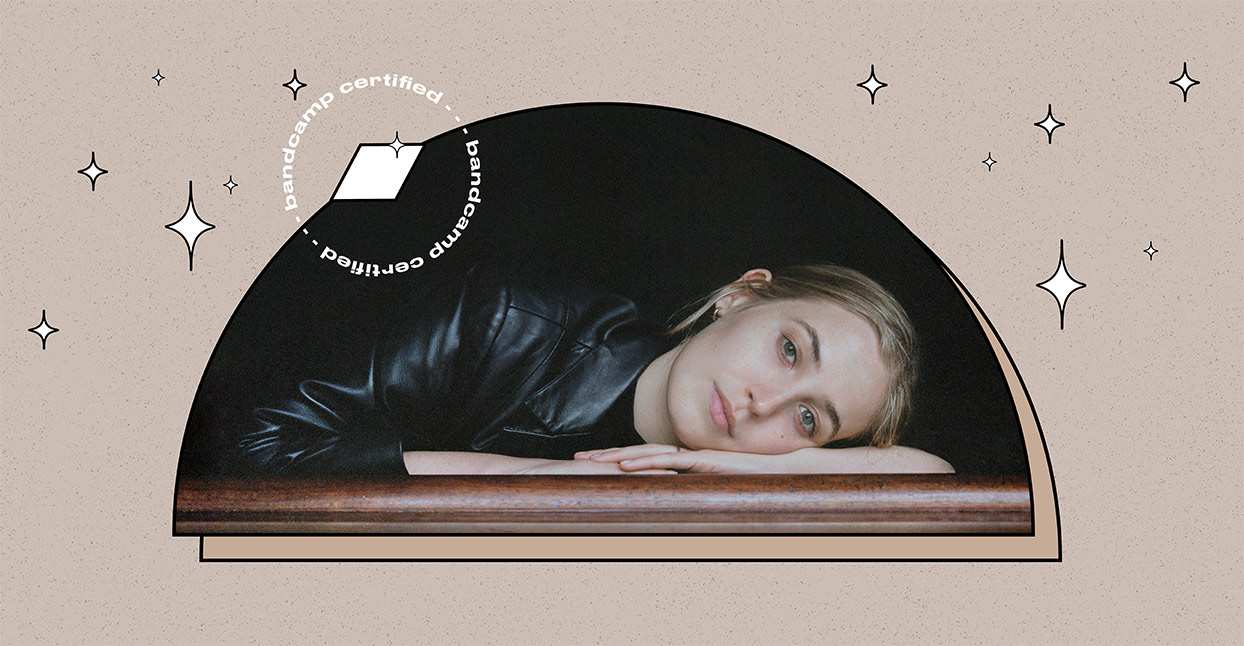 When it comes to interviews, every musician has a few topics that are off-limits. For Harriette Pilbeam, it’s trashing local pizza places. “Can I go off the record?” the 26-year-old Brisbane singer-songwriter who records as Hatchie earnestly asks, leaning in to dish the dirt. “We always try to get a lot of pizza when we’re here [in New York]. We got a lot of recommendations from people before we leave [home]—then we asked a native New Yorker, and they said, ‘Oh no, don’t go there!'”

It’s a balmy April day, and we’re chatting amidst the sound of clattering cups at the Australian coffee outpost Two Hands in Manhattan, while Pilbeam takes a mid-afternoon breather from Hatchie’s U.S. tour with indie-rock duo Girlpool—which included a date at Brooklyn’s Music Hall of Williamsburg the night before our meetup. This string of dates have provided a different experience than the whirlwind string of North American performances following last year’s breakout Sugar & Spice EP.

“We didn’t get too many days off,” she recalls of the last jaunt, which included a mind-boggling six SXSW performances over the course of five days. This time out, Pilbeam has been more conscious about setting aside time for self-care and mental rest; refreshed and decked out in all black, she speaks equally enthusiastically about sleeping in and choosing to abstain from alcohol during this outing.

“It’s the best way for me to stay at my best—I know a lot of artists who don’t drink on tour anymore,” she explains. “People see the music industry as a career that they take seriously from the beginning now.”

Pilbeam has reason to adopt a more serious approach. If Sugar & Spice was an out-of-nowhere brief burst of swirling dreampop that struck an uncanny balance between the genre’s dual predilections towards thick haze and bracing clarity, her debut LP Keepsake sounds bigger and bolder in every way. It builds on the influences lovingly streaked across Sugar & Spice—the Cocteau Twins’ glimmering darkness, the translucent guitars of ’90s scions Belly and Lush, My Bloody Valentine’s six-string sonic curvature—and blows them up to arena-sized levels, equally recalling the rubbery ’80s pop of INXS and the airy disco dreams of defunct indie-pop legends Air France.

As with Sugar & Spice, Pilbeam transcends mere pastiche simply by crafting a genre-blend that sounds impeccable and untouchable—a combination of sounds that speaks to her own genre-agnostic approach. “I think genres won’t exist in the future—it’s already becoming that way,” she states. “What does indie mean? Reverb and guitars, or independent? It means a million different things now. Genres held artists back in the past. I don’t want to be cornered as a shoegaze artist, or any sort of artist.”

Pilbeam’s confidence in what she doesn’t want to be betrays the fact that she once thought she was done making music for good. It’s been a part of her life since a very young age; her parents both originally worked in radio before her mother switched to social work, and her father moved on to working more directly with music venues. Some of her earliest memories involve gathering around her uncle’s piano at Christmas to sing songs with the rest of her family, with tambourines and shakers passed around for her and her three older siblings to join in; all four Pilbeam children took lessons from a young age and sang in choirs.

“I tried to be better at other stuff in school, but music was really my only career path,” she recalls. Pilbeam also struggled socially at the all-girls school she attended; during our conversation, we talk about the recent Hulu adolescent cringe-comedy PEN15 and its pitch-perfect evocation of the essential and fleeting teenage pain that is growing up amidst others similarly struggling to belong. “I never found it that easy to make friends,” she says. “I cared so much about people liking me, to the point where it was to my own detriment. Now, I can’t even remember some of those peoples’ names.”

After finishing high school, Pilbeam joined indie-rock group Babaganouj after bandleader Charles Sale enlisted her bass talents. During their initial burst of activity, the Lemonheads-y quartet played what Pilbeam describes as “a million gigs for 10 people, for years” while building a surprisingly fervent fanbase in Japan; during this time, she also attended college to study the music business itself—a potential career path, for an indie musician, roughly equivalent to a gazelle hopping into a lions’ den to learn how to be properly eaten alive.

“It was a weird choice for me,” Pilbeam acknowledges. “I didn’t want to study performing music—but I also didn’t want to be a manager or a publicist.” More crucially, during this time Pilbeam didn’t know whether she wanted to pursue being a performer at all. “When I was younger, I thought that I couldn’t be a singer or songwriter. I looked at pop artists like Lady Gaga or Kylie Minogue and said, ‘That’s not me at all.’ But when I was in my late teens, I was like, ‘Well, I could be in a band.’ Maybe that says something about the lack of role models for young women in the industry, I don’t know.”

But the songwriting bug kept biting, and Pilbeam eventually departed Babaganouj to figure out her next move and toy around with a few rough sketches she’d been working on. One of those early songs was “Try,” Sugar & Spice‘s chiming highlight that she sat on for a year after writing, until bandmate and boyfriend Joe Agius pushed her to record a proper studio take. Around this time, Pilbeam also discovered the sounds of shoegaze and dreampop, which were a perfect sonic fit for the demos she’d been working on in private: “I was writing really poppy songs, but they didn’t really work as pop songs—so I figured if I used these guitar tones and sounds, it’d fit the songs better. Once I realized that this was how these songs should be produced, I was like, ‘This works.'”

In 2017, Pilbeam uploaded “Try” to Triple J Unearthed—the music-discovery arm of the national Australian radio station—on her birthday, May 4, and what followed made for quite the birthday present. “Someone I knew had messaged me and said they heard I’d had something in the works, and that they’d love to hear it when I was finished. When I uploaded it, they were like, ‘Oh my God, this is amazing—we’re gonna play it today!'” A flood of attention from labels and managers followed, and “Try” entered regular rotation in the Triple J charts almost immediately. “It was surreal,” she recalls. “I’m not the type of person to jump up and down and scream when something good happens to me. I just get overwhelmed and cry.”

Since then, everything related to Hatchie—Pilbeam’s nickname given to her by her mother—has moved quickly. She signed with Brooklyn indie Double Double Whammy (“I prefer the idea of being on a smaller label—I don’t know how I’d handle being on a major”) and pulled together her other works-in-progress for Sugar & Spice. Now, just a year after that record’s release, there’s Keepsake—and Pilbeam’s already planning to start writing for the next album after touring winds down late in the year.

Despite the quick success, though, Pilbeam is nevertheless reluctant to embrace the spotlight, a personality trait reflected in the picture of her blurred face that adorns Keepsake. “It was a conscious choice,” she explains. “I didn’t even want to be on the cover, and the only way I was going to put my face on it is if it was obscured. I feel weird being the person who does the interviews, or all the talking on stage—I’m still struggling with it.” (It’s surprising to hear such a genial conversationalist admit that the middle of an interview.) “I don’t enjoy being the center of attention, and I’ve become more shy as I’ve gotten older.”

But Pilbeam is focused on the kind of personal growth that extends beyond forgoing booze at afterparties. “Feeling like I didn’t do things because I was scared of them is a big fear of mine,” she explains. “I’m not a person who takes risks, so that’s something I’m trying to embrace. I don’t do New Year’s resolutions, but I decided that this year I wanted to do things that would scare me. I already have a lot of regrets about not doing things when I didn’t have a chance.” After all, embracing the great unknown—gesturing towards the uncertainties that lie just beyond our field of vision—is what so much great dreampop is made of.