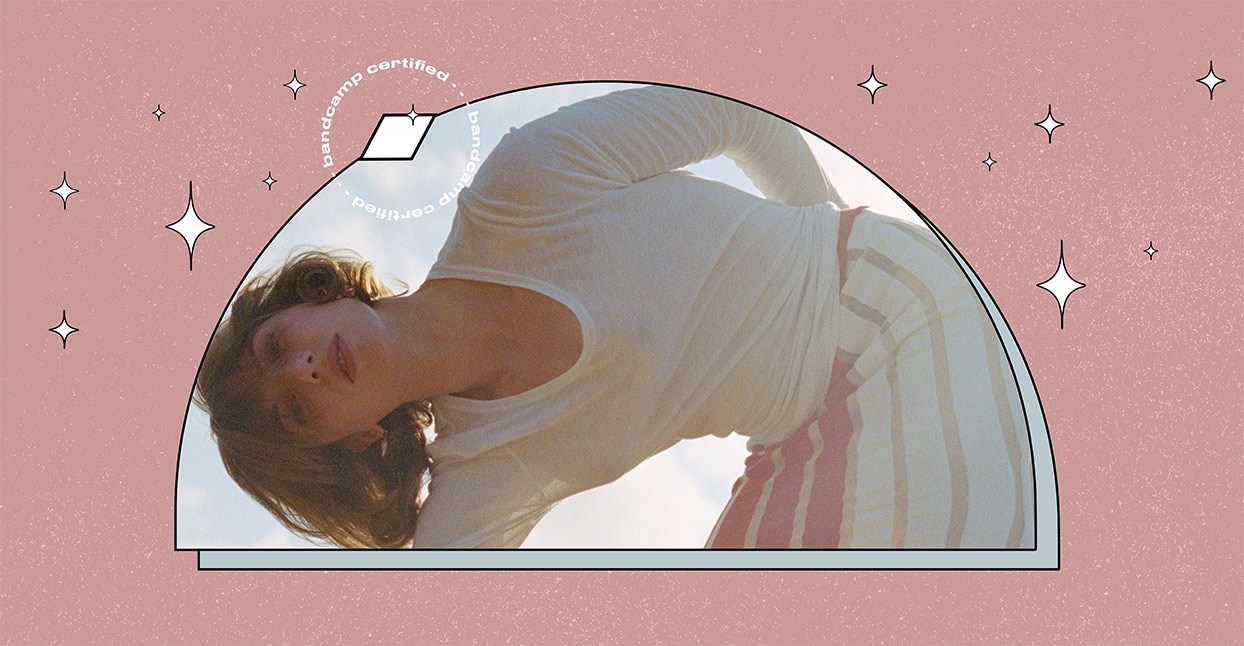 Certified is a new series on Bandcamp where we spotlight artists whose work we think is worthy of additional attention.

Aldous Harding is front and center onstage at Rough Trade in Brooklyn on the first night of the tour for her soon-to-be-released third LP, Designer. For the majority of the show, she’s been backed by a five-piece band—a necessity to replicate the fuller sound of the new material. Right now, though, the New Zealand musician is on her own, sitting in a silver chair with an acoustic guitar in her lap, about to launch into an elegant new ballad called “Treasure.” The audience’s pin-drop silence is typical of Harding shows, which are known for the intensity with which she commands the audience and the reverence with which they respond.

Even so, Harding seems nervous as she leans forward to speak into the mic: “I feel like I’m starting at the beginning with this show.”

Designer does represent something of a new beginning for Harding. Her previous release, 2017’s Party, was an intensely intimate and beautiful avant-pop record, but its spare arrangements, combined with Harding’s theatrical singing style, made for a dramatic listen. Designer is altogether warmer and more laid-back, with a generous sense of space and amiability in its arrangements. That was, Harding explains a few days before the Rough Trade show, an intentional choice.

“On Party, I felt like I was holding people in this space with me, using my voice to keep people in this thing,” she says, folding her slim arms around her torso as she speaks. “You’ll notice on Designer [my voice] sits back with everything. I tried to make it less about me. Instead of sitting in the dark, we’re sort of holding hands.”

With Designer, Harding was interested in creating an album that reflected her best intentions. “I wanted to deliver something that says: I love all of it. I hate all of it, but I love all of it,” she says. “Because that’s all you can do. There’s no other world to be in. So here goes nothing: I love it.”

There were other reasons Harding wanted to follow up Party with a friendlier record. For an artist whose music has been praised for its fearlessness, the sensitive Harding was stung by accusations that she relied on gimmickry to sell her art. Some of it had to do with her breathtakingly powerful voice and the unusual ways she chooses to use it: alternately girlish and sweet, rich and resonant, or keening to the point of dissonance—sometimes in the same song.

Some of it had to do with her almost absurdist performance style; Harding pulls faces, stares intently, and dances awkwardly when she isn’t playing an instrument. It can be a lot to process. Rather than meeting Harding on her own artistic terms, some critics reacted by dismissing her as more of an actor than a musician. But other people understood what she was doing.

“Ian Svenonius came up to me backstage at Primavera and was like, ‘Hey, I really like your show, I liked what you did,’” Harding recounts. “I said, ‘Yeah, it’s not for everybody,’ or something. And he’s like, ‘Oh please. You think putting your foot on a monitor makes the guitar sound better? It’s a show.’”

“I get that some people don’t buy it but I don’t buy their reasons for not getting it. I’ve never pretended to be anything else,” she continues. “It’s a show, and if people think the songs are clever—well, I wrote them. It’s just the approach I’m using at the moment.”

She describes her approach for Designer with a metaphor that wouldn’t be out of place in one of her songs. “I wanted it to sound like a clock with friends. Especially on the bigger songs,” she says, making clucking noises with her tongue. “I wanted lots of tick-tocks and people. I wanted there to be a kind of chug and groove without being too sexy.”

You can hear what she means on “Weight of the Planets,” one of Designer’s more straightforward pop tracks, which has a playful, cocktail hour-appropriate vibe in its tinkly instrumentation, and a slinky vocal performance from Harding. This being an Aldous Harding record, however, there’s an unexpected streak of synth violins and an underlying steeliness in the way she sings, “I can do anything / No one is stopping me,” in a register so high and thin it feels like she’s whispering to herself.

It’s a revealing line from an artist whose lyrics are often described as being inscrutable and vague. Yet Harding has never made any secret of being ambitious.

“‘Living The Classics’ [off Party] is about my ambitions,” she says. “You know: “Take mum to Paris / Jump on the big bed / We’ll be all right because I put it on a disc.’ That was like a confession. I’m just like everybody else. I want things everyone else wants. I want a nest, I want stuff. I want security so if I didn’t feel like writing for a year I wouldn’t have to, or I could take somebody I love away and help them fulfill their creative ideas.”

Those ambitions are reflected in the way she works, which she admits can be ruthless and laser-focused. Harding isn’t one of those artists who writes songs for herself; she approaches music like a job, her mind on the future: “I know that when you make a record and people like it, there’s going to be a next record. I’m being honest, [songwriting] comes easily and I love to write, but it doesn’t come necessarily from a place that people would expect. Sometimes it is, ‘All right, we’ve got to flesh out that riff, we need the songs.’”

Harding had all of the songs for Designer ready before entering the studio to record. The exception was mid-album banger “Zoo Eyes,” the verses of which were completed, she says, seven minutes before going in for a take. That’s unusual for Harding, who “likes to be prepared because improvisation and doing what you feel works for some people but what I try to do is very restrained. It’s not hard music to play but it’s the way that it’s put together that makes it interesting.”

In the case of “Zoo Eyes,” the last-minute edit ended up dovetailing perfectly with the song’s faded carnival atmosphere: “It worked out fine, because I wanted the verses to be insecure and questionable, and then in the chorus I give you these fantasy facts about the world, these sort of nothing statements and then the chorus gives you a gift.”

Although it’s more casual and carefree than its predecessor, Designer does feel like a natural outgrowth of Harding’s work on Party. She hasn’t lost her intense grip on her listeners’ collective heartstrings, and in some ways, the softer approach has sharpened the potency of her music. There are echoes of Party’s minimalism and experimentation in the lovely “Damn,” and Designer’s devastating closer, “Pilot,” an open wound of a song that ranks among Harding’s best in its restrained power and painterly lyrics, with images of boats in a harbor and bangles on an arm standing in for loneliness and isolation. It’s a brave choice to end a record that otherwise ties up its ragged ends in sparkly bows. But Harding is nothing if not brave.

“I’m not afraid to look like I’m trying hard, because I feel like our generation is so afraid to look like they’re trying. Everyone’s always…,” Harding mimes putting her hands in imaginary pockets as she speaks, retreating into herself. “Since when did trying something become uncool?” she asks.

At Rough Trade, Harding’s nervousness gradually fades as the show proceeds and the crowd responds to her new songs with rapturous, prolonged applause. When it comes time for the encore, Harding is relaxed as she delivers an unexpected cover of Gerry Rafferty’s “Right Down the Line,” updating the classic rock radio staple with bell-clear sincerity. Then she holds up a Rough Trade mug she has borrowed from the store (she promises to put it back afterwards) while introducing a new song, “Old Peel.” It’s not on Designer, but with whoops, clicks, and plenty of chiming instrumentation, the assertive number expands upon the “clock-with-friends,” sound of the record perfectly. Harding will be the clock tonight, keeping time by banging on the mug with a drumstick as she floats around the stage. It just might be the best song of the night.

“I’m not as confident as I once was,” Harding says with a smile. “But, like my mum says, I’m not above practice.”