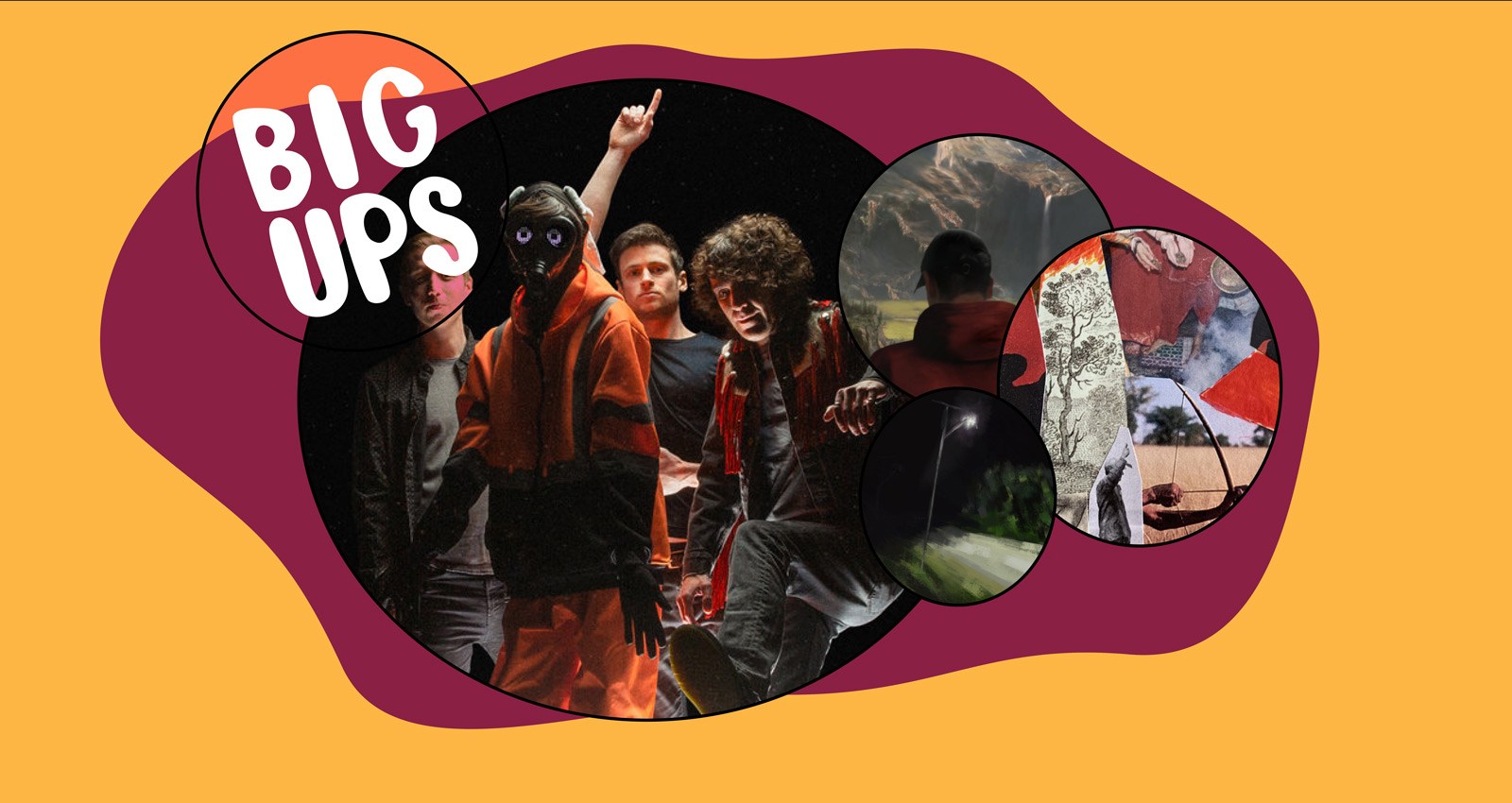 There’s always been something metatextual about the music of Car Seat Headrest. 2018’s Twin Fantasy was an autobiographical record about a doomed love affair, but it was also about the act of making art out of a story from your own life—like, say, a story about a doomed love affair—and what happens to both the art and the autobiography when you do that. On 2016’s Teens of Denial, frontman Will Toledo would periodically break the fourth wall to address the proceedings, or use bits from other pop songs to comment on his own work. But even by those standards the group’s latest album, Making a Door Less Open, is built on a pretty heady concept: The album is the result of ideas from Toledo and Andrew Katz’s electro side project 1 Trait Danger “bleeding over” into Car Seat Headrest itself, informing both the way the music sounds and the perspective from which they’re written. In the songs, Toledo plays a character called Trait, who wears a gas mask. (That part was in motion long before our current nightmare hellscape, and Toledo has taken pains to point out that no matter how often fact and fiction blurs in his music, these two details are unrelated.) “Having a different character became to me the focal point that the record could be built around,” Toledo says. ”That developed out of a variety of different things—out of 1 Trait Danger, out of some of the themes on this record about struggling with identity—there’s this idea of becoming someone else, or being seen as someone else. Everything just seemed to tie back into the idea of an alter ego—which people have done before. I just liked the idea of using a mask.”

Toldeo offsets these weighty ideas with the group’s most direct songs to date, shearing away his fondness for 7-plus-minute multi-part epics and—a few diversions into experimentalism aside (see: “Hymn”)—keeping everything streamlined. A very wise man once said, “Don’t bore us, get to the chorus,” and Toledo seems to have taken that advice to heart. “Martin” is one of the most open-hearted songs he’s ever written, its big, beaming vocal melody soaring high over its rickety-assemblage percussion. On “Life Worth Missing,” white-hot synths streak up the sides of the song like fireworks, as Toledo’s steers it into a chorus worthy of Ray Davies. And “Hollywood,” with its serrated guitar hook and bug-eyed, hollered-out vocals feels like a dead-on approximation of early Beck. (That its chorus, “Hollywood makes me wanna puke,” echoes “MTV Makes Me Wanna Smoke Crack” doesn’t hurt.)

That overt hookiness stems from the fact that Toledo read Bob Stanley’s paen to pop music Yeah Yeah Yeah just before he started working on the record. “I was interested in the idea that pop music just has, like, one basic unit, and that’s the whole song,” Toledo says. “Early rock & roll—it really just has the one hook that repeats and repeats. So I was interested in looking at how these sorts of songs carry energy through a couple minutes worth of time. Yeah Yeah Yeah was really helpful, because it had a lot of different examples where musically, everything’s just really simple—it’s just a couple of ideas. But in the performance, and in the way it’s arranged, you have variation. You can make it feel like a real solid run of energy, where it doesn’t lag. And so I just wanted to really condense stuff—get every line solid, every musical piece, just make each little component its own world, instead of lingering on any one [section] for too long.”

When it came time to select albums for this Big Ups, Toledo gravitated toward albums that, in some way, mirrored Making A Door Less Open—either in their use of alternate personas, or their focus on pop craftsmanship, even if the songs only last for a few seconds. “The way I usually use Bandcamp is that I go to the main page, scroll to the Discover section, and hit ‘New Arrivals.’ Then I’ll try to listen to selections from 20 different albums, or however many it takes before I find something interesting. I’m looking for someone who’s not gonna come up on my radar any other way.”

Here are just a few albums that have come across Toledo’s radar.

1 Trait Danger played at Anthro New England, and so did this band, and I fell in love with it. Live, there was a punk energy to it. He plays in [his raccoon] suit, and he has fingers cut out, so that he can still play guitar. It was really impressive—it’s kind of what we were going for with 1 Trait Danger—he’s definitely doing something that I want to be doing. Afterward, he introduced himself and said he really liked the 1 Trait stuff, and we kept in touch. We connected on a lot of levels, and the cartoon reality that he’s conjuring up in his songs always plays off of real-life situations. That’s something that I like to play with in both 1 Trait Danger and Car Seat Headrest, the idea that there’s humor, but the songs aren’t just for laughing about—there’s something else going on. And it’s not just hidden or sarcastic, it’s all going on on the surface. To me, that’s interesting art and interesting music, and it makes me want to dig deeper into what is actually being said. He’s really good at having lines in his songs that are totally absurd, then following them up with something that really hits home.

I just think this is a really good pop record. Like the last one, this is another record that comes out of the furry community.  I’ve been on the sidelines of the furry community for about 10 years—that was where I started off sharing my music. I had a Bandcamp, and then I also had a Furaffinity page, and that was where I started getting some attention. But I also made friends there, and sort of grew in a smaller arts scene for a while. At that time, it felt like there were basically no musicians at all in the community. But gradually it grew and now there are a lot of musicians in this community, and all different genres. This came out in 2018, and it was one of my favorite records—to me, it does pop music better than most or all of the records that I heard that were doing a similar thing.  It’s just sonically really rich and varied—and there’s also a lot of emotion in it.

So I found this record because this artist has another account—I think it’s called Bernie Beats—and it only had one song on it, this glitched-out remix. So I bought it, but I was kind of bummed that there wasn’t more. Then they emailed me and said, ‘Hey, that’s just a side account, here’s my main account,’ and I thought, ‘Oh cool, there’s a bunch of stuff I can dive into.’ This record has really cool production—I really value someone just doing it themselves and getting sounds that may not sound the ‘studio correct’ way, but are also something that’s more interesting. The songs on this record and on his other records all have this really interesting combination of pop and techno, but with rock song structures. Working on that level as an independent artist, you can do exactly what you want, as long as you have the basic know how.

I think I probably found this group in 2017. Their songs are just these acoustic fragments, they release super short albums, one after another. [This album is 19 songs in 19 minutes -ed.] I really liked that model of doing things, where you just capture the moment. That goes with what I was talking about with pop music—it’s not so much putting different things together, it’s seizing this one single moment. Records like this really boil that concept down into something that—it’s hard to call this ‘pop music’ because it’s so simple, but it interests me as what feels like a very pure, unadorned expression. Each fragment of this is exactly what was going on in their mind at the time they made it.

This one I heard about through a friend. This band is from South Korea, and they’re one of my favorite indie acts of the moment, because they really capture that sort of fun, irreverent rock energy that, for whatever reason, doesn’t seem like a super popular model right now. Sometimes their songs will be based around these fragments of English lyrics, and I think that’s the way to do it—don’t think about it too much, just build the songs up around the hooks. The production on this EP is really good, too. You can tell that they spent time on it. It’s lo-fi, but it’s not just thrown together, and that reminds me a lot of what I was doing early on. I think they’ve covered [the Car Seat Headrest song] “Bodies” a few times live, and after I saw those videos, I tried to restructure what we were doing with “Bodies” to try to match their energy.

Kai Whiston
No World As Good As Mine

I picked this because it takes elements of electronic and dance music, and puts them into something that functions as a whole record. It just becomes this really interesting instrumental record, and it’s one of the best produced records I’ve heard in a while because it’s using all these tricks and stylings of EDM music, where everything has to be really clean, and incorporating it into these weirder structures. Elements keep coming in and out, and you just get a really rich sonic landscape. He works with Iglooghost—GLOO is the name of that collective, and I think all the members are relatively young. All you need is a couple of talented people to bounce off each other, and everybody’s juices get flowing, and you can build your own little world either together, or in opposition to one another.

I just really, really love the song “The Old Victrola.” It was a song I first heard a while ago, and it’s very experimental—a lot of it is just this looping sample, this neverending vocal held note, while all of this feedback is going on underneath it. It really captures something that you couldn’t capture any other way, somehow. I think this is a live recording, and playing with it in that context, where you’re doing something live over this repeating work, it just has this incredible energy. I was having a bit of an anxiety attack the other day, and listening to this track was the only thing that was helping me calm down. It’s somehow sort of breaking pop music down into something that’s just there underneath, but it’s a thousand times more raw and more vulnerable than it was before. It really becomes beautiful just listening to it play out.