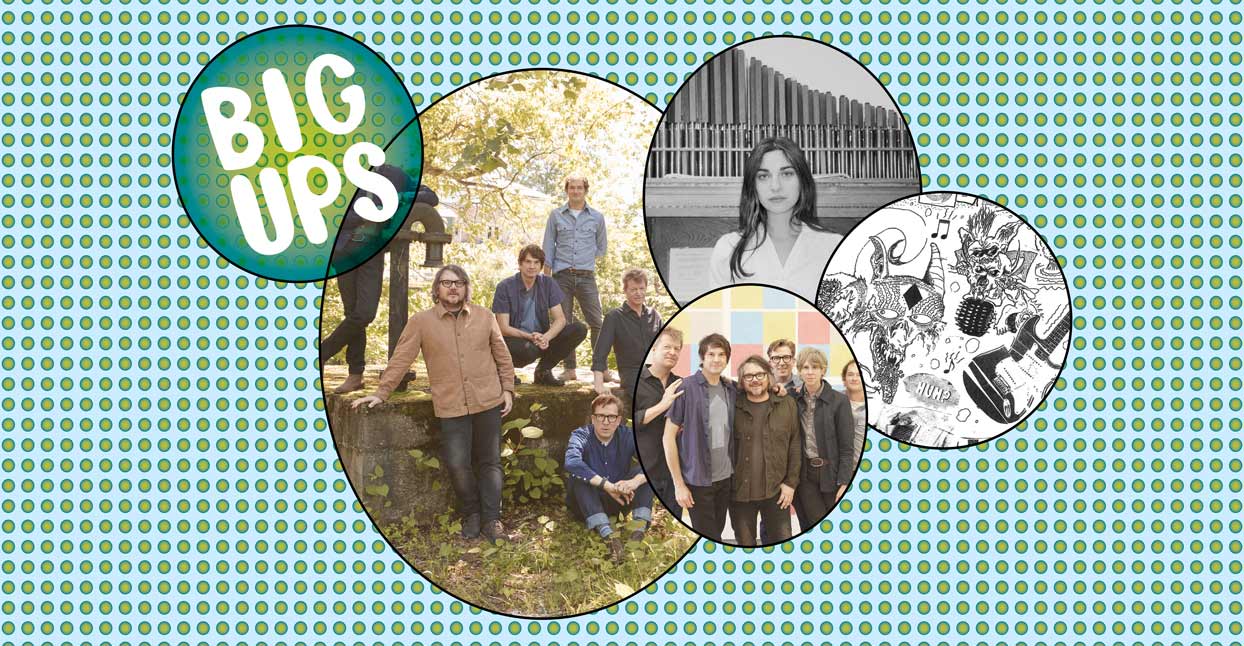 No matter how much he has on his plate, Wilco’s prolific frontman Jeff Tweedy still sets aside part of each Friday to discover new music. “If you’d told me when I was 12 or 13 that every Friday I could listen to basically every new record that came out, I’d basically lose my mind,” Tweedy says with a laugh, over a phone call before a show in Italy in support of his band’s tremendous new album, Ode to Joy. “Sometimes I form opinions about stuff that isn’t for me, like modern country, that I’m just curious about. It’s insane sounding, but I try to listen to everything.”

His choices for this installment of Big Ups reflect his relentless curiosity: below, you’ll find everything from goofy, lo-fi punk to somber organ meditations, and from lush left-field hip-hop to abrasive drone compositions. Yet the six records below have one thing in common: they all exemplify what Tweedy considers a sort of gold standard in music: “The first thing I’m drawn to is whether an album immediately strikes me as having its own internal logic—is it its own universe?” he says. “I automatically think, ‘Have I heard a record like this before?’ If I haven’t, I’m much more likely to continue to listen and see how much that feeling is sustained.”

Ode to Joy itself more than fits that bill. The album largely does away with conventional rock and folk song structures; instead, it embraces spare, impressionistic arrangements—often led by booming, elemental percussion—to create one of the moodiest and most haunting records in Wilco’s catalog, more movingly understated than the experimental Yankee Hotel Foxtrot, and darker than the uptempo Americana of Sky Blue Sky. “For this record, we tried to intuit rock music pretending we hadn’t heard any…we’d tell each other what we wanted to hear,” Tweedy says. And while he is quick to acknowledge that the band didn’t exactly “reinvent rock music,” it does sound, to a certain degree, like they reinvented Wilco.

As Ode to Joy makes clear, from the tense and restrained opening track “Bright Leaves”—which hangs glimmering sonic textures on thumping drums like ornaments on a Christmas tree—all the way through “An Empty Corner,” the mysterious heart-wrenching waltz that closes the album, Wilco have built nothing less than a world unto itself; just like Jeff Tweedy’s choices for Big Ups, it’s one to get lost in.

“I’ve been buying Grouper records for a pretty long time,” Tweedy says of Liz Harris’s opaque experimental project. “There’s real growth from record to record, but she’s been able to maintain this mysterious atmosphere even as some things have become a little more unlocked and a little more accessible.”

“It’s the kind of record that I almost don’t want to know who’s responsible for it,” he laughs. “It’s not presented in a way that makes that a priority. It’s presented with a very limited exposure of identity. It could be a group of aliens that kidnapped a female singer, or any number of things.”

“I’m friends with Jim,” Tweedy says. “I love him so much. Even before I knew him, I was a pretty relentless pursuer of his different projects. I don’t know if there’s anyone on earth that can own all of [his experimental releases]. I think Bandcamp is a really liberating platform for Jim, and he’s able to rest assured that people will hear the music at a higher quality. There’s a musicality that I don’t find anywhere else outside of Jim’s music.”

“They’re incredible,” Tweedy says of the self-deprecating lo-fi Indiana punk band Liquids. “This is the first [record] of theirs I heard—it has the best application of that type of malaise [laughs]. It’s really uplifting to me to know that you can still create that energy and positivity in an odd way. There’s something positive to me about someone being able to liberate yourself. [Hot Liqs] was actually a recommendation from [Silver Jews frontman] David Berman. He was out in that neck of the woods and checking things out. When we worked briefly together on the very early stages of the Purple Mountains record, he hung out with me at the studio at the Loft. I’d known David for a long time. I was thinking about him when I made that pick.”

“He’s fucking fascinating,” says Tweedy. “He’s incredible. It’s hip-hop loosely related to a lot of other types of music [like experimental jazz and electro-pop]. He plays bass with [my son] Spencer. He’s a super great guy, and I love the record. It’s so fresh and exciting. I don’t believe that he won’t find a bigger audience for what he does. He can do it all, and he’s so amped.”

“It’s inspiring to me as a guitar player. I love listening to unpredictable guitar music, music that reminds me that there are infinite possibilities still. I’ve been listening to him for a long time. He was in Harry Pussy, they played at [my wife Sue Miller’s former club] Lounge Ax. It’s a perfect example of something that’s much easier to get a hold of on Bandcamp than other places.”

Tweedy discovered this double-album from the Stockholm-based organist Kali Malone while “skipping around the ambient and experimental section of Bandcamp and taking the pulse of a handful of records.”

“That one made its way into my listening habits,” he says. “I think she’s probably classically trained and has some connection to a world that’s separate from the one I inhabit—real music respectability. It’s fascinating stuff.”