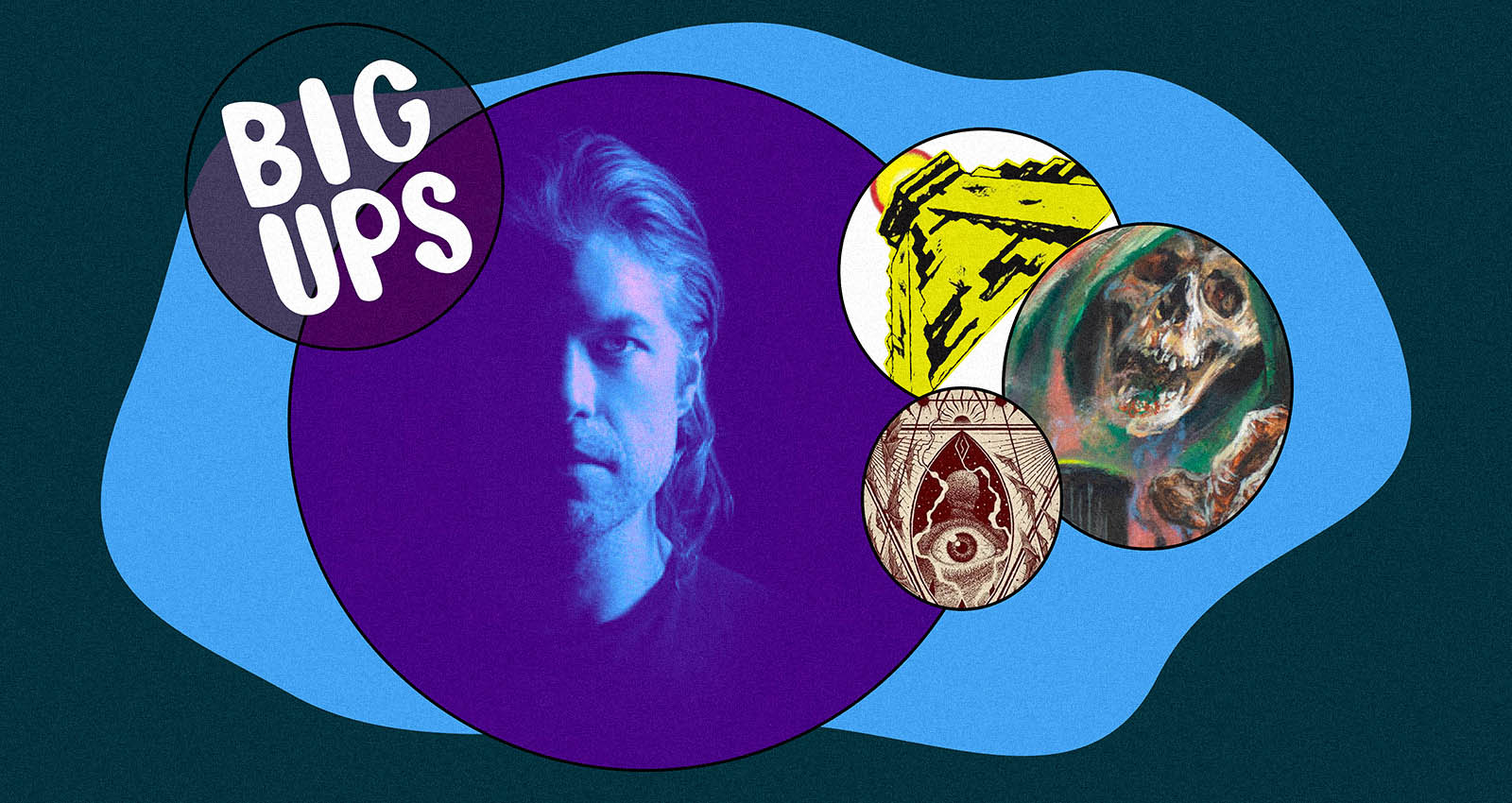 Emotions may be rawer in the immediate aftermath of tragedy, but with time often comes perspective and wisdom. Pallbearer’s debut album, Sorrow and Extinction, was released in 2012, shortly after the death of bassist, songwriter, and synth player Joseph D. Rowland’s mother, and the album’s decidedly mournful tone reflects that. The tone is somber, singer/guitarist Brett Campbell’s singing is soulfully wounded, and songs are given titles such as “An Offering of Grief” and “Given to the Grave.” For all of the set dressing, though, the album’s lyrics strive for opaque poetry rather than a gut-punch of detailed emotion. Despite being released over eight years later, the band’s new album, Forgotten Days, opts for the latter approach.

“It’s an intensely personal record, where we’re facing some subject matter that’s been gnawing at us throughout our entire career head-on this time,” says Rowland. “Last year was the 10th anniversary of when my mom passed away, and that’s been an unbelievably difficult subject for me to assess, just because of how quickly Pallbearer turned into something that was an all-consuming thing. [Sorrow and Extinction] dealt a lot with that, but it was written in a much more veiled way. This record is so much more open than we’ve ever been before. It’s been a very difficult subject to broach all these years, but given the distance and the fact that the memories continue to fade, it was time to take one last look at it before it completely dissipated into nothingness.”

Forgotten Days not only speaks to the persistent pang of personal loss, but also to the sort of memory loss Rowland describes. The Campbell-written title track, released as the lead single this summer, sets the tone for the album by meditating on physical decay, mortality, and dementia: “Is this insanity?/ Will they come to take me?/ Who can I trust with tomorrow?/ I can barely trust myself.” It’s much more lucid than we’ve come to expect from this generation’s most expressive doom band, and perhaps even more cathartic than their existing highest peaks.

For arguably the most popular modern band of their doom subgenre, Pallbearer have never been content to stay in their lane. The 2014 follow-up to their debut, Foundations of Burden, may have simply refined and dynamized their carefully-curated sound, but their third and fourth albums stray quite far afield. Their 2017 record Heartless incorporated a healthy dose of prog, allowing the band’s instrumental chops to share the spotlight with their plaintive songwriting, and now the pendulum has swung back into a more straightforward realm. Musically, Forgotten Days reflects the rawness of its lyrics, never opting for a zig-zag where a righteous wallop will suffice.

As always, Rowland’s synth wizardry provides a fitting atmosphere, and it’s even more pronounced this time around. “Typically, it hasn’t been something that’s extremely prominent in the songwriting, but it shows its face quite a bit more on Forgotten Days than it has in the past,” he says. He’s been an avid collector of vintage analog models for close to 20 years, and outside of his obvious metal and punk wheelhouse, it shows in his musical taste. “[Synth] stuff that sounds lush and slightly broken is definitely very appealing to me,” he says. “The whole cosmic synth genre is held in the highest esteem in my musical interests.”

“I wanted to push this because I know a lot of people really enjoyed the progressive side of Pallbearer’s previous record [Heartless] and Sumokem is another heavy band from Little Rock that also plays a style of music that’s pretty similar—a mash-up of a heavier, doomier sound with progressive rock—but this new record goes full-on into an incredible prog rock zone. It’s an astonishing record. Our newest record goes a little farther away from the prog rock sound, compared to our last one. This is not a discredit to Sumokem at all—they have their own amazing style—but if people want to hear more of the heavy prog sound that we had on our previous record, they’ve completely nailed that amalgam of those two things on this new record in a truly jaw-dropping way. I’d recommend it to anyone who likes soulful, heavy music with incredible vocals and instrumentation. We’ve known these guys for forever. Our guitarist Devin [Holt] has known Jacob [Sawrie, the band’s vocalist and songwriter] since they were in kindergarten together. There’s a long history of being buddies with these guys.”

“This is another, younger band from Little Rock. Holocene Extinction is their first full-length album, and it’s crushing. The first heavy music that I was really, really into when I was a kid was hardcore, so I still have a huge affinity for heavy hardcore, more metallic-leaning stuff. I just think Terminal Nation knocked it out of the park with Holocene Extinction. It has the most timely message of any record out right now. Considering that our world is literally falling apart in front of us, the political-leaning lyrics on the record are a knockout punch. One thing that’s interesting to me is that they take the powerviolence approach, where the songs are shorter than you want them to be. They’ll come in with the sickest fucking riff ever, but they’ll only play it like once. Like the song ‘Revenge,’ it has this unbelievably groovy riff that comes on at the end of the song, but they only play it for five seconds. You want it to keep going but they know how to snatch it away from you before you’re satisfied. I have a lot of respect for that approach, because it’d be easy to just ride out on the crunchy riffs for a while, but they like making you mad.”

“Some context about myself: I’m obsessed with anything cosmic synth-related, like Tangerine Dream, Heldon, etc. I’d say that my main musical interest lies in the realm of cosmic music and krautrock, Berlin school-style music, progressive synth, or whatever—I feel like there’s a million different genre tags people like to throw on there. This Majeure record originally came out over 10 years ago and it’s one of the best interpretations of that style of music that I’ve heard in a contemporary setting. The first track on there has one of the most satisfying melodies of any song I can think of. So hearing this reimagined version—there’s no new recording done—but hearing the completely revamped edition of it was cool. I’m excited that it’s being made re-available for people to listen to. Obviously, I’m a big fan of A.E. Paterra’s other project, Zombi, but his solo stuff is pretty fascinating. I think a lot of his releases are just exclusive on Bandcamp.”

“She does one of my favorite takes on a blend of darkwave and italo disco that’s out there right now. I’ve been very hopeful that she’ll release a new record sometime soon, but Sub Rosa is so good that even if that’s the only album she ever puts out, I think it’s a modern classic. The songwriting is impeccable, the production is very hazy and has a very menacing feel to it that I really love. I think a lot of artists try to pull off the pseudo-’80s lo-fi production and sometimes it feels a little forced, but this legitimately sounds like it’s directly from a VHS tape that you got at the last Blockbuster in the U.S., and you’re watching a romantic horror movie.”

“This is actually something that I had never heard of before. When I got asked to do this, I just decided to scroll around a little bit with the genre tags on Bandcamp and was kind of blown away. My favorite band of all-time is Popol Vuh, and this totally hits that same almost pan-religious feeling. There’s something very mystical-sounding about it. I don’t really know anything about the artist, there’s not even a particular release I would point anybody to, but if you like that vein of krautrock—I’m not even sure I would consider Popol Vuh to be krautrock—but also the band Gila that some of the Popol Vuh members were involved in, it totally is a wonderful take on that style, residing somewhere between kosmische musik and spiritual, vaguely Eastern-sounding stuff. I was kind of fascinated that all the albums seem to be like, their covers of other bands’ songs, but I was listening through a few of them like, ‘Well, if these are covers, they truly reimagined them in the most far-out way.’ It’s a really unusual project. I love Popol Vuh so much, and I’ve never really found a contemporary artist that was able to land on a lot of the points that I love about them. Knowing that there is someone out there doing music that emulates that feeling in a very genuine way, I’m excited to do some more exploring.”