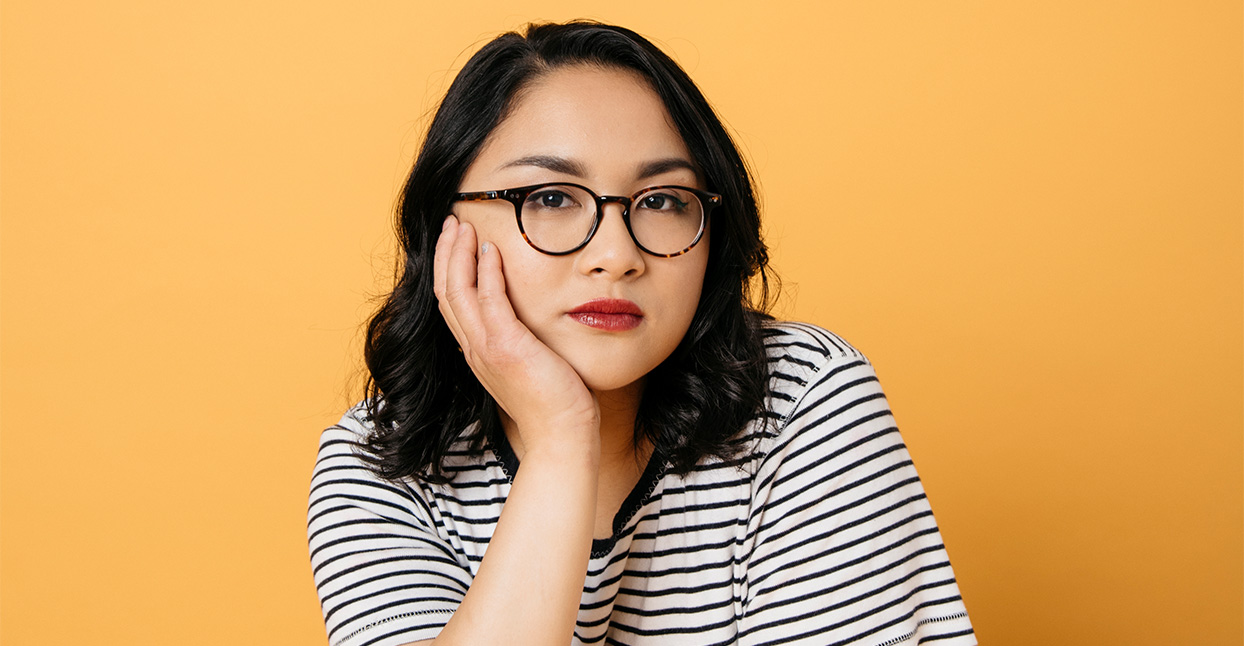 I first saw Melina Duterte perform under her moniker Jay Som back in July. At the time, she was out on tour with Mitski and Japanese Breakfast, and she took the stage alone for a subdued set. When she passed through Seattle again in September, it was to open for Peter Bjorn and John, backed by a full band. Duterte’s quick ascent is a strong indication of both her talent and her growing importance to the West Coast music scene.

As Jay Som, her music covers almost every romantic notion imaginable, from sweet vignettes of a new relationship to heartbreak at the end of one. Her songs explore so much about human vulnerability that they might inspire you to spill a few secrets. So when we had a chance to sit down at Little Oddfellows, it was only a matter of time before we were trading embarrassing facts back and forth. Hers? “I’ve been listening to a lot of bad EDM lately. It’s so bad. You can put that in.” I told her I’m too chicken to perform karaoke by myself. She encouraged me to get over my phobia—“You have to do it at least once! I hope it will be soon. That is the gate that will open, you will realize it is so fun and you will start jumping on tables.”

She is passionate, and very insistent, that the Bay Area music scene is not dead, despite recent articles to the contrary. “All of those articles are bullshit,” she says. “In the amount of time it takes to write that article, [the reporter] could have searched for four Bay Area bands. It’s that easy. Just blindly saying that the Bay Area music scene is dead is rude to the people that are still working hard to keep the music scene alive. I do understand, obviously, that the rent prices are especially high, so it is hard to be a musician. But it’s hard to be a musician anywhere. Artists like Ty Segall and Thee Oh Sees, they all left to go to LA, but no one ever felt like there wasn’t a scene anymore.” She intends to keep championing her city’s music culture with the release of her Polyvinyl debut in 2017.

Given that she’s been posting her music to Bandcamp since 2012, I asked her to pass along a few recommendations.

[Songwriter Ellis Jones] is from England, and he does all home recordings. It’s a very unique style of alternative pop, and he has a really cool voice as well. It’s a strange record. It’s like the song writing of Yo La Tengo. It’s hard to digest at first, in terms of lyrics and the instrumentation he uses, but underneath it all, it’s just really good pop music. He has a song on there called “Cut Me Out.” I think that’s one of the best songs I’ve heard in a long time.

[Ryan Thomas Schmale] is also from the Bay Area, and this is his solo project. He’s been recording music since he was 17 or something. He does all bedroom recordings, too. This EP, in general, is one of my favorites because he definitely has a way with setting the mood. The combination of lyrics and the arrangements of the tracks—I don’t know what else to say besides they’re sad. (I hope that’s not offensive to him.) He’s very talented, he has a ton of songs. He’s this young guy who kind of reminds me of Elliot Smith.

They’re from Philadelphia. My friend [Eva Treadway] from the band Plush introduced me to them. They recently signed to Father/Daughter Records, and all of them are in high school. I think the lead singer just graduated, which is so weird to me because the lyrics are so mature. The way that that [singer Ava Trilling] expresses her experiences are so huge within themselves. Because, you know, young people know what love is, too. It’s very impressive that she can connect to a listener that way. Her voice is very captivating, it sounds like it’s just always on the point of breaking. Crying, kind of.

My friend Dylan, who plays bass in my live show, showed me this record. We were all sitting down, I had a beer in my hand so I was a little relaxed, and Dylan put on a track. Instantly, within the first ten seconds, I was like, “What is this?” And I made him repeat it three times. When I hear a song I really like, I have to play it over and over again until I get tired of it. I think I listen to songs from albums more than I listen to albums fully. Anyway, they’re from Edmonton; they’re a Canadian band. [Singer Jessica Jalbert] has been around in the Canadian music scene for a really long time, she has this gorgeous voice—a super angelic voice. This is a home-recorded album that she did with [Renny Wilson], and it’s very funky. I love all the songs, very nice guitars, and her voice is so careful. It’s very good headphone music, I’d say.

This last one is my friend. He released an album that he made by himself. He’s a very sweet guy that plays bass in another band in the Bay Area called Never Young, but for this one he did all the instruments—drums, bass, guitar—by himself. What I really liked about this album is his voice. That’s the standout for me. He has this gritty, whiny voice that’s really tasteful. I think the whole vibe of the album is… I don’t want to say lo-fi, because lo-fi has this weird connotation that it’s bad music, or indie-pop, but it’s just very good alternative guitar music. We’ve played shows together a couple of times. Our friends all know each other, we listen to each others’ music. There’s a certain respect there.