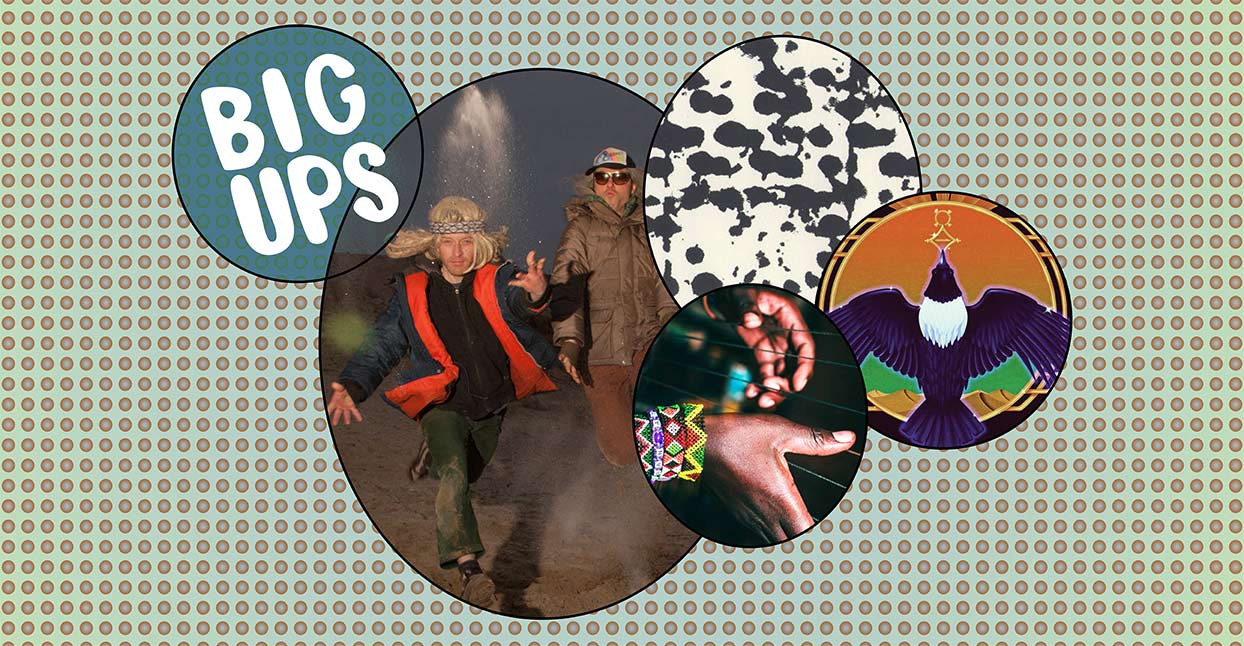 Brian Chippendale can’t stop buying his son Matchbox cars. The Providence, RI drummer, who was dubbed by Rolling Stone as one of the greatest drummers of all time in 2016, is one-half of the enigmatic noise-rock band Lightning Bolt. For 25 years, he’s been known as the guy who pounds unrelentingly on his kit while caterwauling into a distorted contact microphone that’s strapped to his face with a homemade mask. Though not particularly dark or self-serious, Lightning Bolt are one of the most ferocious bands of the last quarter-century, and their seventh album Sonic Citadel is, for the most part, another helping of their reliably gear-grinding rhythmic havoc.

Save for one of its lead singles, “Hüsker Dön’t,” their most immediately tuneful song to date. Chippendale says people are crediting the melodic direction of that track—which is only melodic by noise rock standards—to his three-year-old son; implying that his giddiness from becoming a father translated into a brighter, poppier Lightning Bolt. Although Chippendale admits that fatherhood is the biggest thing to happen to him since the band’s 2015 album Fantasy Empire, he says the melodic elements came from elsewhere.

“It’s kind of the curse of pop music,” Chippendale says, speaking from his studio in Providence. “You write this pop song and you’re like, ‘Oh, fuck I wrote a pop song.’ I don’t wanna be that kind of band but you’re like, ‘Oh, but it’s a good pop song.’”

In the past, he and bandmate Brian Gibson (bass) would have cast a song like “Hüsker Dön’t” aside, considering it “too straight.” Or, it would’ve just naturally become more wonky over time. “Had we toured that song for a year, it probably would’ve been way too fast, because everything becomes faster [when you play it live],” he says. “We probably would have added some complicated stuff to it… Because we get bored with stuff, so we start to change them around. It’s fun to get carried away.”

The only real impact being a new father had on the band, Chippendale says, was in time management. “The hardest thing about making this new record was limited time and limited resources. Now, I go to the studio and I have to pay for the studio and I have to pay for a babysitter,” he says. Since they had to shift their practice schedules around, the duo were playing together less and writing more on their own—a new experience for them. Therefore, when it came time to enter the studio they weren’t as overly prepared as they usually are, which meant more post-production; vocal re-do’s, overdubs, and chopping up vocal takes in an unnatural way.

“So, lots of cheating,” Chippendale says. “Which is a joke, because you’re recording. It’s not cheating, you’re just recording. But I used to be very adamant about, ‘This is a document of what we do.’ And now it’s just kind of like, ‘Ah, I don’t care I just want to make something that I want to listen to.’”

We asked Chippendale to share his favorite discoveries from a recent Bandcamp deep dive. From psychedelic African string music to distorted techno to free-jazz drumming, the following releases reveal a great deal about Chippendale’s forward-thinking tastes.

“It’s electronic, sort of techno, but real distorted, and sort of fierce and simple in a way that doesn’t use a lot of the techno sounds. He’s got his own synthesized, heavy oscillator: like old Pan Sonic, but with a little more liveliness. He’s great. He was in a band years ago and he was the drummer. And that’s another thing; Jeremy Harris of Lazy Magnet is a drummer, Wren from Container used to be a drummer. I think I’m always drawn to these people who were drummers at some point. Because Container hits really hard, it’s cool.”

“Dagoretti Records is this guy Pete Larson, who used to [run] Bulb Records, and he was in this awesome band called 25 Suaves. He’s a guitar dude from Michigan, and he’s really interesting because I think he taught high school and his students were in this band Nautical Almanac. He spent some time in Africa, and now he’s back with Dagoretti Records, and it’s kind of like a world music, African music record label.

The one that I liked the most is this 7” called Grandmaster Masese. It’s this guy playing some kind of guitar thing. The sound of this guitar thing is so sick. There’s three songs and it’s like this sharp, crystalized, distorted awesomeness. It’s so good, I think it’s my favorite thing of everything I heard.”

“I was in Japan, and my friend who’s a super record collector played me this thing, Voices by Kink Gong…It almost sounds like a field recording, but it just goes into weird places. It does exactly what I want that stuff to do, it kind of just warps in this cool way that makes it really interesting. It’s real atmospheric, but it starts out with this amazing droney singing, maybe by women? I’m not sure. There’s women on the cover, so I’m probably just connecting the dots. It’s just so gorgeous, I listen to it over and over again. And now, I ordered the vinyl off of Bandcamp.”

“There’s a Providence guy named Jeremy Harris, who goes by Lazy Magnet. He’s all over the place, so he has two new records out in 2019 on Bandcamp. There’s one called Tide, which is heavy shoegaze. And he’s kind of a master, and he’s really under-the-radar, I think. Maybe he’s gotten more notoriety, but I he swivels so fast. Any time something might start to take shape for him in terms of a musical career he’s like, “Oh, so I’ll start making techno now.” And this other brand new record, L’Aube, is a techno record that he made. Tide is the one that I was really gravitating towards, because it had a little bit more of his personality in it.”

“There’s this guy Chris Corsano, who’s a free-jazz drummer from Western Massachusetts. There’s this whole Western Mass scene; Sonic Youth used to live out there—at least Thurston and Kim [did]—and it was amazing. You’d play, like, a basement show, and there’d be all these whacked-out Western Mass weirdos, but Kim Gordon and Thurston [Moore] would be there, too.

There’s a record that came out called Libra Rising and it’s a trio; it’s cello, drums, and drums. And it’s definitely a document. There’s no studio trickery. But Chris Corsano is just a real furious player, and Okkyung Lee can make some amazing, real weird sounds on the cello. So it’s a real inspiring performance of really out-there free jazz.”

“It’s contemporary Saharan music; I saw his trio play,  and it’s super sick. He’s a great guitarist. It’s really poppy and it’s cool. It’s really fun, beautiful playing. The lyrics are not in English so I’m listening to them as an instrument, for better or worse I’m not, obviously, getting the full picture. But it’s really gorgeous stuff. “

“I saw Moor Mother once, singing in this weird free-jazz fusion quartet. I didn’t know anything about her, and that was the first thing I saw, and it just blew my mind. Like, holy shit, that voice. From delicate to annihilation in 60 seconds. And then just the weight, lyrically. Like, you kind of can’t even listen to it casually. It’s heavy shit, it’s so heavy. It’s like, ‘Oh my God, am I allowed to just sit back and listen to this casually and walk away? Or do I have to delve into this?’ But it’s so good, and so worth listening to.”

“There’s a label called No Rent that’s a Philly tape label, and they have a [Bandcamp] page with a bunch of different stuff. But Noise Nomads is on there, and he has a tape called Palpable Menace and—I guess, what Container is to techno, Noise Nomads is to noise stuff. I don’t want to call it bass, but it’s kind of primal and it’s physical. It’s like you can see the guy smashing the fucking box. He’s considering the sound for sure, but you can sort of see there’s this—it’s just real primal, I can’t explain it too well.”

“I saw that you had [John] Dwyer [Oh Sees, Castle Face Records] on [Big Ups] so I thought, ‘Alright, I’ll put Face Stabber on.’ I’ll try and get normal for a second. He’s an old friend. Somewhere in the studio, I have a tape of me and him jamming from, like, 1998 but I don’t know where the hell it is. We were talking over the summer, we’d share each other’s new albums before they were out to be like, ‘Where you at?’ And I heard his and I was like, ‘Oh man, this is so good.’  I was like, ‘Ours is so goddamn stiff.’ His new stuff is just so loose. It’s just a great record. It kind of goes all over the place and it’s long but it’s just killer — just a good psych record. Gets you into the psych zone.”