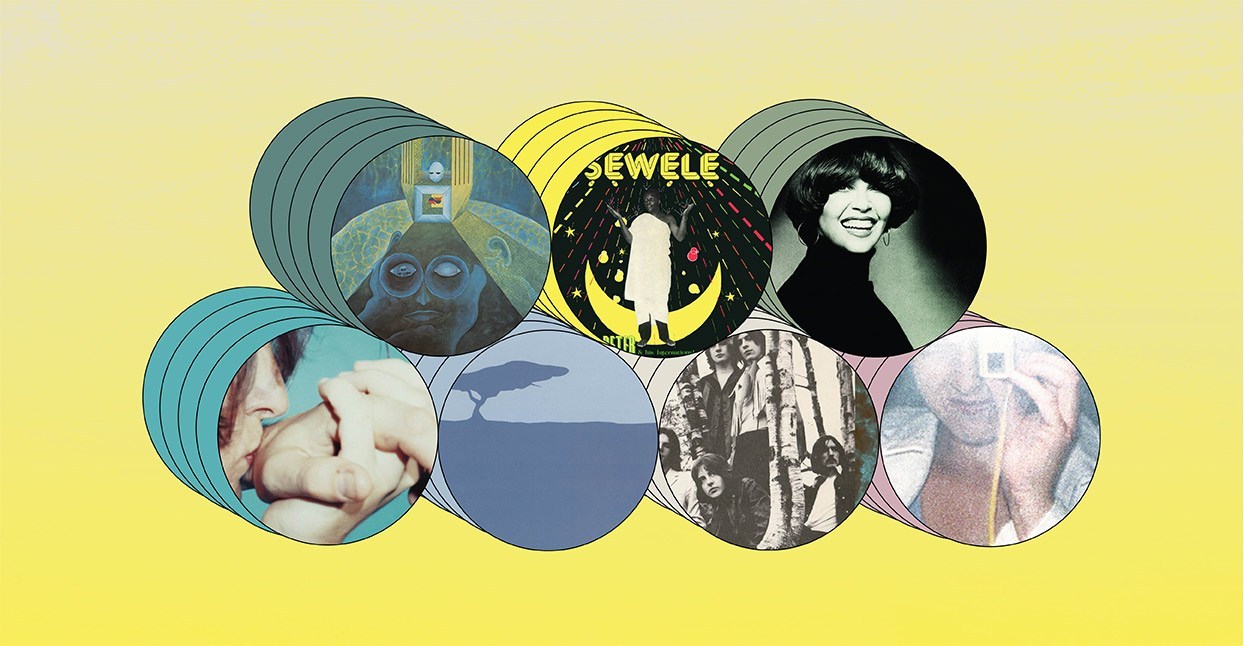 Each month, we pick out some of the most crucial reissues and retrospectives dropped recently on Bandcamp, and look at the historic tales behind them. Whether it’s West African highlife, German post-punk, golden age hip-hop, or California neo-psychedelia, we’re here to lay out the best new oldies released from last December to now.

A rarity from 1978, Dominique Guiot’s L’Univers De La Mer is a collection of electronic instrumentals that seemed to predict MS-DOS video game scores, while evoking the kind of creepy orchestral ambience of Thom Yorke’s recent Suspiria soundtrack. Take “La Danse Des Méduses”: the light blips are dinky enough to score an old point-and-click adventure, but punctuated with blood-curdling strings that could slide into any modern sci-fi horror movie. There’s plenty of other left-field influences, as well; “Une Ballade Pour Une Goélette” has some “ye olde English” vibes to it, while the rubbery bassline of “Les Pingouins S’Amusent” draws some funky flutters from Guiot’s vintage synthesizers.

En Hollande showcases Sourakata Koité as a master of the kora, a long-necked harp lute used extensively in West African music. Recorded near Delft, Holland in 1984 with two Neumann mics in an old converted chicken coop, the Senegalese griot—that is, a member of a class of traveling poets, musicians, and storytellers who act as oral historians in parts of West Africa—wrangles the instrument for all its worth. Koité deftly builds his long-winding solos through this collection of traditional standards (“Kaira,” “Djonol”) and self-penned compositions (“N’na,” “Dioula”), complemented by his sturdy, traditional vocals. Of the many reissues to come out of Africa, en Hollande highlights a distinct sonic corner that can’t be ignored.

Given that Mandrake Paddle Steamer’s name sounds like it came from an online prog rock name generator, nobody will be surprised that we are dealing with classic psychedelic sounds here. The band was formed in London in 1967 by a group of college students who, judging by Pandemonium Shadow Show—a set of proggy wig-outs caked in rust, fashioned between 1968 and 1970—spent a lot of nights spinning The Doors and Syd Barrett-era Pink Floyd records. To wit, it’s derivative stuff—not so much a saucerful of secrets as a ceramic bowl of then-fashionable styles—but the British whimsy informing these acid-laced adds an uncanny element that separates it from the pack. Cartoonish voices contort lyrics that could be snatched from an old storybook; I swear a guitar line on “The World Whistles By” mirrors the theme from Roobarb and Custard despite the cartoon not debuting until 1974. A long, strange trip indeed.

Jaye P. Morgan’s transformation from a popular music performer and television star of the fabulous ’50s, to the funky R&B deity on her self-titled 1976 album, was a creative renaissance every bit as dramatic as Dylan plugging in. The one-time singer of big band ballads appeared like a phoenix strutting out of a white-hot bonfire, newly reborn in Sound City Studios in Los Angeles. Teaming with some of the city’s greatest session musicians—not to mention a then-unknown producer named David Foster, who’d go on to count Madonna and Whitney Houston among his clients—the record encapsulates the sophisticated 1970s L.A. pop style. Take the smooth funk of “Can’t Hide Love,” which benefits from Morgan’s smoky, unruly vocal performance. Yet when the album dropped in 1976, it quickly disappeared into the dust. Now, this lost classic has finally been pulled out of time, filling in a gap in the careers of Morgan, Foster, and the L.A. sound.

First released during the final flickers of the decade, Medium Crash will definitely resonate with those yearning for the halcyon days of 1990s alternative rock. French artist Perio tinkers with several divergent sounds that defined the various alt scenes that we all love and miss. His sparse arrangements run with shades of Fugazi’s irregular structures, The Brian Jonestown Massacre’s swirling psychedelica, and the bare-bones twee indie of Beat Happening. It adds up to a record that’s as blurry as waking up on the sofa with your crappy television stuck on ‘90s MTV.

The soft strumming and distant percussion of “The Shore” evoke memories of Cat Power’s twilit Moon Pix. Pop song “Enemies for Life”—featuring a soft but attitude-laden vocal from a sadly anonymous female singer who appears throughout the album—is equally skeletal-sounding. The ensuing “No Western Land Fits Your Passion” goes even further back in time, nodding the slow-hand, bluesy guitar licks of David Gilmour on Pink Floyd’s The Dark Side of the Moon. Not content to disappear into his influences, Perio’s own accented vocal bears his offbeat personality on more whimsical pieces like “Billboard (2)” and “Golden Burrito.” Inversely, the strummed chords of “Birthday Cake,” which sits on the record’s mostly acoustic second half, score a crushing tale of emptiness and loss.

Perio is still doing his thing—he just released a record last year, in fact. And now we have Medium Crash, which celebrates its 20th anniversary with a reissue that includes seven bonus tracks, making this a lush, definitive edition of a record that did absolutely nothing when first released but, as a vintage work pulled from history, is a gripping artifact of a bygone time.

Sir Shina Peters certainly earned the honorary knighthood he presumably bestowed on himself: the man born Oluwashina Akanbi Peters in Ogun State, southwestern Nigeria, did more to promote juju music, a style with roots in traditional Yoruba percussion, than just about anyone in his era. Peters credits 1986’s Sewele as carrying particular significance to his musical development, making it an important precursor to the Afro-juju sound he pioneered three years later, on his breakthrough album Ace: Afro Juju Series 1. As with most of Peters’s work, the arrangements throughout this record feel funky and organic: consider the title track, built on gently rapped bongos and rhythmic guitar licks, and or snaking percussion of the equally minimalist “Agbe’ere De.” Best of all are the down ‘n’ dirty organ chords and groovy guitar licks of “Yabis,” which previously kick-started the excellent 2008 compilation Nigeria 70 – Lagos Jump.

Manos was first released on Sub Pop back in 1993, during a golden era for the label following the rise of alternative rock. The Spinanes’ debut became the first independently released album to top the college radio charts. Today, it represents a paradigm of the core principles of that movement, as well as a reminder of its significance. Favoring an austere sound, singer/guitarist Rebecca Gates and drummer Scott Plouf waste no motions on their tightly packed arrangements. Opener “Entire” is a simple tune built around some acoustic strums and Gates’s tender vocals, while songs like “Noel, Jonah, and Me” and “Manos” are melodic as they are minimalist, with the pair wrangling everything they can from the slight instrumentation.