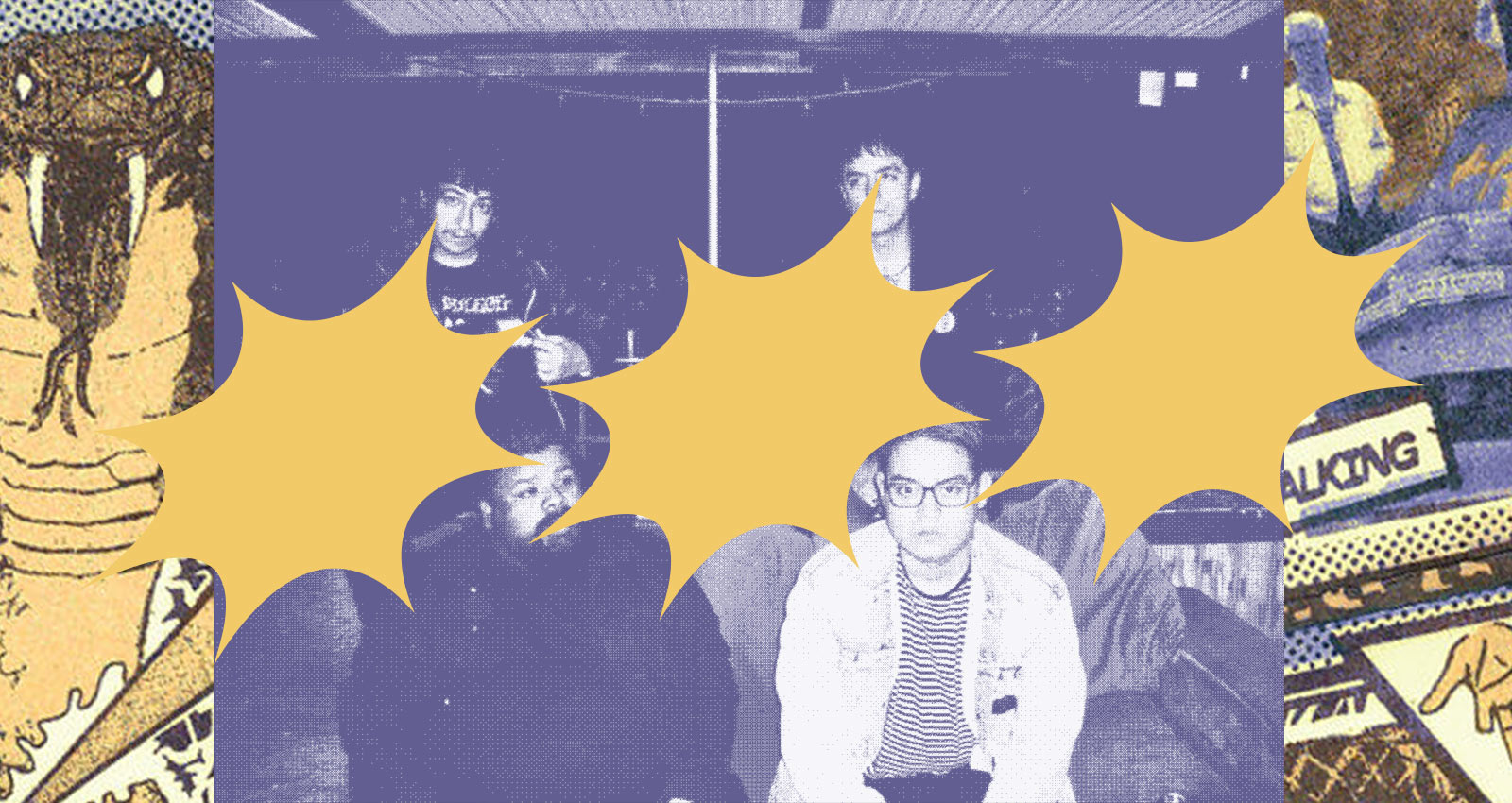 Bandcamp has long been a home for DIY punk and hardcore from around the world, touching all of the myriad subgenre styles and helping to translate the simple effectiveness of cut-and-paste to the digital age. For February’s edition of the best punk releases on Bandcamp, Kerry Cardoza features the nervy punk of Germany’s Lafff Box, a reissue from the legendary Rudimentary Peni, the gothic post-punk of Iceland’s Börn, and much more!

Guitars reign supreme on this short, punchy EP from Germany’s Lafff Box. Dual guitarists sometimes seem to be battling one another for the spotlight—one might play a nervy riff while the other squeals on the upper frets. Upbeat opener “Master” has over-the-top glam riffs, the vocals chaotic and distorted with effects. Each instrument is played aggressively, wielded like weapons of sound. “Weird Punch” is a bit more urgent, thick with buzzy tension. The closing track “We Hear You Talking” is the showstopper here. A heavy breakdown gives way to a sudden increase in volume, the vocals almost unintelligible with distortion, the guitars playing a thick rock lick.

This Brooklyn-based quartet of Puerto Rican punks plays aggressive, straightforward punk “from an immigrant perspective.” The message may be more important than the medium here, as the band shouts about what it’s like for a country to be used as a guinea pig by the United States and about everyday injustices like inequality of opportunity. The vocals are heavy with reverb, shouted at full velocity, and packed with feeling, as on the caustic “Mi Casa No Es Su Casa.” The drums have a clear, full-bodied sound, driving the melody ever forward, like on the gloomy “La Milagrosa.” Closer “Selección Natural” is the heaviest offering, with a sinister guitar riff and foreboding drums.

The debut release from this British Columbia four-piece is expertly composed post-punk, filled with lush guitar harmonics and earnestly howled lyrics. The effort is all the more impressive since this band formed just before the pandemic lockdown. The phaser-filled opening track is melodic dark punk, the heavy bassline providing a counterpoint to the upbeat drumming. Vocalist Grant Minor has mastered the matter-of-fact delivery expected in post-punk, sometimes slipping into spoken word or emotional shouts. “Sacred Light” is slower but catchy nonetheless, with a standout bassline that could be cribbed from New Order.

“Five Hundred to One” is perhaps the strongest, moody and melodic, with a Killing Joke-style outro.

The Drin
Engines Sing for the Pale Moon

Another debut, this one from a new group based in Cincinnati, Ohio, fronted by the drummer of Vacation. Its most fitting descriptor might be experimental proto-punk. Still, in all honesty, it blends many elements and genres—from the funky dub feel of “Full Moon Natural Sickos” to the early punk vibe of “(I’m Only) 75” to the dreamy folkiness of tracks like “The Creek at Sundown.” There isn’t a lot in the way of straightforward melody here, though the album really shines in those moments, as on the synthy, upbeat “For the Tsarina.” It’s the sort of album where you can hear something new upon each listen; I encourage trying to decipher the sounds for yourself.

Following up 2021’s killer full-length, this tight EP brings together two new songs and three previously released tracks. The Los Angeles quartet has boosted the sound quality on this record, making the new version of “Cemento” sound almost like a different track entirely. Here the vocals are laid low, made nearly impossible to parse, the guitar is higher, its spare, high-pitched notes increasing the tension of the melody. Mostly these tracks are gloom-filled, but with a tempo made for dancing, enhanced by the industrial beats and electronic-sounding drums. The title track hits the hardest; staccato drumbeats punctuate the sound, and the vocals come through distorted and despondent. The energy is undeniably magnetic.

La Vida Es Un Mus and Sealed Records have joined forces to reissue the early works of foundational punk trio Rudimentary Peni. This, the band’s first 12-song 7-inch, follows a late 2021 reissue of the group’s unhinged debut LP Death Church. The indisputably pogo-able tracks here have all the hallmarks of classic peace-punk: political lyrics written in impressionistic fragments, unfiltered instrumentation, and attitude in spades. Remastered from the original tapes, the sound quality is excellent; Grant Matthews and Jon Greville masterfully set the pace, while Nick Blinko skewers everything from the U.S.’s pitiful political process to the everyday world. The record culminates in the unstoppable “Play,” a tongue-in-cheek call to arms for the music-minded, ending with a gag.

Long-running Icelandic four-piece Börn returns with their first new music since 2015’s self-titled EP. This LP delivers more sweeping dark punk, filled with trebly guitar and dramatically-delivered vocals. Featuring members of hardcore heavyweights Dauðyflin, as well as Tentacles of Doom and Ofvitarnir, Börn is on the more gothic side, penning lyrics about the pitfalls of identity, U.S. imperialism, and police violence. Lead singer Alexandra has a powerful voice, at times screaming the words, as on “Norn,” at other times singing in an otherworldly tone recalling Nina Hagen, as on “Þú hvíslar.” The final two tracks are the most intense. On “Þú skuldar mér að vera sexý” the vocals are breathless over screeching guitar, and on “Böðull” Alexandra sounds almost pained, leaving an uneasy feeling in the air once the music stops.