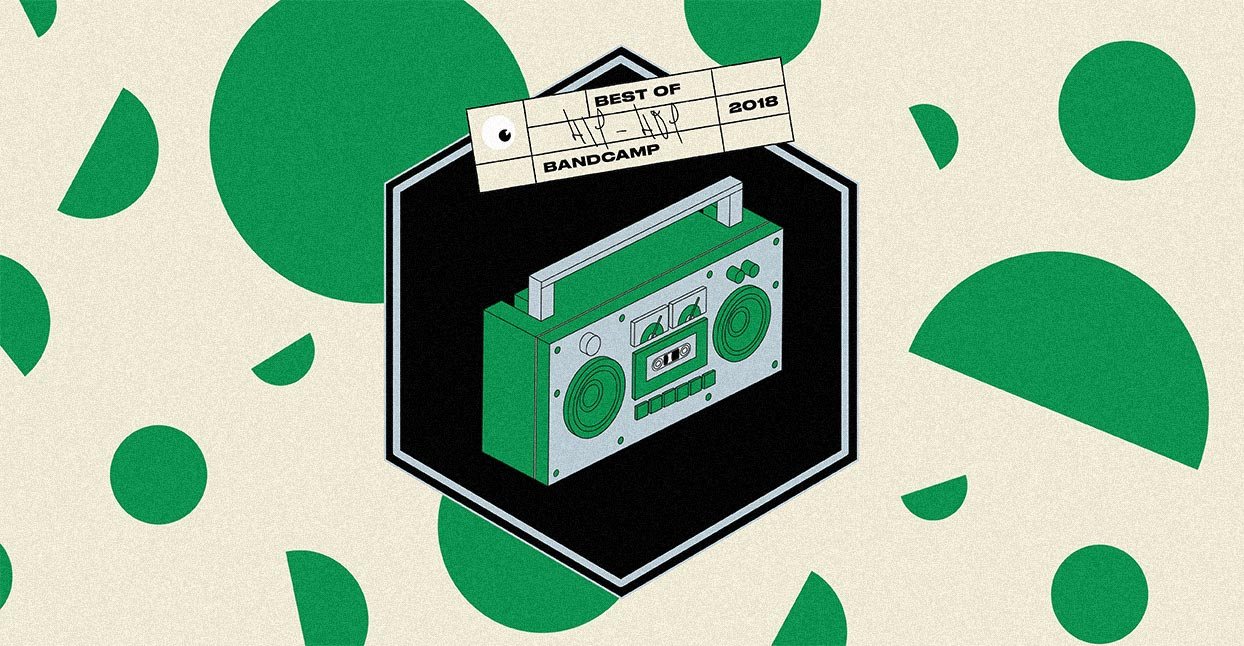 As 2018 comes to a close, it’s time to cast a critical eye back over the vast vault of hip-hop that hit Bandcamp this year. Whether defiantly boom bap or wildly experimental, politicized or poetical, these are the 10 best rap albums of 2018 (presented alphabetically).

Venturing through Paraffin is a head-spinning experience. Across 15 tracks, Brooklyn’s billy woods and ELUCID let fly densely packed verses designed to spotlight and disrupt structural inequalities in society. “I was surprised to find people rather die than cut you a slice of the pie,” laments woods on “Root Farm,” while “ECOMOG” features ELUCID rapping, “To be seen and not seen at the same time is a mind fuck.” This lyrical assault, which balances woods’s declarative lines and sardonic streak with his rhyme partner’s labyrinthian flows, takes place over some of the most progressive hip-hop production of the year. ELUCID’s beat for “Rehearse With Ornette” combines disorienting high-end dissonance with clattering snares, Small Pro’s “Dettol” is a lesson in bittersweet minimalism, and the heavy-duty drums August Fanon hooks up for “If He Holla” threaten to puncture the track. Paraffin is truly heavy mental hip-hop music.

Beans cemented his reputation as part of the lyrically progressive Antipop Consortium, but Nibiru Tut brings to mind Chuck D’s lyric from “Don’t Believe The Hype”: “I don’t rhyme for the sake of riddling.” Beans’s flow still possesses a captivating finesse as he rhymes over shapeshifting electronic production handled by Ay Fast, but there’s a bluntness and brute force about the delivery that transforms Nibiru Tut into slamming political reportage. “The party in power doesn’t give a shit about the poor,” Beans vents on opening track “GETDA$$$$$,” which spirals into a furious recap of the year’s political fuckery. Just as powerful, “Midnight” pinpoints the links between white supremacy and police brutality over a beat imbued with extra bass courtesy of Living Colour’s Doug Wimbish. Don’t think hip-hop gets a pass, either: Closing cut “Running Eagle Go Far” positions Beans as coming “from the era when hip-hop held a mirror to America,” as he rages at the way much of the culture has willingly given up its political bite.

World-building isn’t an easy trick to pull off—but the New York duo of EP and Matter Ov Fact have created a vivid rap universe where they perform in full-length black cloaks to an army of fans dubbed the Shark Nation. AAAAGGGHH keeps faith with the Dopp Gang‘s time-tested lyrical, referencing kooky sexual proclivities and a smorgasbord of food while saluting those living on the margins of society. This time, the production takes a cue from mid-’90s Dr. Dre deep cuts: “Mootah Feekah” attacks with forbidding piano stabs and sinewy high-pitched synths; “All Tha Fun” is bedded by squelching bass tones and guest Thonio’s G-funk-style hook; and “Screen Fatigue” offers smart commentary about addictive phone culture over a sleazy groove. The album is capped by the reflective “Highly Favored,” which resonates as both a prayer to the rap gods up above and encouragement to always do the right thing. As Matter Ov Fact puts it, “You gots to live your life before they reminisce on ya.”

Sadhugold has been steadily pumping out some of the most creative hip-hop beats of the year—and the Philadelphia producer’s collaboration with Dominican spitter Estee Nack from the Tragic Allies crew is prime heavyweight underground rap. Nack’s lyrics bring to mind the soulful crime parables Raekwon and Ghostface perfected during the mid ’90s. On the exuberant opener “El Blablazo,” Nack updates the “cash rules” mentality: “Trump administration keep this shit out of order / Snatched my nephew up while jumping over the border / For sure then my niggas been deported a couple times / They came back and made the same mistake ’cause they love the grind.” But it’s Sadhugold’s experimental instincts that elevate SURFINONGOLD.WAV into “essential” territory, crafting beats from a drum-free melange of violent bass stabs and free jazz touches (“BULLYBANDERAS”) and embracing sinister ‘70s spy soundtrack vibes (“SPOOKWHOSATBYTHEDOOR”). Channeling the spirit of the album’s title, triumphant final track “GRANDIOS(E)” twists psych rock samples around Nack’s gnarly voice as the rapper ad libs, “Glimmers and gleams is coming from all directions.”

Weather Or Not is an alluringly cold record. The album’s greyscale cover features a lonesome Evidence walking by a shuttered corner store in Venice’s Sidewalk Market. The vibe of the image is mirrored by the project’s production, with beats by The Alchemist, Nottz, and DJ Premier sticking to a formula of brawny, mid-tempo boom bap rhythms that pair perfectly with Ev’s patented stoney slow flow. Prompted by sampled weather reports warning heavy rain, snow storms, and destructive winds, Evidence raps from a melancholy state of mind. Alchemist’s piano-laced beat for “Love Is A Funny Thing” inspires musings on fake friends (and includes on-topic guest verses from Styles P and Rapsody), while Nottz’s brooding “Jim Dean” beat has Ev navigating “dreams broken on the boulevard.” At heart, Weather Or Not is evocative hip-hop mood music, beats and rhymes working in unison to convey Evidence’s preference for “staring at the sun, but I’m wishing that the rain fall.”

Jean Grae and Quelle Chris’s creative tour de force opens with a game show skit where “everything’s fine” is the answer to every question. This idea of insisting things are OK when so much of the world around us is fraying and falling apart inspires one of the smartest and most prescient albums of the year. The 15 self-produced tracks are a kaleidoscope of concepts, flows, and commentary, putting Everything’s Fine squarely in the lineage of albums like De La Soul Is Dead and Masta Ace’s Slaughtahouse, employing layers of irony and satire to make serious points. “My Contribution To This Scam” is an animated critique on what parts of the modern hip-hop scene have become, “Breakfast Of Champions” is an emotionally-charged account of living in a world where police brutality is a daily occurrence, and “Gold Purple Orange” spotlights stereotypes over deep, bass-powered production. Crucially, the album ends with the emotionally haunting “River,” where the MCs write open letters to family members in such earnest fashion that it causes the listener to take stock of what’s really important in their own world while also challenging them to right what’s wrong.

Pieces Of A Man

While writing Pieces Of A Man, Mick Jenkins came across a recording of fellow Chicago artist Gil Scott-Heron’s 1978 track “The Ghetto Code” and was struck by the way the bohemian poet managed to entertain and educate at the same time. It’s a balancing act Jenkins executes across his own album, which is shot through with jazzy production and includes beats from Kaytranada, Black Milk, and BadBadNotGood. On the slinky “Reginald,” the MC addresses those who fail to look beyond first impressions as he smoothly explains, “You basing everything you know about me from moments / I’m more a compilation of composition—it’s complicated / I’ve contemplated so many perspectives.” This idea of viewing life and people from fresh points of view emerges as key to the listening session: “Consensual Seduction” smartly drafts in Corinne Bailey Rae to trill a counterpoint verse about sexual consent, while the thick, bluesy organ lines bedding “Ghost” inspire Jenkins to shun the trappings of the public rap life for the benefit of his personal relationships and his sanity.

After hearing people describe the music on her 2016 Telefone mixtape as “soft,” Noname took to Twitter to defiantly declare that she makes “lullaby rap music.” The Chicago rapper and poet’s debut album, Room 25, makes good on the concept—it’s an exquisite listen. Co-executive produced by Phoelix, the beats are pillowy, a mix of clipped drums, muted keys, and lush swaths of strings that act as a gentle cushion for Noname’s tranquil, conversational flow. There’s a free-association feel to her patter as she glides over the tracks. At times, she opens up and writes personal rap confessionals about relationships and inner doubts (“Window,” “Don’t Forget About Me”). Elsewhere, she tackles loftier issues like gentrification and the links between destructive violence and masculinity on “Prayer Song,” where she quips, “Why oh why my dick getting bigger? / This violence turn me on, me on.” As the final piano notes of the album fade out, Room 25 shows there’s much power in killing ‘em softly.

2018 shaped up to be a banner year for milo. The feted art rap wordsmith dropped a new lo-fi Scallops Hotel project on January 1, opened the Soulfolks record store in Biddeford, Maine during the summer, and released the jazz-inspired budding ornithologists are weary of tired analogies in September (an album he’s said will be the last produced under the milo name). But it’s milo’s team-up with ELUCID as Nostrum Grocers that teased out a new emotional edge and, at times, visceral anger in his music. The songs that make up Nostrum Grocers’ self-titled debut were inspired by real-world conversations between the two MCs, and the skillfully crafted lyrics brim with references to counterculture history, quote Sun Ra, and nod to Ishmael Reed’s Neo-HooDoo manifesto. On the jittery, fuzz-studded “walter hudson,” they both take turns to rap what’s become a steely Nostrum Grocers call to arms: “The best fertilizer is the plantation owner’s foot.”

No News Is Good News

On his second solo studio album, Phonte throws off the standard MC invincibility cloak and gets vulnerable. Soulful production that layers melancholy synths with mid-tempo drums complements Phontigallo’s mature and spiritual line of songwriting. He mourns departed parents and lost fatherhood (“Cry No More”), wonders what his legacy will be (“Such Is Life”), and ruminates on relationships and marriage (“Change Of Mind,” with Freddie Gibbs, and “Sweet You”). A sampled news snippet about the tragically early deaths of Prodigy, Phife, and Combat Jack prompts the self-care theme of “Expensive Genes,” which includes the midlife commentary, “Our biggest fears were shots or armed robbery / Now the biggest fears are clots and oncology.” From all this soul-searching comes an appreciation of what really matters in life. “I know my lane, I know the ledge, I know the role,” Phonte raps on the redemptive “Find That Love Again,” before signing off sagely: “That other bullshit’s kinda low on the totem pole.”