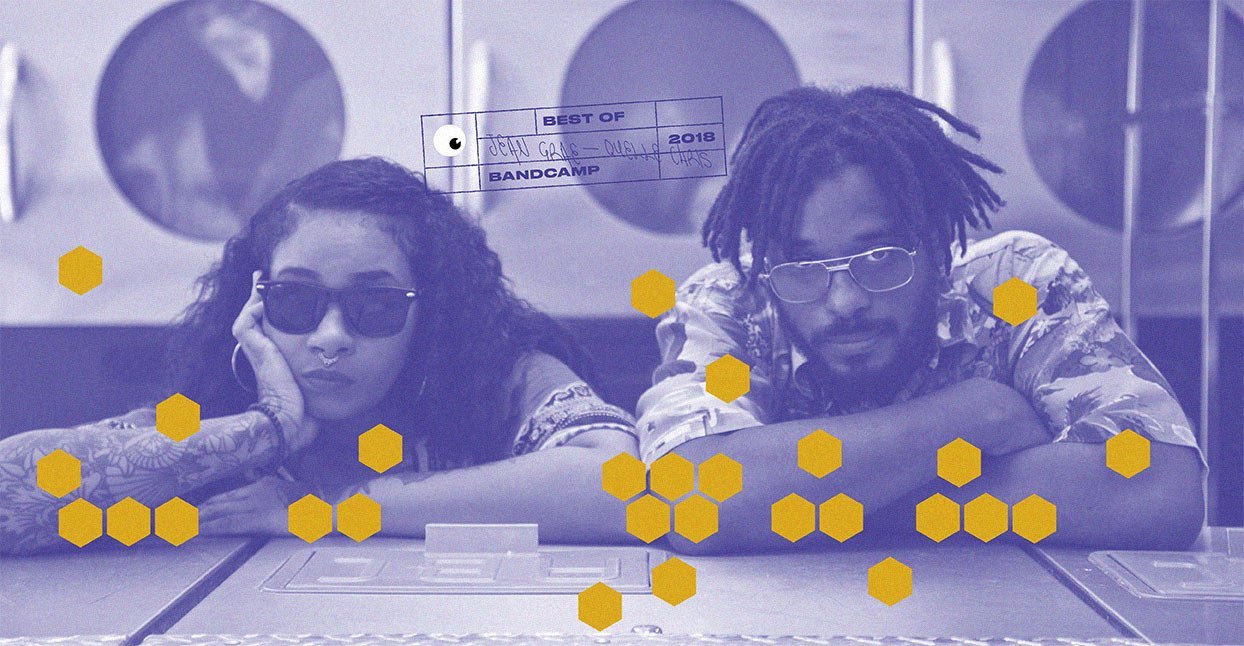 For our “Artist Reflections” series, we asked artists responsible for some of the year’s best records to discuss a topic that’s been close to their hearts over the last 12 months. In this piece, Jean Grae & Quelle Chris discuss Everything’s Fine, marriage, and what’s in store for 2019.

It seemed Everything’s Fine marked a creative breakthrough for you two. How did 2018 feel for you?

Quelle: I feel like we just kinda did what we do. I feel like the breakthrough was probably in us doing what we do well together.

Jean: Yeah, I don’t think anything felt different, or like we had a “rap-piphany,” but I think it was the idea of working together. And it’s not like we haven’t worked together on other albums, but with this one, we had a label behind it, and we were really trying to make something cohesive between the two of us, something that wasn’t a comedy, animation, or something else. I think we were both kinda surprised by the critical acclaim and the attention. I think the political climate had a lot to do with it.

Quelle: It was the right message for the right time. I think that’s why our record struck a chord with folks. Sonically, the meshing of the two sounds broke through. You get people on one end who prefer Jean’s stuff, or people on another end who prefer my shit. You might not like peanut butter, you might not like jelly, but peanut butter and jelly together is pretty damn good.

Anything that isn’t the norm is often called “different,” “quirky,” or “weird.” What are your thoughts on that?

Quelle: I consider my stuff very hip-hop. A lot of people would say, ‘Oh, I’m an artist.’ I’m like, ‘No, I’m a rapper. I’m an artist, too, but I’m a rapper.’ And when I listen to my stuff, it sounds like everything I grew up listening to that influenced me. To me it never sounds weird at all. It just sounds like hip-hop to me. So I never really understand when it’s called “quirky.” To me it just sounds normal.

Jean: I get called pretentious a lot. I don’t understand what makes my music pretentious. It’s confusing to me. These are very simple and relatable topics. It’s just that I’m not necessarily doing it like everyone else. I don’t mind nursery rhyme form, I think those form some of the best songs, but I think people are more complex and nuanced, more than they even give themselves the chance to be in public. A lot of times, we’re deciding to be the simplest forms of ourselves in public. Anything that’s palatable is easier to market, just because it’s become routine. I don’t think we stepped into anything. I think if Quelle or I decided to do some weird shit, people would call it weird. Like, ‘Oh, that was weird.’ This is still just the same format. It’s mostly 16 bars and an eight-bar hook. It’s all the same format.

Has life changed for you both given the album’s reception?

Jean: Oh, it hasn’t changed at all.

Jean: [laughs] I think we both went through a lot of personal and collective transitions. Then career transitions. So it’s been a very fast-moving, interesting year. The record wasn’t even a huge part of it.

Quelle: It was kinda like the intro to the year. I mean, yeah, you know, we got married. Shit like that. The album, the visuals, then there was marriage. Planning the wedding was just…

Jean: It was a lot. Holy shit.

Quelle: Right. Fuck everything else. Fuck Donald Trump. I don’t give a shit, I’m trying to plan this wedding. This shit is crazy.

Jean: I don’t perform like that anymore. I have a team of agents now. All I’m doing is pitching shows and having meetings. This is a totally different life for me. So, yeah, it’s been a great year with a lot of work, a different kind of work. Music work is one thing, but we’ve taken on a lot of different jobs that are extremely challenging, including planning a wedding. That shit was crazy. We both put on shows and productions, but I think we both came out of it with a different way of understanding how to work. It changed a lot of things.

Quelle: The album would’ve been crazy if we did it after we got married.

Any new collaborative projects in the works?

Jean: I’m working on That’s Not How You Do That as a show, sort of like the adult Sesame Street, which I’m very excited about. I’m very excited about puppets [laughs]. I think we always work on everything together anyway. I was already trying to claim a few videos to shoot from his new album. We both are doing things on each other’s thing. That statement sounded fun.

Quelle: Jean’s taken a good part in some of the best work on this forthcoming album. She did some writing, some singing, some arranging. Yeah, it’s all terrible, but I love it. Nah, she got in there and did some awesome shit on this album, and she’s got some shows coming up. When needed, we call upon each other.

How has marriage impacted your creativity?

Quelle: Being with someone who understands your workflow and your job is key. Now, after sharing this album experience and so many other things this year, I think we understand how the other person works. She does her thing and I come in every blue moon if she needs help. Or if she’s like, ‘Yo, fuck off, Quelle,’ I’m like, ‘Yeah cool, I’m ‘bout to fuck off. Fuck you, too.’

Quelle: You’re building little worlds, so sometimes you gotta let the other person get inside their own world. Being married hasn’t changed everything, but being with someone who understands what you’re doing and is able to be there with you is important. It’s different if you’re with someone who’s like, ‘Ah, you’re back there writing some crazy thing all day. Why don’t you get up and get a real job?’ It’s like, no, we know we’ve got real jobs and the other person respects that. I think? Hopefully.

Jean: It’s really knowing how to take care of each other when you’re in creative zones. That’s really important. You have to have your own separate things, but be there for the other person to make it a little bit easier. Because creating anything is fucking hard.

-As told to Marcus J. Moore