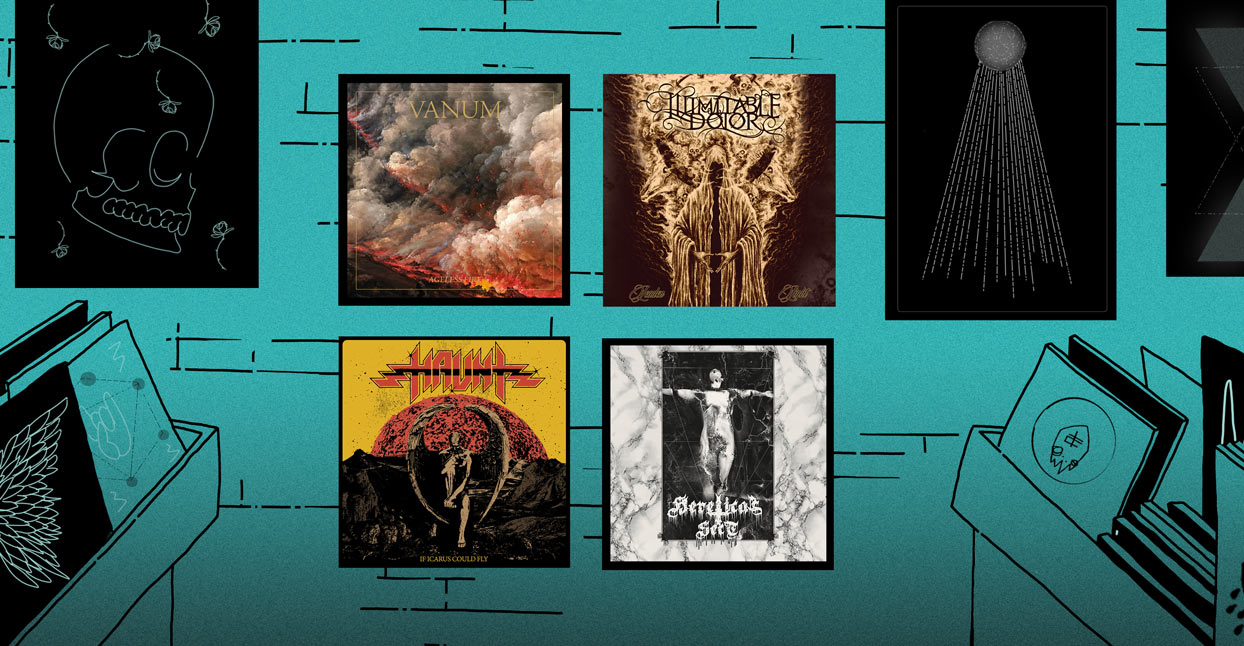 This month’s best metal runs the gamut, from ’70s-style proto-doom to ripping, occult metalpunk to triumphant power metal, with stops at all points between

More than most of their contemporaries, Magic Circle embraces the late ’60s and early ’70s rock that gave birth to doom metal—bands like Blue Cheer, Black Sabbath, Deep Purple, and Sir Lord Baltimore. Like Ozzy Osbourne on the early Sabbath records, frontman Brendan Radigan (The Rival Mob, Mind Eraser) possesses a technically limited range that he nonetheless makes the very most of, stretching his hardcore-honed pipes across the band’s rollicking proto-doom compositions. The opening one-two punch of “Departed Souls” and “I’ve Found My Way to Die” shows what this band is capable of at their best, evoking the house band at a dimly lit rock dive without losing doom’s intrinsic epic qualities.

When I was a teenager, my best friend and I coined the term “CD Connection Metal,” shorthand for the kind of slightly off-brand metal that always seemed to flood the used bins of CD Connection, our local record store. These were generally albums made by bands who were wholly anonymous to most of the world but, for whatever reason, ubiquitous at the store that shaped our musical identities. Like pornography, you knew “CD Connection Metal” when you saw it. And so it is with the utmost reverence and affection that I describe Illimitable Dolor’s Leaden Light as “CD Connection Metal.” The Australian band plays stately, melodic funeral doom in the vein of early My Dying Bride and Evoken. The songs on Leaden Light never quite reach the transcendent heights the genre is capable of it’s at its apex, but they scratch an itch that only serious devotees of this music can. The band finds a perfect balance between their ambitious compositions and their studious recreation of the genre’s sound, right down to the deep, sighed vocals and the omnipresent synthesized church organ. If I had come across this album at CD Connection as a kid, I absolutely would have fallen in love with Illimitable Dolor. Some kid will have that experience, somewhere, and that warms my heart.

Haunt
If Icarus Could Fly

Haunt’s sound has always made them seem like logical heirs to the ’80s heavy metal tradition, but these days, their work ethic is doing just as much lifting. If Icarus Could Fly follows January’s Mosaic Vision EP—also covered in this column—which itself came hot on the heels of Burst Into Flame. There was a time when metal bands, usually thanks to contractual obligations and whip-cracking management, might release two full-lengths and an EP in the span of eight months, but it’s unusual today, when the incentive structure is so warped. (Frontman Trevor William Church’s other band, Beastmaker, released 10 EPs last year, so maybe Haunt’s accelerated release schedule is mainly about his own obsession.) At any rate, If Icarus Could Fly is another strong entry in Haunt’s growing discography. Church and his co-guitarist John Tucker are settling into that Downing/Tipton groove, their harmonies seemingly a result of a total mind-meld. Church also continues to improve as a singer, and on the presumably Iron Maiden-inspired title track, he bends the hypnotic verses and simple, effective chorus to his will, while escalating the stakes ever higher. If Icarus Could Fly should hold you over until Haunt’s inevitable next album—which is probably coming any minute now.

The degree of difficulty in what Devil Master is doing on debut full-length Satan Spits on Children of Light is worth examining. The Philly band set out to make a metalpunk opus that would be metalpunk in the truest sense of that word—half metal, half punk, embraced by both communities. They’d do it with the flanger-drenched deathrock guitar, Discharge drumming, and depraved black metal vocals. They’d also write songs with titles like “Black Flame Candle” and “Dance of Fullmoon Specter,” dress up like vampires for their press photos, play live in hooded cloaks and surrounded by Halloween-store cobwebs, and (apparently) do it all with a straight face. They pull all of it off completely. All hail Devil Master.

The vision of death metal espoused by the Irish band Vircolac on their debut album Masque isn’t easy to pin down. It embraces the griminess of the genre’s old guard, but it’s not old-school death metal in the conventional sense. It can be blisteringly atonal, but the band leans on memorable songwriting. It’s instrumentally proficient, but it couldn’t be further from tech-death. Ultimately, it’s the band’s command of atmosphere that defines the album. Masque feels like being inside the crypt depicted on the album cover, surrounded by ancient death and decay. The band’s greatest triumph is that they maintain that atmosphere while throwing in whatever tricks they deem necessary to make their songs work.

The hooded, anonymous black metal trio Heretical Sect cites, “the physical and spiritual genocides of the Southwest” as its primary inspiration. They seek to dismantle what they call “the nostalgic lens of cowboy culture” through their music—a very worthy cause, and one they’re well-equipped to evangelize for. The Southwest that’s evoked on Rotting Cosmic Grief is miles from the Hollywood version. It’s a stark, bleak, often scary place, and Heretical Sect meet it with the anger and fury of their songs. The four tracks on this debut EP are vicious and pummeling, but they’re also in touch spiritually with the landscape the band feels so conflicted about. It’s a moving listen.

Outside of the success of a Sepultura here and the cult appeal of a Sarcófago there, Brazil’s contributions to metal history have long been underappreciated. Mystifier have been making mind-bending, occult black metal in their hometown of Salvador since 1989, and while real heads know what they’ve been up to, they never rose to the level of acclaim of their Norwegian, Swedish, or Greek peers. Perhaps Protogoni Mavri Magiki Dynasteia, the band’s first album in 18 (!) years, and first for tastemaker label Season of Mist, will change that. It’s immediately evident from the opening bars of the title track that there’s still no one who sounds quite like Mystifier. They share the mid-paced riffing and of the Hellenic scene, but they incorporate bizarre washes of synthesizer and ecstatic vocals that push the album into a space that they alone occupy.