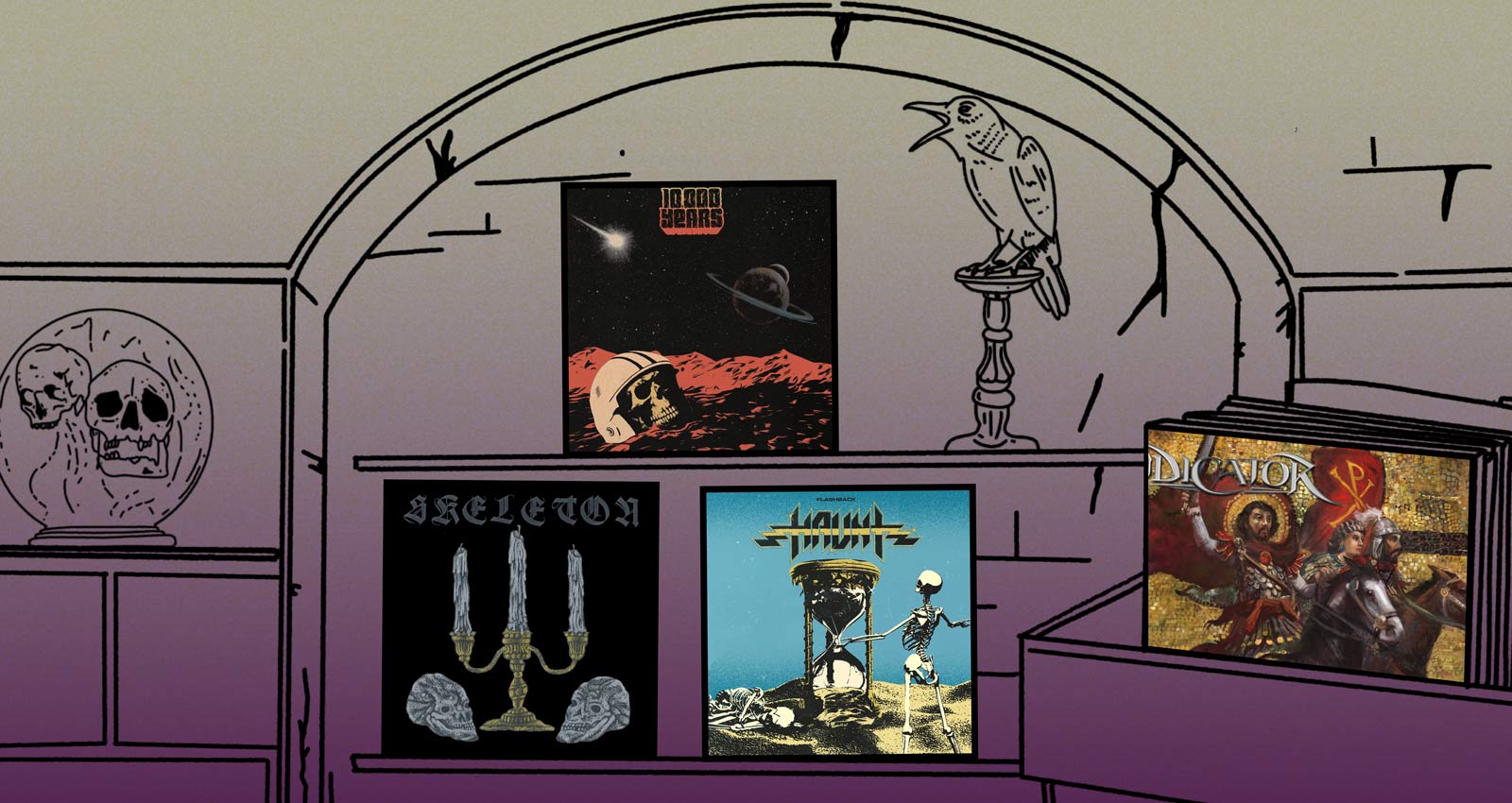 On Bandcamp’s most recent no-revenue-share day, the venerable Bindrune Recordings released Overgrow to Overthrow, a 31-artist compilation with all proceeds benefiting Black Lives Matter and Life After Hate. As the label home to a plethora of anti-fascist, anti-racist bands including Panopticon and Nechochwen, Bindrune has long been a voice for justice within the black metal community, and this compilation let them put quite a lot of money where their mouth is. It’s my greatest hope as a metalhead that initiatives like Overgrow to Overthrow continue to proliferate. As long as they do, I’ll do my best to highlight them in this space.

Perhaps no artist in heavy music has a more daunting discography than Boris. Not only do the Japanese legends have, at latest count, 30 full-lengths to their name, they also release splits, singles, collaborations, live records, and EPs at a dizzying clip. Beyond that, they’re so genre-fluid that any given record you throw on might sound completely different from another one, making it hard to get your head around their creative arc as a band. I suggest that you completely ignore all of that and listen to NO. It doesn’t take any knowledge of Boris whatsoever to appreciate what they’re doing on this self-released album’s 11 tracks. The riff stands at the center of all these songs, even as they bob and weave from hardcore to doom metal to crust punk to shoegaze. Boris once called an album Amplifier Worship and an entire generation of heshers knelt before their Oranges and Sunns in its wake. That title sold them short. If it was only about the amplifiers, the riffs wouldn’t have to be this immediate, this infectious, this fucking good. Whether NO is your first Boris album or your 30th, it’s likely to remain one of your favorites.

Leave it to a Texan band to make the sweatiest album of the summer. Austin’s Skeleton infuse their thrashy first-wave black metal with hardcore’s animating energy, and every song on their self-titled debut album feels like being in the middle of a dive bar mosh pit in July. If Power Trip had been weaned on Bathory instead of Slayer, perhaps they’d write something like Skeleton. Though they’re more than capable when conjuring spooky atmospherics or stomping through mid-paced ass-whoopers, Skeleton are most comfortable operating at warp speed. That’s the mode they’re working in on the one-two punch that opens the album, “Skeleton” and “Mark of Death.” Both songs feel like instant classics, and it’s a shame that we’ll have to wait awhile longer to hear them from the pit.

Judicator
Let There Be Nothing

Judicator deliver on exactly what they advertise. They’re a bombastic, ’90s-style power metal band, and they make concept albums about ancient history. If that sounds even remotely interesting to you, meet your new favorite band! If it sounds like something you would not like, you really will not like it. Now that we’ve got that out of the way—Let There Be Nothing rules. Written from the perspective of the general Belisarius on his 6th century campaign to reconquer former Roman territories for the Empire, the fifth Judicator full-length channels the adventurous spirit of early German power metal while grounding its songs in a surprisingly restrained sense of melodic classicism. Where their previous album, The Last Emperor, mostly operated in a speed metal register, Let There Be Nothing’s finest moments arrive when things settle down. The acoustic passages sound more assured, and “Gloria,” the dynamic duet between frontman John Yelland and Soulmass’s Mercedes Victoria, is the best song on the record. They don’t have Hansi Kürsch singing on the record this time out, but Judicator have once again asserted their stake to the claim of being Blind Guardian’s true successors.

For the past decade, Chicago’s High Spirits have stood out from the trad metal scene by playing “100% high-energy rock music!!!”—exclamation points theirs. They might be the most positive band in the world. Their albums are heavy metal commencement speeches, explicitly inspirational in tone and execution. When you listen to High Spirits, you feel like you can take on the world. In other words, Hard to Stop is just what 2020 needed. It’s the fourth High Spirits full-length, and while it doesn’t necessarily add anything new to the band’s sound, they still continue to perfect their chosen craft. Its 35 minutes elapse in the blink of an eye, and “Professor” Chris Black delivers song after song of hooks-driven, major-key heavy metal, made to be blasted out of car windows on hot summer nights. Black channels the (high) spirit of Judas Priest, Scorpions, Thin Lizzy, and Dokken into these lean riff machines, and each one feels like a triumph over the forces of darkness. The world is a swirling vortex of negativity. Most metal bands are contented to soundtrack that vortex. High Spirits make you believe you can conquer it.

Drouth
Excerpts from a Dread Liturgy

Translation Loss Records has been an essential curatorial voice in heavy music for almost 20 years now, releasing definitive albums in sludge, post-metal, noise rock, grindcore, and other similarly scuzzy sounds. They seldom release straight-up black metal. That alone makes the sophomore album by Portland, Oregon’s Drouth worth hearing. Translation Loss’ ear has been vindicated once again; Excerpts from a Dread Liturgy is a truly breathtaking black metal album. Its five songs are epics in miniature, each moving nimbly between knotty, progged-out passages, tempered melodicism, and pure full-steam-ahead black metal fury. It’s the rare black metal album that conjures a richly rendered, lived-in atmosphere without falling prey to the tropes of atmospheric black metal. It’s easy enough to hammer away at a simple riff for minutes at a time until it becomes “hypnotic.” It’s harder to build a tangled labyrinth of riffs that feels like a real world. Drouth are up to the challenge.

The late Lee Van Cleef was one of cinema’s all-time badasses. In The Good, the Bad, and the Ugly, he’s so bad that even when stacked against Clint Eastwood and Eli Wallach, he gets to be The Bad. In Escape from New York, John Carpenter had him wear a single gold earring even though he was pushing 60, and it actually looked fucking cool! In the middle of “Lee Van Cleef,” a song by the Swedish stoners in 10,000 Years, vocalist Alex Risberg screams out, “Summon him!”—and honestly, I get it. Trying to resurrect Lee Van Cleef is pretty much par for the course for 10,000 Years, the band’s debut album. This is big, dumb stoner metal with a fat bottom end, hazy, a huge pile of fuzz-drenched riffs, banshee-howled vocals, and the good sense not to take itself too seriously. It won’t change your life, but if you need a stoner metal fix, you could do a lot worse.

Metal fans—this one included—love to get hung up on subgenre classifications. Australian multi-instrumentalist NKSV graciously saved us the trouble by dubbing the maximalist maelstrom he makes as Rebel Wizard “Heavy Negative Wizard Metal.” The genre, the band, the man himself—all are synonymous. Magickal Mystical Indifference is the third LP NKSV has released under the Rebel Wizard name, and it distills his approach down to its essential elements. With a couple of notable exceptions—the melancholic torch song “Not Rain But the Wizards Tears” and the spacey synth exercise “Love Wisdom Everything Nothing”—these songs deliver mid-paced, chugging riffs, shredding leads, and throat-ripping vocals. NKSV’s lo-fi roots are evident in the production on the vocals and drums, but they push up against his more mainstream inclinations, resulting in a thrilling conflict of function and form. Heavy Negative Wizard Metal forever!

Trevor William Church’s trad metal project Haunt already appeared in this column once this year, with their January album, Mind Freeze. Flashback is their second full-length in six months and fourth since 2018, and while it would stand to reason that the bloom would be coming off the rose by now, Church is just too good a songwriter to let the quality wane. If anything, as he continues to hone his craft, the songs just get closer and closer to feeling like legit pop hits. It’s not crazy to imagine something like “Electrified” dominating the original Headbanger’s Ball. Check back in November when the third Haunt album of the year inevitably makes the cut.