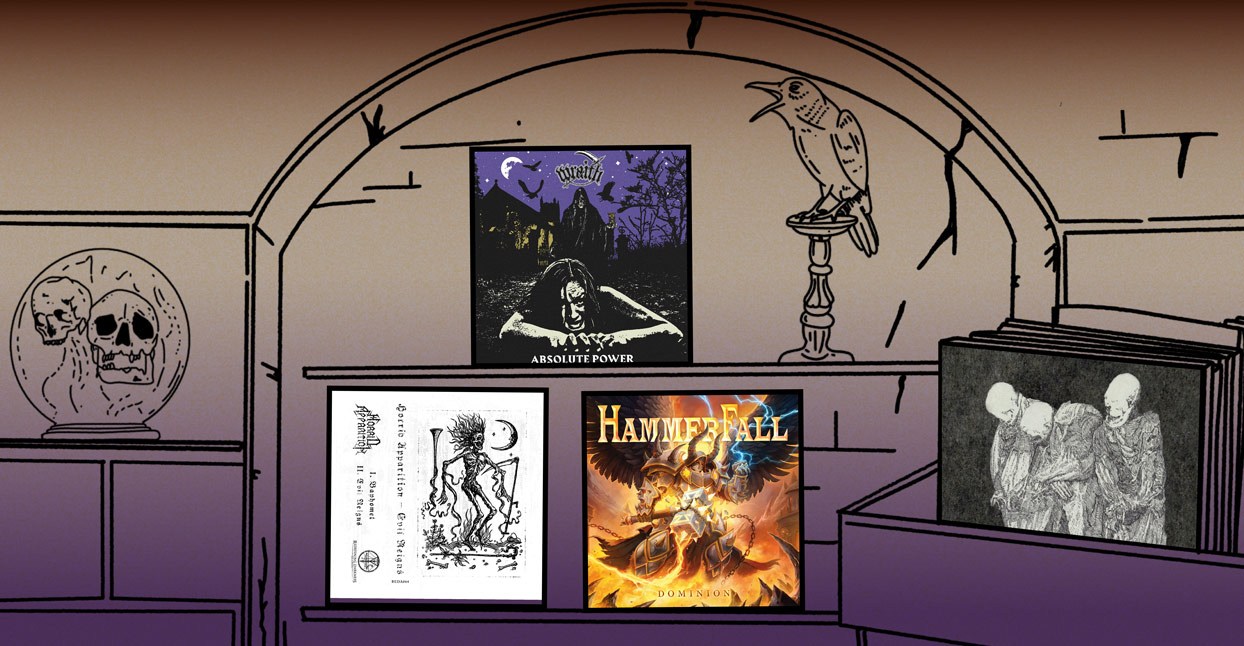 August’s roundup of the best metal on Bandcamp includes a late-career triumph by Swedish power metal lifers, a stirring instrumental post-metal album by a stalwart of that genre, and plenty of harrowing black, death, and black/death metal.

Gothenburg’s HammerFall rank among the most successful power metal bands of all time, and their sound has come to stand in as the archetype for a certain strain of the genre—huge, major-key melodies, soaring choruses, heart-on-sleeve emotion, and an aw-shucks earnestness that’s tough for some metalheads to stomach. Love them or hate them, they’ve been tirelessly doing their thing for 25 years now, and their 11th full-length, Dominion, is their best in a decade. It has two of the best ballads they’ve ever written in “Second to One” and the gorgeous closing track “And Yet I Smile,” and the rest of the album is peppered with the kind of mid-paced rockers and horns-up shredders they’ve spent all these years perfecting. “(We Make) Sweden Rock” is a patriotic barn-burner bound to soundtrack some Swedish national team’s Olympic highlight reel the way “Hearts on Fire” did for their women’s curling team in 2006. HammerFall certainly aren’t reinventing the wheel here; like AC/DC or Motörhead, what you’re paying for is a new batch of songs that sound like the band who made them. Dominion just happens to be the best batch of those songs HammerFall have made in quite some time.

Russian Circles are survivors of two scenes that dominated heavy music in the mid-’00s but have waned in cultural capital since: instrumental post-rock and Isis-style post-metal. The Chicago trio quickly rose to the top of the heap in both subgenres with their first two records, Enter and Station, and have been steadily cranking out excellent work on a regular basis since. Blood Year is an affirmation of their continued greatness. They’ve always been able to ride a groove better than most of their peers, and on Blood Year’s first proper track, “Arluck,” they lock into one of the best of their career. They don’t let up from there. The rest of the album is full of the kind of heady, propulsive instru-metal they specialize in, with plenty of dark nooks and crannies to get lost in.

I was listening to this album at my parents’ house to research this column, and my brother walked into the room and deadpanned, “I love this song.” I cracked up, even though I do love this band. Mylingar doesn’t exactly make foot-tapping music. Döda Själar is a punishing vortex of black/death insanity, not a terribly fun listen even if it is a satisfying one. A lot of the pleasure comes from seeing how far the band can push their aural terror. On “Nedstigningen,” the riffs sound like a distorted vacuum cleaner and the vocals sound like dry heaves. This isn’t generic, gas-masked war metal, though. Mylingar has a deep understanding of how to create an atmosphere using extreme sounds, and Döda Själar is more legitimately terrifying than it is cartoonish.

The punky blackened thrash played by French/Dutch duo Horrid Apparition on their debut demo is essentially a tribute to early Slayer, Venom, and Bathory. That’s not a knock on them; it’s not often you hear a new band with the nerve to challenge the genre’s all-time greats right out of the gate and actually do their sound justice. The two songs included here, “Baphomet” and “Evil Reigns,” are furious, economical rippers, and frontman Elio Cogo’s slightly-accented Tom Araya impression is a charming exclamation mark on a tantalizing demo. I can’t wait to hear what’s next.

From the moment you press play, there’s no question that Hamburg’s Fire are heavy metal lifers. The two long songs on Walking on Bones are remarkably assured old-man trad metal, the kind of music you can only make when you’re a lifelong student of the genre. Guitarist and band leader Schrörg (né Jörg Schrör) was a founder of cult ’80s bands Megace and Xandril and, briefly, a live member of Gamma Ray. It’s his enthusiastic vision and playing that guides Fire. In a statement, the band said: “We gave up on becoming rock stars. We just play what we love, and that is heavy music.” That love is obvious, and it’s a joy to hear them settle into it.

The black metal orthodoxy of Totenwache is evident in their press photos, resplendent as they are with corpse paint, invisible oranges, and grim expressions. Their logo has not one but two inverted crosses in it. This is, in fact, your father’s black metal. But damn it if they don’t make that seem exciting! Der Schwarze Hort, the Hamburg band’s debut full-length following a demo and a split release with their fellow countrymen in Mavorim, is a scornful, if surprisingly slick, black metal assault that hearkens to the genre’s mid-’90s boom. Totenwache especially excel when their songs break into huge, swelling melodies, perhaps showing the way forward for a band who shows tremendous promise.

D-beat hardcore and Swedish death metal share plenty of DNA, and a cottage industry of bands has successfully married the two sounds (most notably Disfear, a D-beat band fronted by Swedish death metal’s most famous vocalist, Tomas Lindberg). Estonia’s Swarn tap into that rich crossover tradition on their nasty, punishing debut full-length, Black Flame Order. The album spends most of its time bludgeoning you, but when it occasionally pumps its brakes and visits the realm of doom metal, Swarn are impressively adept at creating a creepy, evil-sounding atmosphere. You’re here for the riffs, though, and Black Flame Order has plenty of those, packed into an efficient 29-minute runtime.

It’s got to feel surreal to be Joel Grind. The bleached-blonde maniac’s work in Toxic Holocaust is now so seminal that there’s a young band from Indiana called Wraith who are imitating it down to the tiniest detail. That’s not to say that Absolute Power doesn’t rule. It kind of rules! If you’ve ever gotten wasted and wrecked your neck to Hell on Earth or An Overdose of Death, you’re absolutely going to like it, and the album-closing cover of Misfits’ “Death Comes Ripping” is reason enough to stick around. Wraith are still young. They may well develop into a band with their own vision and sound. If they don’t, open another beer and bang your head to some extremely fun blackened metalpunk.