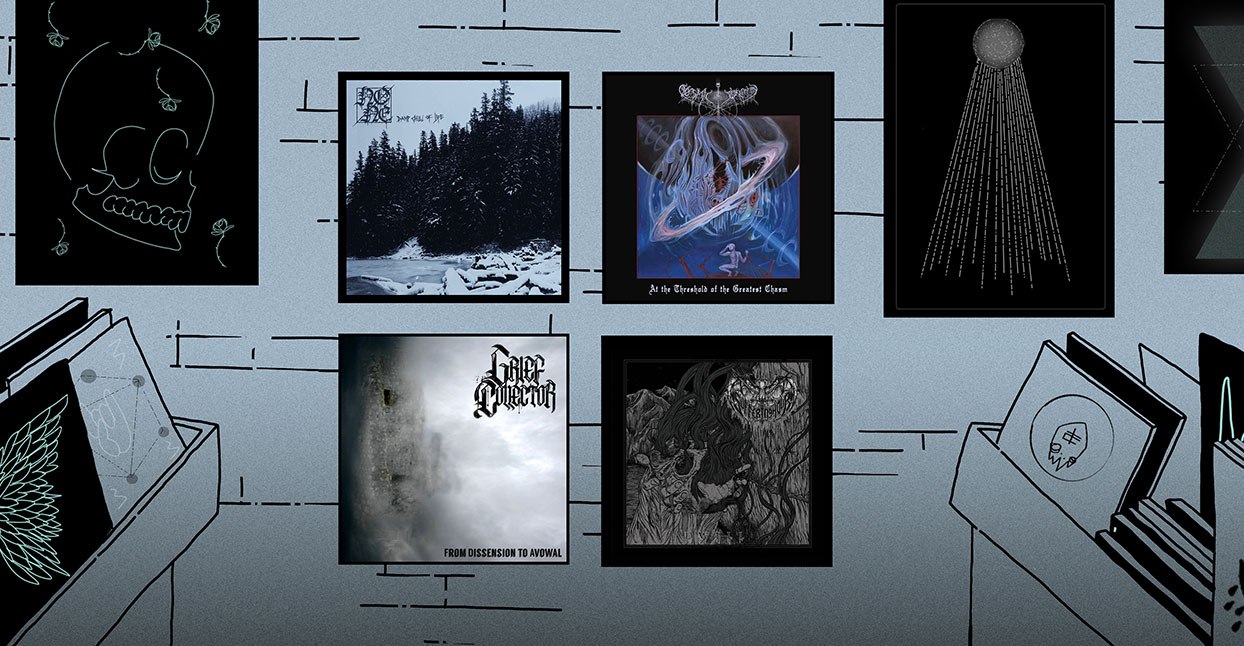 Toronto’s Smoulder offer a vision of doom metal on their debut full-length Times of Obscene Evil and Wild Daring that’s as awe-inspiring as it is genuinely novel. There’s plenty of musical precedent for the band’s soaring vocals, majestic arrangements, and lyrical fixation on nerdy fantasy books, but singer and lyricist Sarah Kitteringham infuses Smoulder with a feminist bent that’s uncommon for the genre. (Disclosure: She’s a Bandcamp employee.) The album opens with the one-two punch of “Ilian of Garathorm”—named for one of the few female incarnations of Michael Moorcock’s multi-dimensional hero The Eternal Champion—and the utterly badass “The Sword Woman.” It shouldn’t be remarkable that we’re getting a specifically female perspective in the context of epic doom, but it is, and Kitteringham makes the most of the opportunity. She absolutely belts these songs. The rest of the band is brilliant as well, sounding as comfortable playing at an Iron Maiden gallop as they are at a Candlemass crawl.

For a certain type of genre purist, symphonic black metal is the ugly stepchild of the Norwegian Second Wave. What Emperor wrought on classics like In the Nightside Eclipse and Anthems to the Welkin at Dusk very quickly curdled into whatever it is Dimmu Borgir and Cradle of Filth were doing in the early ‘00s. So, it’s always bold when a new black metal band appears wearing their synths on their sleeves, as Gardsghastr does on debut LP Slit Throat Requiem. They take to it naturally; this is the best symphonic black metal album I’ve heard in ages—at least since the 2015 False LP. There’s a healthy dose of Emperor worship on Slit Throat Requiem, no doubt, but Gardsghastr also utilize atmospheric negative space in a way that’s strikingly modern. Four of the album’s eight songs crack the eight-minute mark, and that’s when the band really shines—the dialogue between the grandiose elements of their sound and the more patient ones, playing out on the vast canvas it demands.

U.S. death metal trio Suffering Hour displayed a restless curiosity on their 2017 debut LP In Passing Ascension, which they take to a new level on the 18-minute, single-song EP Dwell. Too slippery and amorphous to be pigeonholed into any death metal subgroup, their approach on Dwell is a holistic one. The scope of ambition recalls Edge of Sanity’s mammoth Crimson, but the band hedge against its maximalist prog-death tendencies with a healthy dose of Portal’s atmospheric skronk. Dwell’s greatest triumph is that it doesn’t just feel like an extra-long sequence of riffs; it’s an 18-minute journey with a satisfying arc and resolution.

Four albums into their career, Inter Arma remain impossible to pin down. The Richmond band could ungenerously be grouped with the sludgy post-metal movement sometimes called the Cult of Neur-Isis, but while they might end up in some of the same emotional spaces as Through Silver in Blood or Panopticon, the toolbox they use to get in there seems limitless. On Sulphur English, there are punishing death metal songs, black metal freakouts, heady psych journeys, and moments of utter darkness and of refracted light. It’s impossible to catalog every inspired songwriting decision made on this record—every moment where Inter Arma zig where most bands would zag. At first, you can’t even make heads or tails of what a lot of the album is trying to do. All you can do is sit with it until it lets you in.

Wormwitch
Heaven That Dwells Within

On their sophomore LP Heaven That Dwells Within, Vancouver’s Wormwitch make a black metal record that’s, above anything else, a blast to listen to. Spiritually, Wormwitch aren’t far off from their Prosthetic labelmates Skeletonwitch, another blue-collar outfit whose best work took black metal and dialed the catchiness and riff-writing all the way up, fusing them to song structures borrowed from punk and thrash. Heaven That Dwells Within isn’t a joke, but it doesn’t take itself so seriously that it can’t throw in a hardcore gang vocal or a Tom G. Warrior “ooh!” with a wink.

Cosmic Putrefaction
At the Threshold of the Greatest Chasm

Gabriele Gramaglia is already a mainstay on the I, Voidhanger roster with his other two projects, Summit and The Clearing Path. But the debut album from Cosmic Putrefaction marks his first stab at death metal. Of course, this being Gramaglia and I, Voidhanger, it’s anything but conventional. At the Threshold of the Greatest Chasm’s central tenet and chief innovation is pairing “disreputable” death metal tropes with highbrow presentation. The artwork, song titles, personnel, and atmospheric interludes suggest challenging, esoteric music. The stop-start riffs, pinch harmonics, drumming, and guttural vocals suggest slam, that breakdown-fueled subgenre of brutal death metal. It’s pretty ingenious, though there’s certainly more than just slam riffs to unpack in the album’s tight but dense 28 minutes.

None
Damp Chill of Life

A lot of depressive black metal can feel like a put-on, but you never doubt for a second that the dudes behind Damp Chill of Life are going through some shit. Misery seems to drip from every note. And while it’s dangerous to romanticize depression, None don’t make it sound cool or fun. The vocals sound like the parting groan of a dying man. The guitars are strangled by so much noise and reverb that they sound like they’re being played underwater. Damp Chill of Life is the kind of bleak place you won’t want to enter unless you’re in the right mood; when you’re ready for it, the experience can be beautiful—it’s the sound of relief in shared misery.