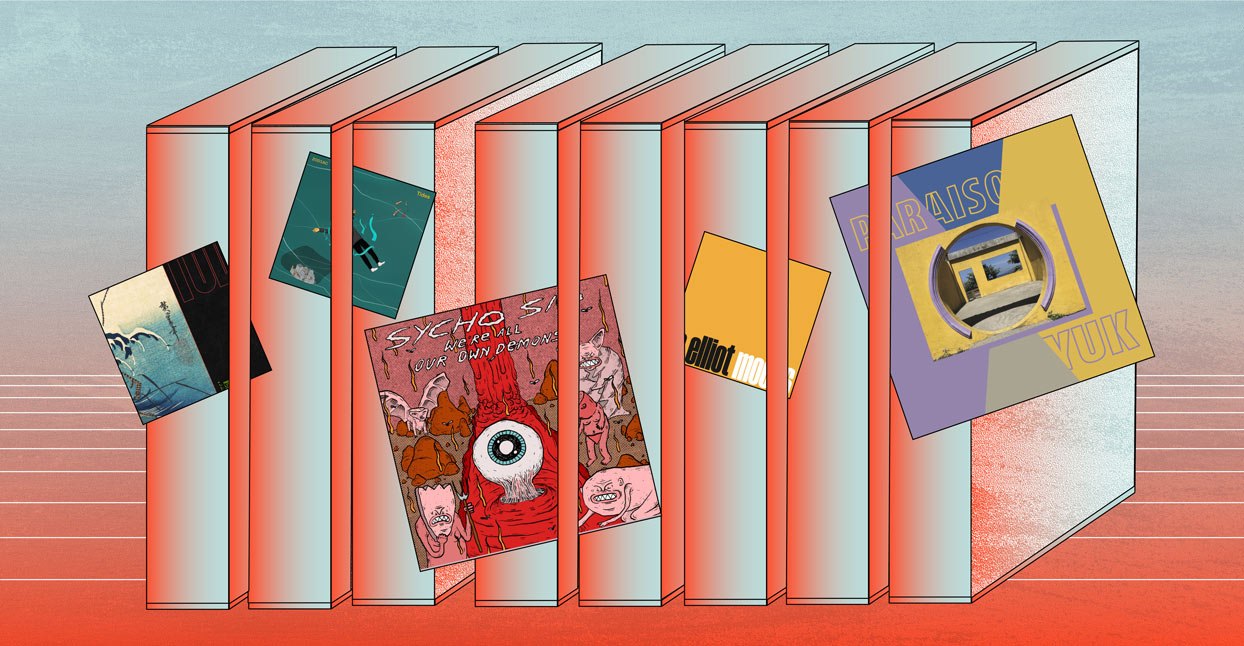 October’s Best Beat Tapes features records from all over the sonic spectrum. There are quiet, textured projects meant for moments of respite, and those best played on the largest and loudest speakers you can find. There is a project from a Roots band member with masterful flips of familiar samples, a dark rap-rooted tape from a member of Mutant Academy, an EP of earth-shattering bass, and much more.

If you’ve watched clips of the cult-cum-tax-shelter Kanye West is calling “Sunday Service,” you might’ve recognized the band/choir flipping a well-known Soul II Soul single. What you might not have known is that West & co. are actually recreating “Soul II Stro,” a beat from LA producer and Roots band member Stro Elliot. Perfectly transcendent without the choir, the beat appeared on Elliot’s self-titled debut (and his Soundcloud years before that). Stro Elliot was one of the best beat tapes of 2016, a stellar display of drumming which proved that even the most overused funk and soul samples could still sound new in the right hands.

Moods is yet another compilation of Stro beats that freak the familiar, upholding his status as one of the best finger drummers alive. On opener “The Egyptian Way,” he reworks a Bangles hit over an arrangement that knocks like a ‘64 Impala outfitted for interstellar travel. The drums come from g-funk stock, but the synths and the melodies drift towards spaced-out soul. “Gifted” chops up gospel from Aretha Franklin with precision, the claps hitting like thousands of hands catching the spirit (and the beat) in unison. Best of all is the seven-minute-plus “Marvin’s Mood,” where Stro layers and loops Marvin Gaye’s legendary vocals over multiple drum patterns. He weaves them together so seamlessly that one could mistake them for alternate takes from the original recording sessions.

Sycho Sid
We’re All Our Own Demons

Another month, another excellent tape from a Mutant Academy producer; Sycho Sid’s We’re All Our Own Demons is a wide-ranging project set in a knocking purgatory. The liminal journey begins with the spacey, murky “Pearls Before Swine,” where it sounds like specters are moving between the drums and warbling synths. “Didn’t Make It” follows and speaks to the tape’s breadth. Here Sid pairs pounding, quasi-footwork beats with the expansive, swirling atmospherics of cloud rap. It’s DJ Rashad meets Blue Sky Black Death. Lightning-quick, concussive, and ethereal, “Didn’t Make It” gives new meaning to the T.S. Eliot phrase “eternal footman.”

Each song puts a new twist on the sound of Sid’s afterlife, but all strike a balance between dark and light, oscillating between haunted remembrance and hope. “Lust” and “Better Halved than Whole” are slices of somber and wistful boom-bap, the kind of beats to play when you’re commuting through rain-streaked streets and reflecting on what makes life worth living. “Grievances,” with drums that sound fired from a semi-automatic and an evocative blend of keys and ghostly choral vocals, could be a lost DJ Shadow B-side circa 1996. By maintaining the balance, Sid strings all of these sounds into a tonally cohesive record. You may float to different parts of the world he creates, but you never leave it.

Good album titles are purposeful. They convey the album’s dominant theme and/or mood, or serve as a truncated thesis. For L.A.-via-Utah producer Tsuruda, FUBAR (Fucked Up Beyond All Recognition) is the latter. The bass-centric beats are calibrated to split bone and liquify vital organs. This is War of the Worlds music: the sounds of an extraterrestrial invasion and the ensuing military conflagration, sampled for maximum devastation. On “Prologue,” creepy, creature-like skittering gives way to a dubbed-out rumble with ample low end. “Kimchi Crisis” is dub reggae fused with and sometimes buried by otherworldly bass: think a very freaked-out Scientist, coerced into collaboration with aliens who blast Rinse FM on their UFO. Elsewhere, the title track finds a middle ground between trap and bass, as hard drums hit between walls of body-vibrating sound. Listeners who value their speakers should press play with caution; those who want to coax their neighbors into making panicked calls to the Pentagon, on the other hand, are instructed to do the opposite.

Music collectives usually organize around a unifying sonic aesthetic. My Hollow Drum (MHD)—a group of DJs/producers from Costa Mesa and Chino Hills, Ca.; with ties to L.A. Internet radio station Dublab and Low End Theory—found simpatico via textured, collage-like downtempo beats. For evidence of their aural kinship, compare respective albums from collective members Teebs—the just-released Anicca—and yuk. Their beatmaking approaches may differ, but the overarching aim—stoking the warmth hiding in the margins of a given rhythm with fuzzy lo-fi textures and plain-stated instruments such as chimes—remains the same.

Co-founder and head chef of the Jonathan Gold-approved Filipino restaurant LASA, Chad Valencia—A.K.A. yuk.—has been cooking outside of the kitchen since MHD began (see 2010’s A D W A ). His music, much like Teebs’s, is a reflection of nature’s sublimity. Percussion is buried beneath, breaking through, or in concert with layers of ambient noise. Light scattering on breeze-blown dust (“mndloop”), waves lapping a sun-washed shoreline (“purple”)—yuk. created the beat equivalent of these natural moments on 2015’s a n a k.

His new EP Paraiso begins with a recording of the ocean. The water is initially calming, but then it sounds like yuk.’s pulled us beneath the surface. Drums pound as though cushioned by sand and swirling currents. Throughout Paraiso, it feels as though yuk. uses the instrumentation to replicate natural settings. “oasis of light”, a propulsive dance track with a melody as bright as it is blue, begs to be played in the shade of towering California redwoods. The slow, somber collage of jazz brass, dub reggae, quasi-folk guitar, and clamoring vocals that is “tortay & friends” sounds recorded around a campfire at dusk. Listeners can approach each instrumental as you would the natural worlds they approximate, marveling at the interplay of the elements, or focusing on one at a time.

The Inner Oceans debut from Ohio-based producer ZOD1AC, Tides is inspired by water’s awesome mutability. ZOD1AC juxtaposes bright melodies with cavernous low-end to capture the polarity of an element that can be beautiful and life-saving or horrifying and potentially fatal. On “Vapor Trails”, he pairs crisp, punchy percussion with melancholic horns for a suite that sounds reminiscent of Kenny Segal’s work with The Jefferson Park Boys (see Casual Horns, Dog). Deep low end meets keys that shimmer and scatter like sunlight on the ocean on “Stasis.” “West Side Drive” is bouncy, hard-hitting boom-bap backed by soulful samples that, with its grit and lo-fi textures, also merits comparison to Segal’s work. Tides changes as often as its inspiration, which makes it a wieldy but enjoyable listen.