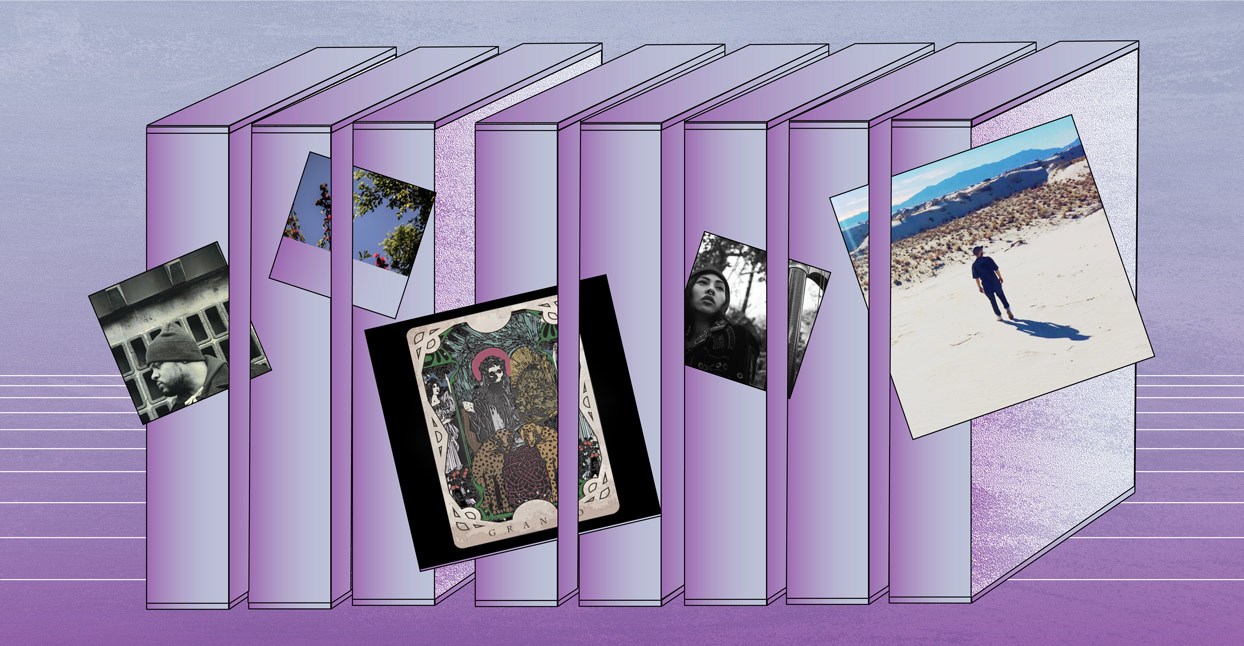 Best Beat Tapes always strives for sonic and geographic diversity. The releases below come from creators all over the world whose styles could not be more disparate. You’ll find jazzy boom-bap, a brilliant amalgam of world music and styles culled from the Los Angeles beat scene, ominous bangers crafted in Romania, soulful chops from producers in Long Beach and Atlanta, and much more.

Art doesn’t have to come from pain, but there’s a reason that tragedy (Melpomene) is one of the nine muses. Case in point: Dilla made Donuts, the nonpareil of beat tapes, from his hospital bed. Floods, one of the best producers in Long Beach, CA (see also: Dirty Merlin), continues to follow in the ancient (also read: Greek) tradition of transmuting pain into moving productions. His March album, Numb, was brilliant, emotionally arresting, and undoubtedly inspired by misery. The record’s slow, knocking beats brimmed with layers of warm and gritty textures while employing everything from the time-warping echo of dub reggae (“Fourier Transform”) to the chest-caving low end of dubstep (“Homicide”).

Floods’s latest project, Ben’s Tape, sounds vastly different than Numb. Still, the emotional core is the same. Composed and released with the intent of sending the proceeds to a friend recently diagnosed with Ewing’s Sarcoma, Ben’s Tape is a timestamped sonic journal, each entry plaintive yet undergirded by hope. These are thumping, soul-backed beats with rhythmic chops (“340PM”) and off-kilter drums. On “333AM,” Floods weaves blue vocal samples around quasi-percussive keys and a snare that smacks hard enough to induce tinnitus. “442PM,” like the more melodic songs on Ben’s Tape, builds its melody through the skilled, puzzle-like arrangement of multiple samples. Context notwithstanding, Ben’s Tape is poignant as it is hard-hitting; in context, it hits much harder.

Low Leaf is one of the many women from Los Angeles who have expanded the parameters of beat music in the 2010s. She alchemically fuses electronic beats with instruments like harp, piano, and guitar to create simultaneously tranquil and propulsive suites. Often, she uses them to score passionately sung verses about love and our place in the universe. It is beat-centric world music with an R&B bent, somewhere between Erykah Badu and Bonobo.

Her Baker’s Dozen album ranks among the most innovative in the Fat Beats instrumental series. Sans vocals, Low Leaf devotes more space to percussion, arranging congas in concert with kicks, snares, and tambourines (“O’ahu”). On “Heart Chakram” and “Distant Feathers Coalesce,” she plays the harp like Thundercat plays bass, plucking notes on top of and around unrelenting, locomotive-like rhythms. On these songs, her Baker’s Dozen record seems a response to Flying Lotus’s Pattern+Grid World. Elsewhere, she fires rounds of spaced-out, ray gun-like synths (“Innermission” and “Black Earthsong”). Toward the end of the record, on “Nu Era” and “Entrodabata,” she combines much of the above into low-end heavy beats that shuttle between the cosmos and terra firma. Given the sonic scope of Low Leaf’s Bakers Dozen, it’s safe to say that this is the most refined distillation of her sound.

OHMYGOD put their name in all caps to textually communicate the mission statement of their 2018 debut, Hurry Up and Wait (Alpha Pup): “we just make bangers fuck everything else.” G R A N D O, the sophomore album from the duo comprised of Rootnote Collective co-founder Gypsy Mamba and Romanian producer Esqu, doesn’t deviate from that inceptive aim. Released on Los Angeles label Beat Cinema, G R A N D O is another collection of diverse yet equally thunderous productions that pull from countless subgenres of beat music. Opener “Compot” is punishing yet emotive juke track with warped vocals that echo layers of sub-shaking low-end. On “Draceanu,” they deftly loop a polka sample over crushing and dynamic trap. None of OHMYGOD’s beats are timed to work in unison with pyrotechnics that distracts from a creative deficiency. The best, like “I.H.I.F.D.R.A.N” and “MK Ultra” shuttle between the portentous and the riotous. They provide the score for clubs that only have lights above the exits.

Rah Zen
Upon the Apex

Rah Zen is the backbone of the Boston beat scene. His monthly show, Nightworks, spotlights local producers who are dismantling and divining new permutations of beat music. While Zen is self-effacing and quick to applaud his compatriots, his work is an obvious standout.

Midnight Satori, his debut on L.A.-based Dome of Doom (DOD), was a dark, introspective, and semi-psychedelic record with organic and electronic textures that could still test the strength of your subs. His sophomore album on DOD, Upon the Apex, is a brilliant reimagining and elevation of that unique sound. Less meditative than his last record, these beats are still heady but better-suited for live shows. Bolstered by cavernous percussion, many songs feature beds of crawling, crackling, and popping textures. They evoke images of otherworldly creatures scaling the sides of towering redwoods turned speaker boxes, the bass vibrating roots and leaves for miles. Songs such as “Ancestor’s Call” are what you’d get if you crossed peak RZA crossed with darkest sides of Teebs. Elsewhere, Zen’s songs (“Amen Rah”) could be an alternate soundtrack to Afro Samurai, the sound of clashing steel blades accenting mantric-like breathing. And the swaying, slightly-unhinged “Snake Charmer” sounds like the score to an epic co-directed by Kurosawa and Leone.

Comparisons and figurative hyperbole aside, Zen synthesized his influences and emerged with a distinctive voice two years ago. In a field increasingly bogged down by dull, mind-numbingly mediocre “chill study beats,” his music is a candescent spark. Upon the Apex is a flare signaling the future of beat music.

When “old heads” wax nostalgic about hip-hop’s golden era, they likely privilege the beats over the rhymes. They miss the sound we’ve codified as boom-bap: fragments of funk, jazz, and soul looped and backed by drums programmed on analog machines. Luckily for these rap conservatives, there is an abundance of instrumental boom-bap on Bandcamp. Philly producer Shane Great’s Greatstrumentals Vol. 1 is the latest excellent and reverent entry in the growing modern boom-bap canon. Composed on a variety of samplers (e.g., Akai MPC2500), the beats on Greatstrumental bump and knock with nostalgia. They are the aural equivalent of black and white photos of east coast metropolises teeming with people in Carhartt beanies, Starter jackets, and Timbs. Throughout, the crisp percussion propels a variety of loops layered to aid all head-nodding. Many tracks lean on jazz samples, as does the stellar “BlindColour,” which sounds like a speakeasy that only plays Pete Rock. A swirling combination of glinting piano runs, soulful vocal samples, and sparse drums, “BlindColour” affirms what should be evident by now: Boom-bap isn’t of an era, it’s eternal.

TUAMIE
But you don’t, Hear Me Though

If you’re unfamiliar with Richmond, VA collective Mutant Academy, rectify this wrong immediately. The collective has Madlib-approved rappers (i.e., Fly Anakin) and a coterie of innovative producers like foisey, Ohbliv, and TUAMIE. Based in Atlanta, TUAMIE is as prolific as he is unique. He’s absorbed the drumming styles of Pete Rock, Madlib, and the like and created a style that remains swinging and fluid even at its most halting.
If you’ve never listened to TUAMIE, start with 2016’s The Gift: Volume Four, which was executive produced by DJ, producer, and esteemed beat scholar House Shoes. Then, play his latest: But you don’t, Hear Me Though. Over 16 tracks, TUAMIE flexes his range while retaining his voice. On “Lost my joy for nothing” and “Whos Boo,” he showcases one of his signatures: pairing subtly complex drum patterns with plaintive R&B vocals pitched to increase their emotional resonance. “Lemonade” is modernized boom-bap, the crackle of needle-to-record and the sample from rap’s most famous eye-patch-wearer backed by drums that sound like they were sampled from grimy New York basements. And “Parking Spot Crisis” is an earworm of a precise vocal chops and plosive drums that smacks and will stick with you for days. There’s more, but you should hear it instead of reading about it.