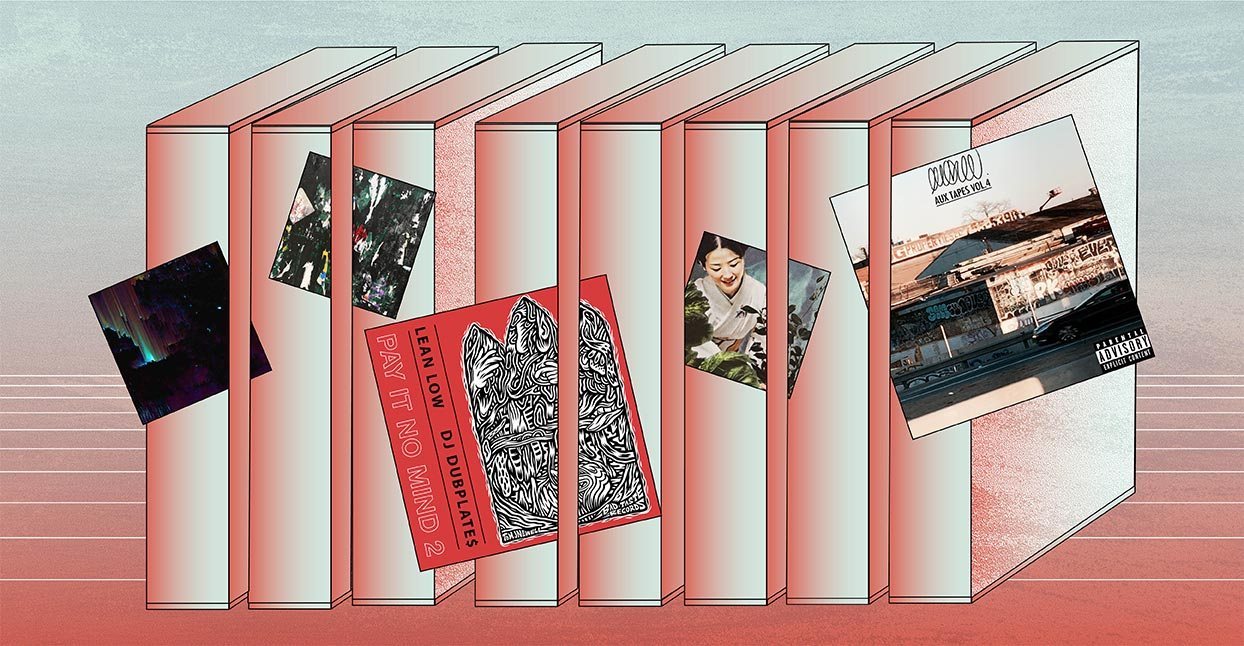 Fans who prattle on and on about the virtues of “real hip-hop” frequently overlook how the genre is fluid, forever in the process of evolving and in conversation with the past. Nevertheless, there’s something deeply engrossing in the interplay of elements driving hip-hop culture, and by extension, certain styles of rap music. In my mind, composing and admiring graffiti is best when soundtracked by beats that evoke the sound of ‘90s New York, the era scored by Premier, Pete Rock, Large Professor, and other crate-diggers turned MPC alchemists. New York producer ewonee. shares my belief. Aux​.​Tapes_Vol​.​4 is the soundtrack for admiring trains-turned-mobile art galleries, for those spraying vibrant and intricate murals on otherwise bland slabs of concrete in the dead of night. These are mellow but banging beats, the booms and baps girded by fragments of jazz and soul and the warmth of tape hiss. Find the DayGlo alleyways in your neighborhood and press play.

Lasso
The Sound of Lasso

Before he decamped to his home state of Michigan, Lasso was in Arizona working with Mello Music compatriot Lando Chill. On records like Chill’s Black Ego and Madera Canyon, Lasso used live instruments to create unique, genre-blending beats that would make Adrian Younge melt. G-funk, southern-fried slaps, lush and electronic soul—nothing was out of his wheelhouse. Before that, he released close to a dozen records, some of which warranted favorable comparisons to Flying Lotus and Black Moth Super Rainbow’s Tobacco (see 2017’s The Lasso). In short, Lasso can jump in and out of any genre without sounding like he’s parroting the most revered practitioners.

For The Sound of Lasso, Lasso recruited 13 musicians and made one of the most gorgeous instrumental records you’ll hear this year. Like his previous efforts, The Sound of Lasso defies categorization. Maybe it takes someone who knows the scorching summers of Arizona and the blistering winters of Michigan to create a record  that so deftly manages vastly different moods and a variety of instrumentation (e.g., piano, synths, guitar) and genres.

“Respiration” is pure awe, the score to a visually-stunning documentary on luminous bottom-dwelling fish. Here, alternately spacey and funky synths glide around and slice through rattling percussion. On “Portraits,” he weds clipped and percussive notes on the acoustic guitar with plaintive saxophone, ghostly electric blues, and shimmering keys. “Saturn” is freaky, futuristic jazz played straight and warped all while backed by off-kilter drums. It’s what should’ve played inside that Black Lodge on Twin Peaks. And “Closer” is a skittering and ethereal head-nodder that splits the difference between Teebs and Flying Lotus. For the sake of space, I’ll end the track breakdowns here.

The Sound of Lasso will never sound dated. It’s in dialogue with too many styles of music to list. We are lucky to be party to the conversation.

Three 6 Mafia were ahead of their time in every respect. Without them, there would be no Raider Klan, no Seshollowaterboyz—the list goes on. London producer Lean Low and L.A.-based DJ Dubplate are equally indebted and reverent to the eerie Memphis funk (or phonk, if you prefer) that DJ Paul and Juicy J created to score their lurid and ribald narratives. The sequel to 2017’s Pay It No Mind, Pay It No Mind 2 avoids paint-by-numbers pastiche. It is an homage that preserves the funk and cleaves to Paul and J’s slower, low-end heavy beats, while working in sounds (chimes, lilting horns, yacht-rock-esque melodies) which move the mood toward one of repose. The sparse yet crushing “MXL” resembles trap of the 2012-2013 variety—the electronic-rap hybrid that TNGHT elevated—but that’s the only anomaly. For the most part, these are relaxed, slightly menacing slaps for those who prefer cruising toward creamsicle sunsets to dank, riot-ready clubs and fog-shrouded graveyards. Not that there’s anything wrong with the latter.

According to my limited Internet research, the convenience stores in Japan (konbini in Japanese) are vastly superior to those in the U.S. Mayaewk’s Konbini is an ode to those convenience stores: those Pinterest-perfect spreads of food, smokes, magazines, liquor, and more available long after most businesses have closed for the night. Composed amid the twilight hours after a series of gigs in Japan, the songs on Konbini capture the somnambulant feeling of being physically exhausted but mentally wired. These are relaxed but propulsive beats that deftly wed samples from old Japanese records with lo-fi rap production; as such, they evoke not only wistfulness, but a palpable joy for the present. All said, Konbini could easily score an anime or provide the soundtrack to an indie film set inside a Lawson or Family Mart. If someone scoffs when you say the word “lo-fi,” just play this.

If you divide the L.A. beat scene into classes, Shlohmo occupies that liminal space between the freshman and sophomore cohorts. After absorbing the innovations of foundational stars like Flying Lotus and Nosaj Thing, he released a string of promising EPs. 2011’s Bad Vibes announced the arrival of a singular talent to those in and outside of the insular beat community. In addition to brilliantly pairing ambient noise with clipping percussion and soft guitar riffs, he turned processed vocals into alternately tender, moody, and cutting instruments. Bad Vibes remains the beat scene’s greatest breakup record.

In the wake of Bad Vibes and several rightfully-lauded solo efforts (e.g., 2013’s Laid Out), he made forays into R&B and pop, working with everyone from Jeremih (see “Bo Peep”) to (lamentably) Post Malone. The End, his first album in five years, showcases a darker evolution of his previously-established sound.

A divided album, The End begins by trading the melancholy and sensuality of Shlohmo’s earlier work for harsher, guitar-dominant suites. The blend of swirling atmospherics, aqueous percussion, and aggressive, Billy Corgan-esque chords on album opener “Rock Music” create a track that’s as grand as it is ominous. It’s the aural equivalent of glowing, red-orange lava bubbling away over the lip of a volcano, the first cavernous crack in a pristine, blindingly white ice shelf. Throughout the first half of the album, Shlohmo weaves alternately whining and grinding guitar between beats in ways that wouldn’t sound out of place on a record from Alpha Pup mainstay Toy Light.

The second half of the record is a more portentous and thundering follow-up to Bad Vibes, especially on tracks like “We Sat in the Car” and “The Best of Me.” The footwork/juke rhythms on “Panic Attack” and bouncy yet dour “By Myself” don’t necessarily work in context, but they’re excellent nonetheless. By the time we hear the glinting, soft, and reverberating chords of album closer “Still Life,” it’s difficult to decide whether Shlohmo wants us to view The End as a journey toward the light in dark times or the soundtrack to the ever-impending apocalypse. Ultimately, neither answer works. That’s probably the point.

For the second year in a row, Inner Oceans Records recruited Australian producer Sadiva to curate their Women of the World (WOW) compilation series. Like the first compilation, all profits from WOW Vol. 2 go to Share the Dignity​, an Australian charity that provides aid to homeless women and victims of domestic abuse. This iteration features 50 tracks from 50 different producers. (The first volume featured 29.) Once again, Sadiva deserves all commendation for finding dozens more women producers, as only a handful of producers who appeared on WOW Vol. 1 return.

Words are insufficient to encapsulate all the uncanny, excellent permutations of beat music heard across WOW Vol. 2. That said, I can tell you that you will find jazzy, chop-heavy boom-bap (RyNea Soul’s “Jazz Rain”), a gorgeous and shimmering electronic suite that shuttles from hip-hop to house tempos (Jillesque’s “Slow Ya Roll”), and a moving, downtempo R&B flip (Audio Samurai’s “loveofmylife”). I can also tell you that the percussion on Brown Jewel’s bluesy and soulful “How Will I Know” knocks harder than an avalanche of tin trash cans, or something. In short, listen to WOW Vol. 2 because compilations of entirely women producers are too rare and because the beats rival or best the work of their male peers. Donate to women’s causes whenever and however you can.