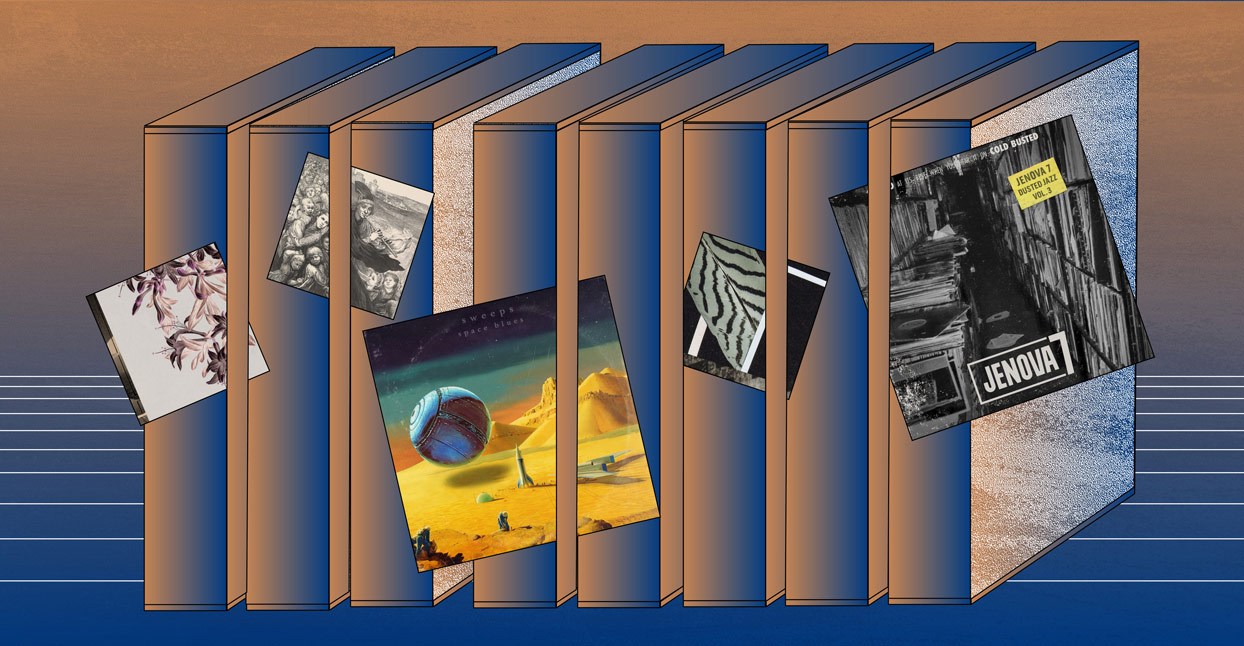 August’s Best Beat Tapes column features several tapes that reimagine attempted but not-always-successful genre pairings. There’s off-kilter hip-hop paired with chopped and warped R&B samples; a trip-hop record that pulls from breakbeat and too many genres to list; an unparalleled fusion of doom-filled rock and slow, sometimes muted beats that still crush; a tape that creates a sci-fi epic by fusing blues and hip-hop. As always, there’s also much more.

There’s a thin line between sloppiness and style. Canada-born, Tokyo-based producer Fitz Ambro$e has walked on the better side (the latter side) of this divide for years (e.g., 2017’s Doe Quarterz). His latest, Creative Network,is a collection of artfully lax beats that combine his affinity for rap and R&B of bygone eras. On “Like What You Do,” he chops alternately breathy and husky male vocals over a halting thump, with the drums landing behind where one might expect. Listening is almost like watching two music videos rhythmically jump between playing and buffering. “Lakes” channels early 2000s R&B—gilded with squealing G-funk synths, a Craftmatic with red silk sheets hydraulically bouncing on white walls and gold Daytons. Ambro$e’s unique iterations on off-kilter and downtempo beats persist on the quasi-screwed “No Rush” and the thumping quiet storm of “Temperarily” [sic]. It takes years of dedication to seem so nonchalant and so polished simultaneously.

Trip-hop was essentially the “lofi” of the ‘90s. Critics rightly heralded the most innovative artists for finding the parallel sonic threads between genres like rap, soul, dub, and rock and weaving them together. But for every groundbreaking album from artists like DJ Shadow, Portishead, and Tricky, there were scores of mediocre imitators whose work didn’t make the cut for Mo’ Wax and Ninja Tune. Music journalist Laurent Fintoni describes the music made at the tail end of the ‘90s as “limp, often stoner-friendly, coffee table hip-hop beats.” (Sound familiar?) Jenova 7’s Dusted Jazz Vol. 3 is excellent contemporary trip-hop with occasional lo-fi (not “lofi”) leanings. It’s downtempo and chill, not “chill study music.” There are too many sounds from too many genres, too many departures for anyone to get lulled to sleep. The shuffling beat on “The Chiaroscuro Killer” eventually gives way to bluesy psych-rock. “Coffee Stains” is breakbeat meets Blaxploitation funk/soul. The dusty thump of “Starship Neverland,” with its laser-like blips and warbles, has the sloppy swing of the best lo-fi beats programmed on electronic samplers. Skip the “lofi” playlists and create one with tracks from Dusted Jazz Vol. 3 and those from trip-hop contemporaries like Moderator and Brock Berrigan.

If Backwoodz Studioz didn’t announce that Kenny Segal produced Hiding Places — the excellent, much-ballyhooed album from the incisive, irascible, and forever incognito rapper Billy Woods — we might never have known. Segal beats seldom sound alike. (Segal devotees would’ve recognized, though, that “a day in a week in a year” was originally “bib [swisher edition]” on Kenstrumentals Vol. 3: Travelog.) His songs with Busdriver (“MUCH”; “Worlds to Run”) are wholly unlike his records with Open Mike Eagle (“No Selling”) and milo (so the flies don’t come and part of who told you to think​?​?​!​!​?​!​?​!​?​!). Yet every Segal-produced track bears his singular aesthetic imprint. Dark, whimsical, somewhere in between, his beats sound dreamlike, almost nostalgic. The hiss and crackle, the looping and layering of organic instrumentation—they’re distinctly him. His drums smack—and smack of bygone eras. Every element of his sound is out of time and ahead of it.

Hiding Places – The Instrumentals allows us to appreciate Segal’s most dour beats to date. (They would have to be to match the bleakness of Woods’ lyrics.) Most (and the best) brilliantly blend rap and rock. The loudest chords on “spongebob” are full of doom, early Sabbath layered over slowed, clipping percussion and keys that beckon and haunt like a half-broken music box. It’s creepy and intriguing yet ominous, the sound of walking through a Tim-Burton-like woods as parts of it burn. “steak knives” is the score to a dystopic Western, Blade Runner meets The Road soundtracked by snaking guitars and echoing percussion that could’ve been siphoned from Lee “Scratch” Perry. “check points” is Zeppelin combined with Segal’s more muted sensibilities, the guitars softer but the drums crashing just as hard as they do on “When the Levee Breaks.” And these are only the first three tracks! Articulating the nuances and different iterations of this particular sound Segal puts forth would require many more words. Merging rap and rock is dicey, but on Hiding Places – The Instrumentals, Segal succeeds where Limp Bizkit, Lil Wayne, and countless others fell flat.

Samiyam
one on each planet

A new samiyam record always calls for celebration. The release of one on each planet, however, comes with a profoundly sad context. Released just days after the death of Ras G, the album’s August profits went to the family of samiyam’s friend and LA beat scene peer. If you know that the cover image is the view from G’s studio (aka Spacebase), you understand the depth of samiyam’s sadness. It begins with a loop of someone singing about “fading away” into “the sun’s blinding ray.” From there, he communes with the deceased through bone-atomizing bass and skull-cracking drums. “inflatable raft” and “thriller” are southern trap slowed and spaced out, the sound of lean imbibed from a lava lamp while the slab levitates and its trunk rattles endlessly. “u ever been to an island?” glides to shimmering synth chords, but the bass rumbles as off-kilter drums knock you off balance. The titular coda is a dirge, the bass deeper than anywhere else, resounding from our smoldering blue-green rock to whichever planet G has chosen to inhabit next. one on each planet is grief and celebration, the acknowledgment that art binds us and helps continue when those bonds are mortally severed.

Spectacular Diagnostics
WHAT WAS WHAT?

If Griselda Gang ever need another producer outside of stalwarts like Daringer and Alchemist, they should call Spectacular Diagnostics. The Chicago producer has a gift for the minimal, ominous beats that pair well with the felony-ridden rhymes of Westside Gunn and Conway. Case in point, “Caviar Sandwiches,” the opener from Diagnostics’ WHAT WAS WHAT? A sensual female voice loops over piano keys that glint like the steel barrel of a .45. It’s dark but high-class, the hit executed in a five-star restaurant. You can imagine Tony Soprano lighting a cigar to it, or Joe Pesci pistol-whipping someone. The same is true of the slightly bluesy “Midnight Movements,” though the percussion sounds more like DJ Shadow circa “Midnight in a Perfect World.” Diagnostics’ varied percussion elevates WHAT WAS WHAT? beyond rapper-ready fare. “A Needed Break”, for instance, could’ve just been a loop of sweeping strings with a kick and snare. Instead, we get an almost tropical-sounding beat beneath it. He’s working within an aesthetic, while expanding its limits at the same time.

Hip-hop producers have sampled soul music for decades. Yet blues—an inextricable strand of soul’s aural DNA—remains underused. Maybe it costs too much to loop a few seconds of Howlin’ Wolf’s guttural, raspy cries. Maybe Muddy Waters riffs don’t resonate. Maybe BlakRoc sounded better in theory than it did with late-aughts RZA verses. On Space Blues, Boston producer Sweeps acknowledges and disregards precedent. He mines soul and blues in equal measure, scoring the layered intersections with knocking drums. “willie’s march” is arguably the greatest synthesis, as Sweeps weaves the stirring twang of bent strings between gospel organs, handclaps, and tinny percussion. The kicks have the same stomp as the best bluesmen. You can almost see clouds dust rise from beneath a worn leather boot. At times, Sweeps nods to predecessors who perfected their iteration of soul-sampling beats. The grand “summer night’s ball” verges into Ski Beatz territory a la Uptown Saturday Night; there aren’t any chipmunk-pitched vocals, but the strings and chops on “bang!” hew close to the sound of The Heatmakerz. There are some sonic elements we associate with space (see the laser-like trills on “honorable mention”), but Sweeps keeps those stereotypical touches light. In this respect, Space Blues is a reminder that we have no idea how the cosmos sounds. We need more inventive interpretations like this one.