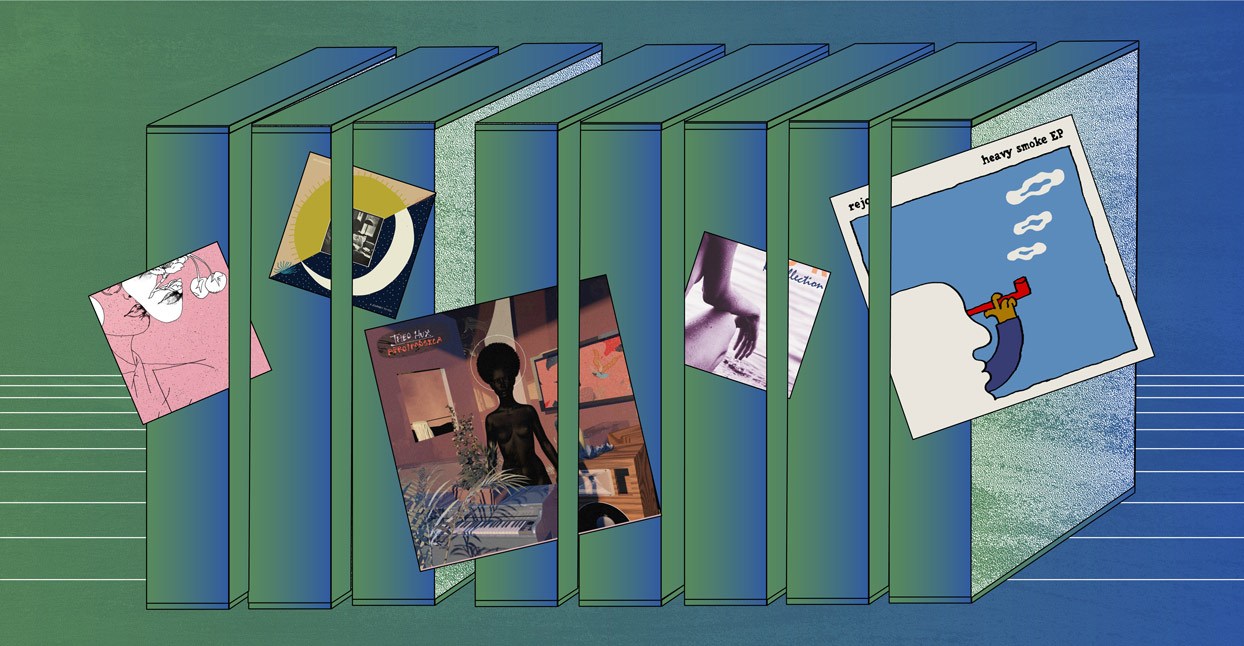 This month’s installment of Best Beat Tapes showcases several records that challenge the traditional definition of a beat tape, skewing closer to jazz and soul than traditional hip-hop instrumentals. We’ve also got an incredible batch of skull-cracking instrumentals from one of the greatest hip-hop producers of the 2000s, electronically-inclined beats that incorporate everything from samba to cumbia, and a tape full of brilliant chops and dynamic percussion from a rising Bay Area producer.

You know an Alchemist beat when you hear one. Over his two-decade-plus career, the veteran producer has balanced his formidable range with an indelible imprint. His most representative beats conjure images of grimy bodegas clouded by indica smoke and spiked baseball bats dripping with arterial red. Their menace hangs heavy, even before the rapper(s) spit a bar. Rappers Best Friend Pt. 5 marks the latest in a line of releases compiling beats Alchemist has gifted to esteemed collaborators. Its contents pulse with that same, foreboding undercurrent. Several of the beats here enhanced the grim gun-toting, dope-dealing narratives of Griselda Gang and their stylistic kindred (e.g., the late Sean Price), but you don’t need to hear Benny the Butcher on “Broken Bottles” to feel like someone is about to have their skull crushed with a pair of rubber-soled Timberlands. Other beats, while still ominous, have evoke sci-fi (i.e. “224 May Block”) and unhinged psychedelia (i.e. “Rubber Bands & Weight”), harkening back to Alchemist’s Gangrene releases. Occasional aberrations aside (see the dragging, horn-laden jazz of “Canary Rhombus”), these tracks fit squarely within the icon’s ever-growing catalog.

The Bay Area producer behind 2018’s gorgeous Wildflower, pax has a gift for giving mellow instrumentals a poignancy that other “lo-fi” beats lack: The emotional elements of his craft never come across as sleepy, making him a rarity amongst his peers. Cherry[b] finds pax moving away from Wildflower’s guitar-centric and ambient productions, with a heavier focus on vivid instrumentals and off-kilter percussion. On “mycrushsucks,” he manipulates sultry female vocals over a rich bed of piano, halting drums, subdued synths, and tidal ambience. A similarly dire mood hangs heavy over “how,” which employs clips from the 1944 film noir Double Indemnity; with or without Fred MacMurray’s voice, the melancholic guitar melodies and crisp drums paint it as a faithful homage. Elsewhere, on “just,” pax displays just how well he can chop, resulting in a jagged rhythm that trips over itself, hobbling along as though one of its legs is asleep. Even with that frenetic bit of showmanship, pax works in a piano loop in a way that makes the instrumental almost feel tender. This is pax’s greatest gift as a producer: creating stirring suites where others would have only seen a banger.

Es-K is a Vermont-based producer who’s as prolific as he is consistently excellent. Since releasing Koan last year, he’s dropped at least four respectable, standalone projects, rounded out this month by ReCollection, a sprawling, diverse collection of 24 instrumentals. A beat tape in the most rigid sense of the term, you can hear Es-K’s reverence for the dour, jazz-inflected boom-bap associated with ‘90s titans like Da Beatminerz on tracks like “Hydrgn” and “Ntrgn.” More than anything, though, ReCollection illustrates two of Es-K’s greatest strengths: his use of space and his facility for groove. Take “Ptssm”: by allowing ample breathing room before the snare, he ensures that the track’s low-end resonates, while simultaneously powering its off-kilter swing. Another standout, the bright, George Benson-eque “Chrmm,” works as a tonal contrast to Es-K’s darker, more meditative beats; the way Es-K manipulates the sample of bluesy jazz guitar creates an infectious groove. Like many of the beats on ReCollection, it’s a shame it ends so soon.

With each new project, pianist/producer Kiefer narrows the divide between jazz and instrumental hip-hop. To call any record he’s done a “beat tape” would be to short-sell his skills on the piano and his extensive jazz background. On the other hand, to say that his work is wholly jazz would negate the influence of Dilla and other musicians. Perhaps that’s why Kiefer titled his latest project Bridges. In addition to alternately bright and melancholy (also read: happysad) improvisational runs on the piano, Bridges incorporates analog synths for an additional layer of compositional complexity. Whether it’s the subdued funk of “Orange Crayon” or the wistful jazz of “Island,” the deep synth-bass tones make each arrangement feel fuller. While much of Kiefer’s previous work accounted for the low-end with concussive kick drums, the synths do an equal share of the lifting here. It will be fascinating to hear the next evolution of his jazz-hip-hop hybrid.

Theo Hux blew me away at Beat Cinema’s 2018 Beat Battle. (To wit, he made the roster for this year’s Beat Battle, too.)  I don’t remember the exact beat(s) he played—there were a lot of them that night—but I followed him on Bandcamp immediately after. Since then, the producer’s co-founded a burgeoning beat night in his native Los Angeles (Hollywood’s Late Night Lo-Fi), and released the brilliant Afro/Música. This is Afrobeat, samba, cumbia, funk, soul, and more, filtered through the mind of a producer who’s absorbed years of the forward-thinking beat music emanating from L.A. and beyond. Hux handles his source material insidiously, winding in and around the borrowed rhythms in order to bend them to his will; the samples on “Baixa” and “Stnt On My Wii U” seem tailored for Hux’s beats, as opposed to the other way around. That the vocal sample on “La Da Di” is so hard to place is just more evidence of his protean talents. By deftly filtering and manipulating the clip over punishing electronic trap, he not only flips it, he makes it his own. Whether he’s fusing these instrumentally rich samples with house (“Samba Casa”), trap (“Memphis Area (Audi)”), or something else, Hux makes each track knock. Listen to Afro​/Música as loudly as possible.

melodiesinfonie
A Journey to You

Swiss producer melodiesinfonie (pronounced “melody symphony”) has been working toward an album like A Journey to You for years. His earliest releases (e.g. Wohlklänge and Friede Freude) took the thumping, Dilla-influenced beats that SP-404 alchemists like Dibia$e and Samiyam played at Sketchbook (RIP) and Low End Theory (also RIP), and reworked them for a jazz lounge. If you’ve listened to his loosies over the last few years, you’ve heard him gradually incorporate more live instrumentation and move closer to jazz-imbued soul. A Journey to You is the culmination of melodiesinfonie’s evolution, a mostly instrumental album of downtempo soul-jazz rooted in deep grooves from around the world. Though broad in its sonic scope, A Journey to You feels cohesive. The sensuous neo-soul of “Light,” the flute-driven “Tropicololo,” which could be a B-side on Bonobo’s most infectious records, and the blue, piano-heavy samba of “Keep on Searching” coexist beautifully. Primed for after-hours clubs as much as it is dimly-lit skating rinks (see the funky, synth-laden “Peace on Earth”), A Journey to You is a “beat tape” that combines so many genres and styles of music beat-centric music that it could fit comfortably in any one of our monthly genre columns.

An artist never sheds their influences entirely, but synthesizing those influences to create a unique sound takes time. Tel Aviv producer Yuvi Havkin, aka Rejoicer, who runs the label Raw Tapes, has invested those hours. His Stones Throw debut, Energy Dreams, while excellent, was noticeably indebted to the last decade of L.A.’s beat scene, with shades of everyone from Nosaj Thing to Thundercat. Not so with his new EP Heavy Smoke, a brief excursion through his new, more downtempo sound. Here, Rejoicer uses the synth to evoke images associated with the cosmos, deploying alternately quick and elongated, lazer beam-like notes and chords. He also calls on a wide array of percussion. On “Heavy Smoke,” he uses samba rhythms and a lone, concussive snare drives on “Five Winds.” A cohesive, carefully considered record, Heavy Smoke warrants dozens of focused listens.