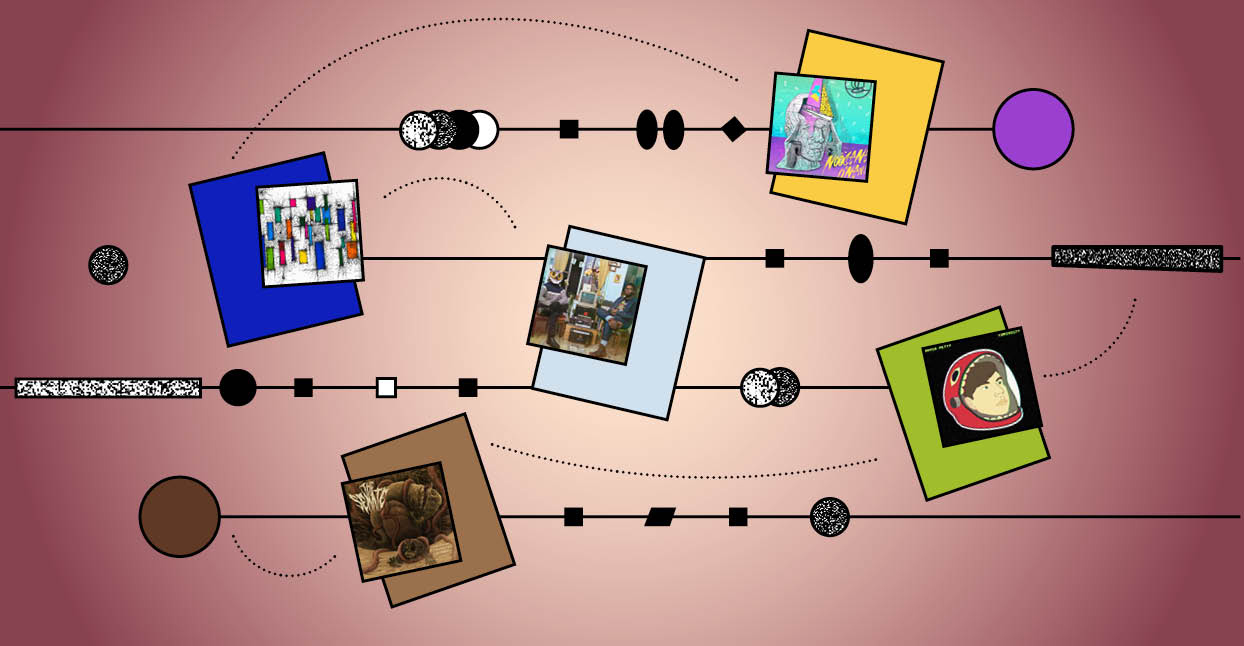 When the weather is no longer oppressively hot, I like to take the dog for a walk in the woods. After a few minutes of walking, you can almost reach a point where you’re surrounded only by nature—as long as you ignore the garbage left behind by developers determined to turn the woods into townhouses. But if you turn your back on that human intrusion, you can—if only for a moment—feel a tranquility that comes from being a part of nature (and knowing the way back home when you’re ready to leave). Our trail begins this time with an album that serves as an excellent soundtrack to these walks.

Gondolin Records’ catalog is filled with artists who push the boundaries of “dungeon synth,” including styles like neoclassical, experimental, and ambient. Old Glow’s second album embodies this expanding palette of influences, beginning with a dirge-like composition comprised of brass voices, and adding more unexpected but welcome elements along the way. There are unearthly choirs, melancholy plucked strings, passages that evoke Aguirre-era Popul Vuh, and percussive elements that tie everything together.

Among others, Old Glow uses the #neoclassical tag for their work. It’s a genre that I’m mostly unfamiliar with—and I should really work to change that, because it’s full of excellent releases. Hector Murrieta’s album from this summer is one of them.

The potential of the electric guitar is vast, although most mainstream players are content to use it in conventional ways. There’s nothing wrong with that, but it’s also inspiring to find an artist who does away with literalism and works to expand the ways we think of this foundational instrument. Mexico City guitarist Murrieta creates worlds with his improvisational compositions. Some, as in opening piece “Articulated Spaces,” are creeping and ominous, evoking dark places and unseen perils. The delicate, crystalline sounds of “Infinity In Finity,” however, hang bright and sharp.

In the #electric guitar tag, the guitar isn’t always the central focus; sometimes it just shows up to provide a solo for a dance track.

Everyone loves Star Wars, but Deadvader go deep, naming their album after the planet that was the home of the Galactic Empire. A place so large would unquestionably have a thriving underground rave scene, and it’s not hard to imagine Deadvader as one of that scene’s top acts. These three tracks from the hardtrap-inspired French producer go hard. Crescendos that build anticipation pay off with thunderous bass drops—sure to get crowds across the galaxy on their feet.

Obviously, Deadvader is going to use the #star wars tag, and several more artists out there are making use of it as well. Most genres you can think of are represented; let’s go for brutal death metal.

The Senate
Tales From A Galaxy Far, Far Away

Far from the sleek clean lines of space stations and command ships lie the dirtier, more chaotic parts of the Star Wars universe. These are the parts in which nightmare creatures like the Sarlacc dwell. These wretched hives of scum and villainy are celebrated by Australian death metal band The Senate. Casting aside themes of heroism and triumph, The Senate celebrate the dark side—not just in Star Wars mythology, but also in the literal sense, creating guttural odes to the monsters and criminals who lurk in the shadows of this beloved fictional world. Updating the turn-of-the-century “brutal death metal” template, this album is filled with blast beats, rubbery riffs, and gurgling vocals. If the creature that lived inside that Death Star garbage compactor started a band, it would probably sound like The Senate.

It’s not a far jump from Jabba’s palace to the more generalized #sci-fi tag. Many artists under this tag are creating music inspired by the genre’s celebrated authors. But some of them are writing their own stories instead.

The emotional complexities of being an astronaut marooned in space makes for a compelling concept, as countless films and books attest. Given the heady subject matter, you might expect to hear analog synth and/or intergalactic prog when you press play; but Olympia, WA’s David Petty opts to tell the story through indie pop. The early songs are upbeat, reflecting the hope that our protagonist might initially feel. It’s easy to imagine them thinking, “I’ll just hang out here on this planet for a while. Someone’s bound to come get me.” But that optimism quickly fades. By the end of the album, Petty’s songwriting has taken a decidedly melancholy turn, as his protagonist accepts the inevitable. It’s a journey worth taking—especially knowing that we, unlike our astronaut friend, get to go back to earth at the end.

Who doesn’t love a good #concept album? Some are literal and immersive, but some, like our next stop, are less linear. Regardless of the level of abstraction, a well-crafted concept can lead to stunning music.

Some of the best ‘zines are the small cut-and-paste ones, the kind where the editor just grabs a handful of interesting images, a collection of ephemera from their life, and lays it out accompanied by personal essays and passing thoughts in a stream-of-consciousness style, leaving the reader to wonder where all of this came from—and when it’s going to happen again. JayWood’s Time is the audio equivalent of this experience. He takes a handful of musical styles and influences (dreamy pop, dance floor-ready funk, angular post-punk) and lays them out to accompany his lyrics, which are at turns insightful, funny, and charming.

Although it spans multiple musical moods and styles, one of the tags for Time is #shoegaze, a sound which has proven to have more lasting influence than any of the fans or musicians of the genre in the late ‘80s/early ‘90s could have imagined.

These three tracks are swirling maelstroms of noise and distortion. The shimmering, distorted guitars sound at times more like brass instruments, and the group meticulously constructs cathedrals of feedback. Casting aside the more overt pop influences of their shoegaze contemporaries and predecessors, kinoue64 use the conventions of the genre to create something meditative. There’s beauty and intricacy to be heard among the roar, and new layers of these dense recordings are slowly revealed with each listen.

Before we get hemmed in by hyper-specific genre tags, we’ll take a huge step back and focus on kinoue64’s home country of #Japan. This obviously gives us a lot more to choose from, but it’s a good way to re-focus before we continue on our journey

After putting down musical roots with his work during the mid ‘70s in Far Out and Far East Family Band, Fumio Miyashita left psychedelic prog rock behind and went on to become an incredibly important figure in the world of ambient music. This is the first in a series of re-issues from his vast archives by Brooklyn’s Personal Affair label. Based on Miyashita’s scholarship in the field of music therapy, this album is quiet and serene, equally suited to a daily meditation or as it is to less spiritual everyday activities. The delicate synth patterns on WAVE Sounds of the Universe create vast landscapes in the mind. The experience is relaxing, calming, and endlessly fascinating.

Miyashita describes his work as #healing music, a genre that features mostly new age musicians—as well as a parade of scamps and rascals using the tag sarcastically. There are a few works, though, that don’t fit neatly into either of those categories.

This album defies expectations. The artist name, album title, cover, and even the first half of the first track could easily lead you to believe that this is fairly standard vaporwave. But if you’re reading this, you know that you’ve always gotta look at the tags. “Vaporwave” isn’t even listed down there, and it shouldn’t be. These are original compositions having more in common with contemporaries like Euglossine than with the【Ｗｉｄｅ Ｔｅｘｔ】/ bust of Helios crowd. There’s so much variety here. The title track is a club-friendly modern take on ‘90s techno, while “Acid Reign △” has a more post-apocalyptic synthwave feel. By not easily fitting into any well-known and established style, Ｎｏö ☾ｅｎｅ O’Ｎｅａｌhas created a work that is at once familiar and innovative.

The otherworldliness of 介意水手 MIND SAILOR makes it a solid fit in the #alien tag. Within this tag, we also find a work concentrating on a more interactive alien experience.

The game Alien Squatter is described by its developer as an RPG in which the player takes on the character of an alien trying to survive on an Earth that has become “a cesspool of pollution, urban decay, and economic inequality,” and it certainly has the right music accompanying it. Bag of Dragonite’s sparse, minimal synth soundtrack enhances the feeling of loneliness and isolation, while keeping things just kinetic and hopeful enough to drive things forward, perfect for a game that tempers its bleak story with just enough levity.

Ending on a dystopian future where humans face a rapidly approaching extinction is a long way to travel from our beginnings with a simple walk in the woods, especially when you consider all the places (Coruscant, the depths of space, Japan) that we’ve explored along the way. Part of the joy of exploration is setting out with no marked path; you find a lot more interesting experiences without a plan. We should do this again sometime…