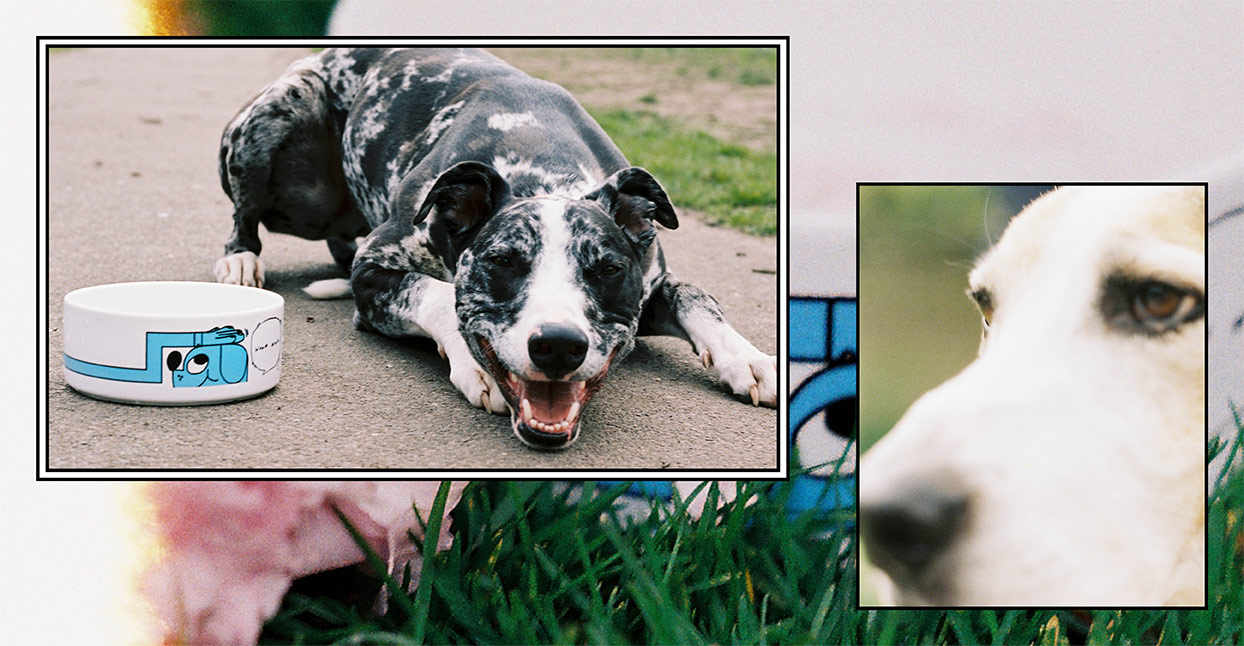 PLZ Make It Ruins is a London-based dance and electronic label that makes it a point to create limited edition merch for their discography, often drawing inspiration from the title of the record or the artist’s persona and attempting to translate it to a physical format. The approach has resulted in some truly idiosyncratic offerings. On the label’s Bandcamp merch page you can find self-help posters and USB drives shaped like pastilles (“Designed to deal with even the most rigid of chakras”), 40-oz beers with custom labels (limited to 10, very sold out), and a “fortune cookie” box containing a single download code and “a proverb for the listener’s rumination.”

Recently, however, PLZ Make It Ruins created a charming piece of merch aimed at a market that’s been historically underserved by the music industry, but one that’s beloved by both the internet and humanity in general: dogs.

Though it’s unclear whether or not dogs actually enjoy listening to music, it is safe to say that all dogs love to eat. Thus the Woof Woof dog bowl is an inspired way to both support independent music and make your pup happy at the same time—a hypothesis we very scientifically tested by letting a group of London doggos take the bowl for a test run, the photographic results of which you can see here.

The idea to offer a dog bowl was the result of a brainstorming session between PLZ Make it Ruins label owner Joe Thornalley (who records as Vegyn, and also boasts production credits on Frank Ocean’s Blonde), ARTHUR, and Amado. “We were trying to think of the funniest thing to go alongside the project,” says Thornalley. “ARTHUR’s album title ultimately helped guide us toward the dog bowl. We laughed a lot coming up with ideas for this project.”

Though not as bookish as some of the label’s previous merch items, the Woof Woof dog bowl fits squarely into Thornalley’s larger philosophy about merch: “Music is so diverse and wide-ranging, I feel like the products reflecting a project should help continue the narrative of the album. I see it as an opportunity to create something fun that hopefully also catches people’s imagination.”

The uniqueness of PLZ Make It Ruins’s merch items, as well as their extremely limited availability, does mean that they often sell out, which Thornalley feels only slightly bad about: “Ultimately, I have no intention of arbitrarily limiting the quantities of the products. However usually the more specialized an item is, the more time consuming its design and manufacture can become. I would much rather everyone get a copy of something if they want it, but at the same time: you snooze, you lose!”

When asked if his own pooch had any feedback about the Woof Woof dog bowl, Thornalley responded: “My parents have a very funny German Shepherd and she certainly enjoys food being poured into the bowl. However, I’ll have to ask her for her thoughts on the aesthetics next time I see her.”