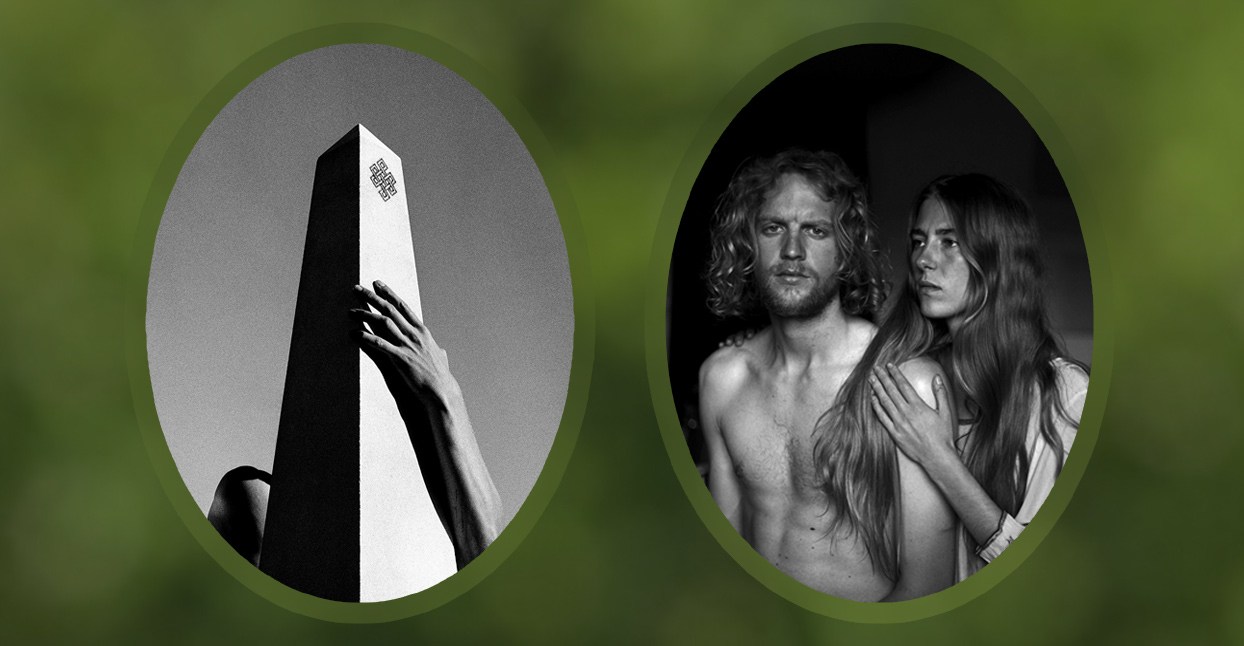 Imagine yourself in Wales, wandering alone in a remote, mountainous region rich with ancient secrets. As you take in the eerie sights and sounds of the misty landscape, you catch sight of something odd looming in the near distance.

Of course “odd things looming in the distance” aren’t unusual in this part of the world, which is famously replete with monoliths, stone circles, and hill figures etched by people whose histories pre-date written language. But the smooth structure with the pointed top you’ve spotted isn’t a standing stone or a burial mound. It’s not the work of ancient Welsh people. It’s not even old.

What you have discovered is an obelisk—a real one—conceptualized, commissioned, and placed in a mysterious locale in Wales by musical duo Samana. Rebecca Rose Harris and Franklin Mockett chose the ancient (and very not-Welsh) shape to actualize the inspirations behind the meditative psych folk of their latest record, Ascension. Made of limestone and emblazoned with an ancient Sanskrit symbol, the obelisk is the very same as the one pictured in Acension’s album art. If you wish to see the obelisk live, great news: the band has created a limited-edition map to its secret location included with deluxe editions of the LP.

“Beyond the ideas explored in the album musically, we wanted to create tangible dimensions in which to bridge the gap between music and fine art, in an attempt to create an all encompassing world that creates an entirely idiosyncratic experience. The map is but a passage to this world,” explains Harris.

Communing with the natural world is something Samana value deeply in their artistic process. “We both obtain huge inspiration from the wisdom that is nature. We take long walks every day through the old forests that surround our house and enjoy hiking to ancient remnants that scatter the coastlines of Wales,” says Harris.

To that end, the band undertook the challenge of transporting and siting the meter-high obelisk themselves. “It took one day and one night of battling with the elements to erect,” Harris remembers.

Though they remain tight-lipped about whether or not any intrepid fans have followed the band’s map to its pointy end, Harris was kind enough to answer other questions about Samana’s unique project, from the obelisk’s connection with other prehistoric monuments in the U.K. to what they foresee as the structure’s fate in a post-apocalyptic future world. I did ask if fence-hopping or any other mildly illegal activities were involved in hunting down the obelisk, but the band declined to answer. Since Bandcamp shockingly refused to underwrite an investigative, on-the-ground report from yours truly to address this very important query, the only way to find out for sure is to buy the record, obtain the map, travel to Wales, and seek it out for yourself. Please let me know how it goes.

Rebecca Rose Harris: The obelisk is wreathed in mystery, a shape that bears great weight and significance throughout ancient history. The Ancient Egyptians used the obelisk as a symbol for the unknown, highlighting notions of eternity, consciousness and transcendence. Thousands of years later, such monumental cairns remain, as do their associations with the divine; a symbol we took great inspiration from in conducting and writing this album.

Around the time of the conception of Ascension, I had a very poignant dream, centered around a triangle of white obelisks. There was a displacement of time—the very weight of the present was unruled and unconstrained by the fabric of civilization, governed instead entirely by a natural order. In this place, the human ideology of the universe was void. I stood aloft great heights, in the center of these three white obelisks. Each embered with a pure light, resonating an invisible, silent energy. It stirred me profoundly. This triangle of obelisks were a portal to something incomprehensible. I listen intently to my dreams and translate them in acute detail every day. There resides a great power in dreams. The language of the subconscious is one I believe in, for it can lead you further than the waking parameters of senses into certain realms of understanding and communication—something tribes and ancient civilisations understand very well. This dream naturally grew into an idea, which in time led to the creation of the Ascension Obelisk.

The U.K. is home to a lot of pre-historic monuments like stone circles, burial mounds, and hill figures that many people travel far out of their way to visit. Did that history figure into your conception for this project?

Yes. Before the obelisk came about, we journeyed through Wales, hiking throughout the country to spend time in the presence of ancient monuments that are believed to have been erected for spiritual purposes. We recorded the silence in the presence of these magnificent cairns and then wove them into the natural stillness that fall between the songs on the album.

There have been vast amounts of research into the significance of prehistoric monuments and locations that were often chosen for them. Scientists have discovered time and time again that many sites of ancient significance are founded upon natural lay-way lines of electromagnetism, positively charging particles around them, a concept which inspired Nikola Tesla’s generation of alternative current though the use of the earth as an acoustic resonator. Many ancient civilizations had a deep and profound understanding of the natural world in a way that is today, all but forgotten, and so such places of worship and celebration become places of mystery. But it is this mystery that keeps us dreaming.

Your musical process is very tied to the landscape in which its created. What inspired you to go to such lengths to conceptualise your music further?

We are both polymaths, and therefore for us, a concept is a river that naturally branches off into other pathways of interpretation and representation. The force of an idea guides itself, the subconscious being its greatest aid. I find that to explore the boundaries of a concept, to step beyond its peripheries, question and then venture further again is one of the greatest ways to learn and to discover.

Were there any outside artistic influences on the project?

When it comes to the fusion of the environment and self expression, I find the works of visual artists such as Anselm Kiefer, Richard Long, Marina Abramović, and Ana Mendieta incredibly powerful. This consistent thread throughout all of their works—of being entirely present in paying the utmost attention to the ritual of the ‘process’ of creation and how that process is the art itself manifested in different mediums of preservation—is something we strongly relate to.

Was the record written with this particular planned journey in mind or did you come up with the idea for the secret map afterwards?

The two grew organically together, coupled with the dream I touched upon before.

Did you make the obelisk yourself? What are the dimensions? What does the symbol on the front signify?

It was made by stone professionals, cast out of limestone. The obelisk is just over one meter in height, with The Eternal Knot, an ancient Sanskrit symbol, gilded on its face. It represents the endless cycle of existence, the union of wisdom and method, and the symbiotic nature of ancestry and omnipresence.

How did you choose the location?

We placed the obelisk in ode to the significance that landscape had in the construction of the album. With a panoramic horizon, it offers a profound sense of peace and beauty; a place that brings a sense of reflection and restorative connection to the natural elements.

Do you check up on the obelisk regularly to make sure it is still there? Do you have any way of monitoring it at all aside from going up to see it?

We always pay the obelisk a visit whenever we are close by, reuniting ourselves with the landscape and observing the seasons’ change. There is no way of monitoring it which is how we wanted it to be. It is now at the fate of the elements and of those that behold it.

What do you think the chances are, based on the materials and the location, that the obelisk will still be standing in a post-apocalyptic future world?

It doesn’t feel like an apocalypse is all too far away, the way things are headed. It would be nice to think it’ll still be around when we humans have decided to make peace with our surroundings, but with the lifespan of limestone, anything could happen!