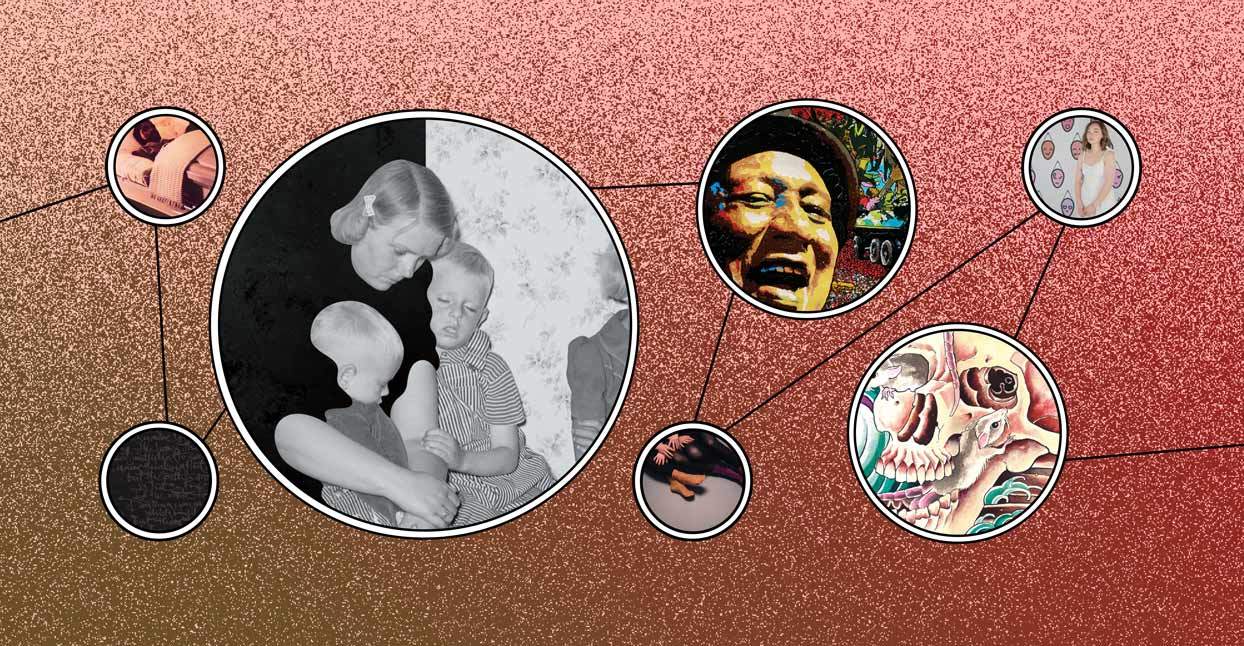 Euphoria’s a bit of of a double-sided coin. Whether spurned by drugs, dancing, daredevil stunts, hot sauce, anime body pillows, or some other factor is a moot point altogether. Once your synapses start firing away, like an overachieving college student two Adderalls deep on the night before finals; you’ve officially lost control: You’re flying, and then you’re not, and then you do it all again, on and on in an endless loop until you pass out satisfied or dead or both, yay!

It is this ravenous cycle that powers trance electronica as we understand it: a style borne from 24-hour party-people and neon flower children, unhinged delirium positioned as a path to transcendence. The new album from Berlin producer Sam Barker, Utility, takes an opposite approach to pleasure-seeking, based on what he calls “dance floor pragmatism.” There are no earth-shattering kick drums here, no laser-sharp synths or Top-40 friendly vocal hooks; instead, songs like “Posmean” and “Hedonic Treadmill” get their heady vibes from carefully-parceled rhythms and slow keyboard cascades, the makings of some wily musical micro-dosing. Well recommended for the discerning hedonist, or anyone who’s grown too old for “Sandstorm.”

Dego’s third album, Too Much, sounds like a welcome blast from the early 2000s. There are many early millenium trends that should remain in the past but the groove of that era’s R&B is not one of them. Too Much sounds like a walk down memory lane, but with modern tunes. Dego collaborated with many artists including Lady Alma and Nadine Charles, to create an album that is an vibrant mix of funk, jazz, R&B and electronic. Album opener, “A Strong Move For Truth” featuring Nadine Charles, has a groovy, smooth R&B beat with that pairs perfectly with Charles’ pristine vocals. The funky electronic track, “Unknown Faults,” serves as a musical palette cleanser about half way through the album. “Just Leave It,” with Lady Alma carries the vintage sound of the album with Alma’s silvery voice over a futuristic electro-beat. Dego’s visionary execution of Too Much makes it an genre-defying album that sounds both familiar and unexpected.

Husbandry
A Port in a Storm

The new record from NYC post-hardcore quartet Husbandry can be best summed up in four words: “Holy shit, Carina Zachary.” A Dominican-American powerhouse from the Bronx, raised on a diet of grunge, pop punk, salsa, metal, and R&B (she counts Aaliyah and Mike Patton as muses) she possesses a level of range, delivery, and tonal flexibility that’s sadly absent from much of the current scene. The effortless runs strewn across album opener “Lupus Dei,” the arched choral harmonies buttressing “Smile With Teeth,” and the forceful verses of “The Bells of St. Clements” are just a few instances of the American Idol-worthy stunners Zachary doles out across this murky, marvelous LP. Factor in the devious mathcore experimentation and proggy jams, and you’ve got a hell of a record, fueled by one hell of a voice.

The 19-year-old Oakland artist mxmtoon—maia, to her parents—is part of a growing wave of bedroom pop songwriters, a movement arguably revitalized by Frankie Cosmos that counts artists like Clairo and girl in red among its numbers. After racking up a sizable audience across the internet (an impressive 424K YouTube followers, with over four million views of her video for “Prom Dress”), she delivers the masquerade, a remarkably assured debut that showcases her talent for pairing pithy, diaristic lyrics with soft, graceful pop melodies. And while there’s often a tendency for music in this genre to be so light and airy that it practically dissolves into nothingness, mxmtoon avoids that trap with her ability to sculpt immediate hooks from even the most gossamer elements. Take album standout “seasonal depression”: what starts as a sad-eyed ukulele ballad suddenly picks up steam a minute in, turning into a frantic, fevered pop song about battling the winter blues (“I don’t like L.A./ ‘cept for tacos and Venice/ But God, I would move/ Get some rays and play tennis.”) The brisk “Suffice” could almost be a Softies outtake, with twinkling acoustic guitars and probing lyrics about her tendency to sabotage romantic relationships (“And you are just another/ that I’ll lose because I didn’t want to bother.”) And “High & Dry” is a big folky bruiser, with a see-sawing rhythm, sea-shanty accordion and slyly bobbing vocal melody. the masquerade is a confident statement from a promising new pop voice.

Susan
As I Was LP

With their breathless guitars and ever-present, rather echo-y vocal harmonies, Susan could easily be categorized as a Slumberland band. But the trio really is a perfect fit for the punk weirdos at Volar Records because, for all their sweet and jangly songs of l-u-v and friendship, Susan are also punk weirdos at heart. Sophomore release As I Was is the band’s strongest album to date, delivering guitar pop touchstones with a twist ala Leggy. The band has become more proficient songwriters and players, knocking out a series of Bleached-esque end-of-summer anthems (“Sad Eyes”)and a pitch perfect take on 80s garage rock (“Now I Know Why”) that keeps the energy high throughout the record. But it’s still the most interesting when band still revels in their more eccentric choices. Take “Cassiopeia”: a strange little post-punk number with eerie choral backing vocals, a rah-rah Go-Go’s-style chorus, and a surf-tinged guitar line that takes a leap of faith falls straight off the board. That’s rock and roll.

Ebo Taylor is an international star, responsible for bringing Ghanaian highlife music to the world in the ‘60s and creating his own unique fusion of traditional music with other African diasporic styles—jazz, funk, Afrobeat—through a many-decades-long solo career. The 83-year-old is still making new music—last year’s Yeri Ara was as bright and inventive as he’s ever been—but this EP spins us back to 1980, a “lost release” from Nigeria’s Tabansi Records, recorded on tour with his core band at that time in Tabansi’s studios but archived without release for some unknown reason. These five tracks have a bright and breezy feel, with Taylor’s arpeggiated highlife guitar and smooth voice their anchor, bright horns and flutes and organs darting in for punctuation as well as more extended interplay, West African rhythms so deft one might temporarily forget their complexity. Every time I hear highlife, I’m reminded so strongly of the West African core of Afro-Caribbean music; the Bahamas and other Caribbean islands affected by Hurricane Dorian have obviously been on my mind, and I thought a lot while listening to Palaver about enslaved people bringing their traditions with them, founding communities in which there could be strength and joy, and music’s role in anchoring people who were ripped from their homes to their ancestry.

Taylor is, of course, no stranger to that dialogue; his ‘70s work, directly leading up to this, involved collaborations with Fela Kuti and black West Indian musicians in London. And though this is music that sounds as fresh and full of light as the day it was recorded, it is not without lyrical heft; “Help Africa,” Palaver’s centerpiece, with its sharp horn line, is a beautiful call for solidarity across the liberation movements taking place across the African continent at the time. One cannot listen to Taylor’s work and appreciate his artistry without acknowledging the many ways the African diaspora is woven together, which is part of its magic. A vital treasure from the vaults, this little EP.

I’ll confess: the first thing that drew me to The Jesus Movement was the name of the artist: Vacation Bible School. For anyone who grew up in the Christian church, those three words together tend to trigger a sense of hazy nostalgia coupled with deep embarrassment: memories of puppet shows that started out fun and lighthearted but then snuck up on you with an earnest Scripture lesson in the final half; art projects involving a construction-paper Noah’s Ark atop a sea of blue felt. Once I dove into the album a bit deeper, the intrigue only increased: it was released by the excellent experimental label Illuminated Paths, and was largely made up of samples taken from the late ‘60s/early ‘70s “Jesus People” movement, a hippie-fied take on evangelicism that, for a brief moment, made its way into the mainstream. From this source material, Vacation Bible School create something eerie and unsettling—setting the words of Francis Schaeffer against churning, bleak electronics; the song “Keith Green” has no clear connection to that early Jesus music singer—instead, it’s a vast expanse of pulsing, vaporwave-y synths. Creepier still is their rework of Larry Norman’s “I Wish We’d All Been Ready,” which pushes his elfin voice far, far down into the mix, covering over it with a layer of electronics that emphasize the song’s minor-key elements; the gauzy atmospherics on “b o r n_a g a i n” serve as a kind of haunted-house backdrop for the words of preacher Lonnie Frisbee. And while the album will be catnip to anyone who grew up in this culture, by using music so glazed-over, glassy-eyed, and disturbingly serene, Vacation Bible School effectively punch up the darker, cult-like elements lurking beneath the movement’s “peace and love” surface. It’s a sneakily sinister record that’s more “ominous phantom” than “holy spirit.”