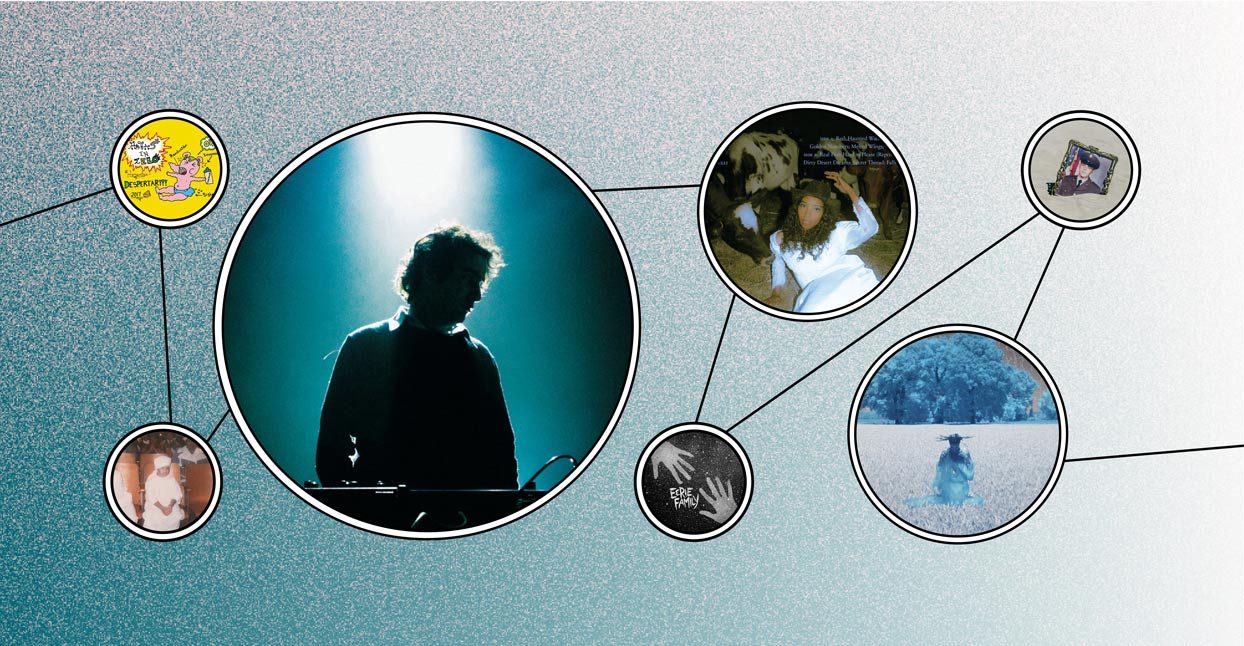 South African MC Yugen Blakrok was introduced to worldwide audiences when she was handpicked by Kendrick Lamar to feature alongside Vince Staples on the Black Panther soundtrack. It might be tempting to try to wedge a narrative about her new album, Anima Mysterium, with its dense mix of references to world mythology, human innovation, and natural wonders, into the Marvel Universe’s culturally rich and scientifically innovative Wakanda. This would do Blakrok’s gorgeous worldbuilding a massive disservice, though. This is her own vision, built upon brick by brick from 2013’s dazzling debut Return of the Astro-Goth. Her longtime DJ and producer Kanif the Jhatmaster returns alongside her, his beats even heftier and his production ever more ambient and darkly evocative. One could spend all day in the famed Library of Alexandria, that repository of ancient knowledge burnt down many centuries ago, and not be able to track all of Blakrok’s labyrinthe allusions, which she winds together into a taut flow delivered with disarming precision. She’s able to seamlessly bridge the dusty past with the dystopian present and her own imaginative Afrofuturism. Breathtaking, and genuinely individual, work.

Business of Dreams
Ripe For Anarchy

Corey Cunningham describes his Business of Dreams project as “personal music for misfits,” which summarizes perfectly the way his often sad, lonely songs traverse expansive emotional territory while remaining intensely small sounding, almost delicate in their gentle construction. Like the self-titled EP that preceded it, Ripe for Anarchy features limited instrumentation (guitar, synth, vocals, and drum machine are the key ingredients here) applied with an exceedingly gentle touch, the songs informed by Cunningham’s deep knowledge snd love for the past three decades of indiepop. The deceptively simple and melodic songs can somewhat mask the fact that Cunningham is working with some pretty dark material here, but in true indiepop fashion, Ripe for Anarchy finds hope in pessimism, joy in nonconformity, and happiness in eccentricity.

It is extremely hard to make the clarinet cool, but Angel Bat Dawid, a force of nature in Chicago’s avant-garde jazz scene, has absolutely done it. The Oracle is her first for vaunted local label International Anthem, and it feels like a modern spiritual jazz classic on first listen. (One could easily hold her work up against that of Alice Coltrane, or Yusuf Lateef, who she references directly on the opening cut, or AACM co-founder/Sun Ra Arkestra trumpeter Phil Cohran, whose Friday night performances at Edgewater restaurant Ethiopian Diamond were one of my favorite little things about living in Chicago for a long time.) She uses (her own) vocal sampling as a bed for her her beautiful, spiraling clarinet melodies on the warm “Black Family,” and intertwines sung and spoken interpretations of Dr. Margaret Burroughs’ iconic poem “What Shall I Tell My Children Who Are Black” to stunning effect. The Oracle isn’t just a statement of personal artistry, it’s a real and deep love letter to Chicago’s storied black arts community.

We could all do with a little extra space now and then. Thank heavens, then, for the debut effort by Eerie Family: a gloom-and-doom sadcore project comprising Alex Cuervo and Alyse Mervosh, formerly of Texas goth-garager band the Hex Dispensers. In a stark deviation from their ex-band’s explosive noir M.O., this record teaches a masterclass in depressive minimalism à la Carissa’s Weird, waxing spooky over a listless cloud-sea of deadpanned vocals, forlorn acoustic strums, and slackened percussion. Straightforward as Eerie Family’s arrangements might be, the wide, deep mix and cozy production contain multitudes, a dynamic contrast that’s as intoxifying as it intriguing. Who knew softness had so many shades? Or that darkness could sound so damn comfy?

Elephantine, the latest full-length from Egyptian improv auteur Maurice Louca (also of the Dwarfs of East Agouza, Lekhfa, among others) gets its name from one of the most sacred islands found along the Nile; the ancient Egyptians revered it as the home of the almighty Khnum, a ram-headed “divine potter” who beget not only the river, but man himself (if the legends are to be believed, every life begins as river clay, which ol’ Khnum proceeds to mold into what is commonly recognized as a fetus, before sticking the proverbial bun in the oven to finish baking – cool!). I can’t think of a better backdrop for these six, dazzling songs, with their tidal flow, austere fury, and worldly inspiration (the last of which is most certainly a consequence of Louca’s backing band, which features musicians from Italy, Iraq, Turkey, Sweden, and even Denmark). To that end, standouts like “The Leper” and “The Palm of a Ghost” reflect the same meticulous, organic handiwork associated with the aforementioned eidolon, with Louca et al spinning unadorned sounds into intricate, pan-African jazzscapes. Sublime stuff!

Pantheon of Me, Tia Cabral’s 2017 breakthrough as Spellling (and Bandcamp’s #4 album of that year), was a gorgeously internal record. Its abstract lyrics, and Cabral’s delirious delivery of them, felt more like half-remembered thoughts and impressions drifting through consciousness and evaporating before they took a final shape. Even the sonics—murky, aqueous synth loops that coursed and bubbled—made it feel like you were taking a slow journey, Innerspace-style, through Cabral’s bloodstream. On her follow-up, the utterly transfixing Mazy Fly, she seems to be pushing outward without compromising her beautifully unusual aesthetic vision. In place of the long ribbons of sound that defined Pantheon, Cabral opts for hiccupping, calliope-like synths that ping and whistle and pop. The whole thing feels like walking through a haunted carnival in the dead of night: the lead synth line on the beautiful “Under the Sun” spins around all wobbly, like a merry-go-round that has jumped its circular track; the white-hot electronic ripples running up the back of “Dirty Desert Dreams” are almost Arthurian in their medieval majesty. Lyrically she pushes outward, too; “Haunted Water” playfully nicks the “Hands across the water” section of Paul McCartney’s “Uncle Albert/Admiral Halsey”; “Real Fun” name-checks Billie Holiday, “Billy Jean,” “Raspberry Beret,” and “Yellow Submarine.” And while the meaning of the lyrics remains wonderfully obtuse, trying too hard to parse Mazy Fly is beside the point. Like the rusty gate outside an old haunted house, all you’re supposed to do is pry it open, and follow wherever the winding road leads you.

My first exposure to Ratas en Zelo is when they took the stage midway through a jam-packed afternoon lineup at Brooklyn’s annual Latinx punk fest—one of my favorite musical events of the year. After band after band delivering one crust-y guitar riff after another, I was sort of floored when I realized that Ratas’ lineup was drums, bass, and…accordion? No matter: the band to rip through a 30-minute set so breathless and nervy that I navigated to Bandcamp on my phone and bought Despertar while they were still playing. The group’s debut LP does a good job of showcasing all of the things that make them so winning: La Yadee’s cutting, sneering vocals, the joyous, gang-shouted choruses, and those wild, springy accordion lines courtesy of La Hiromy that ping-pong all over the center of the songs. I don’t know if this is intentional, but centering their songs on accordion melodies recalls the classic sound of norteno music, drawing a hard line between present and past. And while I may not be able to understand every lyric in “Policía,” for example, the urgency with which the band plays and delivers the song makes its intention abundantly clear.