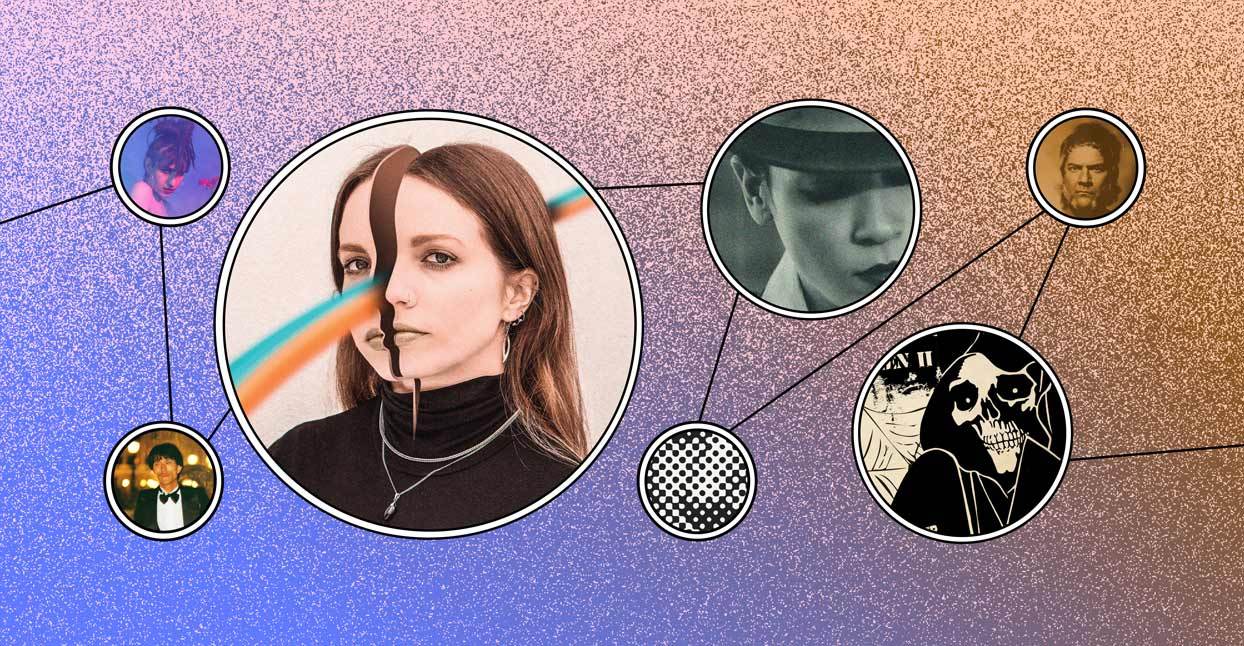 Aquarian Blood
A Love That Leads To War

When Aquarian Blood first appeared two years ago with their full-length, Last Nite in Paradise, they sounded as if someone had thrown a bunch of guitars and a keyboard in a blender, pressed “puree,” and started shrieking over top of the din. That album was a madcap batch of deranged carnival punk, every song shrouded in haunted-castle reverb. Anyone expecting more of the same for round two, however, are in for a shock: the first sound on A Love that Leads to War is an acoustic guitar plucking out a minor chord, followed closely by J.B. and Laura Horrell—the married couple at the group’s core—singing a grim, hushed melody. War is a somber, baleful record that has all of the muted, graveside tones of pagan folk—sonically, it’s a close cousin to the records made by Emma Ruth Rundle and Jaye Jayle—and the new setting suits them. J.B. and Laura both have low, deeper voices, and they blend beautifully, disappearing entirely into one another on songs like the ruminative “Hidden Away,” and drifting gently above strummed guitars on “Dogs In My Mouth.” Even a song like “Landscape Strange,” which spikes the punch with squelching keys, a drum machine, and some out-of-tune slack-key guitar, has the deliberate, moody tone of an elegy. The music brightens briefly for the lullaby-like title track, which appears late in the album, but even that song has death at its core: “Must be disappointing after the end is here/ the lights finally go out for good, the gates never appear.” In just two albums, Aquarian Blood have gone from the playground to the grave.

In our interview with Sepehr Mashiahof, A.K.A. The Bedroom Witch, around her last album, Injury, the electronic producer and songwriter was clear that her synth-pop was made for healing personal and collective trauma, the experience of finding like-minded souls while dancing in the dark. On her latest, Diaspora, Mashiahof looks toward generational displacement, too. The Iranian-American artist imagines her ancestors looking after her across space and time, using swirling synths and pinging beats to background surreal, sweeping, mythical lyrical imagery. (Mashiahof’s always had an ear for keen pop songwriting and has always drawn clearly from the electro-goth ‘80s.) Ghosts speak from beyond on “Grieving Spell,” the parallel between necessary change and survival is drawn on “Shapeshifter,” and Mashiahof conjures her body from a swarm in “Sea of Insects.”

There is a sense of lightness and of possibility on much of Diaspora, though, a genuine sweetness that lingers; for as much as Mashiahof sings of loneliness and alienation, it’s clear that her quest to heal through music is working, and that making her connection to her ancestors so explicit also brings into greater relief her connection to others she can see and touch today. (The tender “Capricorn” in particular bears this out, as do “She Told Me She Feels Alone” and the poignant closer, “I’ll Never See Them Dance Again.”) I’m big on the transcendent possibilities of pop, and Mashiahof’s ability to create catchy songs that speak on multiple levels at once is a gift.

Imani Coppola has been releasing eclectic music for nearly two decades. Her 1997 debut single, “Legends of a Cowgirl,” reached the top 40 on the Billboard Hot 100 list the year it was released. Her most recent album, The Protagonist runs the gamut of genres—folk, soul, and ‘80s lite rock all make an appearance. Coppola’s album opener, “Blackteria”is darkly funny—you can almost her grinning as she sings over the folksy guitar strings. “We don’t want a civil war but we got one coming for sure,” she slyly sings. Another standout is “SAMO,” an ode to the late artist Jean-Michel Basquiat and also serves as a musical walk down memory lane of the New York of the ‘80s and ‘90s. Coppola urges listeners to “Fall in love with the future,” on hopeful ending tune, “Good Day Good Night”—a majestic glam rock song that is extremely catchy. On The Protagonist, Coppola is clear that she writes and sings what she damn well pleases.

On the opening track of her new album The Pale Queen, London-based, Canadian-born singer Rhi repeats the phrase, “I’m a grunger, grunger, grunger, baby.” She’s definitely not talking about her music (and the rest of the lyrics make that plain); The Pale Queen offers a dozen woozy, R&B-informed songs that drift along at the unhurried pace of a springtime daydream. Synths are plentiful, pouring into every open space, and the tempos are muted—think of the slower songs that emerged during the heyday of Massive Attack and Portishead—or even Cassie’s “Me & U”—and you’re on the right track. Throughout, Rhi cannily plays her voice against the creeping rhythm tracks—in “Swagger,” she times syllables to line up with the downbeat; in “Mesmerized,” she mirrors its hopscotch cadence. In “Droned,” Rhi’s vocal melody feels like one long exhale, single notes breathily stretched out over whole stanzas. There’s a soft, calming glow hanging over everything; even songs like “Call Me,” where the rhythm stutter-steps, are bathed in pinkish synths and gently coaxed along by Rhi’s understated alto. The Pale Queen is quiet electro-soul, made for speed, but luxuriance.

Yukihiro Takahashi’s 1978 debut solo album Saravah! obviously doesn’t qualify as a “new release” in the traditional sense, but considering how the record wasn’t available outside Japan before this week’s WeWantSounds reissue, it might as well be. Recorded on the heels of Takahashi’s enlistment in the almighty YMO (who laid down their legendary debut just a month after these sessions), Saravah! is a sophisticated exercise in club-ready cultural diffusion, drawing connections between French and Italian exotica, bossa nova, disco, funk, and of course, Tokyo-style city pop. Perhaps a bit ironically for a solo album, collaborations play a central role in the experience. Takahashi’s YMO bandmates, Ryuichi Sakamoto and Haruomi Hosono, supplement their cohort’s globally-inspired grandeur with luxuriant string arrangements (the title track) and masterful horn sections (“Elastic Dummy; session guitarist Shigeru Suzuki carries album highlight “La Rosa” more or less on his own, his silvery funk riffs serving as the lynchpin. The internet may have demolished music’s stylistic and cultural barriers for good, but Takahashi gets credit for being one of the first to bring out the wrecking ball.

Another Spooky Friday, another spooky release — and this one’s for the punks. If moshy monster mashes by classic bands are your thing, the second installment of Cleopatra Records’ “Punk Rock Halloween” series should do the trick (or treat). The Vandals, the Casualties, Reagan Youth, the Vibrators, Pulley, and MDC are just a few of the legends heard on the 28-track comp, which consists entirely of all-new, deeply-haunted, fun-sized studio cuts. You’ve got your party tracks (Reagan Youth’s “(It’s A) Monster’s Holiday,” Tsunami Bomb’s “Dead Man’s Party), your covers (Splinter’s take on Warren Zevon’s “Werewolves In London,” Starving Wolves’ “The Number of the Beast”), your supernatural oddities (“Return of The Ghost Of Johnny Ramone”); the only thing missing is the ode to killer clowns (an odd exclusion, given how killer clowns are punk as fuck). Then again, with names and riffs as good and ghoulish as these, who the hell am I to complain?

Released last month without much fanfare, at least in the United States (the release show is being held at a 1,000+ capacity venue in Paris), Shannon Wright’s Providence is a somber entry in the artist’s ever-growing discography. Consisting of tracks made up almost exclusively of vocals and piano, the record is objectively beautiful and more than a little brave in its minimalism. There’s not much room for error when the sonic landscape is otherwise so bare, but Wright has always been a fearless excavator of her inner rooms. Though you’ll miss the guitar (no one plays guitar like Shannon Wright,) the sophisticated loveliness and melodic tension created and sustained within these lonely ballads, aided by Wright’s whispery vocals, cuts as deeply and inevitably as encroaching winter chill.