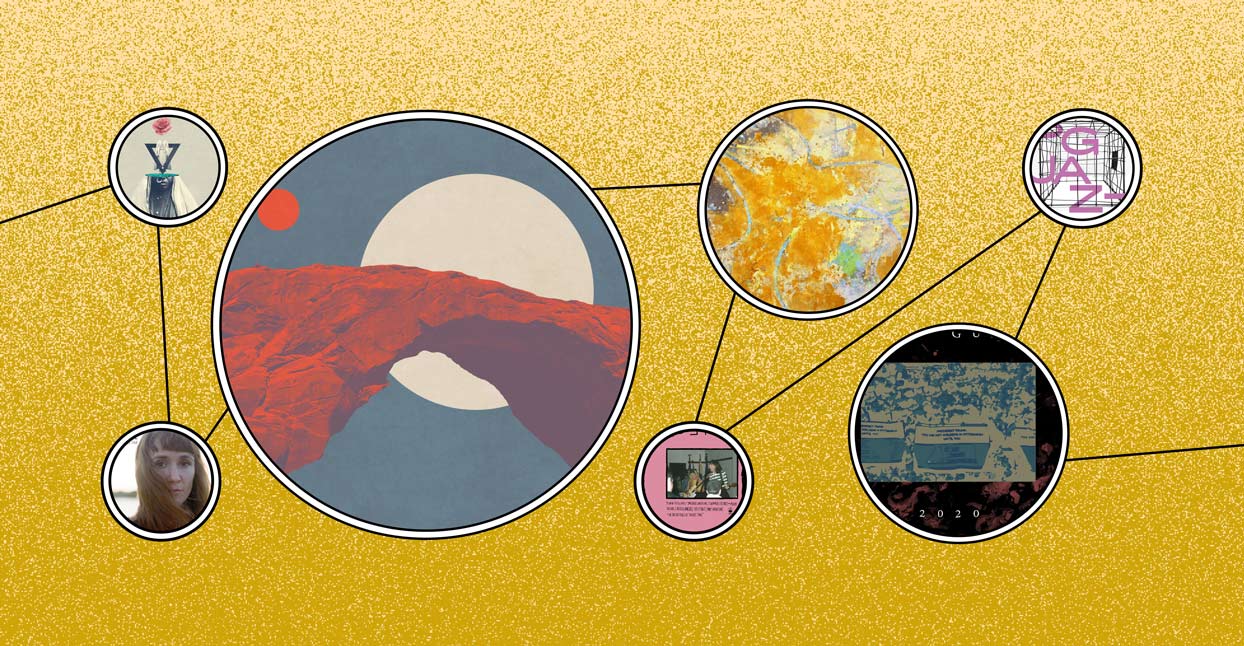 The Montreal outfit Bodywash specialize in “cream pop:” a tantalizing, self-coined indulgence which more or less translates to dream pop that’s packing a little extra baby fat. Whereas most groups of their ilk make synths their primary musical weapon, the young five-piece, who met in the music room of a McGill University dorm in 2014, trade in thick, tremulous guitar riffs that bring the subgenre’s fever-dream energy closer to earth; gauzy keyboards and hazy effects still linger in the mix, but as extensions of the lush, layered jams themselves. This stylistic tango between the ethereal and the immediate makes Bodywash’s Luminelle debut Comforter a refreshing change of pace for dream-pop fans who’ve grown weary of the ol’ “Just copy Beach House!” Method. This one’s best as a linear listen, but “With Heat” and “Eye to Eye” are great places to start if you’re looking for an idea of their chill approach to chug.

Close Talker
How Do We Stay Here?

While we’re on the topic of up-and-coming Canadian groups: for a lesson in well-constructed indie pop, you’re going to want to add the new Close Talker record to your collection ASAP. On their new effort How Do We Stay Here?, the Saskatoon trio approach big-tent praxis from a holistic, humbled perspective. It’s a self-produced LP rooted in intuition and technique, as opposed to concepts or trends. Songs like “Half Past Nine” and “The Change It Brings” exude organic ease with their velveted tenor melodies and bristling, interlocking guitars; the synth-heavy cuts, such as early-half highlight “Arm’s Length,” play out just as effortlessly, thanks to the pragmatic production and immediate arrangements. Catchy, reliable, coherent — what’s not to love?

Esther Rose
You Made It This Far

Esther Rose’s sophomore album, You Made It This Far, is bitingly honest. Written while Rose was between New Mexico and her home in New Orleans, the album lays her heartbreak bare. Opener “Always Changing” starts deceptively slow with a steady acoustic guitar until it heightens towards the end as Rose sadly sings, “Can’t you feel he’s changing.” The track “Sex and Magic,” is a delightfully dark love song where Rose’s soft voice and the notes of fiddle make a good marriage. On the title track, Rose repeats, “Getting over yourself can be hard, oh but you’ve made it this far,” over Americana guitar notes. Throughout You Made It This Far, Rose’s voice and lyrics are direct and plain spoken and the album plays like a long-distance catch-up call with a faraway friend due to Rose’s delivery. Sit back and let Rose’s melodies soothe you like an old friend.

Portland outfit Mope Grooves make the sort of unclassifiable post-punk that flourished from the mid ‘80s through the mid ‘90s, just off the radar. You might have found it on college radio, but it wasn’t the kind of thing that charted. It was as if a bunch of different people, who had never heard a punk song directly, had been tasked with taking punk in a new direction with just a description of its ethos and aesthetic to go on. Endless interpretations of what the channeling of agitation into music could be, in essence.

Desire is Mope Grooves’ fourth record; over their oeuvre, they’ve established that their particular interpretation of a new punk direction is a sort of charmingly disorienting, heavily rhythmic pop, with monotone lyrics both oblique and direct. Wheezing synths and chiming Fender Rhodes help provide melodic lines. As a whole, a Mope Grooves song is a lot like a human body—familiar but distinct, in perpetual flux and balance, with components that seem bizarre if not considered as part of the whole—and the rhythms on Desire have the irregular lope of breath, gait, growth, and blood pressure, too. (See opener—and clear standout—”Turn to Glass,” where a synth drone rising from a minimal rhythm breaks the song open at about the 1:30 mark, or “Pictures of the Moon,” with its heartbeat-handclap chug and oddly delicate keys.) It sounds loose, but it’s magnificently complex.

On his excellent album The Distance, released in March, Kentucky producer Dr. Dundiff channeled the sound of late ‘90s Philadelphia, when jazz and soul were beginning to mingle with hip-hop in era-defining records by The Roots, Jill Scott, and others. On his latest project, with the group SGJAZZ, that sound remains at the fore, but the approach to construction has changed. The members of the group assembled in Dundiff’s studio, Rhodes player Idris Frederick recorded a series of chord progressions that Dundiff then chopped up an re-assembled, and the rest of the band added their parts to the new arrangements. What emerged from these sessions isn’t a frenetic, cut-up excursion marked by showy production tricks, though; instead, SGJAZZ is irresistibly lithe and smooth, a blend of smoky neo-soul and sparkling jazz that goes down easy and begs for repeated listens. The start-stop stutter of “Monday,” with its twinkling vibraphones, could be an instrumental outtake from Do You Want More?!!!??!, and J. Lamotta’s breathy, winding vocal on “Make Me Feel” beautifully offsets the rhythm section’s hectic hustle. “Like Glue” puts the Rhodes front and center, surrounding it with gentle wah-wah guitar and undergirding it with a bassline that pops like kernels in a pan of oil. There’s an effortlessness to the songs on SGJAZZ that makes the whole thing feel open and welcoming, and a deft musicianship that make these sweet jazz excursions sparkle with light and life.

Saxophones, spoken-word soliloquies, and happy-go-lucky melodies? In MY screamo? There’s a first time for everything: 2020, from the Pittsburgh foursome Shin Guard, is skramz like you’ve never heard it before. First, you can actually make out what the vocalists are actually saying (er, screaming), which—coming from a scene that claims cathartic lyrics as a defining trait, only to bury said confessionals beneath histrionic sputtering and studio noise—is a huge fucking plus. Second, the varied approaches to vocals (rapping, singing, soliloquizing), style (post-hardcore, jazz, pop punk), structure (ambient entr’actes, varying song lengths), heard throughout ensures that each song retains its own identity, while simultaneously reinforcing the dynamic insanity of the product as a whole. Third, they can fuel the pit and dish out bon mots as the same damn time, as evidenced by the opening lines of the cocksure pit-starter “Kennedy” (“Rose Marie, you were conceived by billionaires who spat on your gold-plated silverware…”) Fourth, it’s a screamo album—with saxophones in it!—which ends with abusers getting raked over the coals in a giddy display of violence, pit-starter doubling as effigy (“You Will Be Held Accountable For Your Actions”). I could keep going, but hopefully you get the point: 2020 is the future, y’all.

Sinner’s Syndrome, by the Athens, Greece-based producer Moderator, takes place in a world lit by gaslight. Every single track on this noir-hop opus has a kind of Raymond Chandler sense of mystery to it—the feel of city streets slick with rain at 3am, of long shadows cast down dark alleys, of cigarette smoke curling into grey halos in seedy 1950s New York City bars. “Burning Bridges” is the kind of burned-out, slowed-down soul loop that Portishead might have mined for their first record, a fat bassline strutting beneath an unsettling vocal that’s been pitched and slowed down so low it sounds like the world’s saddest phantom singing at the Club Silenco. The mood is enhanced by the fact that Moderator buries spoken-word samples from what sound like old Twilight Zone episodes and ‘50s B-grade mysteries deep beneath the imposing beats—decontextualized like this, they become urgent snippets of conversation whose meaning is opaque. A big, surfy guitar lead wanders through plinking keys and a cavernous bass rhythm on “Sweet Curse” before the song is torn in two by a wailing saxophone. “The Scene of the Crime” opens with the sound of crickets and the voice of Alfred Hitchcock before transforming into a booming rework of Dinah Shore’s 1959 song of the same name, punching up the drums but retaining the wiry guitar lead. “Zombie Girl” is a bit of swinging bachelor-pad music built around another Dick Dale-style lead. Sinner’s Syndrome is the kind of record that shuts down the entire world around you and yanks you into its midnight wonderland. Refusing its call is futile.