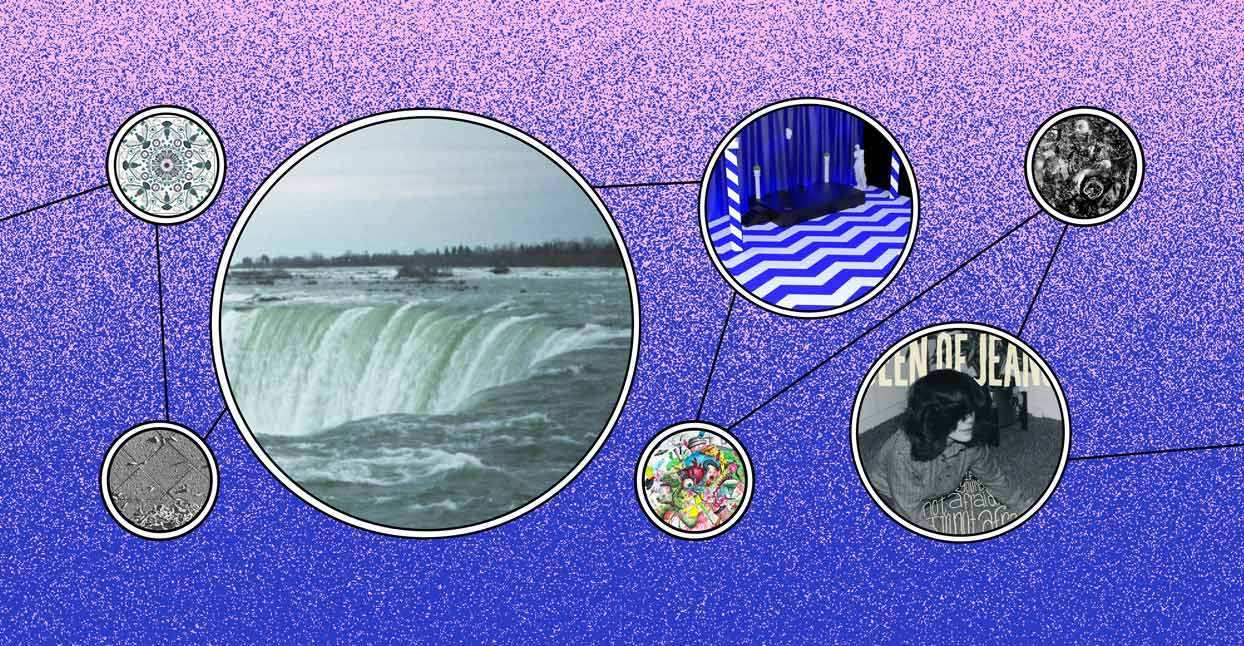 The Los Angeles label Doom Trip is on a hell of a winning streak. In just two short years, their Doom Mix compilations have established themselves as crucial documents of the burgeoning experimental electronic scene, and full-lengths by artists like Pale Spring and the forthcoming album from Mukqs prove the label is not afraid to embrace both the more sanguine and the more confrontational ends of the spectrum. The riveting new album from CDX (Tim Thornton from Tiger Village) falls somewhere in between. The Twin-Peaks-referencing cover art (which I’ve taken to affectionately calling “The Blue Lodge”) is something of a feint—little of Lion Cuts resembles Angelo Badalamenti’s score for that series. Instead, Thornton dishes out tracks that run from bouncy and squelching (“Twenty Two II”) to shuffling and trance-y (“Rose Gold Relationship Goals”). He manages to make all of it work; “Pet Names” is refracted surrealism at its finest—shards of synths sounding like broken glass shattering against a sturdy bass melody, while “Tiger Breaks” is almost Balearic in its rippling, expansive beauty, and “60.90 III” has all the pulse and neon-like energy of a low-wattage rave track. Like Doom Trip itself, Lion Cuts is home to a multitude of electronic sounds. As the Man From Another Place might say, “Let’s rock.”

Ghost Funk Orchestra’s A Song for Paul is a dazzling experimental jazz record. The New York-based collective describes their sound as “blurring the line between soul and psychedelic,” and that rings true on A Song for Paul. Dedicated to group founder Seth Applebaum’s grandfather, the album opens with the soft, yet dizzying “Intro”. Elsewhere “Walk Like a Motherfucker,” is a groovy, old-school-sounding with blazing horns track that harkens back to the psychedelic music of the past. The titular song is a Latin-jazz influenced track with steady drums and piano. The closing “Outro” leaves listeners with an ambient track filled with muted guitar notes. Ghost Funk Orchestra is making music on their own terms and A Song for Paul is a solid entry point to their sound.

Modern Nature
How to Live

Whenever the end of summer rolls around, no matter how hot it is outside, I develop a fierce hankering for folk rock: the pastoral acoustics and spacious arrangements, the heavenly-sung melodies, and most of all, its omnipresent comfiness. How to Live, the debut album from rising British band Modern Nature—which includes Jack Cooper of Ultimate Painting (RIP), Will Young of Beak>, Aaron Neveu of Woods, and Jeff Tobias of Sunwatchers, among others—not only encapsulates everything I love about the subgenre, but re-invigorates it, with occasional nods to hard rock (“Nature”), experimental electronica (“Peradam”), and even kraut (“Footsteps”). Saxophone and cello co-mingle with motoriks, field recordings, and stoner fuzz, as limber grooves flutter about the mix, aloft like the pigeons on the cover art. It might be hot as hell outside, but hey — it’s never too early for some sweater-weather listening.

Queen of Jeans
If You’re Not Afraid, I’m Not afraid

The excellent new album from the Philadelphia group Queen of Jeans begins with a slow build: first, a tense guitar phrase, twitching against empty air. Then, we hear Miriam Devora’s feathery voice; a pulse of percussion, a dusting of synths, all entering one by one like actors joining an ensemble on stage. What’s remarkable, though, is that song never stops building—layer upon layer is added until you hit the big, joyous final crescendo three minutes in. That kind of deliberation is a good indication of what’s to come: throughout if you’re not afraid, Queen of Jeans pay close attention to the details. The pounding “All the Same” goes from commanding, stomping verses to a sudden chorus consisting of nothing more than Devora’s voice and guitar; “On Your Shoulder” is a measured, heaving number that recalls Sharon Van Etten at her most heartbreaking. Previous Queen of Jeans records netted curious critical comparisons to ‘60s pop, but (if they were ever there at all) those reference points don’t turn up here. Instead, the group opt for luxuriantly crafted guitar pop. The chords all ring out in soft-focus—like someone smearing vaseline on a camera lens—quietly pillowing out into all available space. Devora’s voice is alternately aching and determined. Lyrically, the album grapples with both dissolving relationships and the passing of Devora’s mother. But with each peak and crescendo, it becomes clear that giving up is not an option Devora is even close to considering.

Those Aussies have done it again! Arriving hot on the heels of their fantastic debut album A Laughing Death In Meatspace—one of my personal favorites of 2018!—Braindrops is the latest from Tropical Fuck Storm, the aptly-named band co-helmed by Gareth Liddiard and Fiona Kitschin of the Drones. It’s a fucking doozy, perhaps even more so than its predecessor — and keep in mind, this is coming from a band known for slinging tales of Soviet chess machines, shellfish-related conspiracy theories, and “antimatter animals.” Consider the tremulous guitar riff leading off album opener “Paradise” a facsimile for the record’s sun-poisoned strain of dadaist pop: an prolonged, paranoid sirens’ song peppered with references to Pokémon, Eugene Leary, global warming, and leg-humping dogs. Highlights include “The Happiest Guy Around,” a rowdy cut that, with its chattered vocals and ebullient energy, recalls a Beegees simulation gone awry; and the bristling title track, a sprightly, staccato race against the doomsday clock.

There’s a good reason for 0 EMISSIONS’ epic (nearly two-hour!) length: it is actually five albums for the price of one. The album collects all of the tracks from the rapper and producer born Edwin Liddie Jr.’s five-part series of the same name, which were originally released in 2016. And while its length is daunting, it’s the perfect showcase for zeroh’s all-consuming production style—from the gentle, jazz-guitar-driven “Drypsy” to the menacing, claustrophobic “Fried Eye 4 the Gemini,” with its giant wall of samples and gymnastic rhymes from Versis. The Low End Theory style of experimentalism clearly informs his overall aesthetic, but everything here sounds like a more dystopic take on the kind of scuffed-up, sample-based production that defined the genre’s early days; listen to the way he slows down the sample in the background of “Resolutionary Pt. II” until it oozes like spilled molasses, topping it with a similarly woozy verse. “SVG.LVR,” featuring a poem by Low Leaf that contains as many tantalizing pauses as it does words, is a kind of kaleidoscopic dream, 50 different layers of sound blurring into one behind the words. The best way to consume 0 EMISSIONS is just to submerge yourself in it, and allow the skipping rhymes on “Beast Boy” to be suddenly demolished by the atomic blast of bass in “Before the Flood.” Though it may have originally been released in installments, 0 EMISSIONS is a journey taken all at once, from start to finish.

“Can’t get to heaven with a three chord song,” goes the chorus of an old Sleater-Kinney tune from nearly twenty years ago, but the enduring magic of three chords going around and around is the bell, book, and candle of UV-TV’s energetic, bright-eyed pop-punk. On their 2016 debut, the stellar Glass, the band wound myriad influences—shoegaze, garage, and post-punk chief among them—into knotty balls of catchy melodic guitar rock topped with bassist and vocalist Rose Vastola’s lyrical search for peace and quiet in a fragmented world. On sophomore release Happy, the band takes a sharp shambolic turn into breathlessly fast Black Tambourine territory, turning their amps up while unspooling their tight riffs into big, springy coils of sound. The youthful confusion, however, remains the same: “You’re always upside down, I’m always inside out,” sings Vastola on “Inside Out” while the drums skitter and skate along behind her, a non-stop game of catch up for a band on their way to the top.